In search of history to inspire rural rejuvenation

The national strategy to drive integrated, high-quality development in the Yangtze River Delta provinces of Anhui, Jiangsu, Zhejiang and the city of Shanghai includes plans to rejuvenate rural areas.

Rural areas in the region have long prospered from the fertility of delta soil and the crisscrossing networks of waterways. Watertowns and villages have developed their own distinctive personalities.

This series takes a closer look at a 2,413-square-kilometer rural demonstration zone that includes Qingpu District in Shanghai, Wujiang District in Suzhou in Jiangsu Province, and Jiashan County in Zhejiang Province. 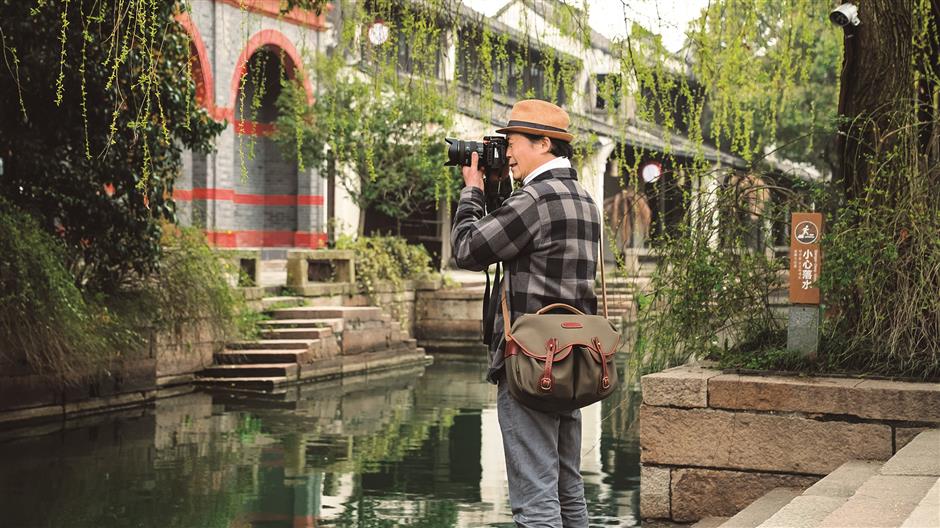 Deke Erh is on a field research in Lili.

Chinese photojournalist Deke Erh, a Shanghai native, has been documenting life in the rural Yangtze River Delta for decades, developing ideas about how areas in the region can be rejuvenated without destroying their natural charm.

Erh, who began photographing historical Shanghai architecture in the early 1980s when not many people realized the significance in preserving the past, lives in a traditional Chinese-style home in Jinze, a watertown in suburban Shanghai’s Qingpu District. 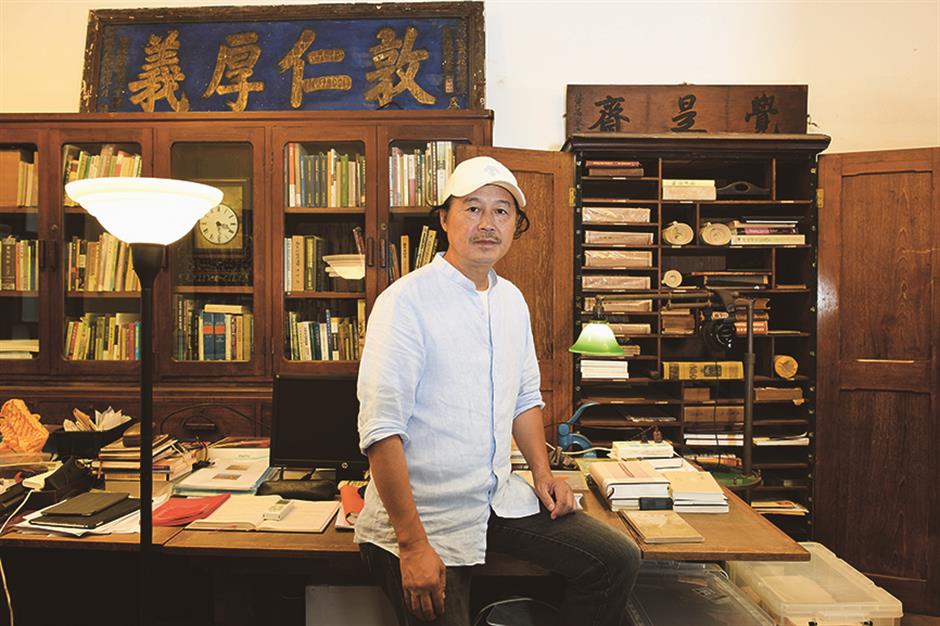 Erh at his home in Jinze, Qingpu

On a typical day, he drives 30 minutes to Lili, a watertown in the Wujiang area of Jiangsu Province to document oral history.

He is also thinking about setting up a narrative workshop in the watertown of Jiashan in nearby Zhejiang Province.

In Lili, on a cloudy Monday afternoon, Erh greeted Shanghai Daily writers in his spacious study. It came after he had just been talking with local Li Weifeng, 43, whose forefathers were famous for making pidan, a variety of preserved eggs. 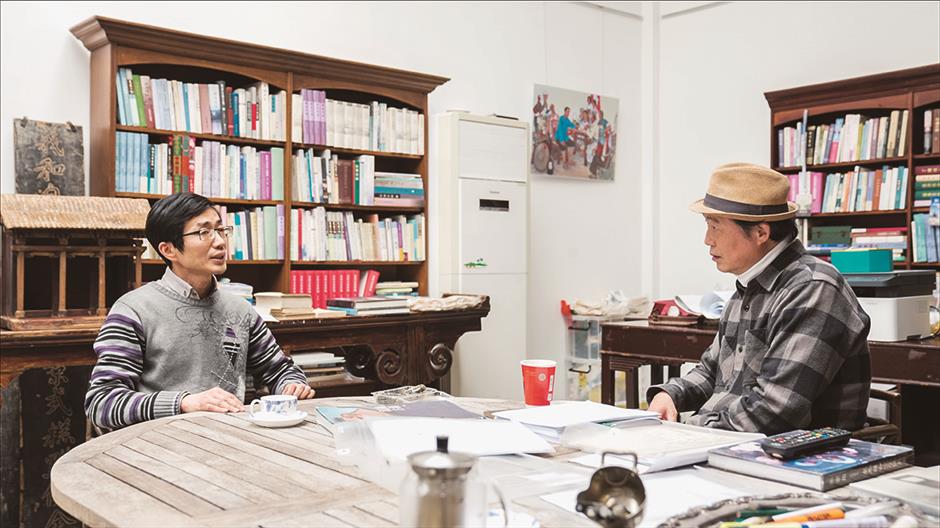 At his oral history documentation workshop in Lili, a watertown in Suzhou, Deke Erh (right) talks with Li Weifeng, whose forefathers were pidan makers.

The eggs and malt sugar were once the two most important businesses in the area.

No more. Instead of carrying on the family’s pidan business, Li now operates a coffee shop in the ancient town.

“I am feeling a bit depressed,” Erh told Shanghai Daily, “because the two most important local industries have ceased to exist.”

Erh said he suggested to Li that he sell the still-popular preserved eggs in his shop as a sideline.

“It is my belief that pidan would sell better than coffee,” Erh said. “When tourists stop there, homemade pidan and the story behind the eggs would certainly intrigue them.”

Erh’s involvement with rural towns dates back about 30 years, when he was engaged in writing a book entitled “Ancient Towns in the South.”

About 12 years ago, he produced the oral history documentary book “Deke Erh and the 108 Teahouse Customers,” made from field studies in the Qingpu watertown of Zhujiajiao.

Conducting field study like these, by resorting to social and anthropological methodology, is not Erh’s own invention. Pioneering sociologist Fei Xiaotong (1910-2005) did exemplary work in the field.

“Fei’s hometown was not far from here. In the summer of 1936, his monthlong studies in Kaixuangong Village in Wujiang led to his work ‘Peasant Life in China.’ This was nothing short of pioneering work in the sociological and anthropological field studies,” Erh said.

Erh explained that previously such studies in the West were predominantly about the examination of a primitive society, such as African tribes or a society yet affected by industrialization, usually conducted by scholars from an economically developed society.

Erh himself has been to some mountain villages with no access to electricity, where oil lamps and candles were still used. “Coming as I did from an economically advantaged area, my visit somewhat gave the impression of novelty-seeking,” Erh recalled.

Now Fei’s greatest contribution lies in that, unlike his Western counterparts, he turned his attention to areas just south of the Yangtze River, where the abundance of water, fishing and rice cultivation comprised a region said to be “flowing with milk and honey.” 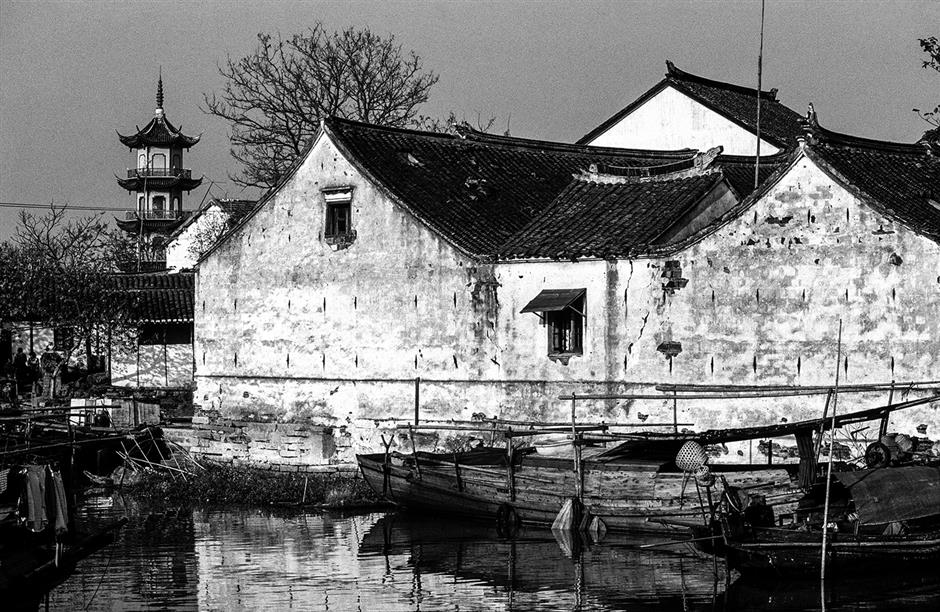 Zhenze ancient town in the 1980s

According to Erh, this is the proper context in which any discussion about the Yangtze River Delta integration or the south China culture should proceed.

He explained that findings in this highly developed area is significant because the best practice here could be copied in underdeveloped regions.

Erh’s involvement with the region familiarized him with expressions related to social mores of the region — like yibei tianxia, or “to clothe and keep the multitudes warm,” in an area known for silkworm cultivation and textiles, and “viewing the moonlight as sunshine,” which refers to locals particularly known for their industriousness.

Local people are also known for their broadmindedness which enables them to embrace the outside world. 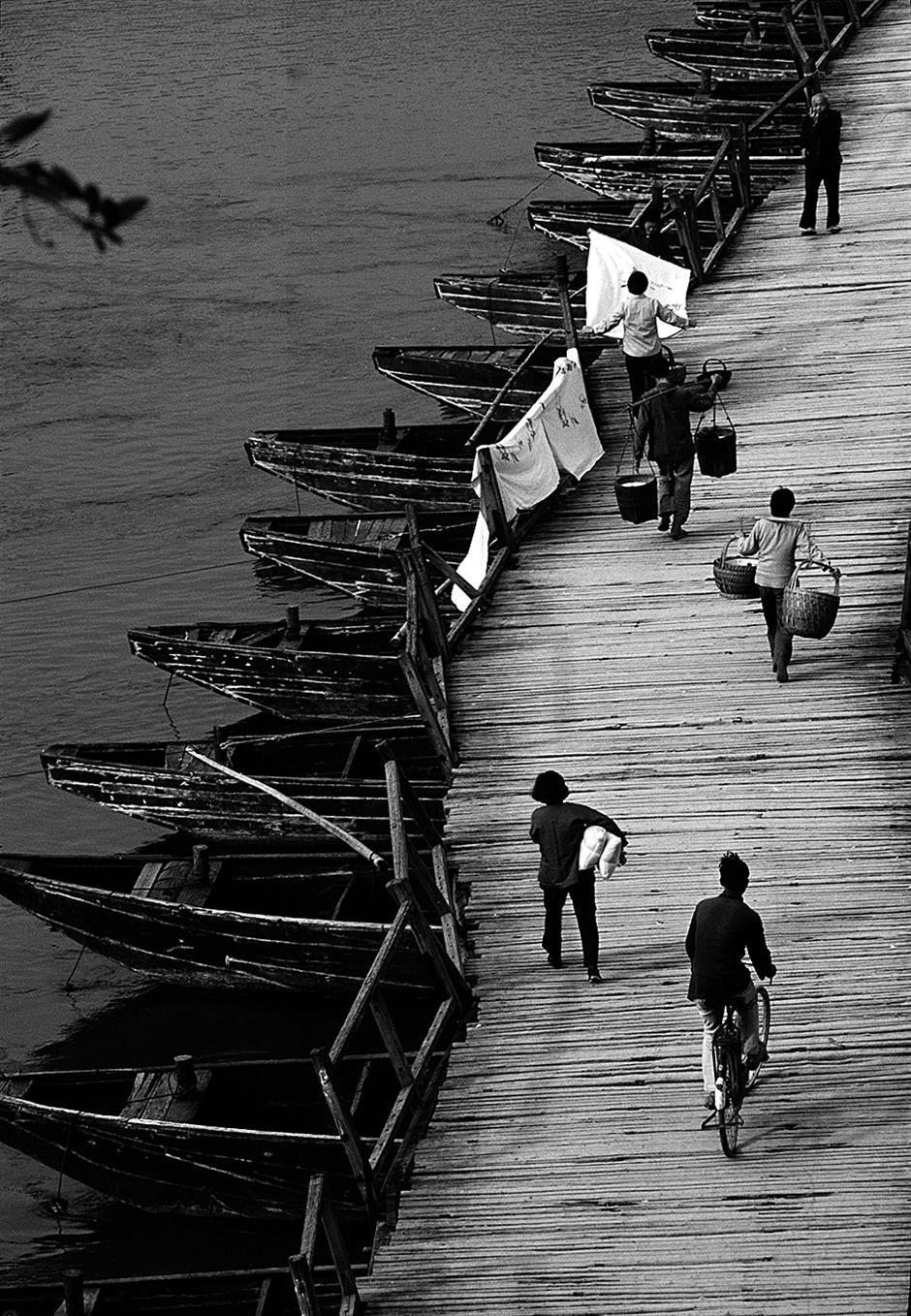 Given their readiness to communicate with the outside world, Erh believed that the connectedness of the delta region could be studied from a historical perspective.

Recently in Jinze, Erh gave a lecture on Zhao Mengfu (1254-1322), a famed calligrapher, painter and poet in the late Song and early Yuan dynasties.

Historical documents suggest that Zhao would often accompany his wife on boat trips to her maternal home, leaving behind a trail of calligraphy, paintings and poems.

Erh visited Xiaozheng and the museum in Huzhou, trying to comb through the legacy of this cultural icon from a historio-cultural perspective.

When China launched reforms and opening-up at the end of the 1970s, rural village industries in the region were already known for their innovative entrepreneurship and vigor. That spirit has not diminished with time.

Erh’s field studies in the many villages in the region keep him in intimate contact with local villagers, convincing him that a nuanced approach is needed in rural rejuvenation.

One of his more recent oral history documentation efforts includes Lianhu, one of nine Shanghai demonstration villages in the city’s rural rejuvenation program.

“I set up a workshop there to do a case study on a natural village lying on the periphery of a modern metropolis, to see how it interfaces with modern life,” Erh said.

Through interviews with locals, Erh found himself awed by the harmonious relationships between villagers and nature, and between the past and present.

A tiny temple housing the village god sits at the entrance to the village, while the village cemetery is just a short distance away.

“One thing about the greatness of the Chinese nation lies in our long history dating back to time immemorial,” Erh said. “Local rituals give rise to ceremonies, music, dancing and myriad other cultural expressions, significantly enriching spiritual life.”

While Erh expects his work at Lianhu to be wrapped up in a matter of months, his involvement in the town of Lili will stretch longer.

Lili is home to the “eight great households,” which gives rise to a trove of stories passed down from generation to generation.

“It is not an easy job to coax people to tell their stories,” he said. “You need to befriend them first to get them to open up.”

He has already recorded stories from locals whose ancestors operated pawnshops or made coffins.

Unlike a typical success story that begins with humble rural beginnings and ends in urban prosperity, Erh’s interest seems to move in the opposite direction.

“If we turn back the clock, Shanghai experienced a period of prosperity in the 1920s and 1930s, with all the so-called architectural museums, exotic mansions and buildings along the Huangpu River and the Suzhou Creek that got built about a century ago,” he said.

In some of the previous historical narratives, these edifices amount to part of the Western influence contributory to the city’s greatness, and this was exactly how Erh felt about when he was young. “I was absorbed in it, and this led to more than 50 books I wrote about the clashes between Eastern and Western civilizations.”

But in the past decade, Erh has experienced a sort of metamorphosis.

“How did Shanghai attain such greatness, and why did the city undergo such a huge change in such a short time?” he asked rhetorically.

His answer: the city’s proximity to a rural region of affluence and culture.

“Getting fed in this rural area has never been a big problem,” he said. “Easy access to the necessities of life was instrumental in giving rise to a high degree of cultural sophistication.” 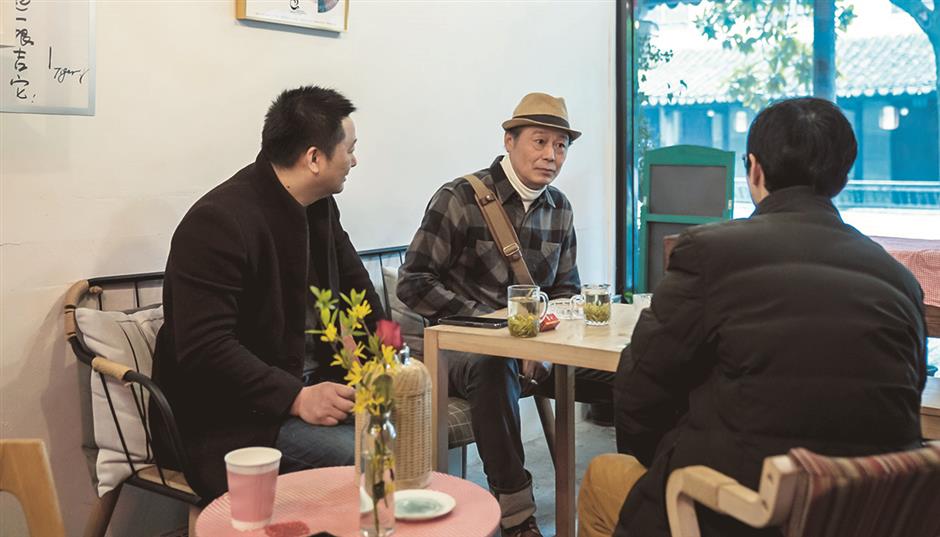 Erh (center) chats with customers at a coffee shop in Lili.

He went on to explain, “If we compare Shanghai to a big tree, then its root system extends to the soils of neighboring Zhejiang and Jiangsu provinces.”

Thus, a well-educated villager could end up easily getting a job in Shanghai, but Erh said he hopes that is a two-way traffic.

He points to the construction of a new center in Jinze by information and telecom giant Huawei, which will attract educated professionals to the base in Qingpu.

“Thus Huawei’s ongoing construction of a base in Xicen, in Qingpu’s Jinze, by attracting a huge number of educated personnel to the Yangtze River Delta region, would be beneficial, for they would come with their families, and this input of educated people are good to the local society,” Erh said.

He warned against a one-size-fits-all approach to rural rejuvenation.

“Rural society is governed differently from cities,” he said. “Officials from cities bring new governance practices to rural areas. That’s good, but I think that methods that work in densely populated urban areas might not always work well in rural areas.”

He cites the example of fencing around ponds, erected in city to prevent children from falling in. In villages and watertowns, no such protective rails exist.

“In rural areas, children are told from an early age that they should take care around ponds, and if they fall in, it’s their own fault,” said Erh. “Villages should look natural.”

In some villages, households use vacant plots to grow vegetables, which can be marketed if there is a surplus.

“Family plots should not be banned, nor should vacant plots be restricted to flowers,” Erh said. “Flowers are beautiful, but they are not edible.”

The sense of quietude in villages is welcome to visitors, but first of all village should be the home for villagers.

“To maintain the cultural and natural purity of villages, we first have to preserve their daily way of life,” he said. “For visitors from cities, close contact with authentic village life is healing.”

He added, “For me, to see the physical appearance of watertowns well-preserved, rather than wholesale urbanization, is totally worthy of anticipation, even if this will only take place after five or 10 years’ time.”