When it comes to the world’s two favorite beverages, Yunnan Province in southwestern China has all bases covered. It is both a tea and coffee producer.

Li Jianwu, 27, works in a mountain village under the jurisdiction of the Yunnan city of Pu’er, which has come to be dubbed the “coffee capital” of China. Ironically, the city is most famous as a producer of Pu’er, a premium dark Chinese tea.

Li operates a small coffee plantation in Manzhuang Village. He and co-workers harvested 20 tons of coffee this year after a coffee-processing factory funded by the Shanghai government went into operation in 2020. About half the harvest will go to Shanghai, some 3,000 kilometers away. 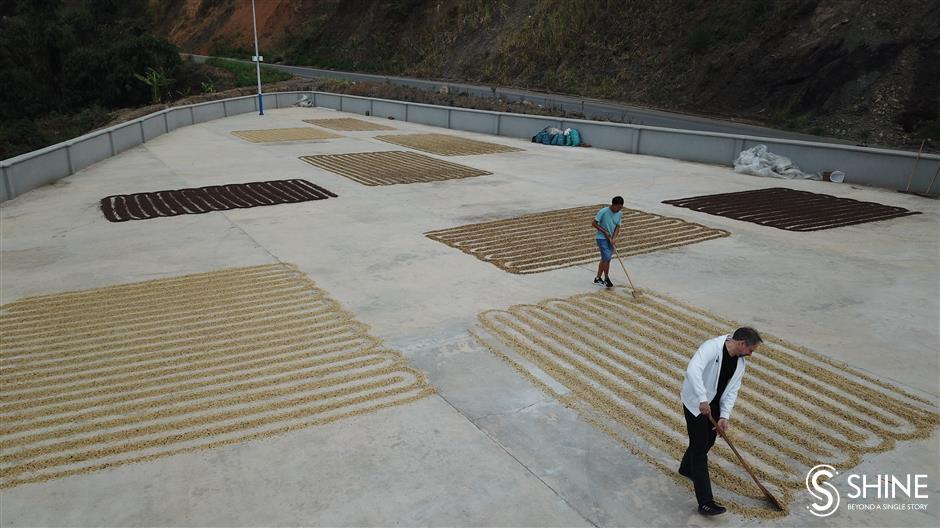 Li Jianwu (in background) and Eric Baden, founder and chief executive of Coffee Commune, turn washed coffee beans being dried on a patio in Manzhuang Village in Yunnan Province.

Shanghai is a robust market for coffee beans. The city is home to nearly 7,000 cafes and consumes hundreds of thousands of cups of coffee every day. A trend toward boutique and independent cafes, which now account for just over half of all coffee houses, is helping Yunnan coffee expand into all corners of the city.

Coffee cultivation in the Yunnan actually goes back about 120 years. In the late 19th century, a French missionary introduced several coffee plants to Yunnan to provide himself a cuppa every morning. The soil and climate of mountainous areas of the province are ideal for the plant’s cultivation.

Among the new generation to benefit from the crop, Li studied at the Yunnan Forestry Technological College, first turning his attention to coffee in 2018. 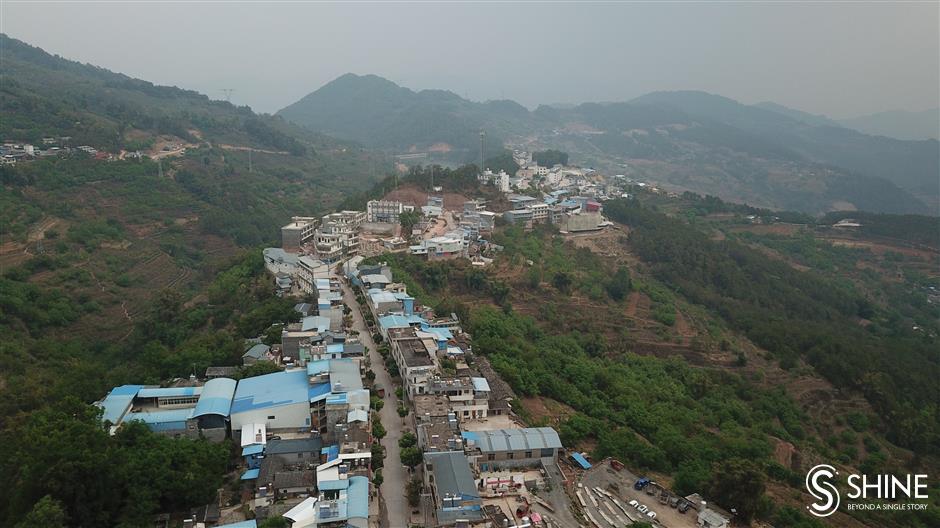 An aerial view of Manzhuang Village

His village, once a poverty-stricken area, has trouble keeping youth like him at home to do agricultural work.

“Maybe because the village is so remote, most young people here prefer going to work in urban areas, rather than staying at home with nothing to do,” Li told Shanghai Daily.

Li said he is content to stay because he is doing what he likes.

“In the first year of coffee cultivation, we encountered many difficulties,” he said. “We didn’t know much about coffee, and were often cheated by those who did. Then we invited several experienced coffee farmers to join us. That helped a lot.”

At first, the enterprising group had not developed a budget.

“Once we did, we found it was more costly than we imagined,” Li said. “I had to raise money from my acquaintances. My father gave me some money, and my girlfriend gave me the 60,000 yuan (US$9,252) she had saved up working at a bank.” 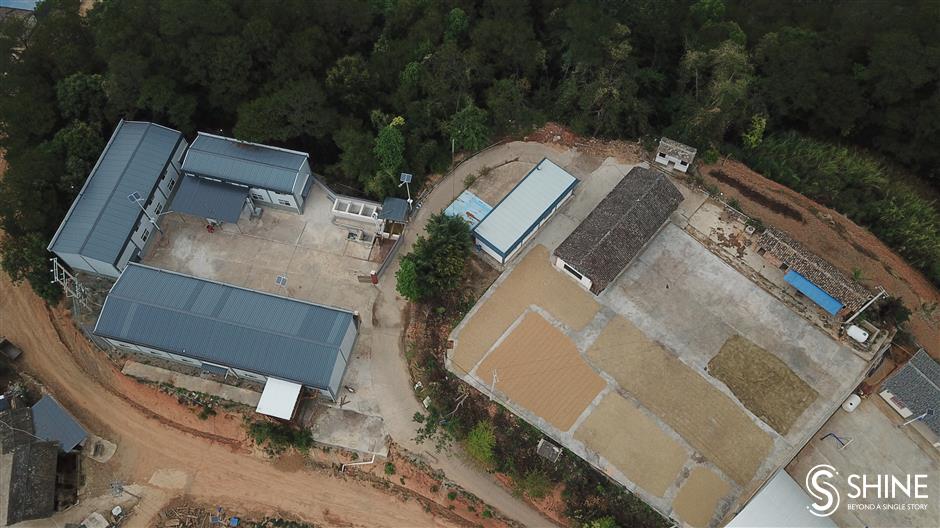 A bird’s-eye view of the village’s coffee factory, funded by the Shanghai government.

In Manzhuang Village, there are 172 households of coffee farmers, and 20 of them work on Li’s farm. In previous years, when coffee prices were low in the region, many coffee farmers destroyed their coffee plants and turned to crops like corn.

“But with the establishment of the new factory, the coffee price here has doubled, and lots of farmers are asking us for coffee plant seedlings,” said Li. “They see new hope.”

To help Yunnan coffee farmers like Li, a committee of coffee specialists at the Shanghai Technician Association not only helps with funding and equipment, but also provides experts in cultivation and marketing.

“We want the experts to help them find ways of improving their crop,” said Zhou Fang, secretary-general of the committee. “We want to make the new factory a model for processing green coffee beans in Yunnan.”

Yunnan’s coffee industry is now deploying some of the most advanced technologies in the world, including anaerobic fermentation and carbon-dioxide impregnation.

Coffee Commune is a Shanghai supporter of Yunnan coffee. It was founded by German-born Eric Baden, 53, who is now its chief executive.

Baden has been in China for more than two decades, where he worked in the chemical industry. His life became entwined with the lives of Yunnan coffee farmers by chance.

“I had become involved a bit with a shelter for handicapped homeless people in Shanghai,” Baden told Shanghai Daily. “It was an eye-opener for me to see how difficult it was for them to make a living. I began thinking what could be done.”

He explained that he stumbled upon someone who had started a small coffee-roasting business about 10 years ago. The business wasn’t blossoming much, but the man remained optimistic.

So Baden decided to learn about coffee-bean roasting. 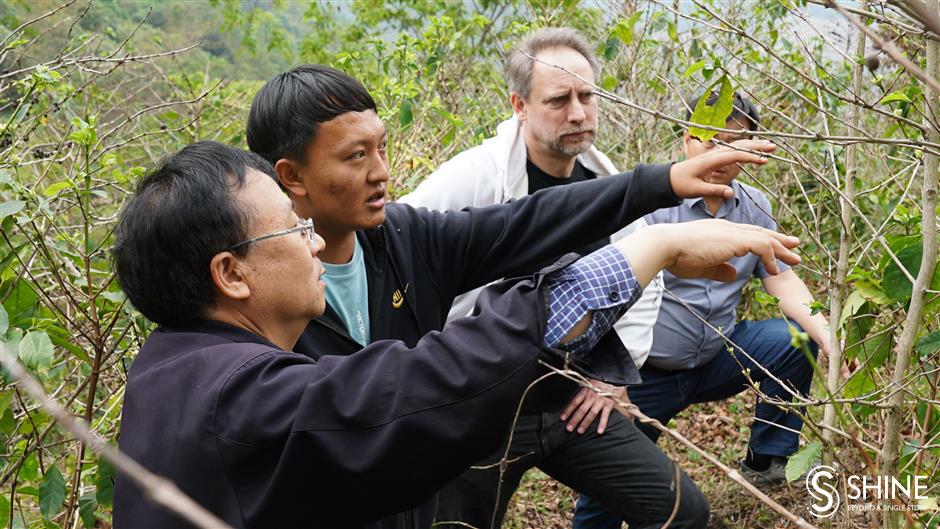 “It started as a sideline,” he said. “But the more I got into it, the more I realized what a large investment is needed for a successful business.”

Baden subsequently started his own company to help small entrepreneurs in the business. He decided to leave his work in chemicals to devote full time to the company.

“I really needed to learn everything I could about coffee, so I went to a Yunnan coffee school to learn the business from the bottom up, from growing to processing, roasting, grading and brewing,” he said. “I’m now an international coffee judge.”

In the process, Baden came into contact with struggling Yunnan coffee growers.

“It broke my heart to see the conditions that these very sincere, hard-working people were living under,” he said. “It’s a very hard life up in the mountains. And they had to go out no matter what the weather to tend their plants. They lived in very basic housing. Many villages didn’t even have adequate sanitation facilities.”

But there was reason for hope.

“Yunnan produces about 130,000 tons of arabica coffee every year,” he said. “It’s one of the 10 to 12 biggest producers of arabica coffee in the world. But most of that coffee is sold as inferior quality at very low prices in international markets.”

He said a few bigger enterprises can survive or even make a little money, but small farmers can’t even cover their costs. Some get discouraged and just give up, moving to cities to do manual labor.

“They were like the people we were caring for at the shelter, people who lost hope,” he said. “To stop that happening, Coffee Commune is seeking to help the small farmers earn a decent living.” 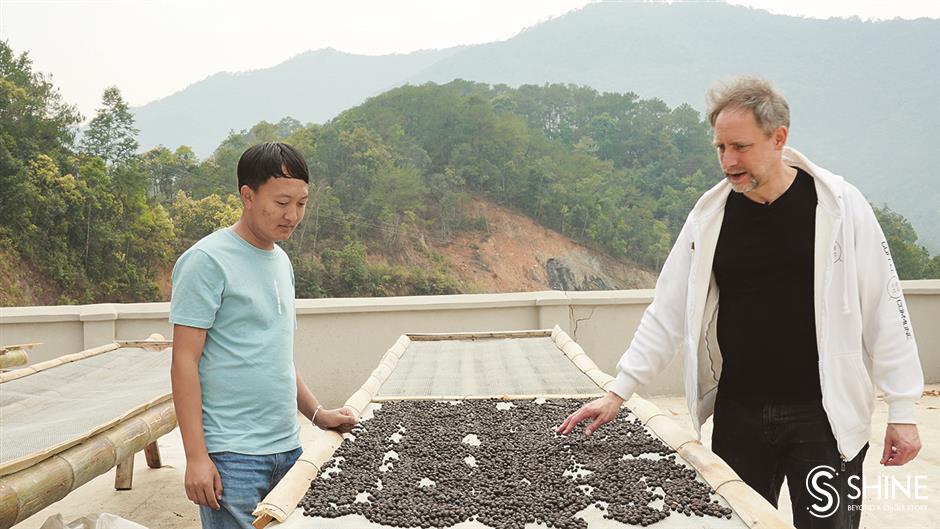 Li and Baden dry coffee berries on raised drying beds, utilizing the wind and sun in a natural process.

Baden and his team show farmers interested in growing specialty coffee how to focus on quality, teaching them how to take care of the plants, how to fertilize and water them, and when to pick the coffee cherries.

“We teach them how to get the best quality coffee out of their hard work, including processing and equipment procurement,” he said.

On April 11, Baden and Jiang Feng, leader of the coffee committee’s expert team and a coach of the China Barista Championship, awarded 83 points for Li’s coffee in a tasting.

“We’ve had coffee with flavor of fruits, black tea or even oolong tea, but it’s rare to find a coffee with a flavor so close to Pu’er tea,” Jiang said. “That may have something to do with the soil and the local planting methods. It’s a special feature that can create a high-profile brand.”

Baden said the key to the future for Yunnan coffee is improving the quality. The more the farmers realize that their coffee can achieve high ratings and that quality brings higher prices, the more confident they will be, he added.

According to Zhou, Shanghai will soon build the Hongqiao International Coffee Harbor, a major trading center for green coffee beans. That should help support the sales of Yunnan beans, he said.

Reporter’s thoughts: A place that evokes an ancient poet

Every morning at dawn during my stay in the remote village of Manzhuang in Yunnan Province, I am awakened by the cock’s crow.

Roosters and hens scuttle about the tops of walls, along rutted mountain roads and around farmhouses, but there’s one place you don’t find the fowl — on the steep, terraced mountainside of coffee plantations.

The farmers of Manzhuang, also roused by the crowing cocks, get up at daybreak to trudge up the mountain to pick coffee berries.

I join them, walking along narrow mountain paths with no safety barriers. I almost slip several times during the climb.

I am reminded of Tang Dynasty (AD 618-907) poet Li Bai, who wrote in his poem “The Arduous Road to Shu:” “So dangerous, so high! It’s more difficult to go the way to Shu than going up to the sky.

The mountainside is densely forested. The trees create a semi-darkness that can be a bit eerie for a newcomer. To the coffee farmers, however, it’s just the daily pathway to work.

“The processes now are much more complicated than in the past,” he tells me. “It’s demanding. Now I have a lower yield but high-quality beans.”

The villagers are hard-working and clever. After the Shanghai government helped the village build a coffee factory, they creatively made some of the equipment themselves, including adapting an old rice husking machine to husk coffee beans.

Due to the time difference, daytime in Manzhuang is longer than in Shanghai. When Shanghai residents are eating dinner after dark, it’s still bright in the village. The longer days are ideal for drying the coffee beans on the ground.

The mountain sunsets are gorgeous.

I eat with the villagers. The fare usually involves spicy local dishes. The specialty rice noodles, however, are tamer in taste. Fried insects like grasshoppers are also popular with the locals.

Insects abound in the area, which is a bit unsettling for a city girl. When I turn on the light in the bathroom at night, large moths flitter around. There are also spiders in my small guest bedroom.

In a dream, I envision the future of Yunnan coffee. Plantations everywhere and strategically located processing plants. The beans are bagged and delivered to points at home and abroad. Yunnan coffee has a growing reputation, and the lives of local farmers benefit from that.

Liu Daiyu, deputy director of Division of Trade and Business, Department of Commerce of Yunnan Province, tells me that Shanghai is a prime market for coffee beans. I’ll remember to have a cup of Yunnan coffee when I get home.