The bouncing ball that changed the world 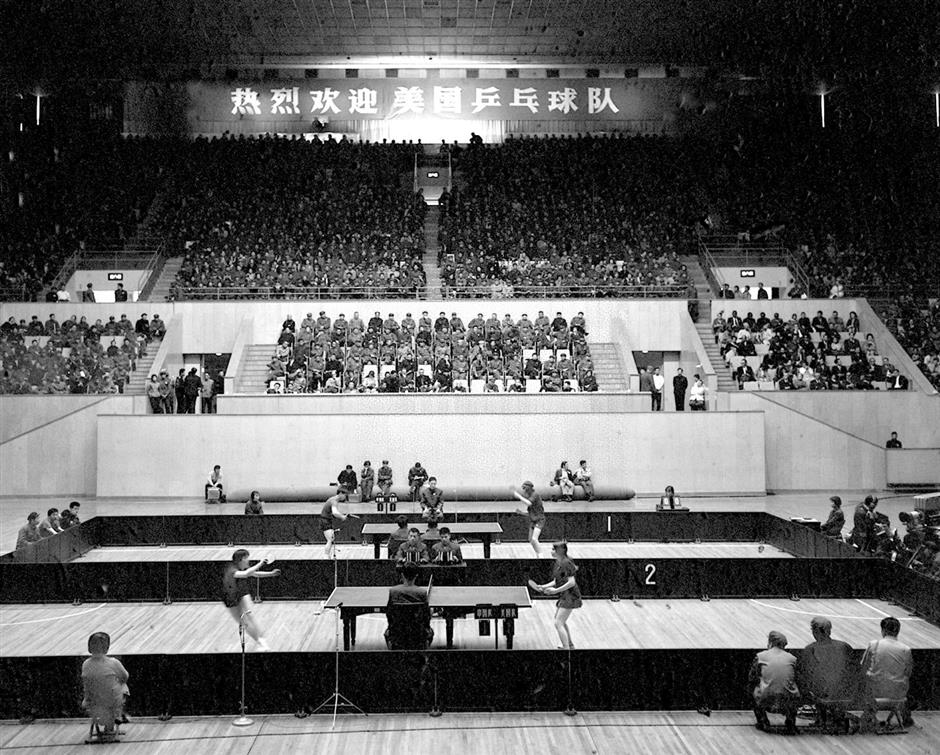 In April 1971, a group of ping pong players from the United States paid an eight-day visit to China, the first American delegation to set foot in the People’s Republic of China. It was an opening gambit in the restoration of Sino-US relations after a frozen 22 years.

Shanghai is hosting activities to commemorate the historic event that came to be known as “ping pong diplomacy.” A friendly table tennis competition was held on April 10, a historical exhibition is underway, and a special seminar will be held on Friday.

Several Chinese and American witnesses to the 1971 event shared their memories with Shanghai Daily.

The wrong bus, the right move

Xu Yinsheng, 83, then coach of the Chinese team, still clearly remembers how Glenn Cowan, a US player who was competing in the 31st World Table Tennis Championships in Nagoya in 1971, mistakenly boarded a shuttle bus carrying the Chinese national team in the Japanese city.

“We were sitting in the bus and waiting for it to set off,” he said. “Suddenly, Cowan got on, with his long hair and hippie-style clothes.”

He added, “Chinese table tennis players had met American players in many competitions, where we played against each other, shook hands and even took photos with one another as part of regular manners. So when Cowan got on, there was no hostility from us. None of us told him that he was on the wrong bus and should go off.”

Then Chinese Premier Zhou Enlai would have been proud. Before the team had departed for Nagoya, he had met the players and told them the sport was not merely to compete for prizes but also to promote exchanges among peoples around the world.

Zhou initiated the slogan “Friendship First, Competition Second” for the first time during that encounter.

On the bus, there was a language barrier. Most of the Chinese, including Xu, just sat there, but world champion Zhuang Zedong, who had an outgoing personality, stepped forward to say hello to Cowan and even presented him with a silk screen picture of the Yellow Mountain in China.

“Of course, most of their communication was in body language,” said Xu.

When the bus stopped at the Aichi stadium, it was surrounded by dozens of reporters because China was a strong contender and had been absent from the World Table Tennis Championships twice before the Nagoya event.

When they saw an American player chatting with a Chinese player, they recorded their surprise in photographs that hit the headlines the next day. 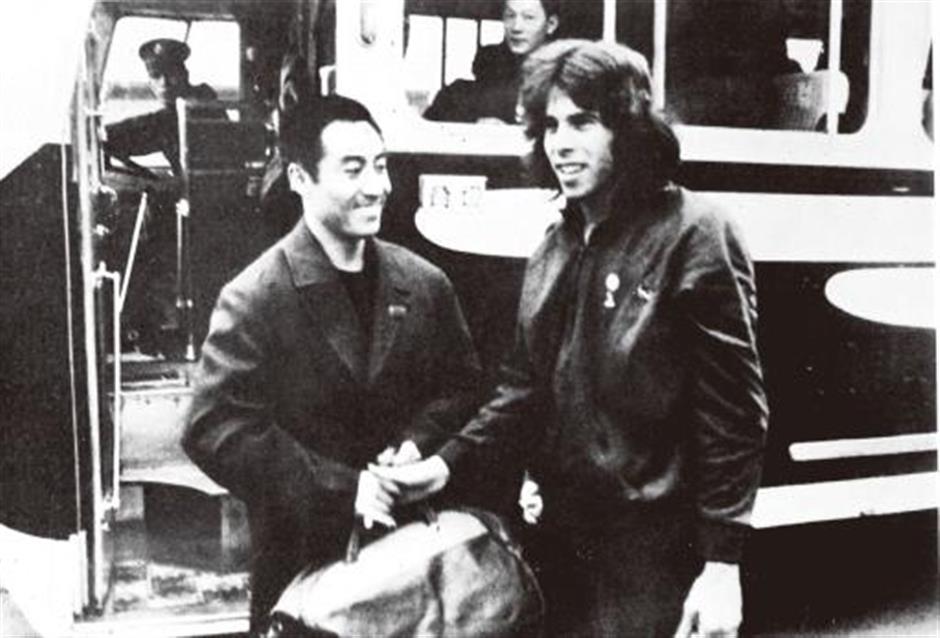 During the competition, the US delegation learned that Canadian and British teams had been invited to visit China, so the US contingent expressed its wish to visit China, too.

The Chinese delegation reported that desire back to Beijing, where the Ministry of Foreign Affairs and the National Sports Commission discussed the idea but decided the time wasn’t ripe for an American visit.

Their conclusion was submitted to Chairman Mao Zedong, who at first approved it. But on the evening of April 6, 1971, as the closing of the world championship neared, he changed his mind.

The next day, Song Zhong, then secretary general of the Chinese table tennis delegation, verbally told Rufford Harrison, director of the International Division of the US Table Tennis Association, that the American team was invited to visit China. Harrison, who was holding a cup of coffee at the time, tossed it over his shoulder in delight.

Late on the night of April 7, then US President Richard Nixon sent a telegram to the US ambassador to Japan, approving the visit of the US table tennis team to China.

On April 9, the US delegation left Japan for Beijing with 15 members. In the capital, they were taken to visit Tsinghua University, the Great Wall, the Forbidden City and the Summer Palace. They also met Premier Zhou.

The team played a friendly match with Chinese players at the Beijing Capital Gymnasium. 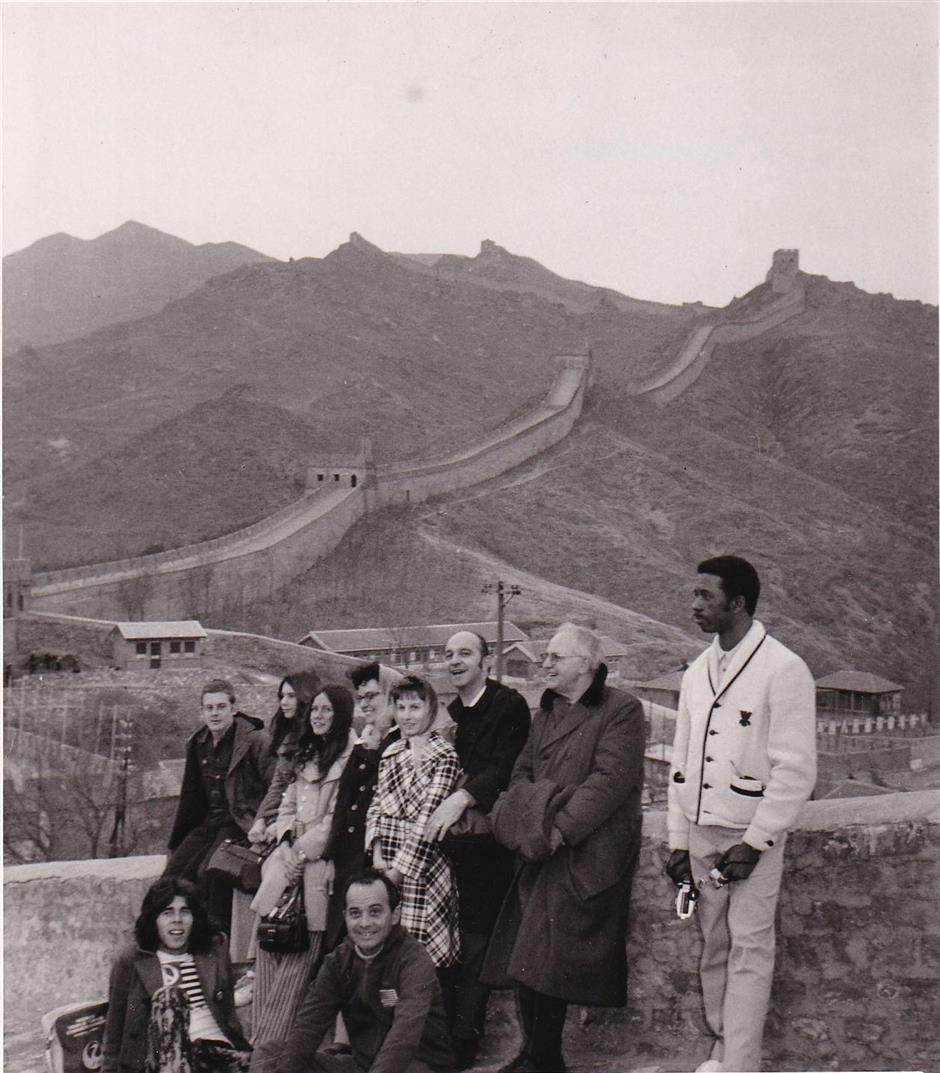 The US ping pong delegation tours the Great Wall in Beijing on 12 April 1971.

The delegation then visited Shanghai, where they trained together with local players and played another friendly match. They also visited the People’s Square and the Bund, and Jiading and Baoshan districts.

“Ping pong diplomacy not only helped promote the development of Sino-US relations, but also changed the world structure,” Xu said. “It was the first time I fully understand how sports can contribute to promoting world peace in the world.”

Despite current disagreements between China and the US, people-to-people exchanges should not stop, he said. They accumulate goodwill.

Lose a game, win a friendship

Wu Xinmin, 71, then captain of the men’s ping pong team in Shanghai, was one of those who welcomed the US delegation at Hongqiao airport and accompanied them during their stay in the city.

He played in the friendly match with them at Jiangwan Stadium in Yangpu District.

Wu has a thick album of photos taken during the visit. One shows him presenting a team pennant to Jack Howard, captain of the US team.

“The visit was unexpected, so the US team had not brought their pennant along to exchange,” said Wu. “Instead, Howard gifted me a mechanical pencil.”

According to Wu, Premier Zhou asked Chinese players to lose some of the matches for the sake of friendship, both in Beijing and Shanghai.

“My opponent Errol Resek had lost a match in Beijing and was upset, so I was asked to lose a game to him,” said Wu. “I had been trained to win games, but on that occasion, I didn’t hit the ball as hard as usual. After Resek won the match, his wife came over to thank me.”

The US ping pong delegation members Glenn Cowan (right) and Errol Resek (left) take photos with Shanghai players Yao Zhenxu (second from right) and Wu Xinmin on April 15, 1971, when they arrived in Shanghai.

While visiting some families in the Pengpuxincun neighborhood, US player Cowan suddenly said he would like to visit a family. He knocked on the door of one home and a lady opened it.

“The household looked a little bit messy,” said Wu. “The lady was cooking braised pork in brown sauce and invited Cowan to have a taste. He took a bite and said it was delicious. He later told us that he had thought Chinese families were very poor but he found their life better than he had expected.”

When the delegation was leaving, Wu gave Resek a pair of gym shoes specially made for table tennis players and not available on the market. 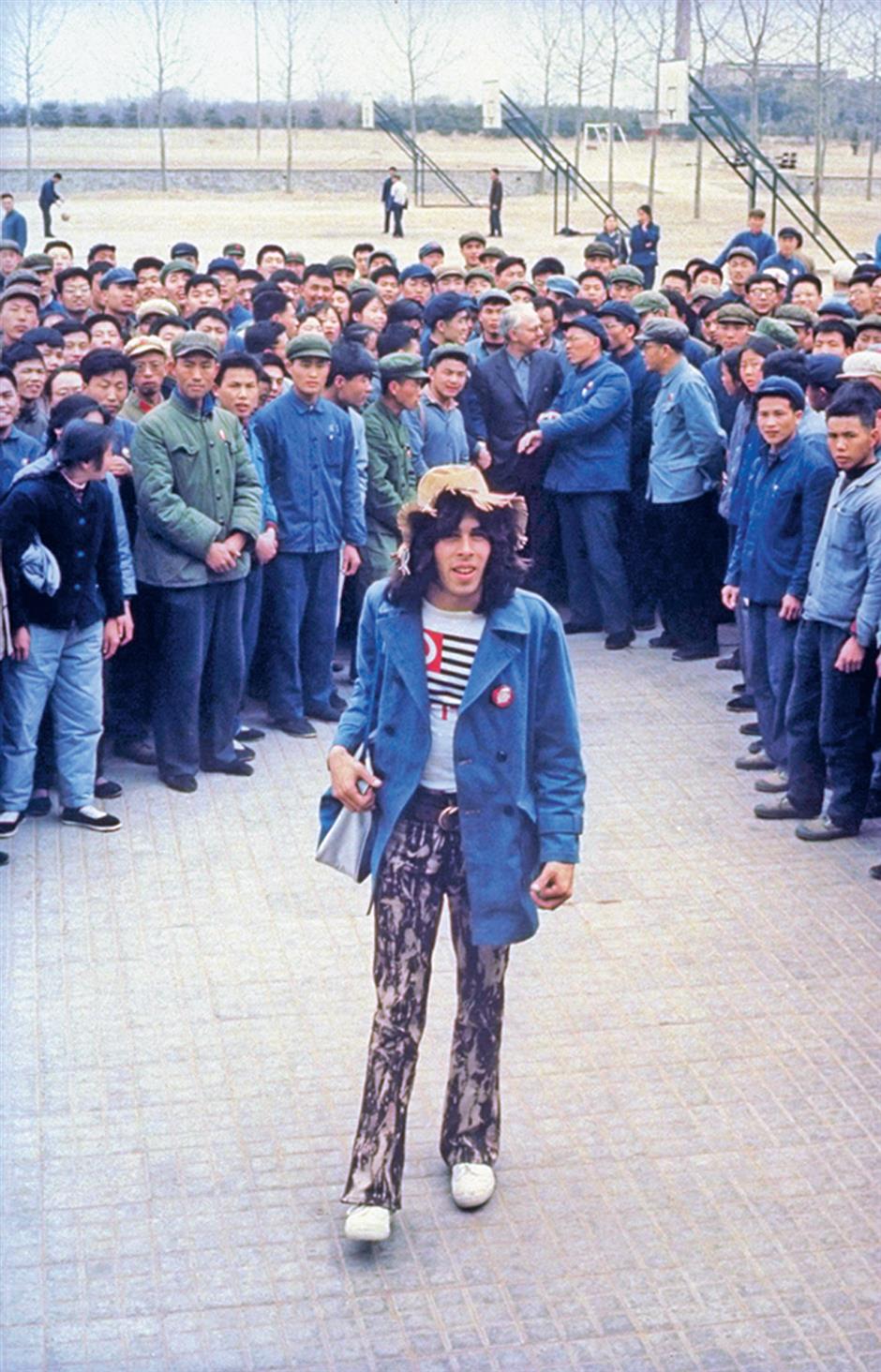 As the US delegation was leaving Shanghai. American player John Tannehill proposed a group photo.

“He took out a brocade with the image of Chairman Mao he had bought in Shanghai for the group photo,” said Wu. “He said he was grateful to Chairman Mao for inviting them to visit China.”

Wu said that the 1971 trip and later exchanges helped him better understand Premier Zhou’s hopes for shared peace and closer ties among peoples around the world.

“Communication can eliminate misunderstanding, and people have to communicate to better understand each other,” he said. 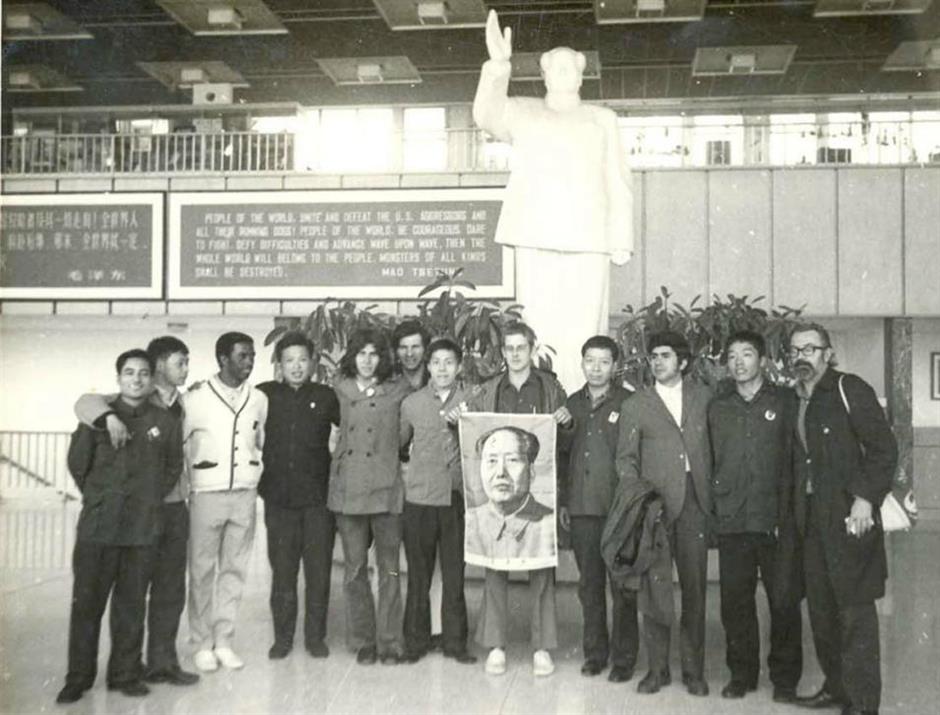 The US and Shanghai ping pong teams pose for a photo at Hongqiao airport, with an American holding up a brocade with the image of Chairman Mao before farewells were exchanged.

Connie Sweeris, 73, a member of the US delegation, came to China three times for anniversaries of the historic 1971 visit. Though she could not come this year due to the COVID-19 pandemic, she said it is an important occasion to celebrate because it reminds people of how diplomatic ties between the two countries were restored.

She said the US team was happy when informed that Cowan had boarded the wrong bus and received a warm welcome from Chinese players.

“It was really nice that Cowan got to meet the Chinese players and especially Zhuang Zedong,” she said. “We all had great respect for them because they were ranked top in the world.”

When the US team received the invitation to visit China, Sweeris recalls “feelings of apprehension and excitement.”

She explained, “Apprehension because I did not know anything about China or the Chinese way of life. I knew it was a communist country and that no American had been allowed into China since 1949. I was excited at the same time because we would be training and competing with the best players in the world.”

She recalled some highlights of their trip, such as walking on the Great Wall and meeting Premier Zhou.

“At the meeting with the premier, he asked the president of our US delegation if we had any criticism of our trip,” she said. “Our president said yes, and the whole room fell silent. I thought, ‘Oh no, what’s he going to say?’ Then he said, ‘You feed us too much!’ Everyone laughed.” 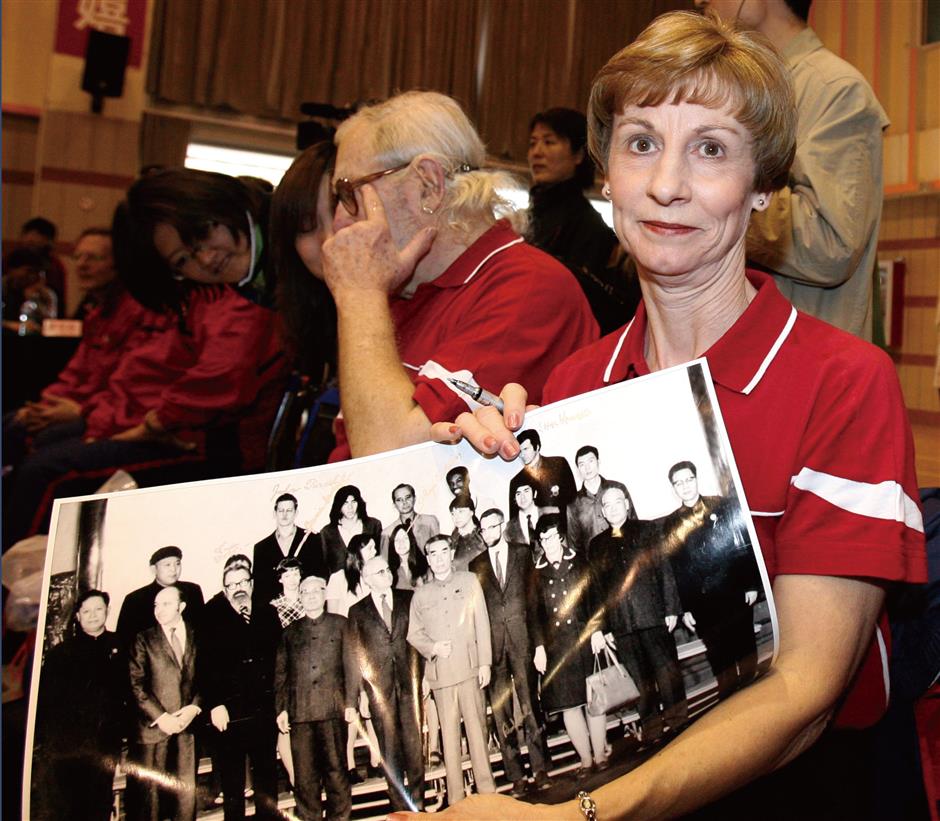 While attending 2006 activities marking the 35th anniversary of the historic event, US delegation member Connie Sweeris displayed a group photo takenwith Premier Zhou Enlai during the US team’s 1971 visit.

Sweeris said she remembers her impressions of life different back home – the clothing, the transportation and Chairman Mao’s pictures and statues everywhere.

“The Chinese wore pants and jackets with a Chairman Mao badge pinned on them,” she said. “Everyone seemed to be riding bicycles or walking. We saw very few cars. I felt the people were friendly and engaging, but poor economically. The country itself was beautiful.”

After the team’s return to the US, Sweeris said she was kept busy with speaking engagements about what China was like. All the publicity helped ping pong become a little more popular in the US.

Looking back to the historic trip, Sweeris said: “I believe that current and future generations can learn from this event, and it may help to solve issues in the future.”