Wetland birdsong indicates the health of an ecosystem 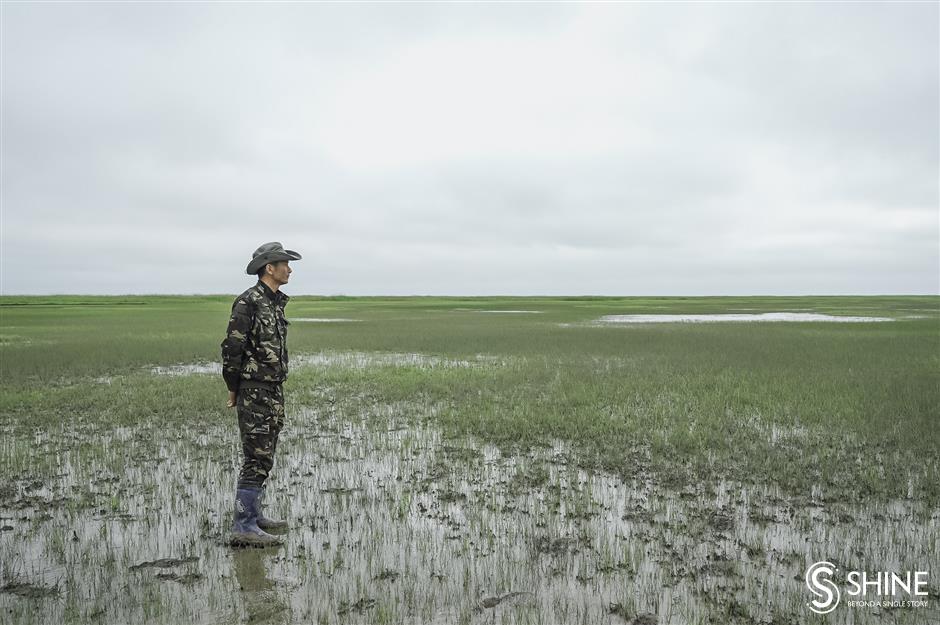 Yin Hongchao stands on the wetlands, watching for birds.

Birds and flowers seem to go together in the public mind — marvels of the natural world.

Therefore, some visitors to the 10th China Flower Expo that opens tomorrow on Chongming Island may want to tack on a side trip to the nearby Dongtan National Nature Reserve to hear a variety of birdsong found nowhere else in Shanghai.

The island district in the city’s backyard is home to about 120 bird species, including rare species like the greater white-fronted goose, striated heron, and black-faced spoonbill.

The 265-square-kilometer wetland bird area in the Dongtan reserve is a stopover point for about 3 million birds on the Asia-Pacific migratory route every year.

A group of dedicated people on the island study the flight paths and lifestyles of the birds as part of an overall program to protect wildlife and the ecosystem they thrive in.

One of them is Yin Hongchao, 41, a former factory worker and now a “bird guardian.” His mentor is Jin Weiguo, a longtime local bird specialist. 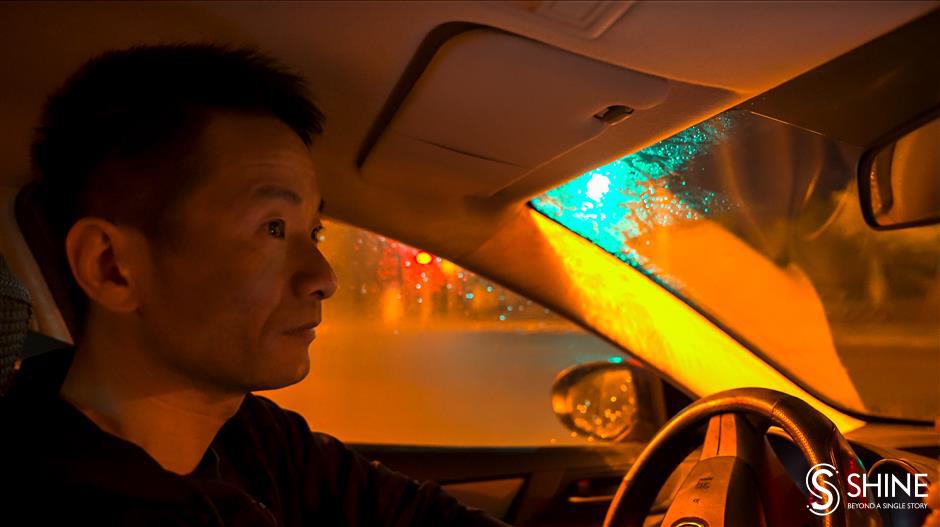 Yin drives to work at the reserve before the crack of dawn.

Yin gets up at about 3:30am, and half an hour later is driving to the reserve not far from his home.

His morning work involves helping catch waders to be taken to scientists on the island for examination and tagging before release.

In the wetland, Yin, Jin and two other colleagues split into two groups. At first, they walk on a plank path but when that ends, they step into the wetlands. Their galoshes sink into the mud. Progress is slow.

When they reach what they think is an ideal spot, they spread out a net. As birds fly by, Jin recognizes their calls and mimics them by mouth or by bird whistle to attract their attention. If one of the birds lands on the net, it is captured.

The caught birds are taken to a wooden shelter where scientific staff measure the wings and beaks, take saliva and feces samples, check for diseases like bird flu, and attach ID rings to their feet.

Yin has been trained how to gently hold the birds so that they don’t panic during the process. Once it’s completed, the birds are returned to the wild. 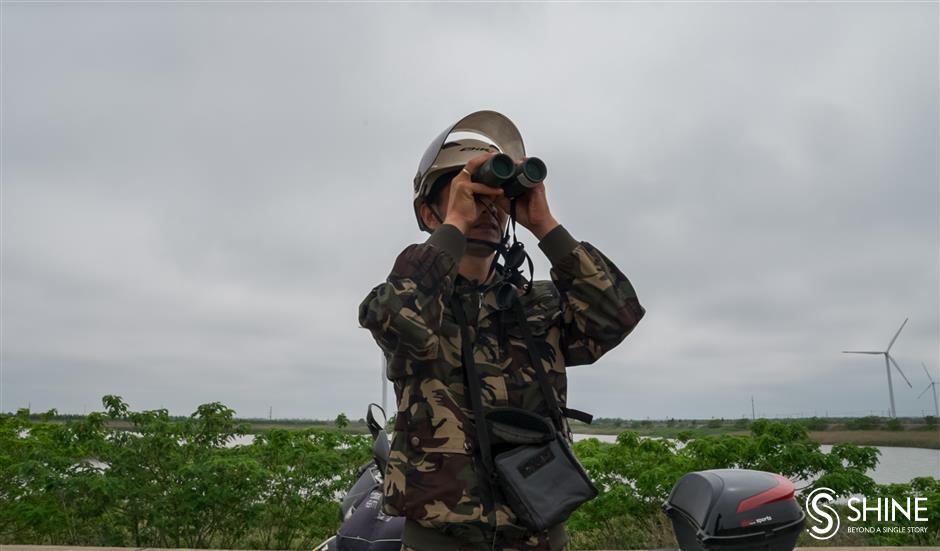 Yin, on motorcycle patrol, looks for birds and illegal hunters.

In the afternoon, Yin goes to another protection station, a base for his motorcycle patrols.

His job is to check for anything abnormal in the reserve and keep on the lookout for illegal hunting and fishing.

Yin is a native of Chongming Island and has always loved wildlife. He had no experience in protection tactics, but he was a quick learner. The hardest part was recognizing all the various breeds of birds.

“Sometimes two different kinds of birds look very similar,” he told Shanghai Daily. “When we ride to a site and see a bird, we need to record what it is. Even at the same site, different birds appear in different seasons.”

He often wandered in the reserve in his off-work hours to familiarize himself with bird calls. He reckons he can now recognize about 80, but learning how to mimic them was harder.

“Bird calls require special skills,” Yin said. “My mentor Jin showed me how to use the uvula to make bird sounds.”

He says he has now mastered some basic birdsong.

Yin said the bird reserve has really improved after efforts to beat back invasive smooth cordgrass from a 24-square-kilometer zone in the reserve. The reedy grass was first introduced years ago to protect the wetlands from sea erosion but quickly took over, stifling other plant life. Bird numbers are now increasing. 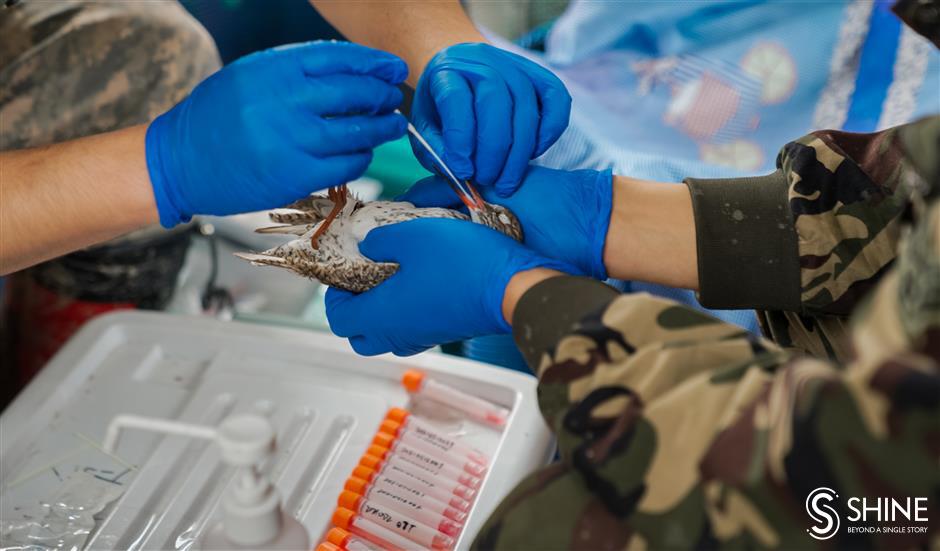 Scientific staff examine, log and tag caught birds before releasing them back to the wild.

Jin, 60, was once a wild bird hunter, like his father and grandfather before him. He used to tag along on his father’s hunting trips and learned bird calls from him.

At the age of 10, he was able to use a bamboo whistle to imitate the birdsong of more than 20 species of birds. He became a famous bird hunter in the Dongtan area.

But in the 1990s, the number of migrant birds declined in Chongming as the ecological balance of the area deteriorated, and Jin recognized how hunting was making the situation worse. So he gave up hunting and became a bird protector.

In 1998, the Shanghai Chongming Dongtan National Natural Reserve was created and became a center for bird research. To study the birds, the reserve needed someone to catch the birds first. Jin volunteered to do that. He later became an official staff member.

“Dongtan is one of the stopover sites on the migratory routes between Australia and their breeding ground in Arctic,” Jin explained. “The birds stop here to rest and find food to recharge their energy. About 80 percent of migratory birds stop in and stay for maybe two weeks. 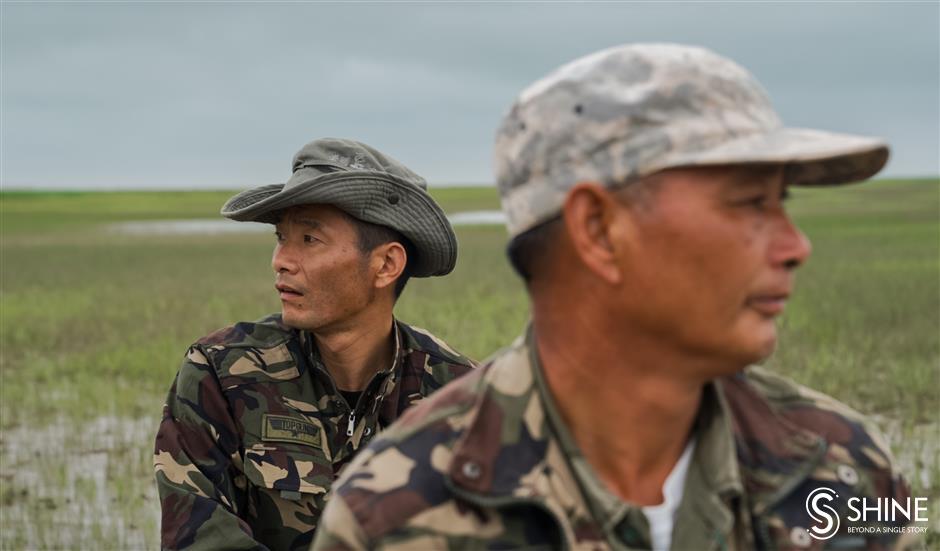 Yin (left) and Jin Weiguo spend much of their time carefully surveying the wetlands for birds.

In November 2008, Jin was invited to attend a bird seminar in Australia. As a man who speaks excellent Chongming dialect but poor Mandarin, let alone English, he didn’t have a lot to say at the conference. But when he whistled birdsongs for those attending, he was applauded.

Wu Wei is a scientist who works with the “bird guardians.” After getting his PhD in zoo ecology, he joined the reserve in 2008.

Wu said it has been very gratifying to see birds that once bred in small number are now turning into large flocks.

“Previously, for example, we observed only several Tundra Swans every year in the reserve,” he said. “But now, with much better protection, the number of Tundra Swans keeps rising. Last winter, we recorded a record 600-plus Tundra Swans here.”

“The Hooded Cranes overwinter in Dongtan every year,” Wu explained. “They spend some 150 days here and then leave in spring. So, every October, we look forward to their return.”

The nature reserve draws an ever-increasing number of birdwatchers. Wu warns them to keep a proper distance from the birds and never disturb them. 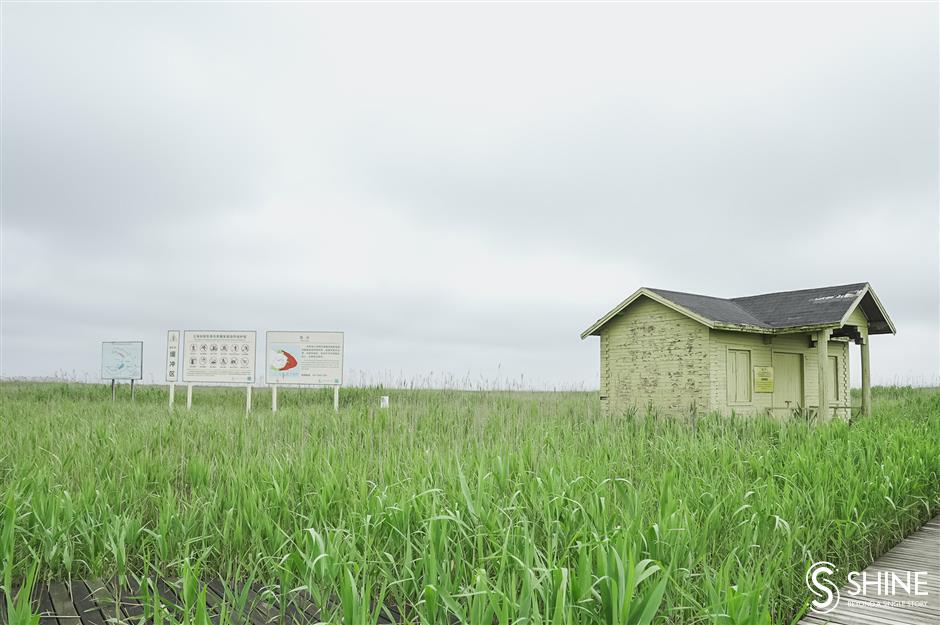 Another contributor to Chongming’s ecology and bird protection is the Worldwide Fund for Nature, which established an office in Dongtan years ago.

“The population of water birds is a key indicator of the biodiversity in a wetland ecosystem,” said Zhang Yimo, the fund’s project coordinator of wetland management in the central and lower reaches of the Yangtze River.

“According to the waterbird counts by both the WWF and the nature reserve,” he said, “we see an obvious rise in both bird numbers and species. That is encouraging.”

He told Shanghai Daily that the fund’s earliest work in Chongming dates back to 2007, when it started a volunteer project and launched a “protected area network” along the Yangtze. In 2011, based on the data collected by network, an international training center for wetland professionals in China was established on Chongming.

“We jointly designed habitats in a 3-square-kilometer wetland in Dongtan,” Zhang said. “We are proud to report that it has been a success in increasing both bird populations and species. As many as 14 endangered species were recorded in this small habitat, including the critically endangered spoon-billed sandpiper.”

He said plans are afoot to develop a full toolkit on wetland management in China, comprising textbooks, lectures and other resource materials.