Remembering Rewi Alley, the New Zealander who made a lasting, massive impact in China

On April 21, 1927, a young New Zealander named Rewi Alley first stepped foot on China's mainland, right here in Shanghai at Dock 16. He didn't know it then, but he would go on to make a huge impact in China, and would remain here until his death 60 years later.

It's hard to sum up briefly what Alley did in China in those six decades, because he did so much.

Some of his achievements include fighting to give child factory workers in Shanghai safer conditions and better treatment, helping set up the hugely influential Gung Ho cooperative movement to support Chinese industry under Japanese occupation, setting up and running schools for disadvantaged youth, fighting for world peace on behalf of China on the international stage, and fostering relationships and understanding between China and the rest of the world.

Alley's cousin, award-winning novelist Elspeth Sandys, explains who he was in simple terms. He was "a great humanitarian, I would say – a man with almost no personal needs or feelings that he was owed anything." 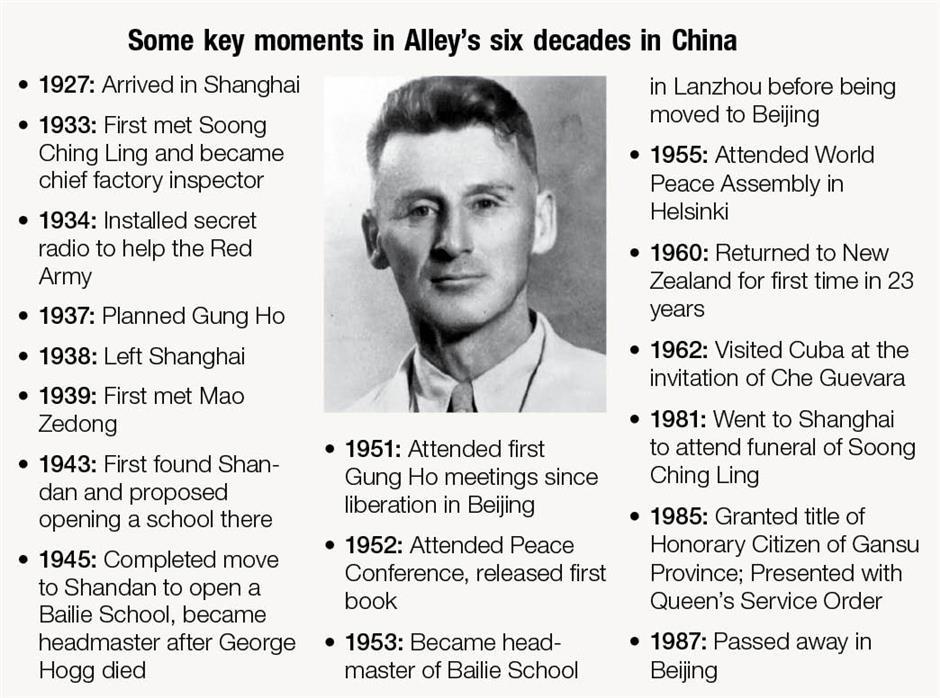 After he arrived in Shanghai, Alley secured a job as a sub-officer at what is now Hongkou Fire Station. Soon he was promoted to the role of chief factory inspector, charged with ensuring the city's factories were up to standard. It was in that role he began to see suffering daily.

"He witnessed and saw a lot of atrocious working conditions," Dave Bromwich, president of the New Zealand-China Friendship Society, explains. "Children locked in factories working 12 hours a day, appalling conditions, no escape if there was a fire."

Alley was able to secure some changes, including better quality food for child workers, improved safety conditions and access to medicine.

When Alley first arrived in Shanghai, he wasn't very interested in politics. But Shanghai's White Terror, a period when suspected Communists were captured and executed by the Kuomintang, helped him decide where his allegiance lay. 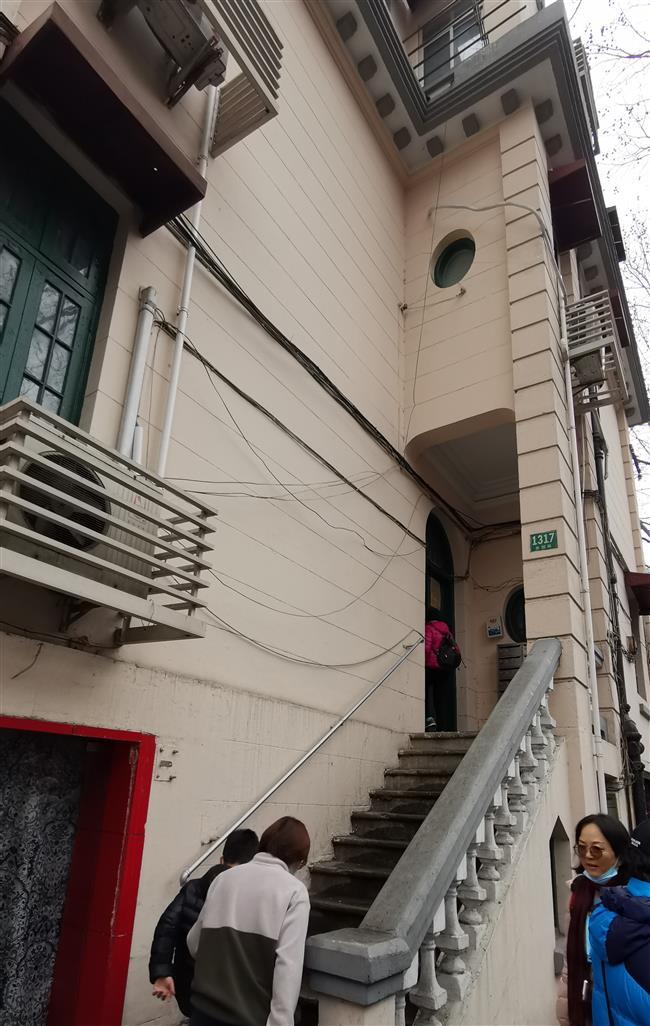 The former residence of Rewi Alley on Yuyuan Road in Shanghai. Alley had lived there from 1932 to 1937. His residence on Yuyuan Road was a refuge of underground Party workers. The CPC Shanghai had set up secret radio in the attic.

During his later years in Shanghai in the late 1930s, Alley met some important internationalists who pulled him deeper into the politics of the time, ultimately leading to him protecting numerous underground revolutionaries in his home, as well as setting up a radio on his roof to communicate with the Red Army outside the city.

"He didn't really become political until he had to," Sandys explains. "Until he really had to make a choice between the Nationalists and the Communists."

By 1938, Japan occupied most of Shanghai, except for the International Settlement. Alley decided it was time to leave to set up his Gung Ho industrial cooperatives around the country, away from Japanese controlled areas. That brought his decade in Shanghai to an end, but opened what was arguably the fulfilling 10 years of his life.

Alley was a key figure in the setting up of the so-called Bailie Schools, named after Joseph Bailie, an educator who he met back in Shanghai and came up with the idea of creating schools to help lift China from poverty. With Japan occupying much of the country, the schools had been forced inland, but the Kuomintang kept catching up and trying to interfere.

That's why Alley set off on a huge trek through China's northwestern Gansu Province in search of the perfect place to move the students of the school, at that time operating in Shaanxi Province. He came across the town of Shandan, which he described as "the poorest place I had come across in my China travels" but "with a special air." Houses could be rented easily for the school, and there was ample coal and grain. But best of all, Shandan was so secluded he was sure the Kuomintang wouldn't find it. 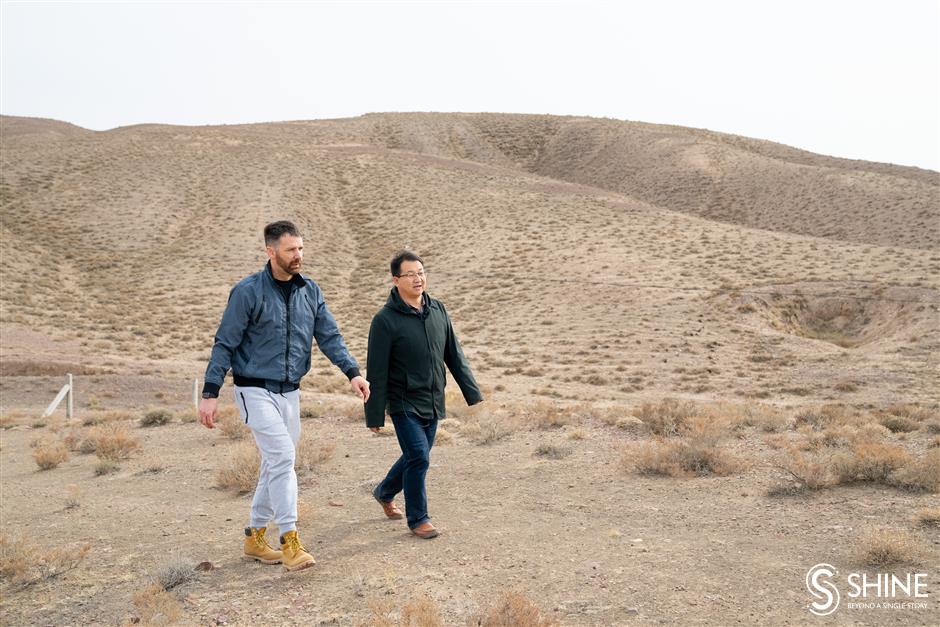 Zhao Qianxi (right), a researcher at the Rewi Alley Memorial Hall, takes Andy Boreham to an old site of the Bailie School where they dig up artifacts made by students there.

By early 1945 the move was complete and Alley would end up spending nine years here; the happiest of his life.

More than 70 years later and I, too, found myself in the remote village of Shandan. There are statues of Alley everywhere, the main street is named after him, and a huge museum celebrating his life towers over one part of town. As a fellow New Zealander, it's almost difficult to believe.

"He often talked of Shandan as his home and as his time there as the happiest of his life," Sandys told me, all the way from New Zealand. "He took pride and pleasure in seeing the students develop and overseeing the growth of the school, which eventually became self-sufficient." 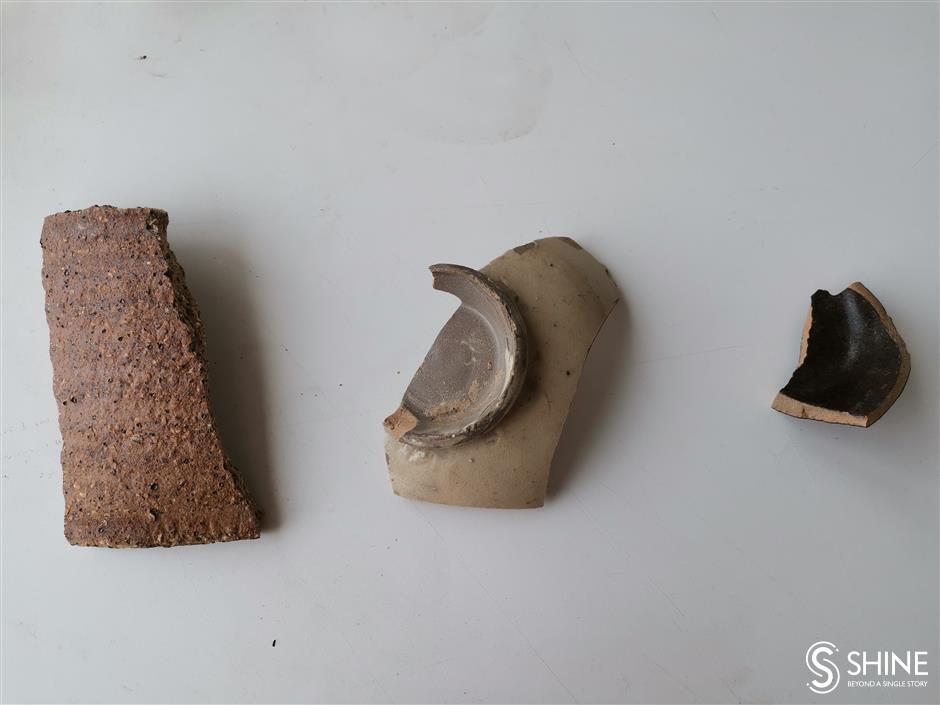 The newly built Shandan Bailie School of Gansu Province, with over 2,000 students, is just hundreds of meters from Alley's museum. I visited to chat with Liu Guozhong, a teacher at the school and an Alley scholar.

"His nine years in Shandan was his happiest and most fulfilling time in his life," Liu said. He's left a lasting legacy, he told me, which has no sign of disappearing. That includes "create and analyze," the motto of the Bailie schools which focuses on students using their hands and their brains to become more rounded members of society.

Soon after liberation, in 1953, the new government requested Alley move to Beijing to help with world peace and international relations. He remained there until his death in 1987, but Shandan never left his thoughts.

"He was homesick for the place for the rest of his life," Sandys said. "Being a teacher came naturally to him. His father was a teacher, it was in the blood."

Shanghai also played a pivotal role in his life, Sandys said. "Shanghai was where he became the Rewi Alley we know now, Shanghai made him into that person." 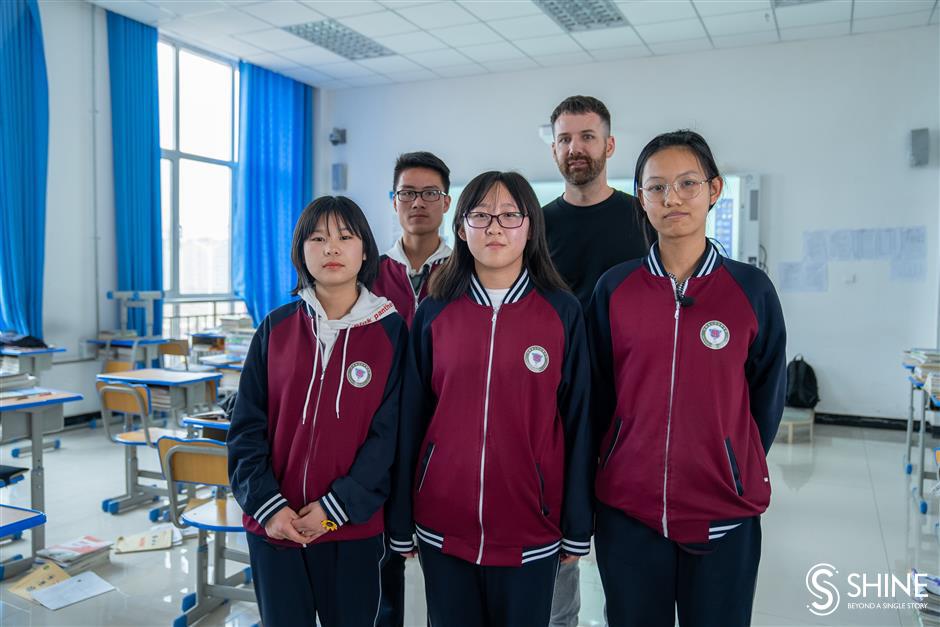 Backgrounder: When they needed bricks to build a school they made their own kiln

At the end of 1944, the Bailie Technical School moved west from Fengxian County's Shuangshipu in Baoji, a city in Shaanxi Province, to Zhangye's Shandan County in Gansu Province. Students were organized to construct the school buildings.

In order to solve the problem of a lack of bricks, Rewi Alley and other school managers decided to build their own kiln, inviting rural experts to help. When the first brick was fired, both teachers and students were inspired and their passion ignited. The adobe they made was used for the walls, while the green bricks produced in the kiln paved the floor. Some workshops were built on stone foundations and paved with green bricks that were two feet thick.

Several relatively senior students, one of whom was Fan Wenhai, were in charge of the kiln. Fan was about 20 years old at the time.

The quality of bricks they produced was no less than those fired in the local bowl kiln. The green bricks we found at the Bailie Technical School farm were fired in the school kiln around 1947. More than 70 years later, their texture is still very hard, not rotted into dust. History has assessed its quality.

Shandan pottery has a long history. When teachers and students at the school were digging canals, a large number of painted pottery and sand pottery from the "Siba culture" period were unearthed. They date back around 3,900 to 4,000 years. It is said that the firing of porcelain began in the Hongwu period of the Ming Dynasty (1368-1644), and in Wanyaogou, southwest of Shandan, hence the name. 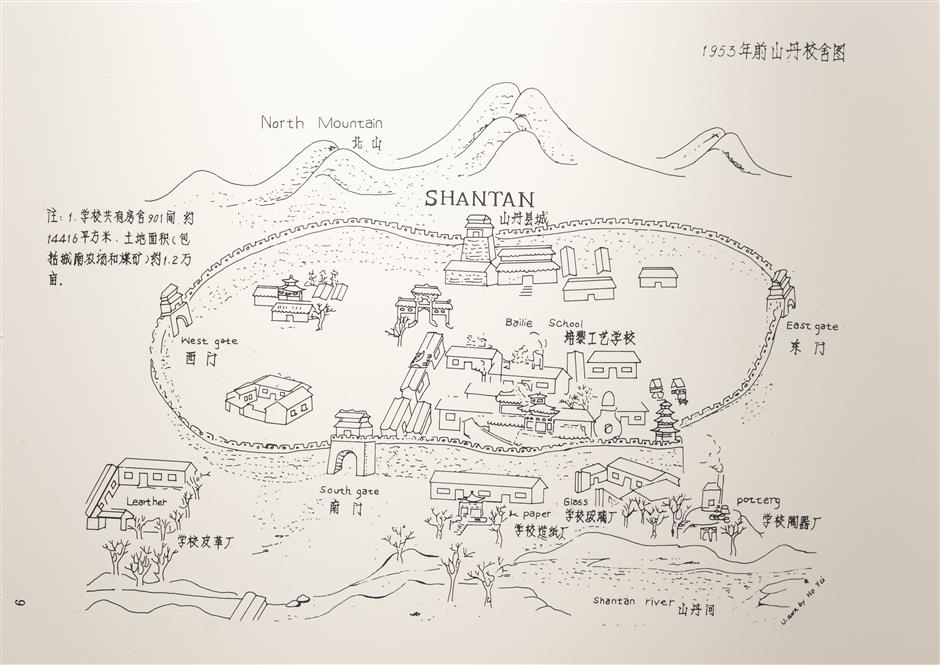 A hand drawn map of the Shandan Bailie School before 1953

With the help of the abundant clay resources near Wanyaogou, a ceramic group was organized, and a ceramic product room built, which solved the problem of school bowls, kitchen utensils and large jars for pickled winter vegetables.

In order to improve the quality of ceramic products, Alley invited technicians from Jiangxi Province to lead the students in experiments and finally made coarse white porcelain products which were much more advanced than the black ones. While Alley was still not satisfied, he encouraged technicians to further improve the ceramic craft.

In 1948 alone, the school ceramics group produced 3,500 teapots, 6,000 tea bowls and 4,000 rice bowls. It is reported that at that time, there were more than 600 teachers and students at the school, divided into 26 production practice groups. The ceramics group was just one of them.

At the end of 1953, the school moved to Lanzhou, the provincial capital. At that time, the production practice groups, farms, pastures and coal mines were transferred to the local government or relevant ministries and commissions. The ceramics group was handed over to Shandan County, which laid the foundation for Shandan to establish a ceramics factory.

(The author of the "Backgrounder" is Zhao Qianxi, a researcher at the Shandan Alley Memorial Hall. This part is translated by Wang Haoling)