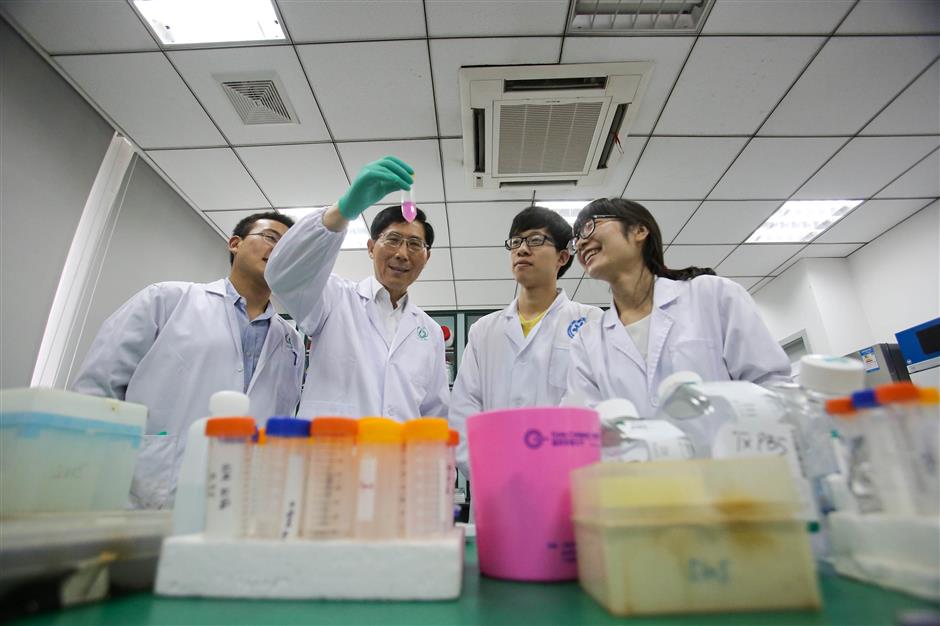 Chen (second from left) does tests with his students at lab.

Medicinal chemist Chen Kaixian describes his life as "a series of fortuitous circumstances."

He was supposed to study nuclear physics but found real success with his research into medicine, and he had expected to deal with modern medicine but embraced traditional Chinese medicine (TCM) at an old age.

"My entire life has been full of unexpected twists and turns, but they've made me who I am today," said the 76-year-old Chen. "There's bound to be challenges in one's life. What really matters is how we face them. It requires determination and willpower."

Despite late entry into the study of drugs, Chen's rise has been meteoric.

He pioneered China's drug discovery research by computer-aided drug design, which jumpstarted the nation's pharmaceutical industry – from a copycat to an innovator rivalling the West. He was also a prime mover behind Zhangjiang's pharmaceutical development. 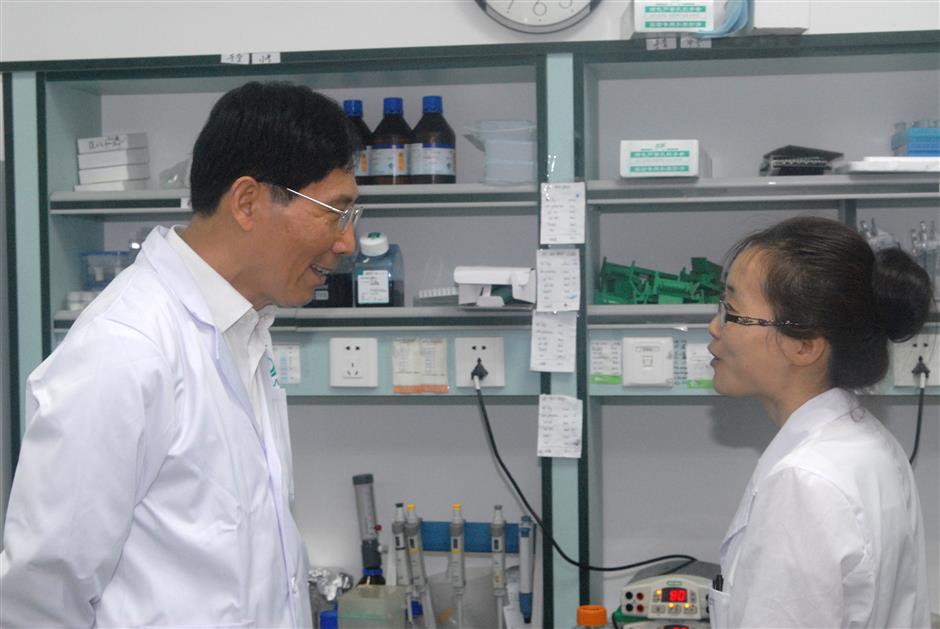 Chen talks with a researcher.

It may sound unbelievable, but with the name Kaixian, Chen was somehow destined for great things.

Kaixian sounds similar to kaixuan, literally "triumph" in Chinese. There is some connotation about patriotism behind the name. He was born 13 days after Japan announced its surrender in World War II, and his father named him Kaixian as a celebration.

"I made up my mind as a child to devote myself to the nation's scientific and technological development," he said.

At school he was fascinated by physics, and at the age of 17 he was accepted to Fudan University's physics department. But a brief postscript laid beneath the letter of admission came as a complete surprise. He was told to major in radiochemistry.

"I was so excited when I found out I was admitted to the new No. 2 Department of Physics, as I'm always enthusiastic about new things," he said. "But I couldn't figure out why physics majors would end up studying chemistry. On freshman registration day, I learned it was about frontier atomic energy research."

However, for some reasons, he failed to plunge himself into the nation's nuclear development.

Upon graduation in 1968, during the "cultural revolution" (1966-1976), he was sent to work at a farm in Anhui Province. Two years later, he was transferred to a pharmaceutical factory in Hunan Province. There, he became the keeper of a water pump.

It was an arbitrary decision. Executives from the factory thought a graduate in physics like Chen would be an expert with machines.

"I worked along Zishu River, about 2 kilometers from the factory," he said. "So I lived in a shed on the riverside."

It seemed that everything had gone amiss, but he did not despair.

"I secretly brought a book about English for chemistry from Shanghai," he said. "I learned Russian at my university, but I thought English would play a bigger role in the country's integration into the global innovation network."

After so many disappointments, he deserved some luck.

"Hardships are a person's precious asset," he said.

In 1974, he was assigned to be a technician at a local institute for the pharmaceutical industry. Finally, at the age of 29, he returned to where he belonged – studying molecules – though it was for making drugs rather than nuclear energy. It was then he decided what his life's work would be. 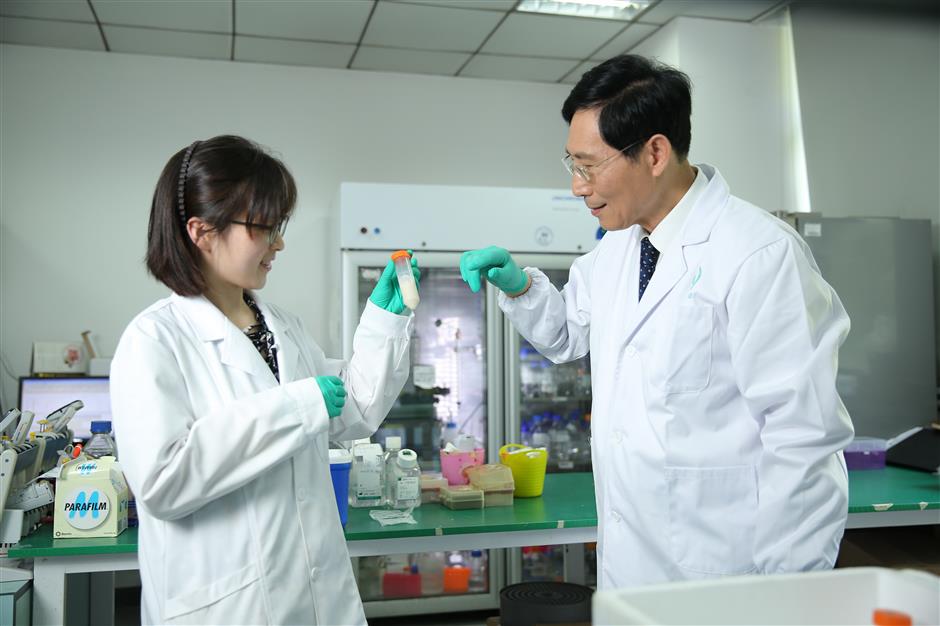 Chen works with a researcher in lab.

In 1978, he entered the Shanghai Institute of Materia Medica (SIMM) under the Chinese Academy of Sciences, and became a student of renowned pharmaceutical chemist Ji Ruyun, who, like a beacon, inspired him in his career.

For a long time, people relied on random experimental screenings to develop drugs due to a lack of theories, which were wasteful, inefficient and risky. In the late 1970s, computers emerged as a promising tool to break the bottleneck.

Ji was among the first in China to perceive the trend. He sent Chen to Jilin University where he learned from Tang Aoqing, father of quantum chemistry in China.

It was not all smooth sailing, and once again challenge emerged.

"I still remember during the first lesson, our teacher didn't say a word but wrote a math problem in English on the blackboard," he said. "I couldn't even understand it. I had never felt so embarrassed in my life, so I rushed to buy a math book to teach myself."

In 1985, Chen received a doctorate from SIMM, and was sent to further his studies in France. The overseas experience stirred up his deeply rooted patriotism.

"There was such a huge gap between China and the West," he said. "I had a strong feeling from the bottom of my heart that I had to do something to make my nation grow stronger and keep pace with the rest of the world. I had a hunger for it."

As such, when he was asked to stay due to his outstanding performance, he rejected the offer right away.

"It wasn't a hard decision. I just naturally thought I should come back," he said. "Over thousands of years, Chinese scholars have a tradition to strive for and repay our nation. We love our nation, regardless of whether it's less developed."

In 1988, he returned to SIMM with a computer that he saved to buy in France, providing access for local researchers to the world's advanced drug discovery approaches. In 1996, he was promoted to the head of the institute.

China's pharmaceutical industry encountered its turning point in the 1990s, especially after China and the United States reached an agreement on protecting intellectual property rights.

"We were in an embarrassing situation for over 40 years after the establishment of New China in 1949. At one point, nearly 97 percent of chemical drugs on the market were generic drugs," he said. "As China opened up more to the world, it couldn't copy patented drugs any longer."

Chen believed only by developing new drugs could the nation take on a new look, which was not just rhetoric.

He initiated China's first state-level new drug discovery program, led research on gene-based drugs and proposed a development plan for China's pharmaceutical industry to grow from "copycat" to "innovator." The proposal, with the support of more than 100 academics, was accepted, and it has significantly changed the nation's pharmaceutical horizon.

"Dozens of new drugs emerge around the world every year, and at least 10 of them are designed and made in China," he said. "According to McKinsey & Company, the nation has quickly moved up the pharmaceutical innovation ladder, from the third echelon (with India, Israel and South Korea) to the second (with Japan and Western Europe). And China ranks at the front." 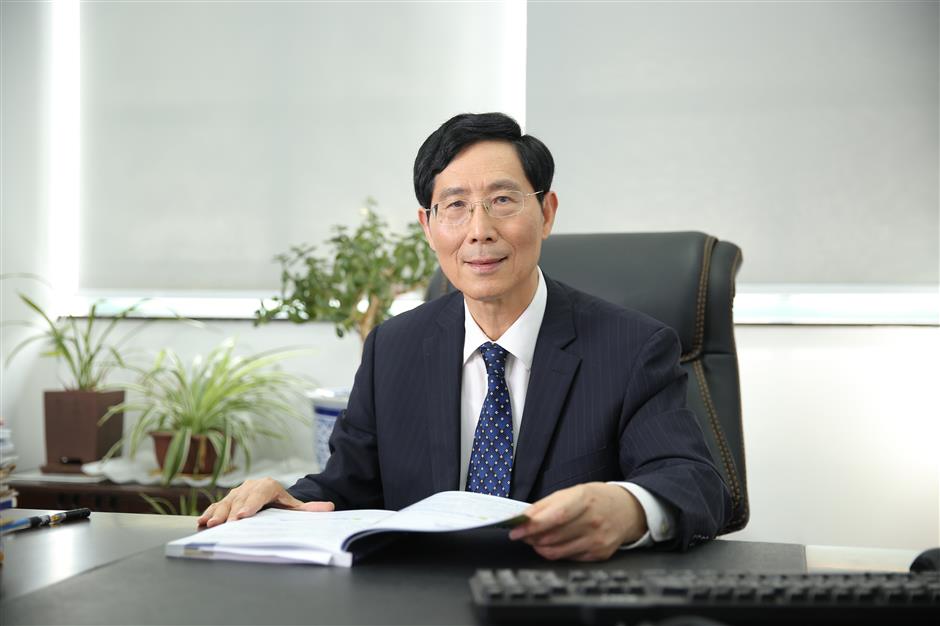 In the mid-1990s, Pudong's Zhangjiang was put in the limelight, as it was chosen to be part of the national strategy to transform it from vast farmland into a pharmaceutical valley.

A man of great foresight, Chen saw huge potential and proposed moving SIMM from downtown to Zhangjiang, which was beset by difficulties.

At that time, some still "preferred a bed in Puxi to a house in Pudong," especially since the institute was located in the Xujiahui area, very close to other research institutes under the Chinese Academy of Sciences. Researchers found it convenient for exchanging ideas, and they loved the rich academic ambience.

"There were examples of research institutes that bellied up after moving to a strange place," Chen said. "It stressed me out, but we had to move. Researchers were squeezed into old buildings and used obsolete tools to conduct experiments. It strangled scientific research."

"Our lab wasn't upgraded over the decades, and its conditions were too squalid," he said. "Once, a film crew was looking for a chemistry lab in the style of the 1930s, and they selected us."

In 1997, SIMM's National Center for Drug Screening was among the first to land in Zhangjiang. In 2003, SIMM's new site in Zhangjiang was put into use, becoming the first state-level biological medicine research institute to completely relocate there.

"Now, our labs may have better conditions than those in the US and Europe," Jiang said.

"When Zhangjiang's pharmaceutical business faced a bottleneck around 2008, Chen stood out to hear and collected hundreds of opinions from companies and reported to the city government," said Ding Shaoqiong, general secretary of the Zhangjiang Development Affairs Consultation and Promotion Association. "It was Chen who helped Zhangjiang begin the second round of development."

In 2005, Chen served as president of the Shanghai University of Traditional Chinese Medicine in Zhangjiang. He worked to integrate TCM into mainstream global health care, and went so far as to send a TCM robot doctor on a simulated Mars trip.

The robot doctor, developed by the university, scanned facial complexions, conducted tongue diagnoses and offered health-care tips to astronauts taking part in the 520-day simulation flight of the Mars-500 experiment, jointly launched by China, Russia and the European Union.

"Chen caught the trend in the digital era. He underlined combining artificial intelligence, big data and other technologies with TCM," said Zhao Yongfang, director of the university's science and technology division.

"TCM will surely dazzle the world. Future medicine is definitely something that will combine traditional Chinese and Western medicines," Chen said. "But experience-based TCM is doubted by some people. We are now working to explain it in modern scientific languages." 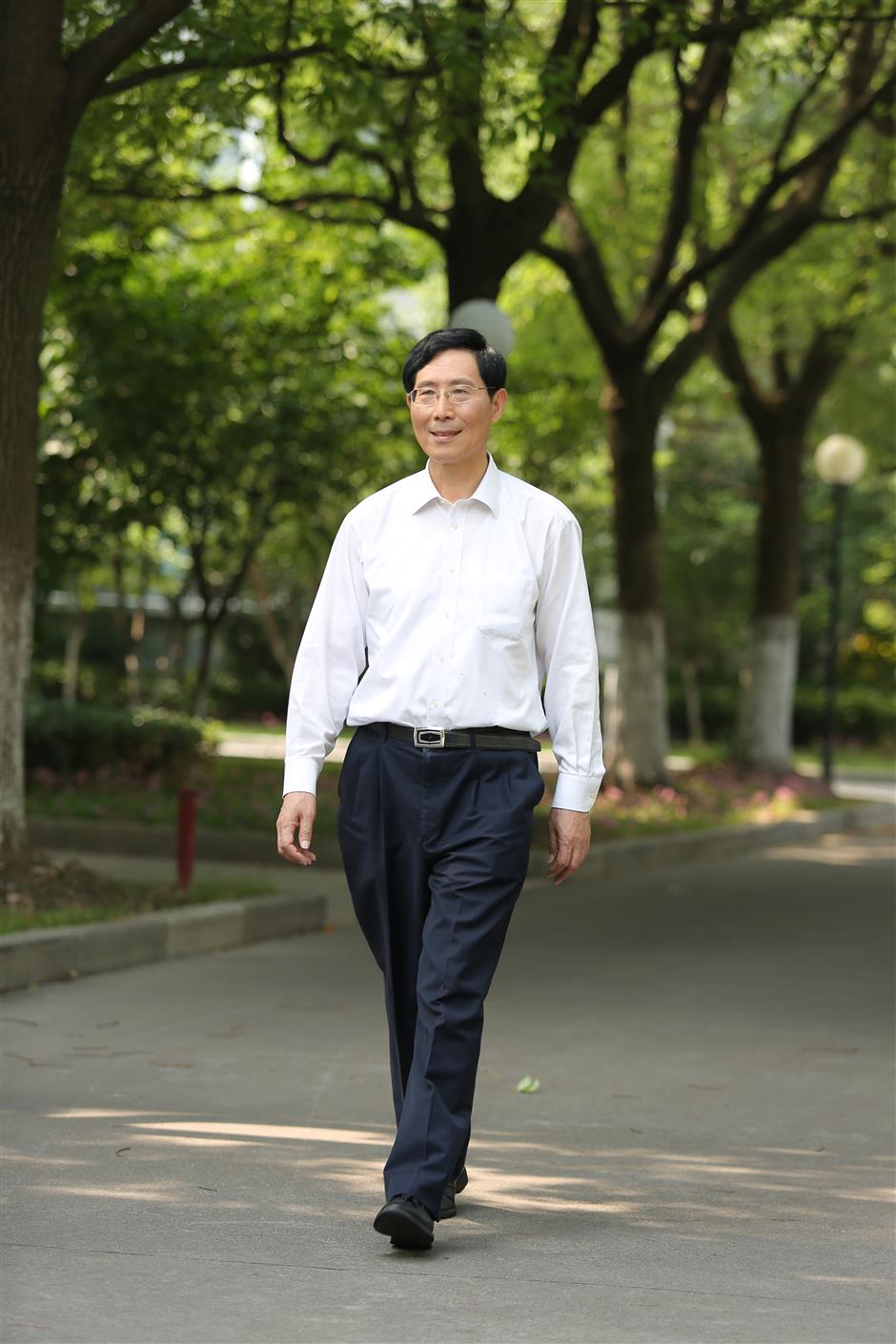