Old videos capture a city in the throes of change

It might be a bit hard for Shanghai residents born in the 1990s and early 2000s to imagine how their city looked around the time they were born.

But now they can get a glimpse of that past on the platform Bilibili, where Qin Xingpei, 75, is uploading all his old videos of the city under the title "Shanghai Impressions."

What do they show?

The city was filled with clusters of old-style residential blocks, and street vendors were selling typical breakfast food like Chinese pancakes, dough sticks and stuffed buns. 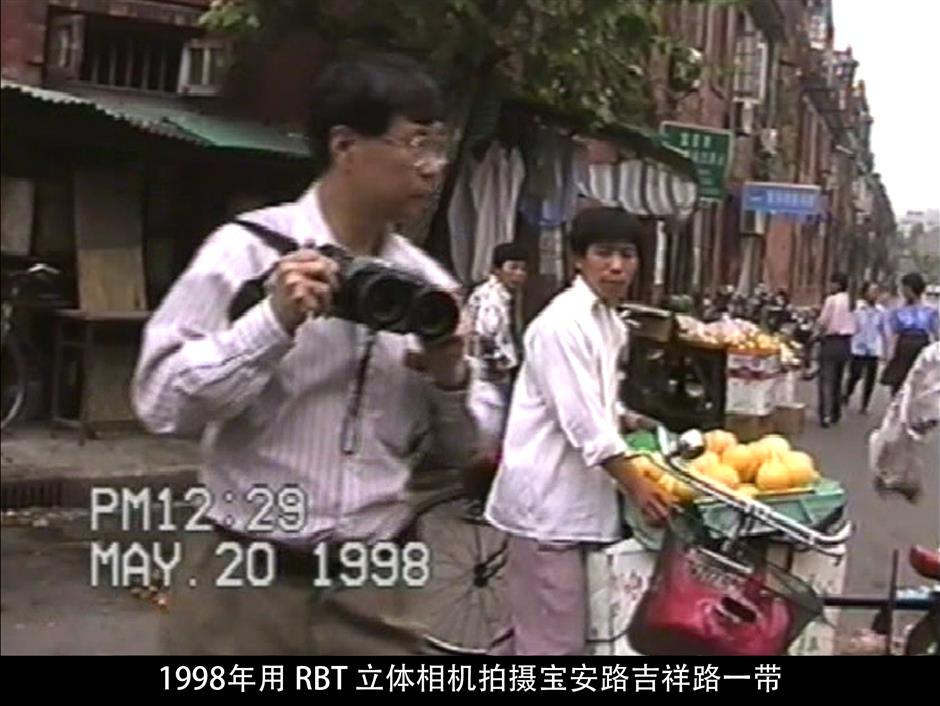 In 1982, Qin, then 36, left Shanghai to study in the US. He later settled in New York and became a medical worker. He filmed the videos whenever he was back in Shanghai, visiting his family.

In 1993, on his second visit, the Pudong New Area on the eastern shore of the Huangpu River from downtown, was beginning to undergo dramatic redevelopment as the city's trade and financial gateway to the world.

Nanpu Bridge, the first span over the Huangpu in the city, had opened two years earlier, ending the era of reliance on cross-river ferries.

To record what he saw, Qin used a Panasonic hand-held camera, which was popular among Americans at the time.

During his two-month stay in Shanghai, he wandered all over the city, often filming houses due to be demolished.

"I filmed Shanghai streets and what was happening on them," Qin told Shanghai Daily. "My original plan was to film one or two video clips on one road alone. But later, I changed my mind and thought all featured buildings deserved recording."

He explained, "Some buildings such as the Huileli on Fuzhou Road and houses on Dapu Road were already in the throes of removal. I was also interested in filming roads to be widened, like Fangbang, Zhaojiabang, Haining and Zhoujiazui roads. I found out about them from street postings and newspapers."

Favorite destinations of Shanghai residents were also on his filming list, including Nanjing Road, Huaihai Road and Yuyuan Garden. Sometimes he revisited places to record changes. For example, he visited Wanhangdu Road 11 times between 1995 and 1999.

The advent of video cameras allowed ordinary people to do what had been largely the realm of professionals, Qin said.

"When I returned Shanghai in 1994, I came with a new Hitachi camera that had better audio technology," he said. "Although I also had a Sigma single-lens reflex camera for clearer pictures, I still decided to use the video camera to capture dynamic sound effects."

Qin kept abreast of new technology. In 1995, he discovered stereophotography in the US, producing pictures that allow the viewers to feel as if they were at the scene. That quite amazed Qin, who later used both a video camera and stereoscopic camera gear to film Shanghai.

Whenever he was back in New York, Qin asked his younger brother to continue his film project and take stereo photos in the city.

"I didn't care about the cost much because I felt it was bang for the buck," said Qin.

He said every time he returned to the US, he would dream about coming back to Shanghai and resuming his filming.

"In those dreams, I stayed in Shanghai for many days but didn't film even one video, which made me very anxious," he said. "Sometimes in my dreams, I saw an old building I wanted to film, but found my camera was missing."

Such anxiety may have been related to the city's rapid development in the 1990s. Qin said he felt he was racing against time.

"I used to believe that filming a house would be much quicker than dismantling it," he said. "But later, I found I was wrong. There were still some old houses I wanted to record with my camera but failed to capture in time."

In the early 1990s, many people in Shanghai weren't familiar with hand-held video cameras. They would often stop and stare when Qin was filming streets and were usually happy to be filmed as part of the scene.

Some passers-by said they couldn't understand why Qin was filming old houses instead of all the new skyscrapers.

Qin's own memories center on Dongjiadu Road in the former Nanshi District, which popped up many times in his videos.

In 2015, Qin began sorting the videos and stereo photos he had accumulated. At first, he uploaded 52 video clips from 1993 on the video website Tudou.com. But later he found some of the videos had been deleted.

Two years ago, some netizens recommended that he try Bilibili, but he was stumped by the platform's membership test, which included many questions about the culture of animation, comics, and games.

Some sympathetic netizens helped him by posting his videos on Bilibili as a collection.

Qin, who finally passed the membership test, is now uploading other videos on the platform.

Through his videos, many younger Shanghai residents can see what the city looked like around the time of their birth. A few have even identified their families or themselves on the videos.

On a video Qin filmed in 1993, a father carrying a little girl dressed in pink passed in front of the camera. A netizen recognized the man as her father and the little girl as herself.

On a 1994 video, subtitled "Morning in Laoximen," an elderly woman with a Chinese pancake in her hand is shown buying soybean milk out from a breakfast stall. One viewer posted the comment: "That's my grandma!"

Another netizen asked Qin about the weather on April 28, 1994 – the day he was born. Qin checked his videos and found it was a sunny day. This year on April 28, Qin posted the relevant video to celebrate the netizen's birthday.

Other viewers have asked Qin if he had filmed this place or that, like a grandparent's long-gone home, because they wanted to see it.

"In the past, foreign photographers took many photos of Shanghai," Qin said. "But they didn't involve many ordinary places. As a Shanghai native, I filmed myself, my family, and areas where my friends used to live, work and entertain. I filmed streets in all local districts and the old-style Shanghai alleys where I and others grew up. What I wanted to film was a city undergoing massive change."

He added, "Old and new generations are proud of the city's rapid growth, but at the same time, we should never lose our heritage."

Ruan Yisan, a professor at Tongji University and expert in the preservation of historical buildings, said of Qin's video collection, "He is a special Shanghainese, and his videos are the city's precious memories."