Forest camp takes the heat out of education 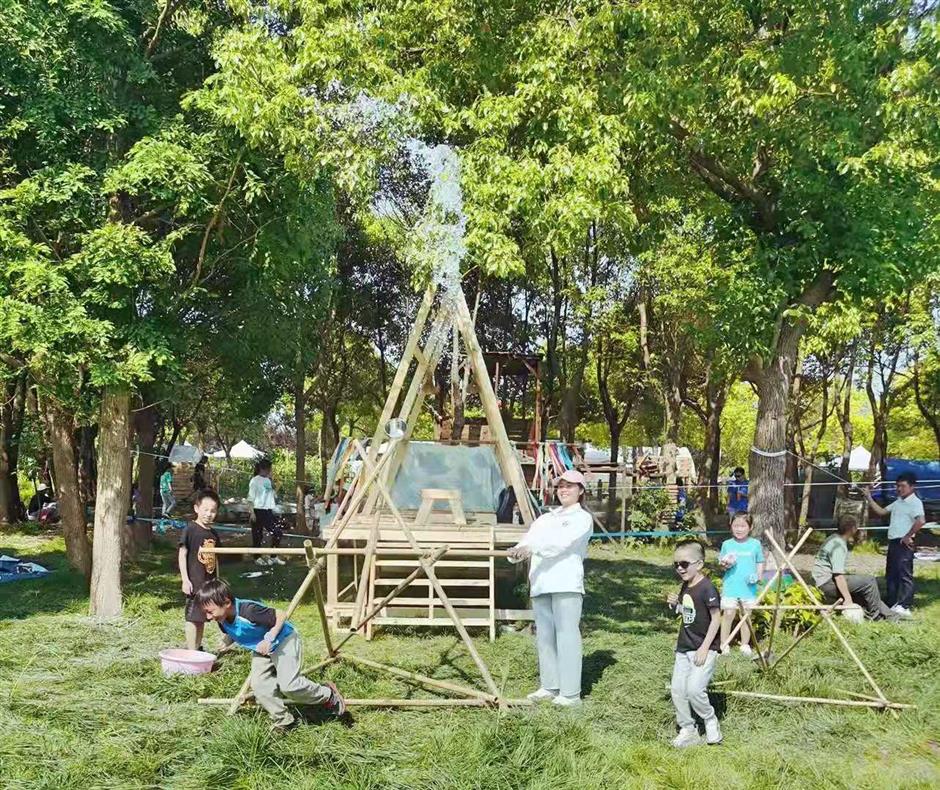 Children are helped to assemble a Roman catapult capable of hurling heavy stones.

On an unusually hot day at the end of May when most children downtown were probably advised to stay indoor, dozens of them were absorbed in a wide variety of outdoor activities in a forest near Zhongbu Village in suburban Shanghai's Zhaoxiang Town, Qingpu District.

They were at the Zhongbu Natural Forest Base, a 25-mu (1.67-hectare) camping education center. The children were mostly aged 3 to 6, with half of them from international schools or private bilingual schools.

A 5-year-old boy with chubby cheeks named Dylan had been working at a bench for a couple of hours, totally oblivious of the enveloping heat. Some parents might be alarmed at the sight of a 5-year-old vigorously hammering nails into a piece of wood, but the boy's father, who was sitting nearby, contented himself with occasional hints, but definitely refrained from saying "no."

Most of the parents there are successful professionals subscribing to the belief that parents should take a laissez-faire attitude toward children's play, or playwork (as dignified by progressive educators), so long as the children do not hurt themselves or others.

I asked the father if the boy ever hit his fingers, and he said it happened a couple of times, but with an indifference implying: "So what?"

When the boy finished, he sat on the stumpy, grotesque thing that would take some imagination to associate it with a bench, though both son and father took pride in his achievement.

When the boy asked his father if he could take the finished article home to show to his mother and grandmother, the father said he should address his request to the 48-year-old carpenter, Yang Surong, who was supervising.

Yang served a strict three-year apprenticeship and belongs to the old school of carpenters who handcraft woodwork by traditional means, but apparently in this new setting he had learned to keep his opinion to himself, and his only duty there seemed to keep an eye on possible accidents, at a distance.

Yang said that on the previous day some children had been so absorbed in carpentry that after a full day's work (normally from 10am to 4pm) would refuse to leave after 5pm. 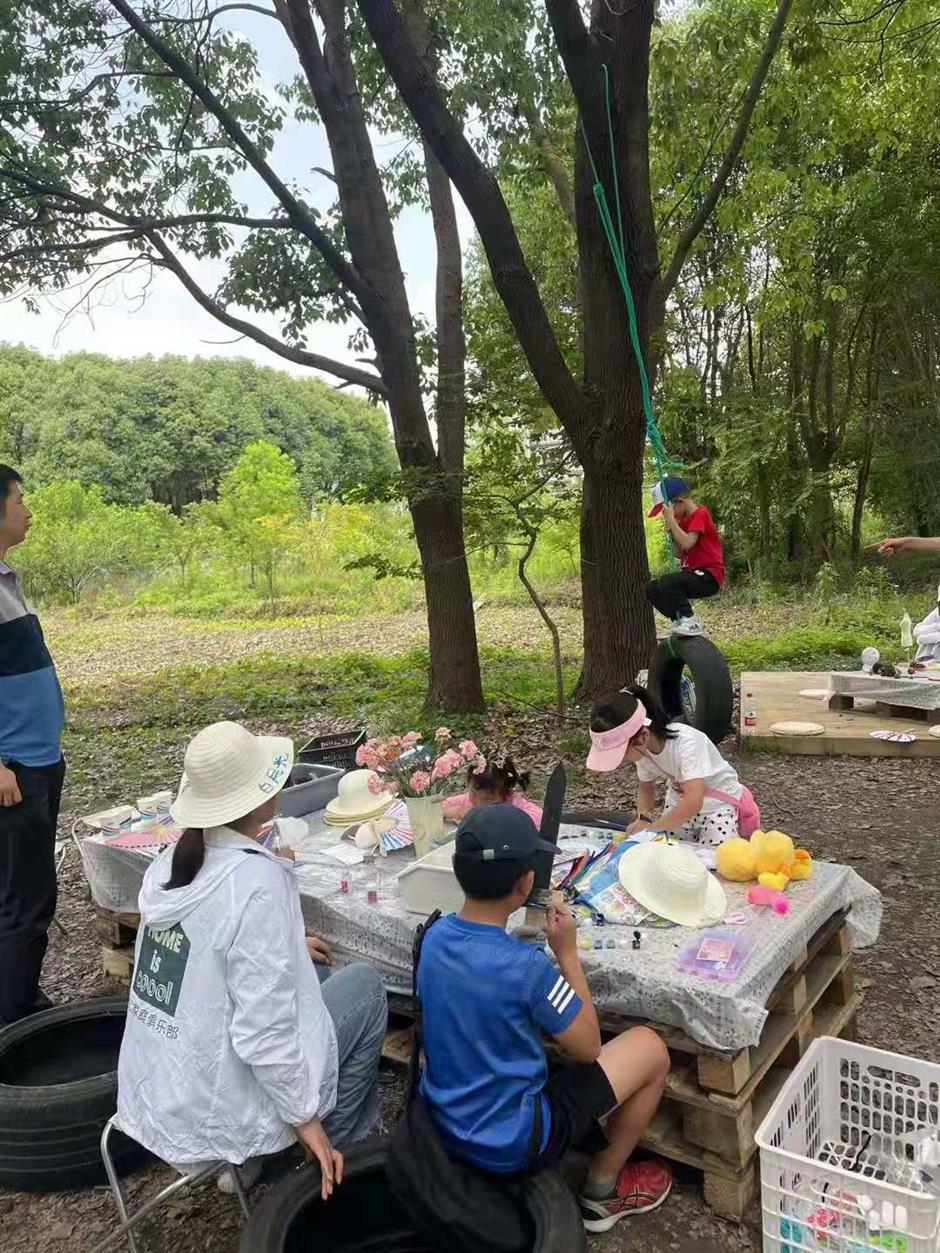 Max,10, is proud of the wooden sword he crafted at the camp.

This education base is not only informed by cutting-edge education philosophy, but also taps into the ongoing rural revitalization drive.

When it was launched in June last year, on a smaller plot of land, the villagers in Zhongbu found it bewildering, wondering: "How do you make money on this virtually bare ground?"

They have been surprised by the range of activities that can be carried out on this simple plot of land bereft of permanent construction.

By October last year, the village officials were sufficiently impressed by the camping project to ask to enter into a partnership, allocating a 25-mu plot as part of a rural revitalization project. The village also gave the camping entity another 150 mu of land which, pending deliberations by the local educational authority, might be developed into an education center.

Zou Zhuowen, a partner and senior tutor at the forest base, says new thinking is needed in devising a really good child's play.

The heavily tanned coach wears a uniform adorned with various outdoor activity associations. First among his over a dozen titles is his capacity as chief tutor with the Asian Camping and Education Association. A native of Zhaoqing in Guangdong Province, Zou has over 20 years of experience in camping education.

Zou prefers to describe his project as "outdoor education" rather than camp education, as the activities have a minimal impact on the environment. This philosophy precludes the possibility of extensive infrastructure investment, and the essential facilities at the site were the result of collaborative efforts between children and parents.

"By bringing urban kids here, we hope to reconnect them to the soil," Zou said, deploring that today a typical urban child's notion of soil is next to nothing.

Zou mentioned the nature-deficit disorder introduced in 2005 by Richard Louv in his "Last Child in the Woods: Saving Our Children from Nature-Deficit Disorder."

Alluding to the human cost of alienation from nature, the term caught on, and is now a rallying cry for an international movement to connect children to nature.

The badges on Zou Zhuowen's jacket testify to the senior tutor's experience in outdoor activities.

A recent survey of 1,300 people in China suggests that nearly half of urban children spent less than three hours a week on outdoor activities. There is growing evidence that a disconnect from nature leads to weakened sensory powers, attention difficulties, obesity, and a host of emotional and physical problems.

There is also research suggesting that students learning in natural environments perform better in reading and other subjects, since curiosity about the nature makes school subjects more interesting.

Zou said their perception of outdoor activities is strictly predicated on creating minimal disruption to the natural world.

"We are vehemently antipathetic to exploitation at the cost of the environment," Zou said. Take tree climbing for instance. "The idea is that we will leave the place cleaner than we first found it, in strict adherence to the 'Leave No Trace' principle," Zou said.

Their real strength lies in their readiness to improvise all kinds of teaching instruments in the natural environment. "For us, all things in nature, whether a blade of grass or a twig, could easily become instructive aids," Zou said.

"We're quite distinct from tourism, as we're every bit DIY, while tourism is chiefly about hardware and being served."

Like Zou, most partners in the project have young children, and they first got involved as a result of concern for their own children.

When Ashley Chen became involved, her child was the dominant consideration, in her belief that it took a whole village to bring up one child.

"As children grow up, their needs multiply, and they become more socialized. You can bring up a 3-year-old at home, but it takes a whole community to bring up a kid endowed with integrity and a sense of responsibility."

As her child and most of the earliest participants' children are old enough for primary school next year, they are considering launching a similar project catering to children over 6.

"This is an evolving endeavor among the like-minded about new possibilities of freeing children from an institutionalized childhood," Chen said. 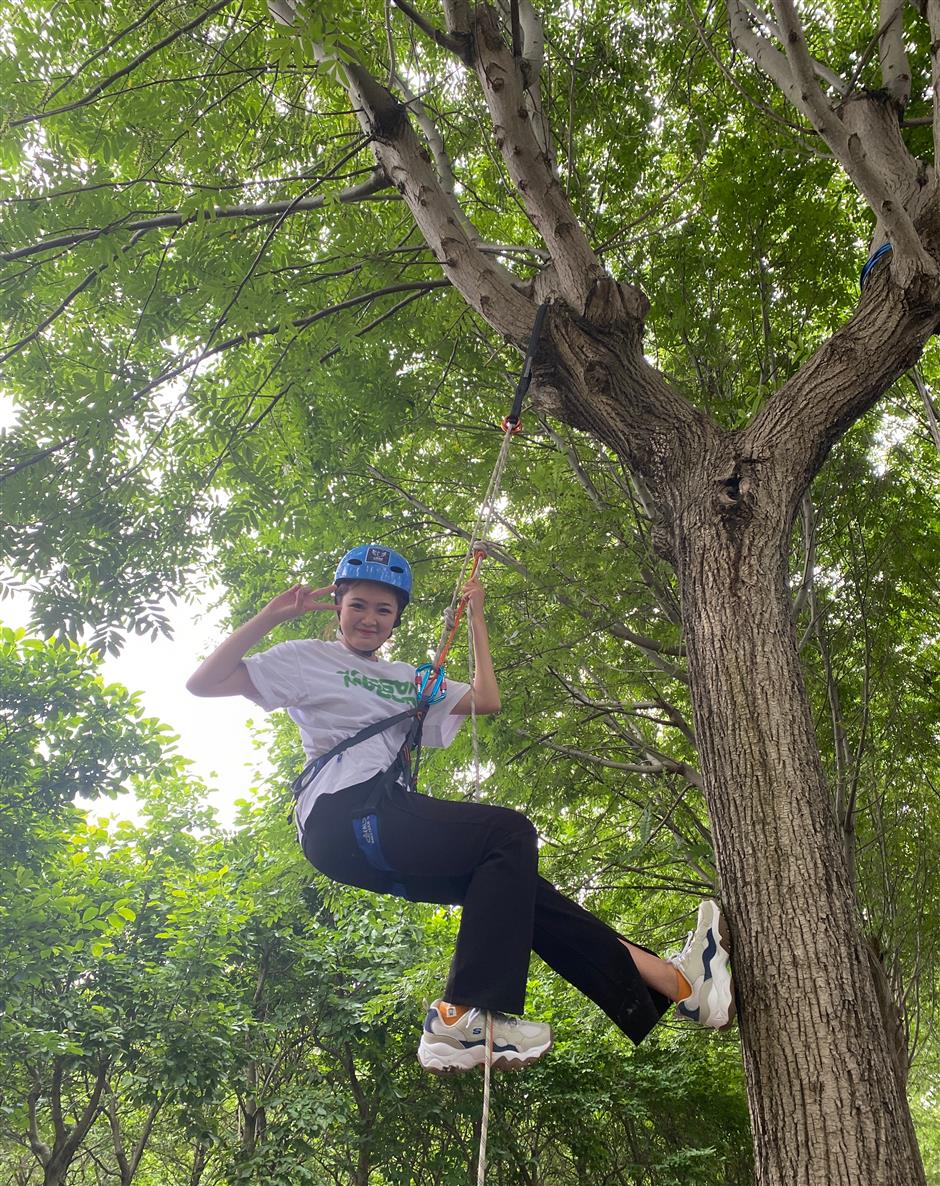 Liu Yifan, who is studying cabin crew services at the Shanghai Institute of Tourism, lowers herself to the ground after climbing a tree at the camp.

In a sense, the COVID-19 pandemic has accelerated this process. Before the pandemic "we seem to be fairly clear about success, and could give rough estimates as to what is in store for the kids, at least in light of our own experience," she said.

The pandemic has driven home the meaning of uncertainties. Education today should enable children to cope with such uncertainties.

Apparently, the tourism educators are already reassessing this outdoor activity from the perspective of new tourism.

Just 10 minutes' walk from the main camping site, some teachers and students from a tourism institute are practicing tree-climbing with some gear.

"This is an activity born of intimate interaction with nature, in a spiritually uplifting context, that might help shape the character of the participants, by making them more strenuous and tough, with a view to building a correct outlook of the world and values," said Wu Yun, dean of the School of Foreign Languages in Tourism, Shanghai Institute of Tourism.

Rather than turning out traditional tourist guides, Wu said our understanding of future guides should be upgraded, stressing "Gentle Organizer" skills typical of tutors in camping education. The tree-climbing activity will afford him fresh material in compiling textbooks and drawing up relevant standards.