Elephants on move raise questions about man and nature 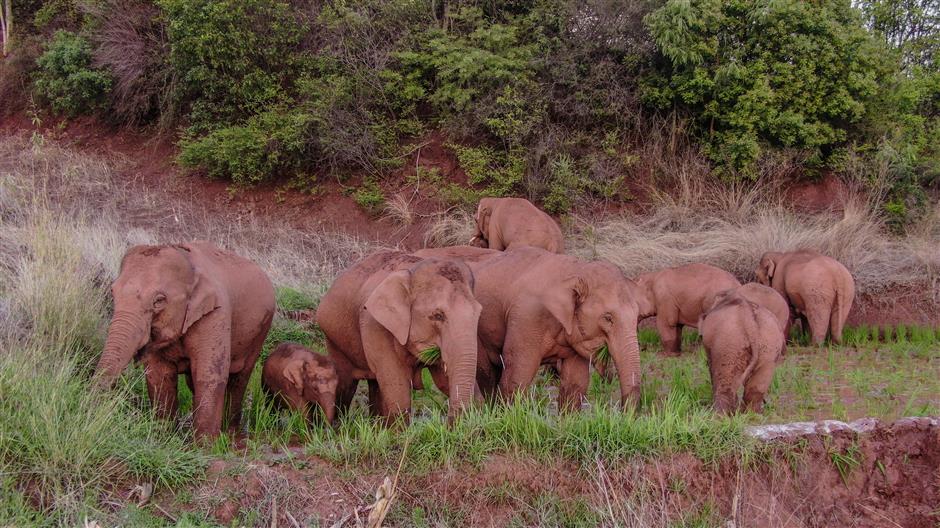 People in China, and indeed around the world, have been captivated by the continuing saga of a wild elephant herd on the march toward urban areas in the southwestern province of Yunnan.

The herd of about 15 pachyderms bolted from the Xishuangbanna National Nature Reserve in March and began migrating north in a trek so far spanning 500 kilometers.

The herd's encroachment on human habitats has been photographed along the route: elephants eating farm crops, poking their trunks through rural homes, taking baths in ponds, napping in a forest clearing, wandering along city streets.

The Asian elephants, an endangered species, passed through the cities of Pu'er and Yuxi, and were on the outskirts of Kunming, capital of Yunnan and home to about 8.46 million people. On Tuesday, the herd headed west to enter Yimen County in Yuxi, with the exception of one male elephant reportedly still in Kunming.

Authorities have been tracking their movement with drones and observers on the ground. Hundreds of emergency response personnel have been dispatched. Some are "armed" with tons of corn, bananas and pineapples to try to divert the elephants to a safe capture area; others stand ready to evacuate villagers that might be threatened by the herd. 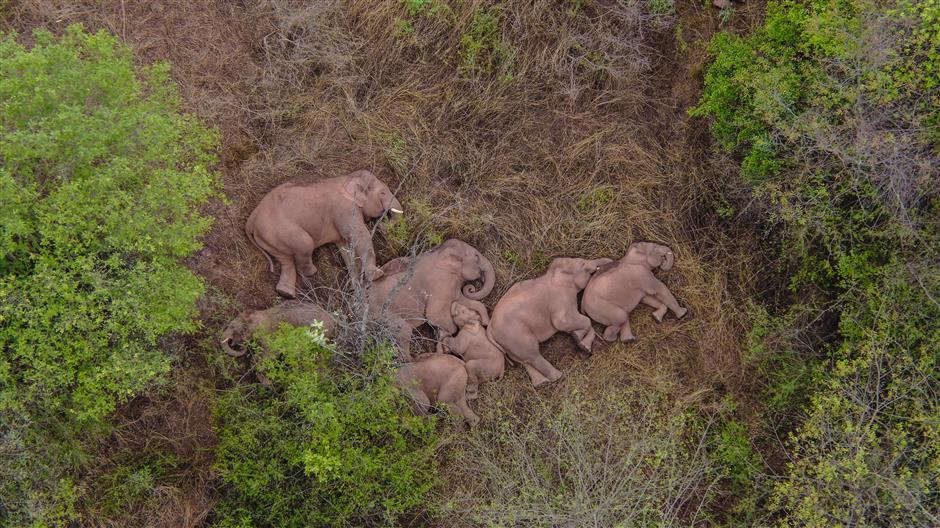 The big question lingers: Why?

Scientists seem to point the finger at mankind. As elephant habitats are overrun by farmed cash crops like rubber and tea, the hungry animals simply go on the move to find new food sources. The bananas, pineapples, corn and other crops grown in rural areas of Yunnan Province are enticing alternatives.

Zhang Li, a professor with the College of Life Sciences at Beijing Normal University, is among the scientists in that camp. He told China Newsweek that the elephants' natural habitat has been steadily shrinking over the years.

Li Zhongyuan, a forestry official in Xishuangbanna, agreed. He told the Global Times that the traditional diet is becoming depleted in their habitats, forcing them to forage on agricultural crops like corn and sugar cane.

The Global Times reported that the habitat area of elephants has decreased from 2,084 square kilometers in 1976 to less than 500 square kilometers today. That reduction has occurred as elephant populations under protective status have risen from about 170 in 1980 to 300. 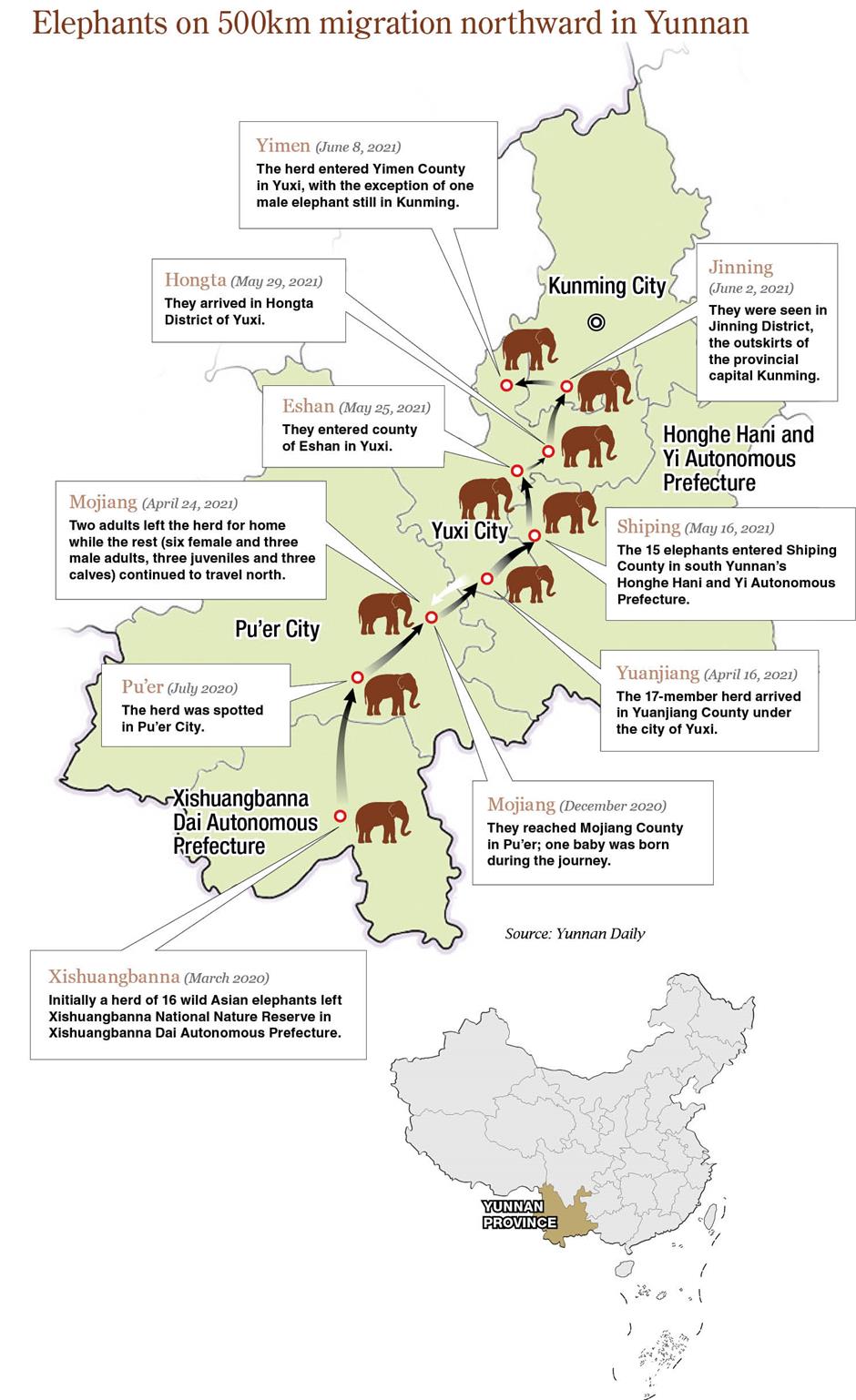 Beijing Normal University's Zhang and his research team issued a report in 2017 showing that rubber plantations in elephant habitat areas grew almost 25 percent between 1975 and 2014.

Incidents along the elephants' trek have been reported daily, sometimes to the amusement of the public. Once, a baby elephant fell into a ditch and had to be rescued by its mother. Another elephant reportedly got drunk after eating fermenting grain at a farm.

Some rural Yunnan residents have found elephants in their yards or pigsties. One farm couple reported that six elephants broke into their home and ate 200 kilograms of corn while the couple hid on the roof.

At a car dealership, one elephant was apparently intrigued by the vehicles, destroying 47 of them as he poked around.

In the 40 days since the herd has approached urban areas, the elephants have damaged more than 56 hectares of farmland and caused an estimated 6.8 million yuan (US$1.06 million) in economic losses.

The herd roams through a neighborhood in Shuanghe Yi Autonomous Township, Jinning District of Kunming city on June 4.

According to the Xinhua news agency, the herd late last week reached the Jinning District of Kunming. The on-site command center there mobilized 510 people and over 110 vehicles to block roads and try to guide the migration away from the city proper.

Authorities are reluctant to try to anesthetize the herd because there are so many elephants, and if one is taken down, the others are likely to become riled and go on a rampage.

Many netizens in China and across the world have posted their concerns about the welfare of the herd. Some have compared their daily monitoring of the elephants to a TV drama.

Japanese netizens likened the free roaming elephants to the popular anime series "Attack on Titan," dubbing them the "Attack of the Giant Elephants." Some said they were amazed to see the local government deploying as many as nine drones to monitor the herd around the clock.

In the past week, TV Asahi, Fuji Television Network and Tokyo Broadcasting System Television sent reporters to Kunming to report on the elephants.

Foreign wire services like Reuters and the Associated Press, and newspapers like The New York Times and Guardian have all filed stories on the tuskers' trek.

Many overseas media speak highly of China's quick emergency response to the elephant herd's migration as well as strong awareness on animal conservation.

Some foreign netizens commented that it's nice that the Chinese government has taken measures to keep the herd away from residential communities and no elephants have been hurt so far. 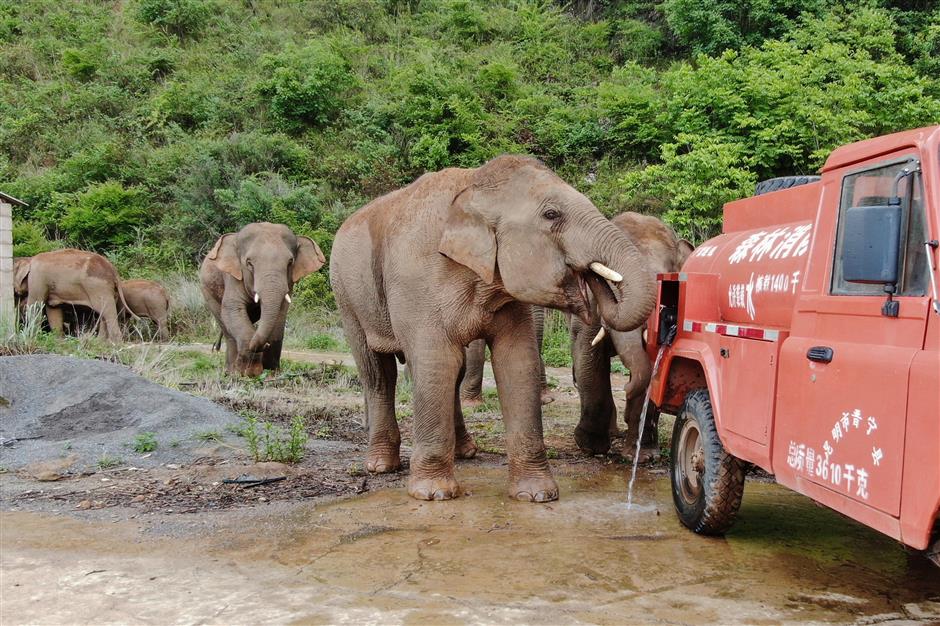 A fire engine provides drinking water for the herd in Shuanghe on June 3.

Meanwhile, another herd of 17 wild Asian elephants was found moving south to the Xishuangbanna Tropical Botanical Garden, which operates under the Chinese Academy of Sciences. The pachyderms got stuck there by heavy rain for more than 10 days, causing damage to some of the scientific facilities.

The garden hastily erected netting to prevent the animals from entering parts of the garden that are home to 1,350 rare and endangered plants.

Gu Bojian, a PhD at Fudan University's School of Life Sciences who worked for nearly six years in the Tropical Botanical Garden, said before rubber and tea, the Xishuangbanna natives grew fructus amomi, a traditional Chinese medicine used for curing digestive ailments. They cleared out trees and other plants that might vie for sunshine and nutrients with the plants, he said.

He said the government should build "forest protection channels" to allow the migration of elephant herds and also should provide subsidies to encourage farmers to grow fewer cash crops.

Sun Quanhui, chief scientist of the World Society for the Protection of Animals, offered a different explanation. He said the herd may be moving north to expand its population distribution and avoid inbreeding.

Elephants aren't the only animals to encroach on human settlement. In recent years, news about wild animals showing up in populated areas has become more frequent. The wild Siberian tiger attacking a villager in the northeastern Chinese province of Heilongjiang. Wild raccoon dogs appearing in more than 150 residential complexes in Shanghai. Polar bears entering villages in Arctic Russia.

The relationship of man and nature has once again become a hot social topic.

Wang Fang, a researcher at Fudan University's School of Life Sciences, told Xinhua news agency that the best way to resolve the problem is to restore and protect wild animal habitats, and to create "buffer zones" between cities and those habitats.