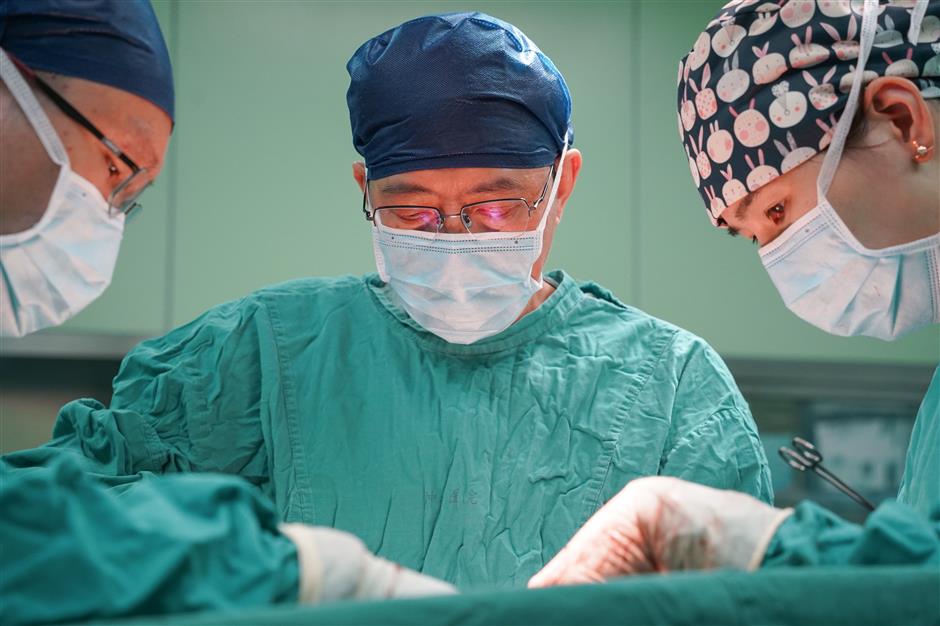 The Angelina Jolie effect is having an influence in China. After the Oscar-winning actress had her breasts and ovaries removed to reduce the risk of cancer, more people have become aware of the importance of genetic screening and preventative surgery.

A 53-year-old woman with the same genetic mutation as Jolie had ovarian removal surgery at Shanghai Cancer Center recently. She was diagnosed with breast cancer five years ago and her sister was found to have ovarian cancer last year.

Tests confirmed both had the same genetic mutation.

"Angelina Jolie is the most famous case with a family history of BRCA gene mutation and underwent surgery to remove her ovaries and fallopian tubes to prevent ovarian cancer," said Wu Xiaohua, director of the Shanghai center's gynecological oncology department.

Jolie had a double mastectomy to reduce risk of breast cancer in 2013 and ovarian surgery two years later. Her mother died of ovarian cancer and her aunt died of breast cancer.

Wu said genetic screening is extremely important for people with a family history of breast or ovarian cancer.

Although ovarian cancer is the No. 10 prevalent female cancer, its mortality is No. 1 as more than 70 percent of patients are diagnosed at a terminal stage.

"The risk of ovarian cancer for a woman before 70 years old is 1 percent, while those with a mutation of BRCA1 have a 56 to 60 percent risk and BRCA2 40 percent," said Wu.

"About a fourth of ovarian cancer cases are caused by a BRCA1 or BRCA2 mutation. In China, about 28.6 percent of patients' ovarian cancer is caused by these mutations," Wu said. "So testing for mutations of BRCA1 and BRCA2 is an important measure for early screening, especially among those with a family history."

"It is always too late to conduct treatment after showing symptoms. The treatment for ovarian cancer is poor right now, as there are no symptoms in the early stages," Wu said.

"More than 70 percent of patients aren't diagnosed with the disease until the terminal stage, so the five-year survival rate is only about 40 percent, making ovarian cancer the most deadly female cancer." 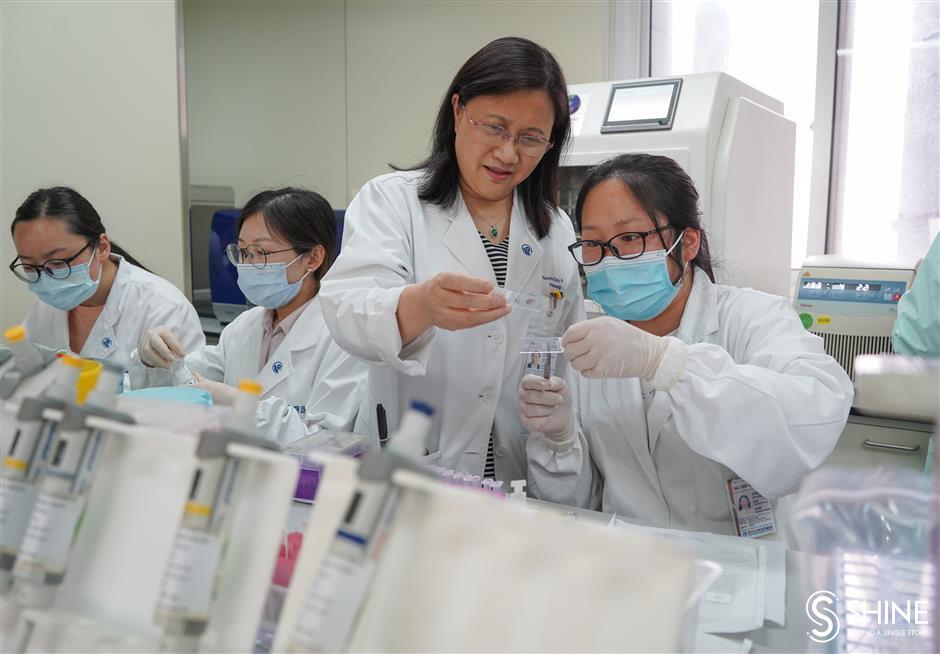 Dr Zhou Xiaoyan consults with pathologists in her department.

"It is very meaningful to people with a family history of breast or ovarian cancer for BRCA1 and BRCA2 mutation check. If a healthy person is detected with the mutation, she is under high risk and should receive close monitoring and even preventative surgery."

She said modern in vitro fertilization technology can block the inheritance of the mutation. Couples with a BRCA mutation can undergo preimplantation genetic diagnosis to select healthy embryos for transplant during IVF, she said. "Then the newborn baby won't inherit the mutation." 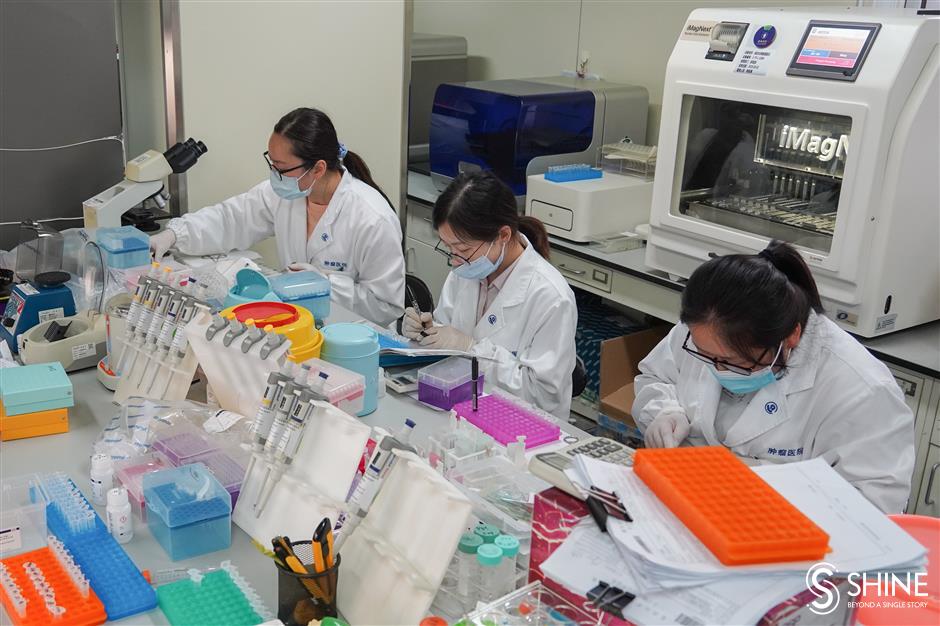 "It is good for celebrities like Angelina Jolie to share their stories about cancer prevention and control. Their examples can greatly attract public attention," Wu said.

Preventative surgery is minimally invasive and pathologists will carefully check the cut ovaries and fallopian tubes for traces of cancerous change.

Among patients undergoing preventative surgery to remove their ovaries and fallopian tubes, 5 percent have had ovarian cancer at an early stage, Wu said.

The center's 53-year-old patient said she wasn't aware of the importance of checks when doctors suggested genetic sequencing after she was detected with breast cancer five years ago.

"I felt worried until my sister was diagnosed with ovarian cancer. Fortunately, checks found another sister and both of my two daughters don't have BRCA mutation. Doctors said I should undergo surgery soon due to my age and my family condition, so I made a decision," she said. 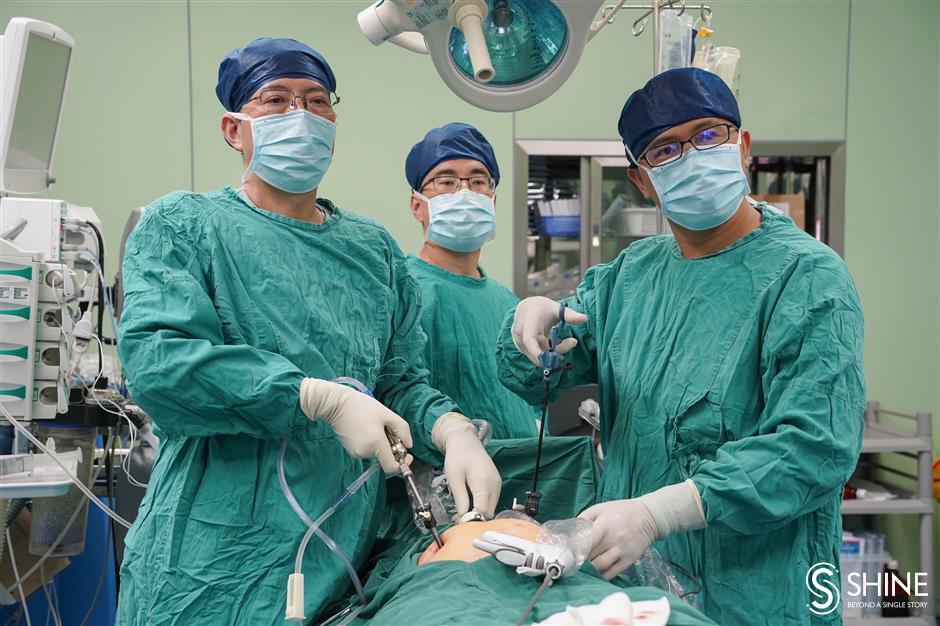 Dr Wu Xiaohua (left) and his colleagues at Shanghai Cancer Center carry out minimally invasive surgery on a 53-year-old patient to remove her ovaries and fallopian tubes.