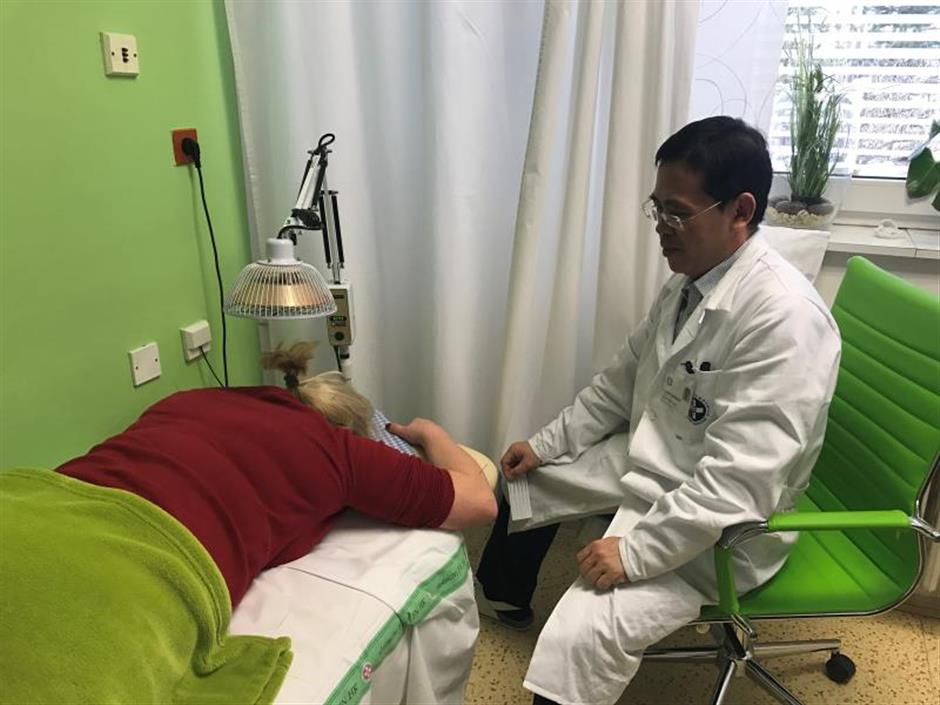 Chen Dongyu treats a female patient who has had neck pain for 20 years at Charles University's medical school in the Czech Republic.

Chen's 5,000th patient is a middle-aged man surnamed Zhu who suffered from years of great pain in his neck and stiffness on both sides of his trapezius muscle and shoulder. Before seeking Chen's help, he had visited several local hospitals, but the treatments had little effect.

Two weeks ago, he went to Shuguang Hospital and was diagnosed with hyperostosis and muscle strain caused by cervical degeneration, which has placed pressure on his nerves.

Chen decided to apply his special "talent" on Zhu – using a needle-knife to relieve the pain in meridian and tendon layers.

He chatted with Zhu to divert his attention, and then inserted a nearly 6-centimeter needle-knife into the nidus on his shoulders. Zhu soon felt less pain, and about 10 minutes later when Chen removed the knife, he found he could move his neck more easily.

In his practice, he found the nidi of some cervical vertebra and lumbar vertebra diseases, more common in young people, hidden in the meridian and tendon layers.

He then created his own therapy by introducing modern, minimally invasive decompression techniques into traditional Chinese acupuncture.

One of his patients was a 39-year-old woman surnamed Zheng, who does paperwork that requires her to sit for long periods of time. Her neck, shoulders and arms were often numb or tingled. She sometimes experienced great pain in those areas when she had meals or coughed, which severely affected her life and work.

Chen applied the needle-knife therapy on her twice and eliminated her pain.

Another 75-year-old male patient surnamed Tang experienced years of pain in his neck and shoulders, and was told by several hospitals he should have neck surgery. But Tang feared surgery and turned to Chen for help.

After an examination, Chen found a lesion that had expanded to the deep side of the meridian and tendon layers, a reasonable condition for surgery by doctors practicing Western medicine. However, due to Tang's age, surgery could prove risky. So Chen applied his needle-knife to both the superficial and deep sides of the layers.

Tang recovered well, and said it's like being relieved of a heavy burden on his body and now feels at ease.

Among Chen's foreign patients, there has been a soldier, scholar, businessman and consular officer. Last month, he applied his therapy on a French chef.

His unique therapy is also studied by foreign scholars. On his desk, there's a paper written by a postgraduate from the International Medical University in Malaysia on his therapy.