Is your car spying on you? Smart vehicles raise privacy concerns 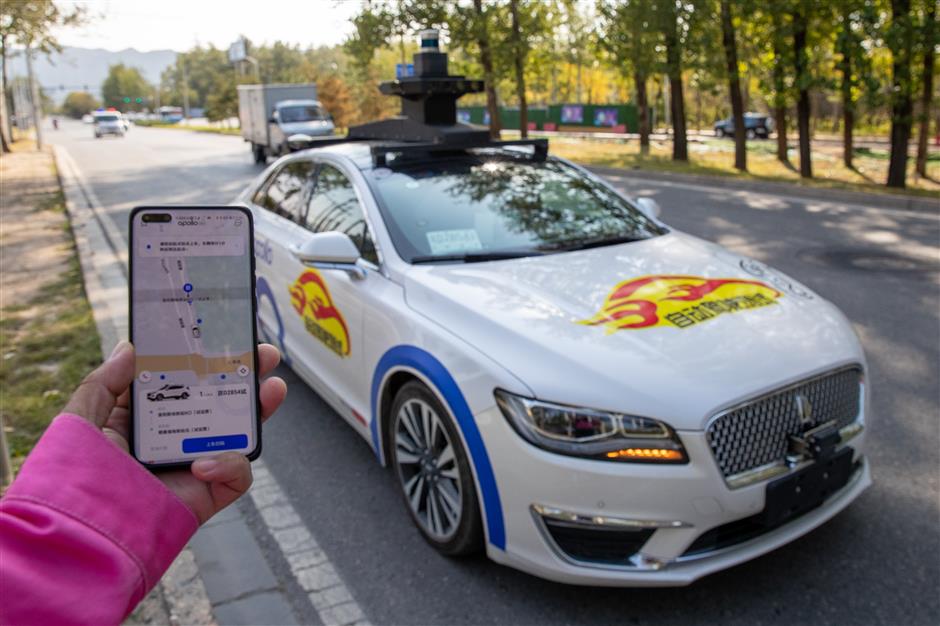 Baidu, the Chinese tech company known for its search engine, debut its fleet of autonomous taxis to the public in May, which is China's first self-driving service with no one behind the wheel.

Automobiles are no longer just engines, gear boxes and chassis. In the digital age, chips, software and data turn them into intelligence gatherers.

On-board digital camera and sensor systems capture information about drivers' behavior, location and environment, and even the voice commands used to connect with cabin Internet access.

But artificial intelligence behind the wheel raises concerns about information privacy and even national security. Where does personal information collected by smart cars go and how is it used? Could a hacker take over a car by remote control? Could intelligent driving systems be used to collect surveillance data in off-limit areas such as military bases?

Both the auto industry and government authorities are concerned about data safety.

It has published draft rules to require vehicle-related businesses, including carmakers, dealerships, online car-hailing services and insurance companies, to obtain permission from drivers before collecting personal and driving data.

The regulations also stipulate that any collected information be kept on the Chinese mainland. Data provided to any offshore entities must be approved by cyberspace authorities.

The public was invited to comment on the proposed rules in a feedback period that ended on June 11.

Yang Hua, 33, a mechanical engineer in Shanghai, applauds the new rules, though he still worries that they might not be far-reaching enough to prevent disclosure of personal information.

"I won't buy a smart electric car, not even with the license-plate incentives that come with them, because I am very cautious about my personal information and try to protect my privacy as much as possible," he said. "I even use a pseudonym when buying online and when a package arrives by express delivery, the first thing I do is to rip off the label with recipient information on it."

Other consumers wonder what all the fuss is about.

"The rules give users the right to decide what kind of personal data can be collected by auto companies," said Zhang Yueling, 29, a civil servant. "I don't particularly mind data collection by auto companies because I think it could be used as evidence if accidents occur. The only thing is that data should be supervised by a reliable third party or the government."

Zhang added, "We already live in a digital era without privacy. All these advanced technologies, like facial recognition and various apps, steal our personal information. Why make a fuss about auto data?"

"In enacting rules to regulate such data, China is at the forefront globally," he said, adding that the issue of smart auto data is complex, involving personal privacy, government-promoted data systems and the stepped-up development and manufacture of smart cars and autonomous driving.

According to Nikkei Asia, nearly half of new cars sold in 2020 are capable of connecting to the Internet. In China, the driver of a connected car can open a window, adjust cabin temperature and play music or videos using voice recognition technology through the Internet.

"In the era of autonomous driving, safety covers not only the physical operations of the cars but also autonomous-driving data," according to China Association of Automobile Manufacturers.

In May, at the Shanghai International Automobile Industry Exhibition, a Tesla consumer protested that US-based electric carmaker Tesla should take responsibility for her malfunctioning, newly bought Tesla Model 3. She said the malfunction had caused her father injuries.

Tesla denied any liability, citing driving data collected while the car was being driven. The woman, in turn, said the data were unreliable and accused the company of altering the information.

Tesla subsequently announced that it is developing a platform for car owners in China to access data generated by their vehicles. The platform will be launched within the year, the company said.

It was the first time that an automaker in the world's largest vehicle market promised such consumer access.

Tesla, which has a major car manufacturing site in Shanghai, also said it is establishing a new data center in China where local Chinese data will be stored and not allowed out of the country.

Tesla is not the only company taking steps to address the concerns.

In the era of artificial intelligence, the company said, data have become the core force behind the brand and user privacy and protection are very important. Zhiji pledged to use data properly and even reimburse users for that use.

Zhu Wei, vice director of the Communication Law Research Center at China University of Political Science and Law, noted that information collected by smart cars may be critical in deciding accident liability.

"Is an accident caused by improper driving or some malfunction of the vehicle?" he said. "Control of the use, transmission and storage of car data is a fast-emerging challenge for the industry and for regulators worldwide."

There are no present laws or rules regulating the ownership of such data or stipulating how the data can be accessed and by whom.

Smart cars are believed to collect all sorts of data, including the external driving environment, vehicle operations, driving behavior. It all goes into the storage of auto companies.

"Most auto companies only collect limited driving data, I bet," said Gong at UBS. "As for onboard cameras taking environment photos, I think it is almost impossible. Photos and videos generate tremendous data, and the highest-capacity hard disk drive would be full instantly. The back-end server couldn't accommodate the huge amount of data." 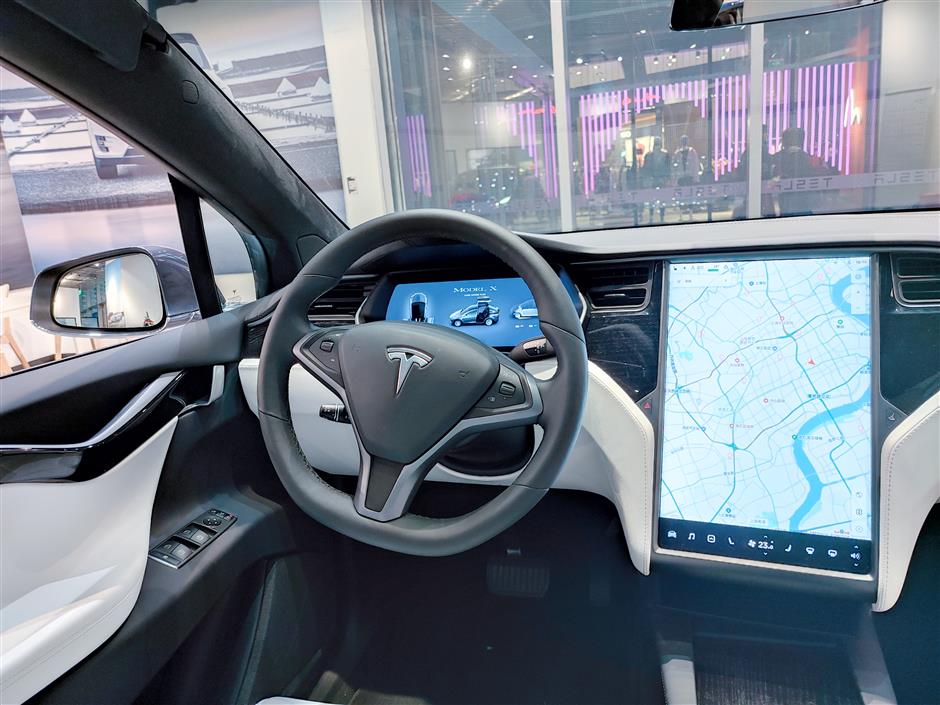 A Tesla electrical sedan equipped with a display service enables a user to control the car by touching the screen. 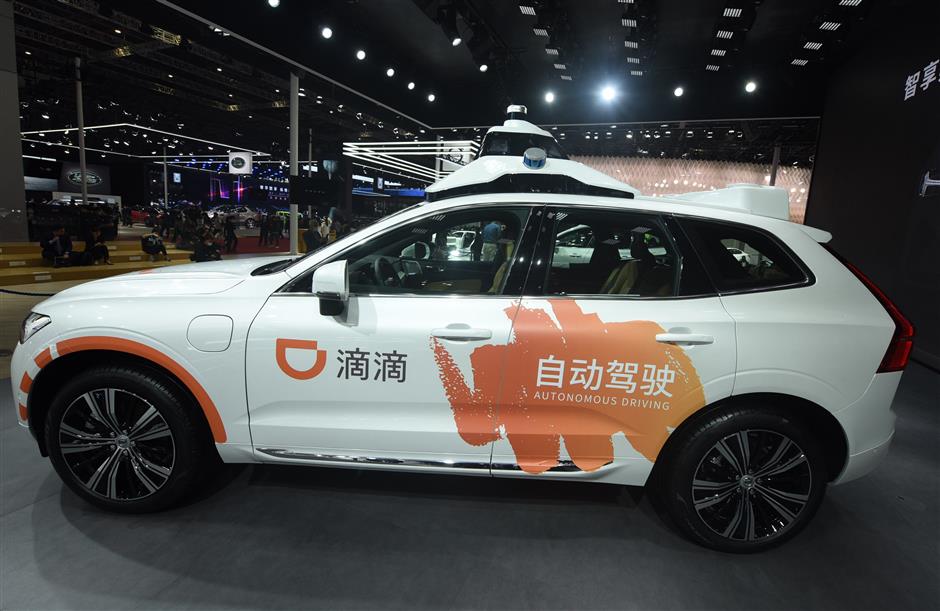