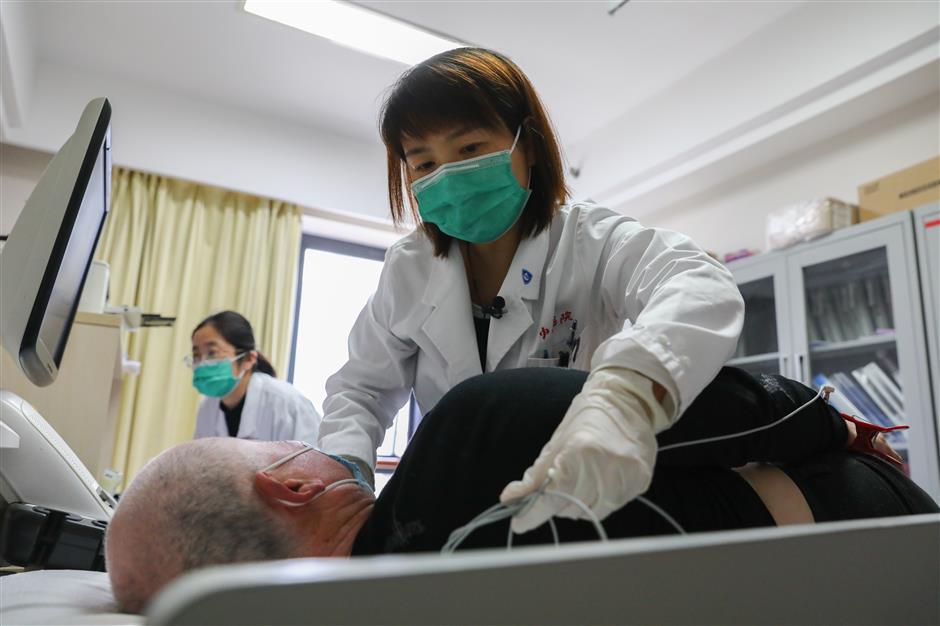 Chen Haiyan has a cardiac checkup on an elderly patient at Zhongshan Hospital.

Do you know how alcohol is metabolized? Just imagine a baby taking a shower.

In Dr Chen Haiyan's cartoons, a drunk baby will see his clothes made of "hydrogen" taken off by a kind of enzyme. The baby with pants, called "aldehyde," will be naked after another enzyme effect. However, a shower (tricarboxylic acid cycle) will make the baby clean again, called carbon dioxide, with water.

Chen is a cardiac doctor at Shanghai's Zhongshan Hospital affiliated to Fudan University. The baby story is one of over 50 cartoons created by her in a book that has been sent to each local resident's home or community in Shanghai this year to spread health knowledge. She finished the pictures in this book in about two months during her spare time.

Her readers have given her the nickname of "Doctor Swallow" because her given name includes the Chinese character "Yan (燕)" which means swallow.

In 2000, Dr Chen went to Shanghai Medical College of Fudan University and has worked for the hospital since she graduated. "Although I am proud of myself to be a doctor, the process of studying medicine is so boring because so many articles with hundreds and thousands of words need to be read and remembered," she said. "I often take notes on the textbooks by drawing to help me remember the knowledge."

Seven years ago, with the encouragement of her colleagues, she began to create cartoons about diseases and health.

She, her son Dongdong, and her husband Leo Zhang are the main characters in her work. Sometimes they are people who like vegetables; sometimes they cover their mouths and noses with their elbows when they sneeze; and sometimes they are sufferers when a person smokes in a no-smoking area.

A pocketbook is always in Chen's bag when she goes out in case she is seized by sudden inspiration. One picture takes her five to 10 minutes to draw. "It's said one picture equals 1,000 words," Chen said.

Her cartoons are mainly for children and teenagers because many diseases, such as hypertension, can be prevented but are hard to cure after they happen, she said. "When I saw a person in his 30s paralyzed because of hypertension, I felt sorry for him and thought there was something I could do for the public.

"After the students are taught in the class, they are likely to show what they've learned to their parents and grandparents," Chen said. "The whole family will benefit from the health knowledge I share."

Many parents didn't know about their high blood pressure until their children help them measure it at home. They then were very worried about it and asked the teachers for Chen's contact number. She explains the disease and tells them what they can do to control their blood pressure.

In 2018, she showed her cartoons to students at a primary school in the Tibet Autonomous Region.

It was a journey without a plan. Her friends sponsored the school and the students there. They told Chen on a Friday that three days later they would visit the school for a week and wanted her to come with them to teach basic health knowledge to the students.

Chen said yes without a doubt. She asked for leave and was supported by the hospital. People who visit the plateau often take traditional Chinese medicine to prevent altitude sickness. Chen had no time but she was lucky that she didn't suffer such illness during the week. 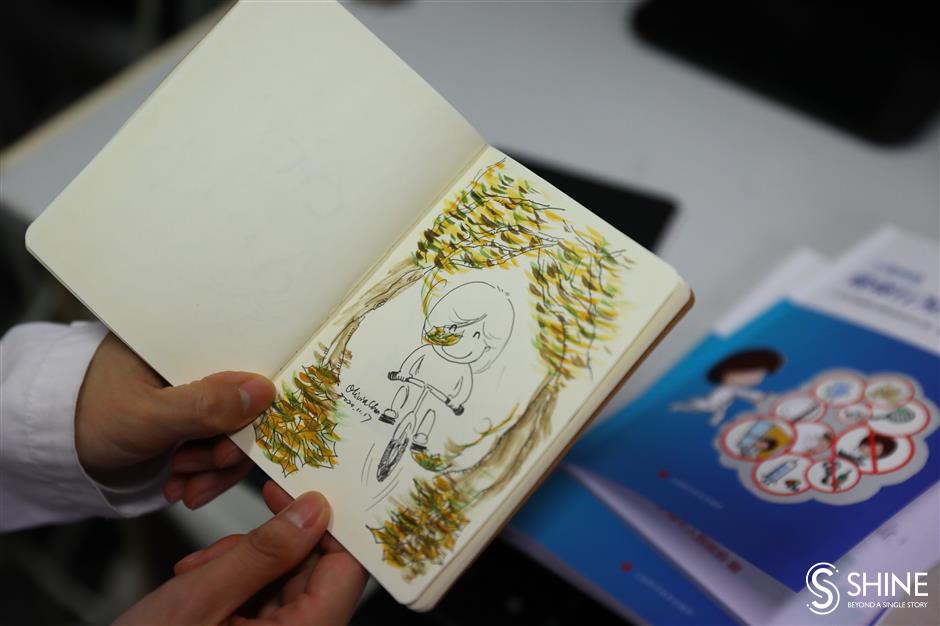 Chen shows one of her cartoon creations.

She took 10 devices to measure blood pressure and some stethoscopes at her own expense for the children on the plateau.

In the first class, she walked into the classroom, picked up the chalk and drew a cartoon image of herself on the blackboard. She told them she's Doctor Swallow. The children were attracted by the special introduction and took to this teacher from a city over 4,000 kilometers away.

"They are curious about everything new," Chen said. "When they used the stethoscopes and listened to their heartbeats for the first time, I could see their eyes shining with excitement."

Students in the mountainous areas in Jiangxi and Jiangsu provinces have also been taught by Chen online. After talking to their teachers, Chen added daily health tips, such as brushing teeth and washing hands, to the course.

"Many students are left-behind children. Their grandparents care for them but they don't attach importance to personal hygiene," said Chen. Many small but effective devices, like sandglass timers, were bought by Chen and sent to the remote areas.

"The teachers told me that now when they brush their teeth, seeing the sand dropping in the glass, they think it is an interesting mission and are willing to do it in a correct way," she said.

During her spare time, Dr Chen also makes and publishes animated cartoons about heart tests and diseases on video-streaming platform BiliBili, teaches parents and children through family games in Shanghai over the weekend and gives free medical consultations for senior citizens.

She said she feels tired sometimes but drawing cartoons is her best way of unwinding.

"In 2014, I began to create cartoons for science popularization because I was stressed out during that period," she said. "Drawing can let me forget the time. The more tired I feel, the more I draw."

Nowadays, many posters, brochures and cartoons broadcast on TV about health knowledge in the public areas of the hospital feature the pictures Chen created.

"I printed seven kinds of brochures about high blood pressure, coronary disease and heart examination," Chen said. "When patients cannot understand what I said, I will show them my pictures. I am glad that many patients told me they like it so much."

In the near future, she said she will publish another book on health and develop the content of online courses for more students in remote areas.

"As a doctor, I think what I do is for the public good," Chen said. "Like what my instructor told me when I hoped to join the Communist Party of China in the first year at university, one should be motivated to do good for the country and the people, not to gain some personal fame." 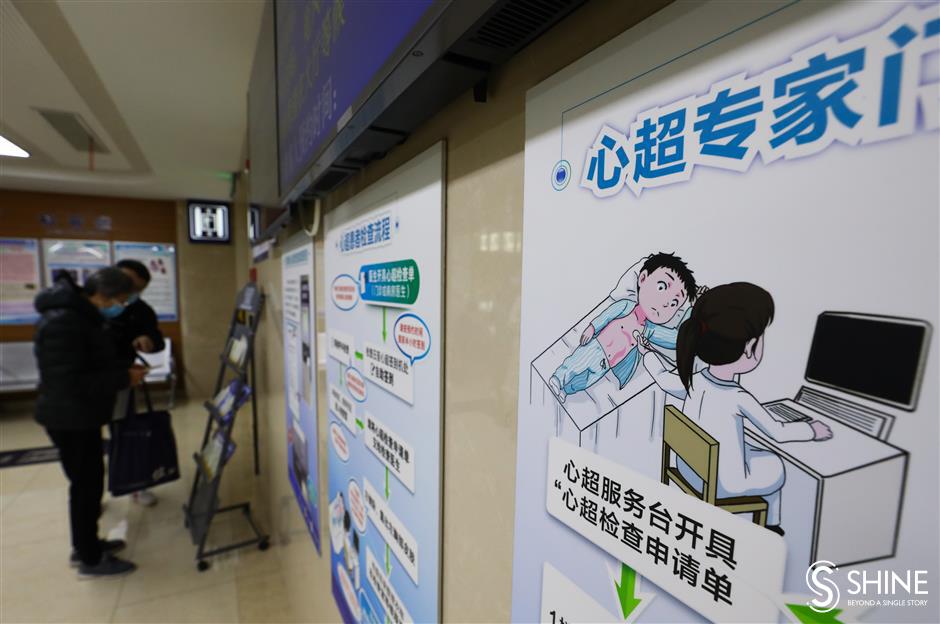 Posters in the public areas of the Zhongshan Hospital feature the pictures Chen created.