More than 40 foreign reporters visitedthe Memorial of the First National Congress of the Communist Party of China and the Lingang Special Area last week. 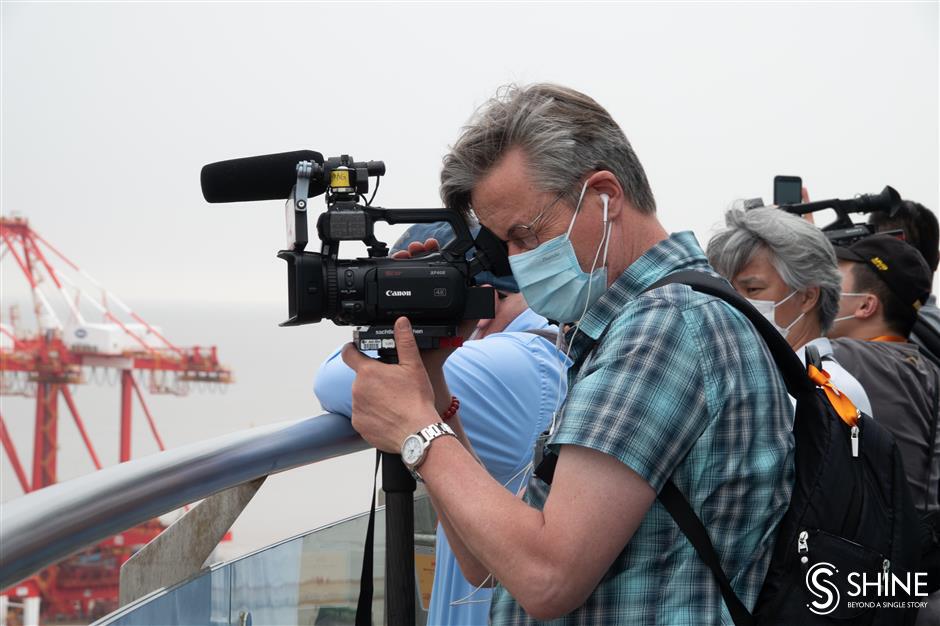 Reporters from overseas media visit the Lingang Special Area to learn about the city's development.

To celebrate the 100th anniversary of the founding of the Party, the memorial hall has been expanded four times to 3,000 square meters and its exhibits increased to 1,168 from 278. Seventy-two versions of the Communist Manifesto are on show.

Party history is recorded in the memorial hall, now preserved as an exhibition hall and museum on Xingye Road in Xintiandi, downtown Huangpu District.

"Why was the CPC born in Shanghai? Was it accidental or inevitable?" a Japanese reporter asked.

Zhang Yuhan, a researcher at the Memorial, explained: "In the early stage when some Party members were preparing to establish the CPC, they had little experience and had to ask help from Communist International, an international organization that advocated world communism. The experts at Communist International who came to China to help were mostly foreigners.

"In other cities in China at that time, a foreigner was very conspicuous, which was not in favor of establishing a Party as such activity had to be held secretly to avoid attention. Shanghai already had many foreigners at that time due to its favorable port location and it was common to see foreigners walking in the streets. This is the main reason they chose to hold the First National Congress in Shanghai, the symbol that the CPC was born."

The reporters then visited the Lingang Special Area, about 100 kilometers from the city center and part of Nanhui New City in Pudong New Area.

The Exhibition Center of the Lingang Special Area of China (Shanghai) Pilot Free Trade Zone, Yangshan Phase IV Automated Terminal and Siasun Robot & Automation Co were where they learned more about the further opening-up of Shanghai and China.

They watched videos about the history, layout, current achievements and plans of the Lingang area and saw how China's industries revived during the COVID-19 pandemic and China's will to develop economic globalization.

During the pandemic, the capacity and efficiency of the Yangshan Phase IV Automated Terminal, the largest container port in the world, remained stable and was even better in terms of imports, said Dong Haitao of the Integrated Free Trade Zone of the Lingang New Area Management Committee.

"Normal operation of port was very important in the revival of the global supply chain," said Fang Huaijin, vice president of Shanghai International Port Group Co Ltd, during the reporters' visit to Yangshan Port. "The port maintained its normal operation at the height of the pandemic, which I think was the best way to resist COVID-19."

Yangshan Port, an important component of the convenient integrated transport system in the Lingang Special Area, enables China to connect with the world more easily and closely.

"Automation" is the key word in the area. Fang said its automated equipment and system has also been used in some Southeast Asian countries.

The reporters' last visit was to Siasun Robot & Automation Co. Yang Luo, its president, introduced the company's products and technologies. He showed reporters how flexible robotic arms can be and free workers from extreme working conditions.

The reporters learned how Lingang, as a new area with many technological companies, is gradually expanding its industrial scale and playing an even more important role in the Yangtze River Delta region.