The Chongming narcissus grown by Shijiahuaxiang are displayed inside the Huayi Pavilion at the 10th China Flower Expo.

Chongming Island, as the flower-growing hub of Shanghai, is the ideal site to host the ongoing 10th China Flower Expo, but it is local growers who bring color, variety and floral magic to the event.

Among the local growers are island natives Shi Hao and his father, 65-year-old Shi Kesong.

Father and son operate a flower farm in the town of Xianghua, not far from the sprawling expo site. Their narcissus and those grown by other local farmers feature in several locations.

"Expo allows us to have a wider vision by seeing the results of other flower growers and suggesting ways we can improve our cultivation," said Shi Hao.

The floral exposition on the island ends on July 2. It encompasses 180 outdoor exhibition zones and 64 indoor areas.

The narcissus genus includes daffodils and jonquils. However, the Chongming varieties are among the more uncommon. They have double petals and a more intense fragrance.

Today's cultivation on the island can be traced back to the 1920s and 30s, when Chongming growers found that a narcissus variety from the southeastern province of Fujian was especially popular among Shanghai flower lovers.

"The story goes that in 1920, an ancestor named Shi Gulang took some Chongming narcissus with him when he visited a relative's home in downtown Shanghai," said Shi Hao. "While taking a rest by the roadside, two foreigners came up to him and asked about the price of the flowers. Since Shi Gulang couldn't speak English, he raised two fingers to indicate two cents. But the foreigners gave him two dollars. That convinced him to expand narcissus growing." 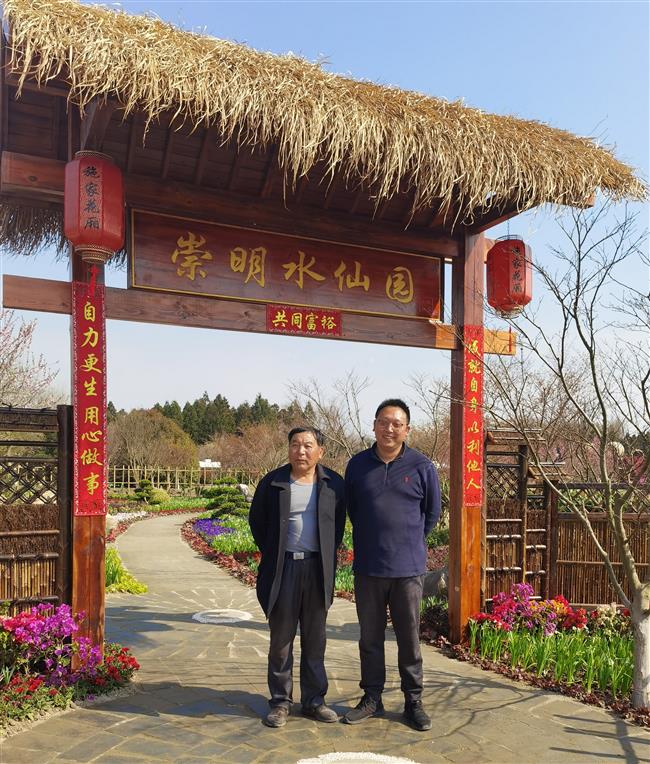 Shi Kesong (left) and Shi Hao stand at the entry of Chongming Narcissus Park at the flower expo.

By the early 1930s, some 33 hectares of land on Chongming was devoted to narcissus growing, and 80 percent of the blooms sold in Shanghai came from the island.

After the founding of the People's Republic of China in 1949, the Shi farm expanded into a large plantation. Shi Kesong spent his childhood in the greenhouses, helping adults peel back the outer coverings of the bulbs to encourage earlier blooms.

The family enterprise, along with other narcissus cultivation, declined, however, in the 1960s and early 70s, and the flowers mostly became wild, growing along roadsides.

After China's reform policies adopted in the late 1970s, Chongming farmers tried to revive narcissus growing. But they had trouble getting bulbs from Zhejiang and Fujian provinces to grow again on the island. Despite government support, the revival was unsuccessful, and farmers like the Shi family turned to other flower varieties. 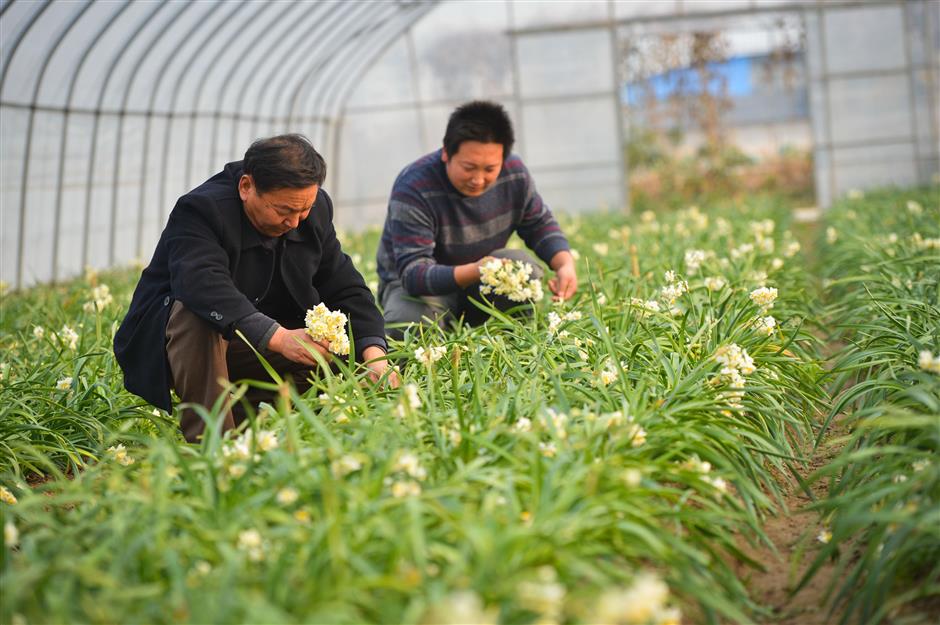 Shi Kesong (left) teaches his son Shi Hao how to grow Chongming narcissus at a greenhouse.

In 2002, Shi Kesong asked his son if the family should return to narcissus cultivation. They agreed to give it a try. They visited each of the 10 local farms that were once engaged in narcissus growing and found some wild plants. The bulbs were collected.

With the support of government, the Shi family started a narcissus plantation and set up a farmers' cooperative in 2009. Two years later, their narcissus entered the flower market.

In the beginning, sales were poor. Father and son realized they lacked a good marketing plan. They used some creative thinking to try to promote the flowers, including narcissus grown in small pots. 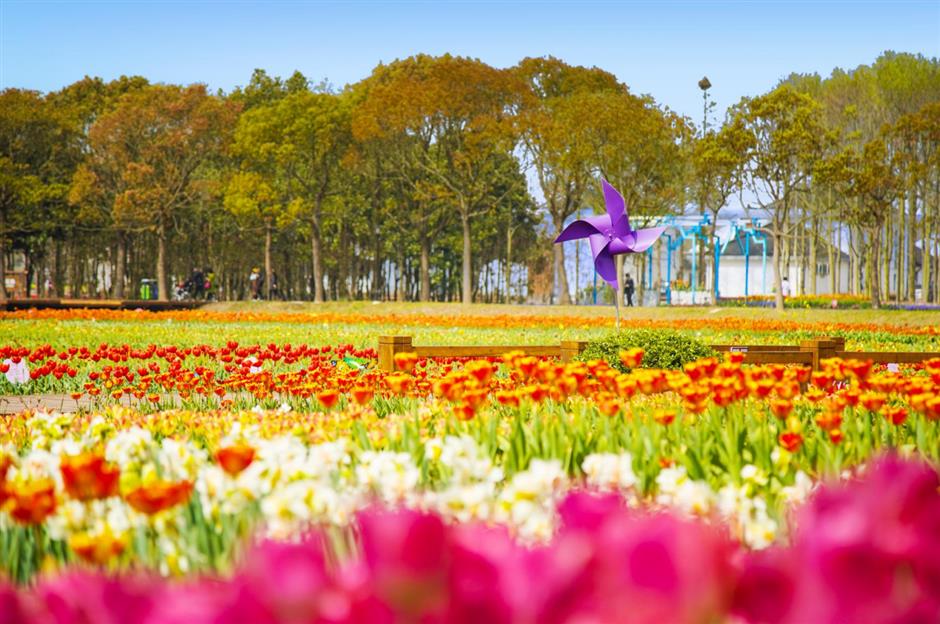 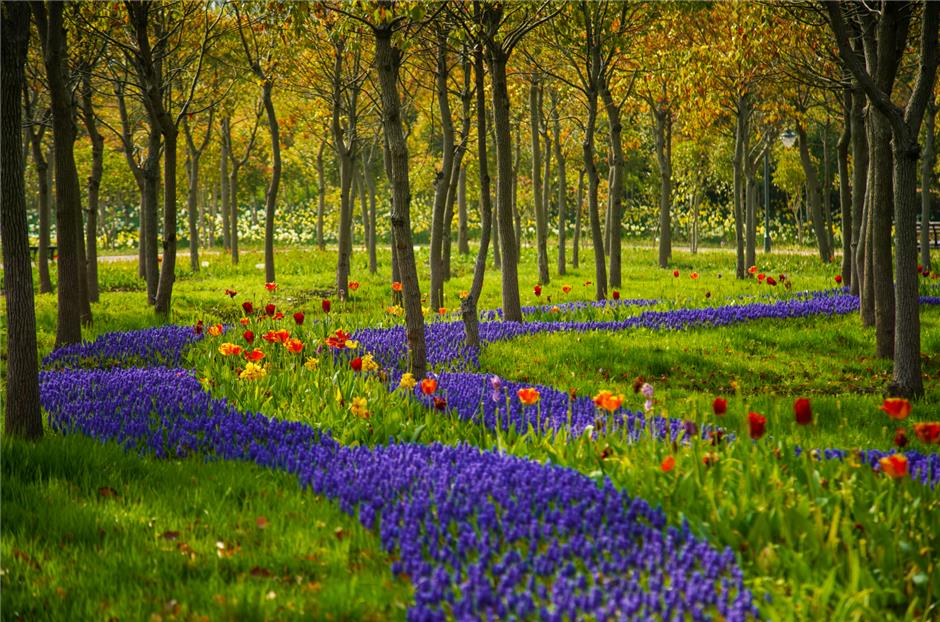 The Shi family today has nearly 110,000 square meters of greenhouses and several freezers at the plantation for cold storage of the bulbs. The coldness brought by freezer allows narcissus, which usually bloom in winter, to blossom in different seasons of the year.

About 10-minute ride away from the flower expo site, a colorful array of tulips blooms in Hongqiao Flower Village, a park run by gardening company Shanghai Aalsmeer Horticulture Co.

Aalsmeer is one among the eight leading flower companies in Chongming providing flowers for the exposition.

In 2014 during a visit to the Netherlands, Chinese first lady Peng Liyuan was invited to christen a new strain of tulip called the Cathay.

"After that, we bought this variety and founded the Cathay Tulip Association," said Zhang Gong, executive director of the association and general manager of Aalsmeer. "We discovered that the tulip actually originated in China. We chose Shanghai to develop the breed because it has such a well-developed flower market." 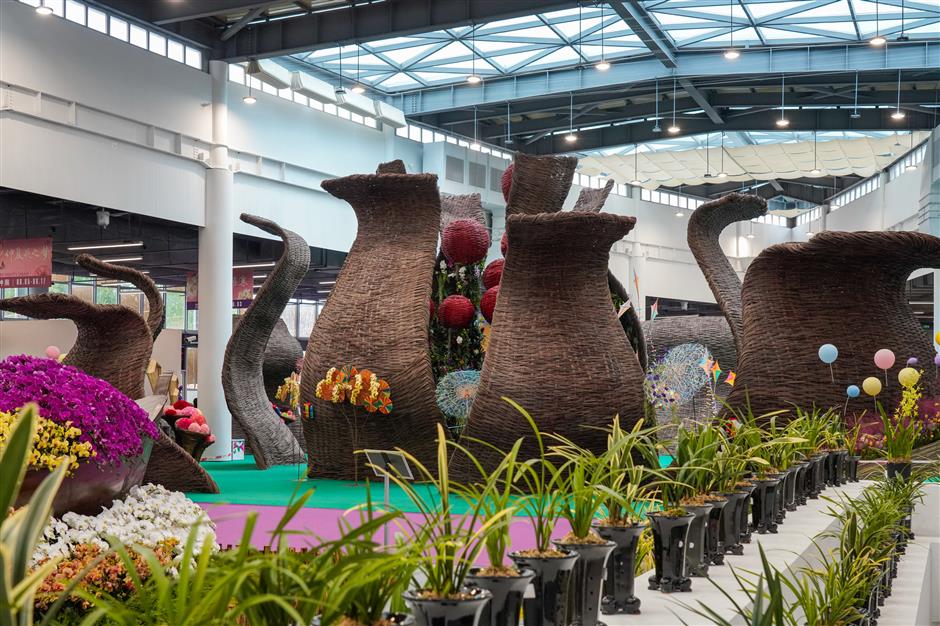 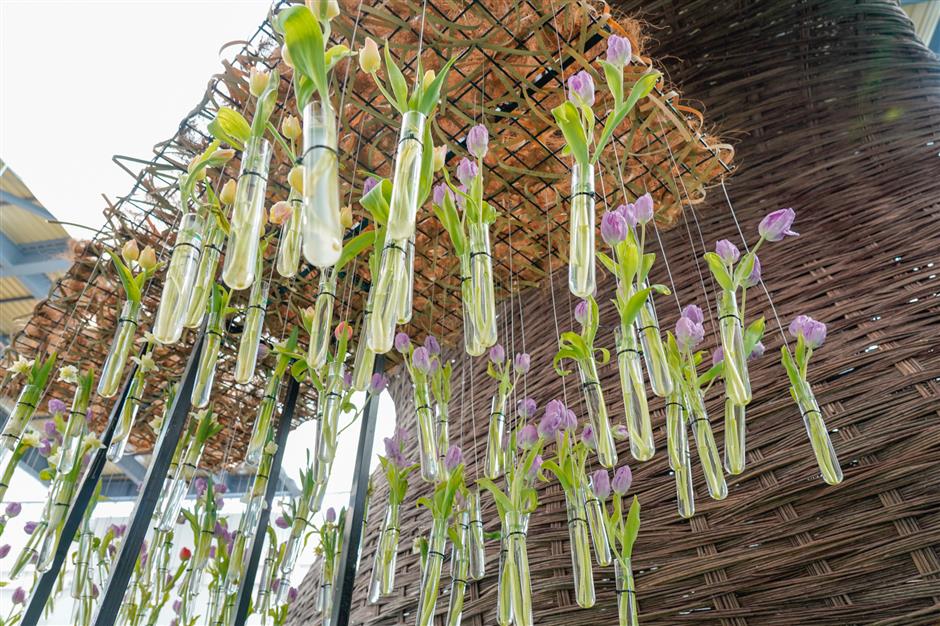 Zhang sees a bright future for tulip cultivation. Hongqiao Flower Village was originally established to serve the exposition, but he is looking beyond that.

"Chongming will be the hub of flower-growing in the Yangtze River Delta," he said. "The island grows narcissus and saffron crocus. We plan to promote these products, along with our tulips, throughout China and to the wider world through the flower expo."

His tulips are on display at the International Business Pavilion and the Huayi Pavilion.

"Expo serves as a platform for industry communication and promotion," Zhang said. "It is attracting people from all over China and raising Chongming's reputation." 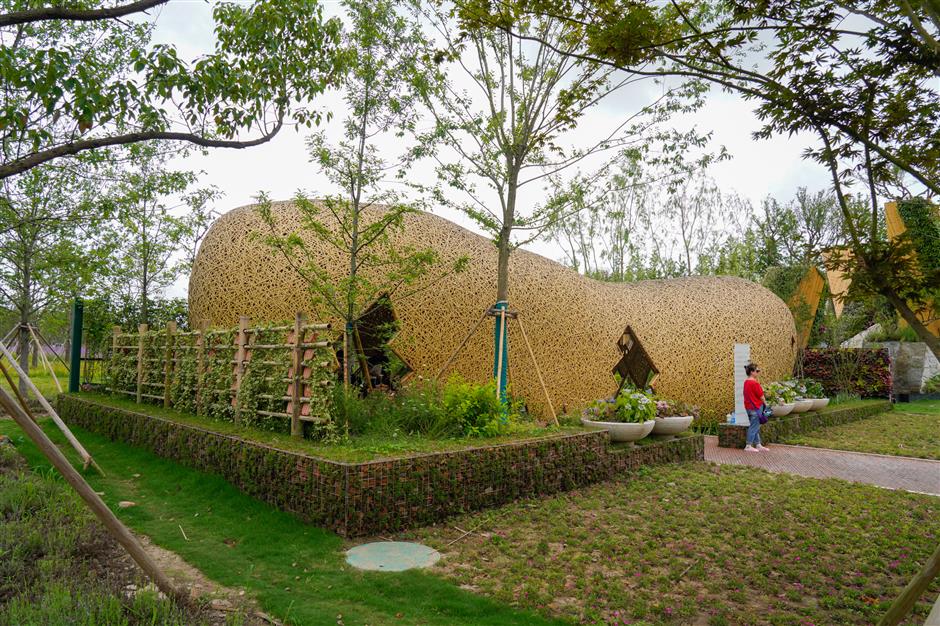 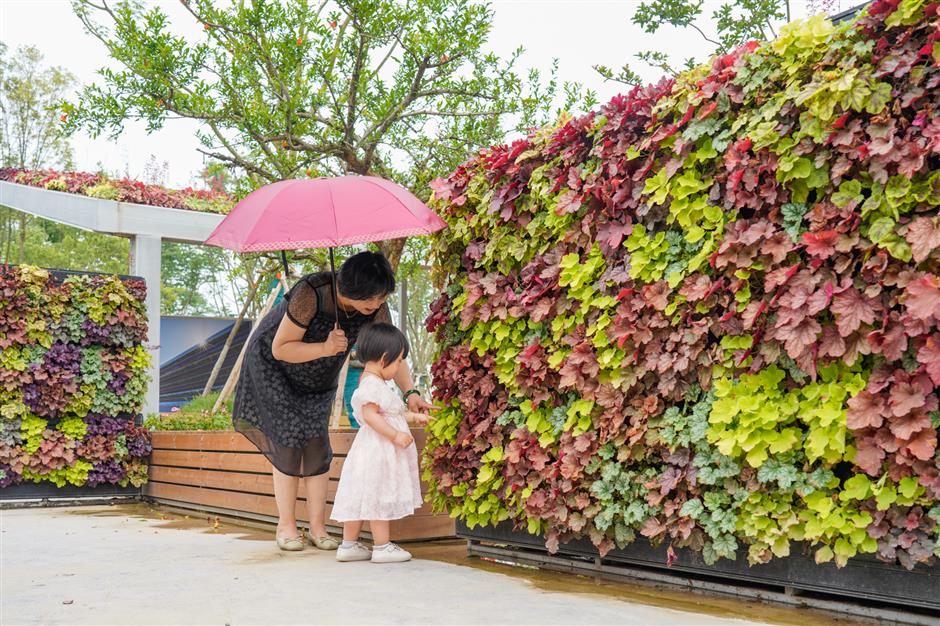 Flower growers from Hong Kong, Macau, Taiwan and foreign countries who couldn't make it to the 10th China Flower Expo because of coronavirus weren't left out of the event.

They were given a hand by an arm of the Shanghai Communist Party of China. The United Front Work Department helped arrange for their displays.

In expo's main staging area, the Fuxing Pavilion, the Taiwan section resembles a valley of flowers and butterflies. The exhibit uses both live plants and advanced technology like large LED screens.

In a "sky lantern" area for visitors, people can use their cellphones to scan a QR code onto a technology device and choose a blessing. A digital sky lantern appears on the screen and soars heavenward.

"When our team designed this section, we considered how to highlight the features of Taiwan for visitors," said Lawrence Lin, who is in charge of the section.

He told Shanghai Daily that by combining real flowers with technology, the exhibition allows visitors to feel reality mingling with the virtual.

"We want to show both the beauty of Taiwan flowers and the development of the island's science and technology," Lin said.