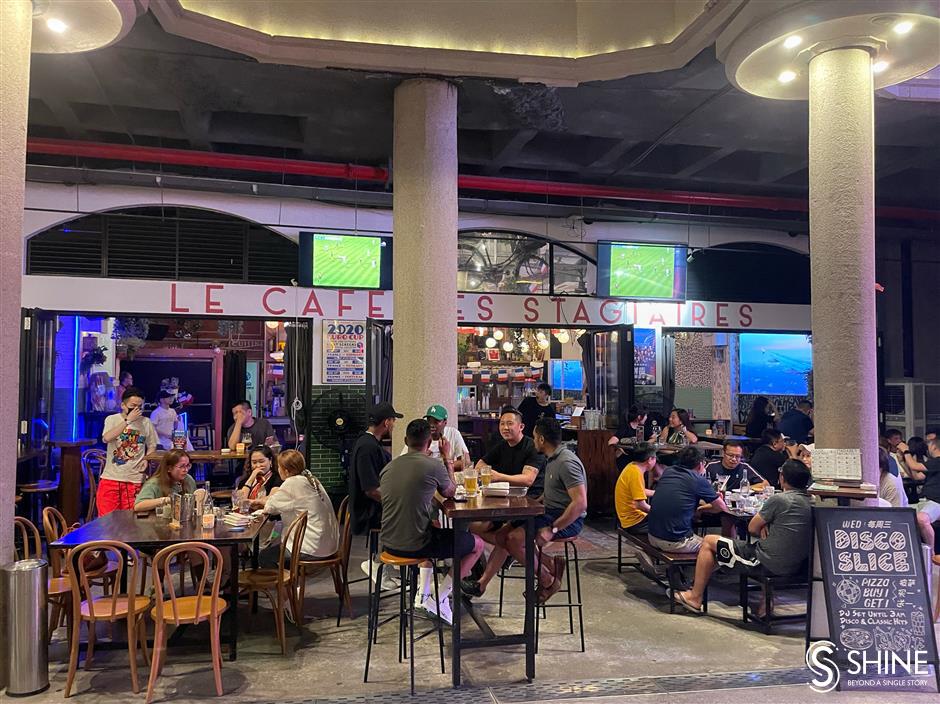 People enjoy a summer night and the fun of football at a bar on Julu Road Wednesday night. 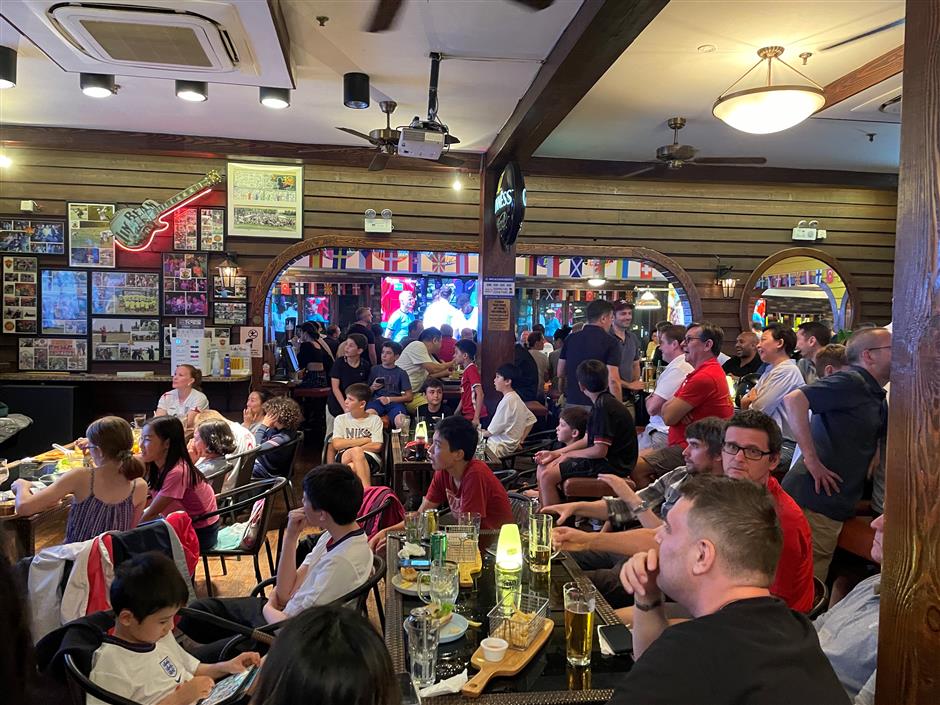 On the midnight of Wednesday, several bars on Julu Road in downtown Jing'an District were packed with people. Some drank and chatted cheerfully, while others were glued to the exciting football match on television accompanied by occasional yelling.

Crowds have come back and football is the only topic with UEFA Euro 2020 taking place from June 11 to July 11.

The occasion was the epitome of Shanghai's pub scene during the European Football Championship, which was postponed for one year due to the pandemic.

Laughter, noise and sweat, the joy of football revived after sports enthusiasm was pent up for what seemed like ages.

The big football event has fueled nighttime consumption and enriched nightlife in the city, with recovery signs for Shanghai's night tourism market as well.

"Several big sports events were postponed due to the COVID-19 pandemic, but now the atmosphere is back," said Peggy Shi, a marketing staffer at Big Bamboo, one of the most popular sports bars in the city with multiple outlets. "The number of customers has doubled since Euro 2020 began, and our bars are often full, with reservations required several days in advance." 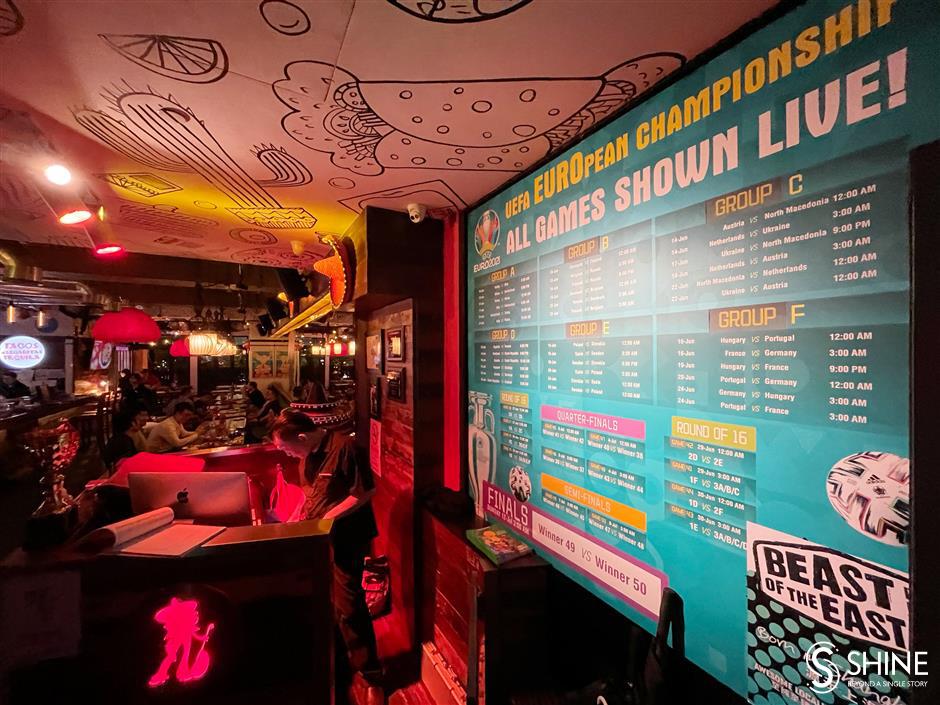 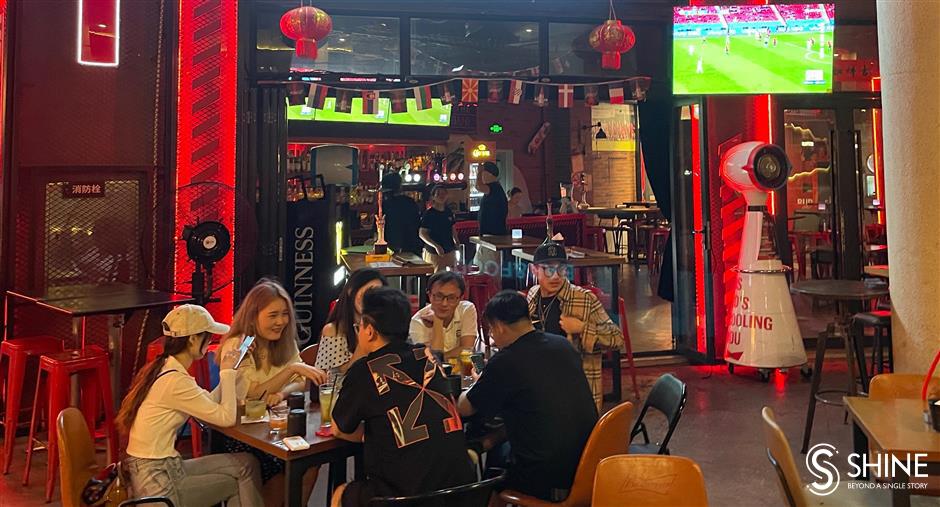 Friends share a laugh on a warm summer night.

"There are even more people during games between countries like France and Germany, which have a large number of fans in the city," Shi added. "We expect the crowds to get even bigger during the elimination stage."

The customers are both Chinese and expats.

"COVID-19 has delivered a heavy blow to the catering and bar industry, but it is recovering gradually," she said. "Summer is traditionally the best time for bars, and big football games further fuel the enthusiasm."

She said the bars are open 24 hours during the football championship instead of closing at midnight or 1am.

"It doesn't matter whether it's a workday or not, only the team of the day matters and people come here in pursuit of a good viewing atmosphere," said Shi.

The bars have been decorated with football elements, and Shi said preparation for the Summer Olympics will begin soon. 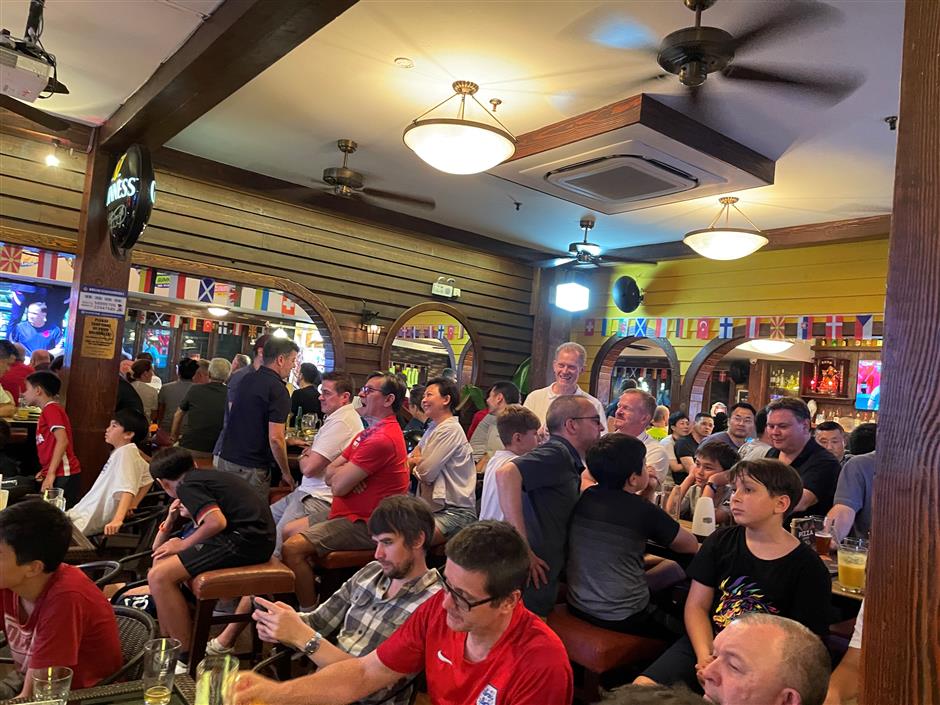 An underground bar called EL SANTO on Julu Road was also packed with customers one hour before a match began between Spain and Slovakia on Wednesday night. Frequented by many foreigners, toasts and cheers reverberated throughout. A small roll-up banner with the match calendar and matchups stands at the entrance, indicating it is a bar catering to football fans.

A beaming young man named Phil, wearing a red Wales T-shirt, was having a drink and chatting with friends. The 24-year-old Welshman has been a regular customer of the bar for a long time, but the buzz during the games is making his visits even more frequent. 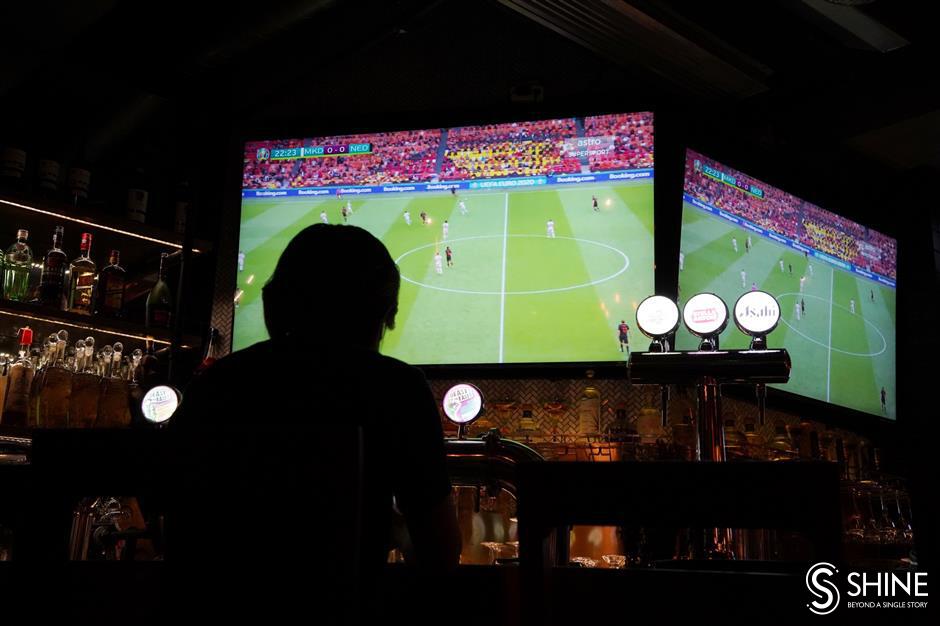 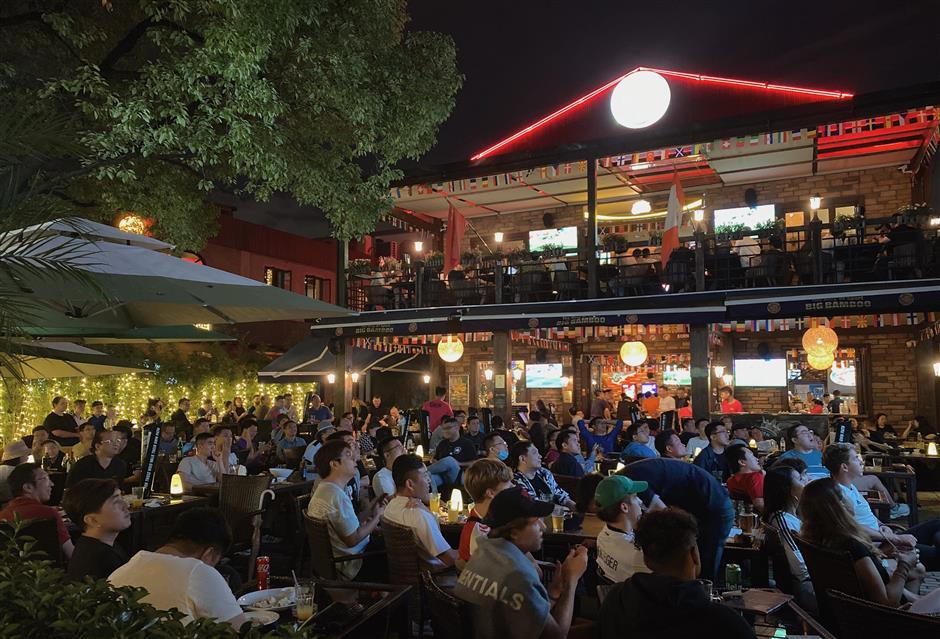 Even during the week, large crowds have descended on bars to watch the Euro Cup.

At Goose Island Brewhouse Shanghai, fans in French jerseys were cheering on their team around a row of round tables.

A barmaid surnamed Wang said with the arrival of the Euro 2020, more people come to the bar every night, and on a big game day the increase in customers is remarkable.

Jack Li, a fan of Germany, said he was excited to come to the bar to watch the game with a crowd after watching football at home for so long due to the pandemic.

"The experience of watching games in the bar is quite awesome, as I can cheer loudly for my beloved team," he said. "The atmosphere makes me happy." 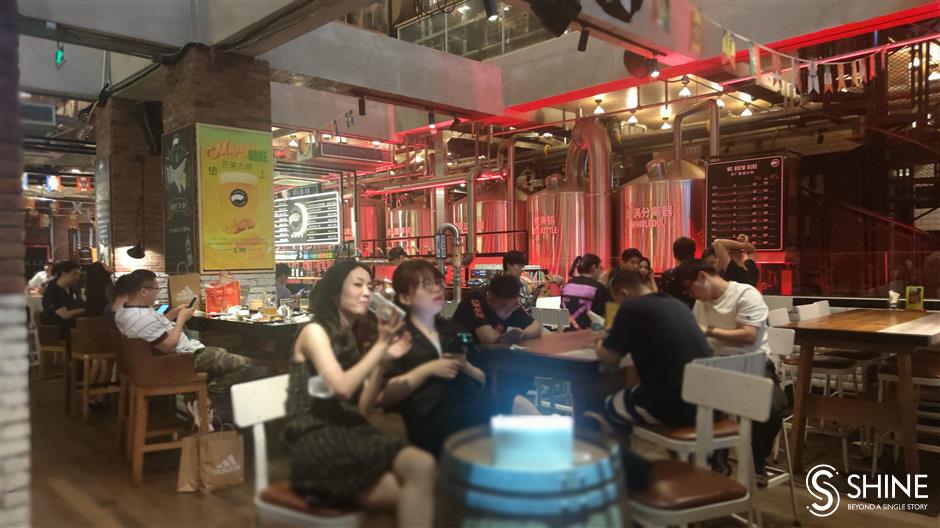 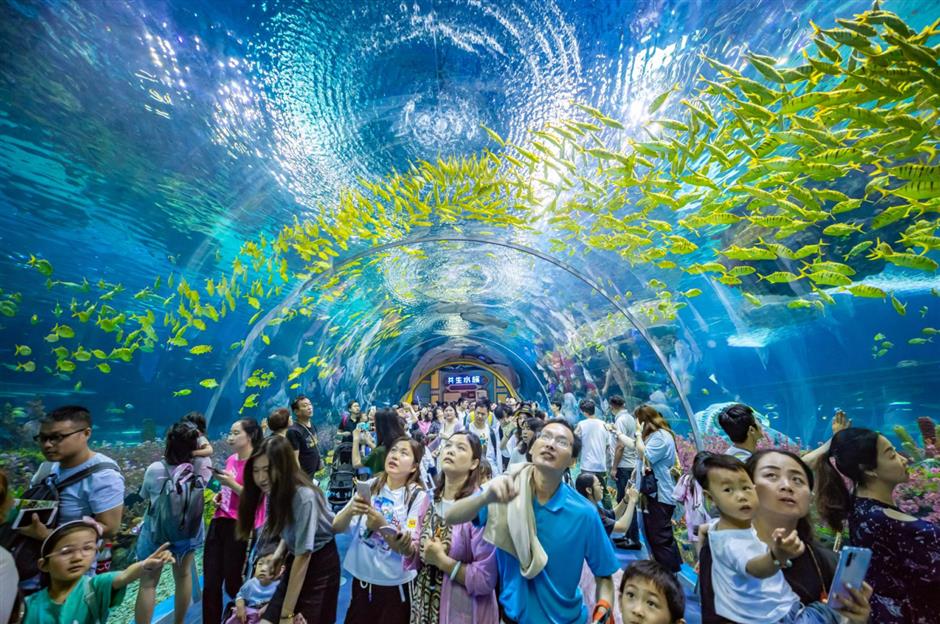 Between June and August, nearly 30 museums citywide are extending their opening hours and hosting various exhibitions and themed activities as part of the "museum magic nights" event.

Night markets and parties will return to the Bund, Sinan Road, the Qibao area and Jinshan City Beach. 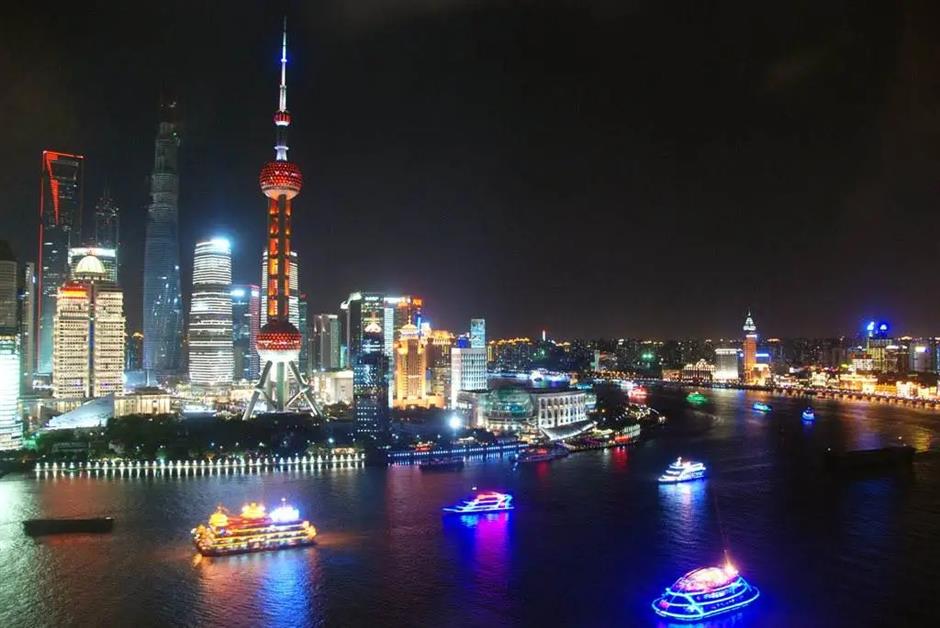 The Huangpu River cruise tour is a popular nighttime activity for local residents and tourists.

"With the pandemic under control, we have seen an increasing number of tourists taking night cruise tours on the Huangpu River and signs of recovery for the tourism market," said Hu Ying, an employee of the Shanghai Huangpu River Cruise Co. "We are offering diversified options to attract more customers, and cruise tours with special Shanghai food are particularly popular with local residents and tourists."

Li Wei, a tourist from Anhui Province, recently took a night stroll with his girlfriend at the Yuyuan Garden scenic area.

"I prefer a night tour due to the cooler weather, and the glittering lights make things more splendid than during the daytime," Li said. "I have visited Shanghai in the past and went to the Nanjing Road Pedestrian Mall, the Bund and Yuyuan Garden during the daytime, but I think the city's night view is much better. Night tours are a must during the summer." 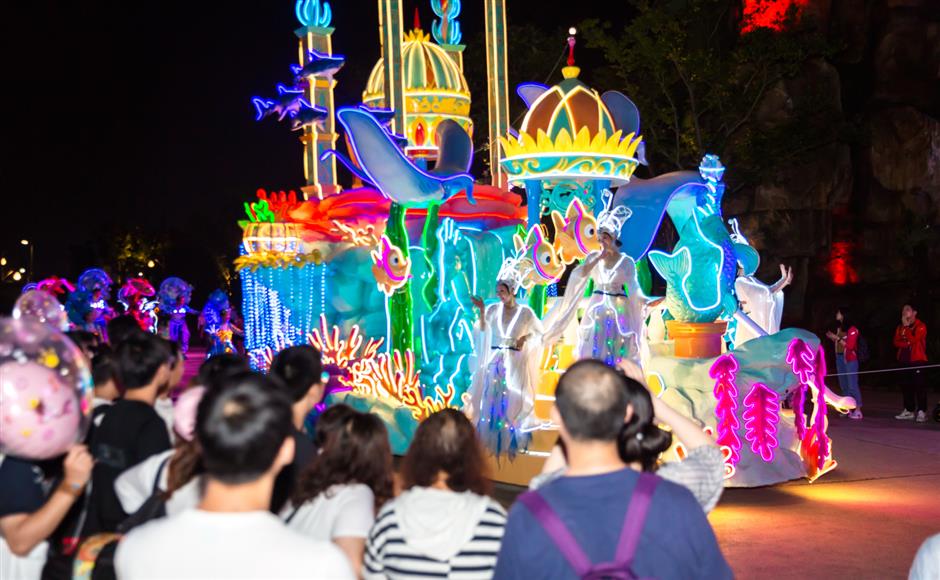 A nighttime performance at Haichang Ocean Park draws a crowd.

Amusement parks in the city have extended opening hours until midnight. 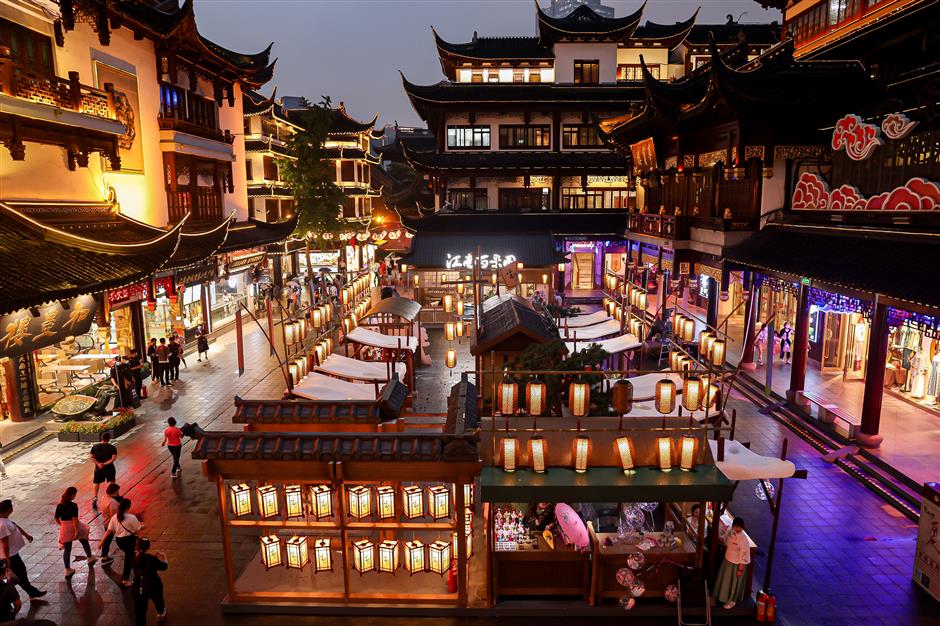 The Yuyuan Garden scenic area is illuminated at night.

At the Playa Maya Water Park, such parties will feature performances and dancing, while at Shanghai Happy Valley, night parties will take place during an electronic music festival between July 10 and September 12, featuring DJ parties, unmanned aerial vehicle light shows and performances. There will also be float parades.

At Shanghai Zoo in Changning District, night tours for families with children exploring the magic animal world in darkness and their nighttime behavior will take place through August.

Shanghai-based online travel operator Lvmama said it booked twice as many night tours during the Dragon Boat Festival holiday this year than last, with night tours at Shanghai Happy Valley, Huangpu River cruise tours and the Zigong Lantern Fair among the most popular. 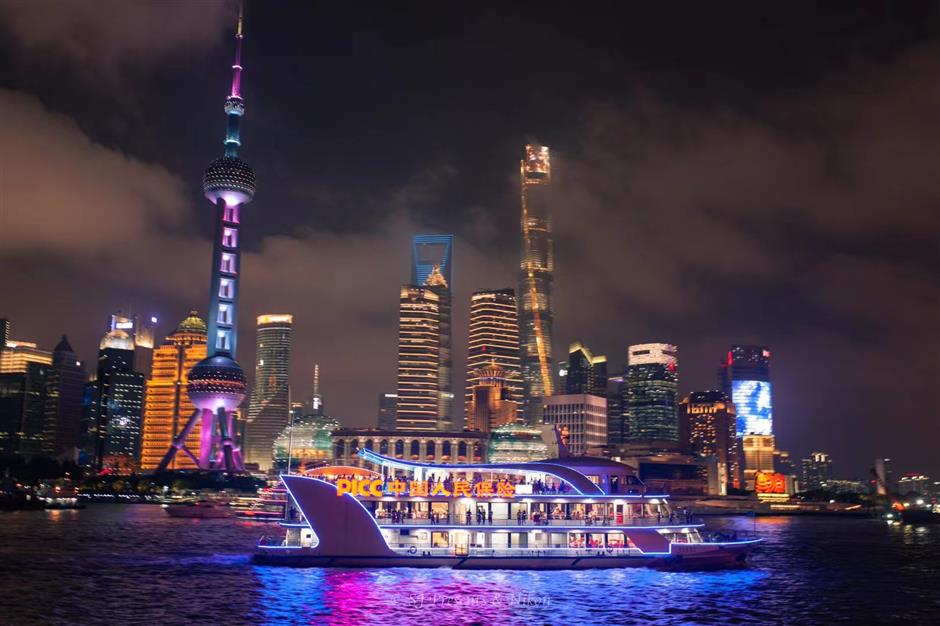 A view of Lujiazui from a nighttime river cruise.