Lu Dajing gestures during an interview talking about his life, his wine career and his winery in the Ningxia Hui Autonomous Region.

For many people, the age of 50 means laying back and waiting for retirement, but for Shanghai native Lu Dajing, it was a starting point to pursue his dream in the remote Ningxia Hui Autonomous Region.

At 50, Lu, now 64, returned to the place where he had worked when he was 17 as a zhiqing, or educated youth, during a national movement calling on educated young people to leave urban areas and support the countryside.

His ambition was to make Ningxia a world-renowned hot bed of Chinese wine, and now he is more than halfway to fulfilling that aspiration.

"If you want to learn about wine, you should watch two movies – 'Sideways' and 'A Walk in the Clouds' – and the Japanese manga series 'Drops of God,'" said Lu, a 30-year member of the Communist Party of China, in a humorous way during a training course presented to staff of Xiangyue Restaurant at the Hyatt Regency's Songjiang branch last week.

Unlike his peers, most of whom are enjoying their retirements, Lu is still flying around China and overseas to promote Ningxia Helanshan wine. He contributed to the brand's cooperation with French alcoholic beverage producer Pernod Ricard.

With the growing fame of Helanshan (Helan Mountain) wine, in 2010, Pernod Ricard, Hennessy and China's Great Wall, Changyu and Dynasty all invested in Helanshan East Valley, which is now called "China's Bordeaux."

It's hard to imagine that when Lu, now a wine expert, went to Ningxia in 2002, he knew nothing about wine. Prior to that, he worked on reorganizing the assets and handled the mess left behind by a scandal-ridden listed company.

At that time, Lu was dispatched to Ningxia for the case and the Helanshan Wine Co, one of the 49 enterprises involved in this case, had a chance to survive with the fixed assets of three large grape plantations. Lu then became general manager of the company to rejuvenate it.

In Ningxia, he met two wine masters, Li Hua and Chen Zeyi, both of whom had confidence in Helanshan's wine. Li is founder of Asia's first enology college, the College of Enology at Northwest A&F University in Shaanxi Province, while Chen is executive director of the wine expert committee under the China National Food Industry Association.

"I found the wine industry has great potential in Helanshan. First, the frost-free season there lasts 176 days, longer than that of Gansu Province and the Xinjiang Uygur Autonomous Region, which completely covers the grapes' growing season," Lu said. "Then, its yearly precipitation is 200 milliliters, while high precipitation like 800 or 1,000 milliliters will easily cause diseases in the grape. Although the 200-milliliter precipitation level is too little for the grape's growth, the Yellow River's irrigation perfectly makes up for it."

"And the last factor is the temperature. The sharp temperature difference between day and night helps with the accumulation of sugar inside the fruit," he added.

To have good soil to grow grapes, Lu insisted on using organic fertilizer to make it purely "green."

"Many of my friends asked me why I gave up the comfortable life in Shanghai and chose to stay in Ningxia with a tough life," Lu told Shanghai Daily. "Yes, I've experienced difficulties and hardships in the two decades in Ningxia. Sometimes there's lack of water, power blackout, and sometimes there's frost or flood. Every natural calamity or man-made misfortune is a challenge for us."

"But I made it because I have a strong belief in producing Chinese homemade wine."

When being asked why becoming a Party member, Lu said he deeply felt the large difference between China's western land and his hometown Shanghai after being a zhiqing in Ningxia. So with the Party education at university, he vowed to be a Party member who would try his best to serve the public. And he did helped lots of people, such as supporting the two children in poor mountainous area to go to college, and contribute to the development of West China.

"Making wine is a long march. It never depends on how advanced your facilities are and how beautiful your winery is, instead it depends on how good your environment and soil are and how much your experiences accumulate," Lu said. "We are just starting."

"Some old foreign wineries boast a history of hundreds of years. They even know which kind of soil is suitable for which breed of grape to grow. So it's not a matter for one generation, but for generations," he added.

The efforts of Lu and other wineries in Ningxia have helped local people better understand wine.

"In the past, Ningxia people didn't know much about wine; they usually drank baijiu, or Chinese white liquor," Lu said. "But now, when they have important events like a wedding, they prepare both the wine and baijiu on the table."

To help poor people in mountainous areas, Lu employs them on his grape plantation and has changed their lives.

Meanwhile, he gave support to two poor Ningxia children and helped them realize the dream of entering university.

Lu's daughter Lu Mengxi has inherited her father's career, and created her own brand – Domaine du 1er Juin – with the wine produced in Ningxia.

The brand is sold in hotels like Hyatt Regency and supermarkets such as Ole and Freshhema. 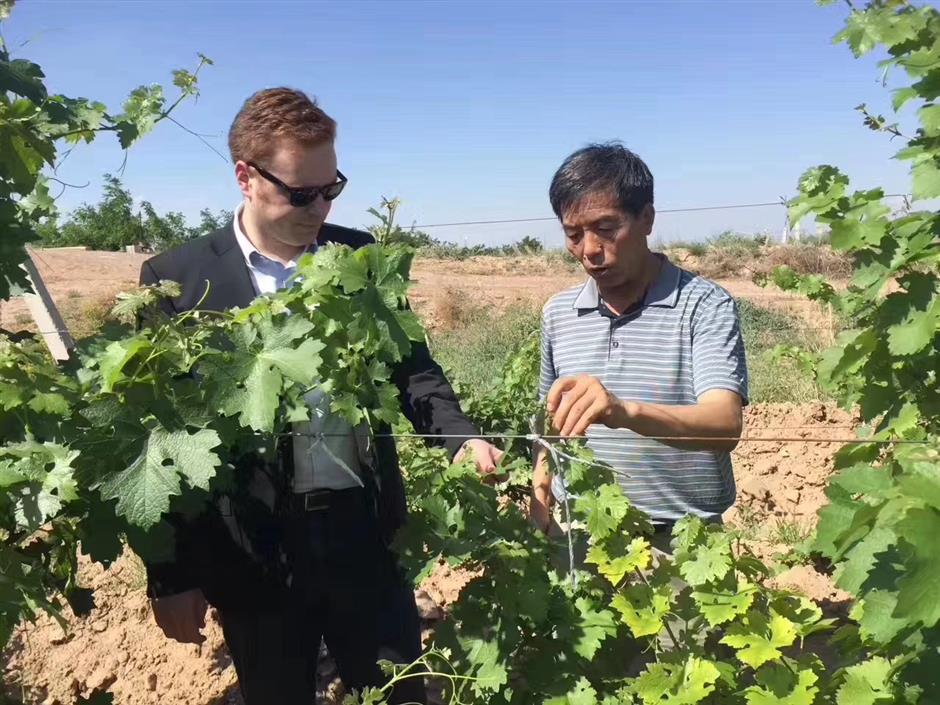