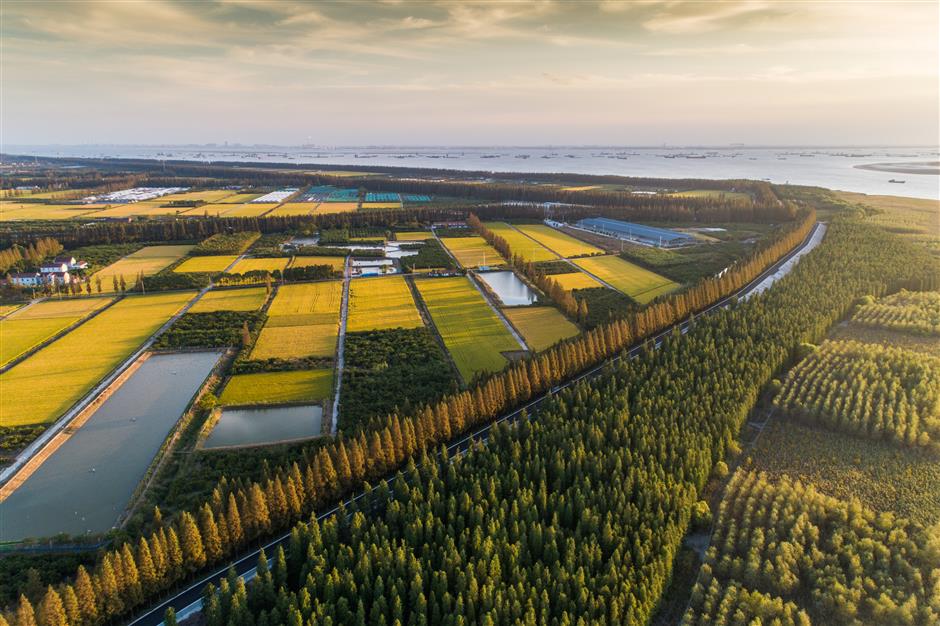 A bird's-eye view of a paddy field in Chongming

Friday is the last day of the 10th China Flower Expo. Over the past 42 days, flowers in full bloom all around Shanghai's Chongming Island have served as an important window to show the achievements of its ecological development.

The flower expo has also been an important opportunity to accelerate the transformation of Chongming.

Ecology is the foundation of Chongming's development, the embodiment of soft power and the key theme behind the expo.

Both the north and south parks of the flower expo were built based on the area's original natural setting without any disturbance.

All facilities and sites in the expo parks are sustainable. The utilization rate of clean energy and water-saving appliances, the collection, treatment and recycling rate of sewage, and the rates of garbage sorting and solid waste treatment all reached 100 percent.

A bench created with 5 million Tetra Pak milk boxes has become an Internet sensation, and the ecological concept behind it has touched visitors.

Building a solid ecological base was the prerequisite for a successful flower expo. Over the years, Chongming has worked hard to improve its ecology. The inferior Class V watercourse in the district has been eliminated, the forest coverage rate exceeds 30 percent, and the air quality is excellent almost all the time, all of which rank the top of all city districts.

In 2001, Shanghai proposed the concept of a Chongming ecological island. Chongming adhered to the original aspiration, and rolled out four rounds of three-year action plans for the construction of the ecological island, arranging 255 projects that involved six aspects – space control, ecological governance, infrastructure, ecological industry, social and civilian life and coordinated development.

With the improvement of its ecology and increased efforts to protect wildlife, many rare birds seen long ago on the island have returned.

Chongming has 14 species of waterfowl, accounting for more than 1 percent of the global population. Dongtan wetland has become a paradise for birds. At the same time, Chongming is implementing a "10-year fishing ban" on the Yangtze River, and mobilized people to get involved.

The district also strives to make breakthroughs in the integration of ecology, production and life, hit CO2 peak emissions before 2030 and achieve carbon neutrality by 2060. It is also working to create a green environment, green energy, green transportation, green production and green life to make Chongming an example of "lucid water and lush mountains." 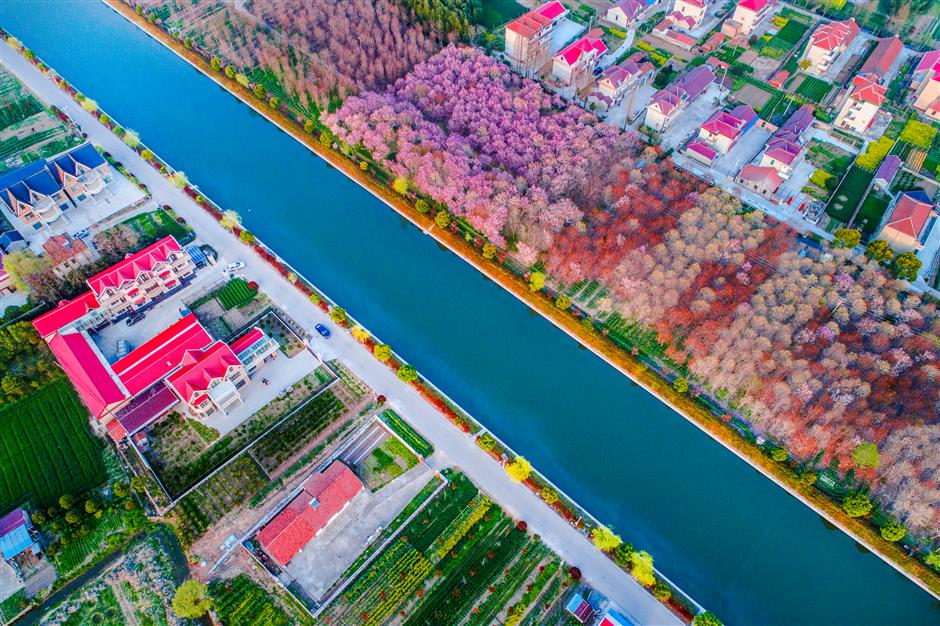 It is not only the main task to promote high-quality development, but also an important path to build new advantages for development to extend the flower industry chain.

By the end of last year, the total flower-planting area for commercial use in the district was nearly 1,900 hectares and annual sales exceeded 100 million yuan.

Chongming also relies on advanced technology and ideas brought by these flower enterprises to build itself into a research and development base of characteristic flower provenance, a promotion base of new varieties and new technologies of flowers for commercial use, and a breeding base of fine varieties of flowers.

By 2025, Chongming's flower trade volume will make a major breakthrough, the entire industry chain development system will be fundamentally established, and an international flower industry high ground will be built.

This year's flower expo has promoted the comprehensive upgrading and development of Chongming's infrastructure, beautiful countryside, tourism services and flower industry. In the next stage, Chongming will turn the momentum into development potential.

The expo is a beautiful, happy ecological dream for everyone in Chongming, and the "post flower expo opportunity" with greater imagination space is the foreshadowing of future development.

Chongming will adhere to the close integration of magnifying the flower expo effect with great changes in the 14th Five-Year Plan period (2021-2025) and building a new Chongming.

The future Chongming will promote the ecological development of the flower industry, promote rural revitalization in a comprehensive way with beautiful flowers, meet people's expectations for a better life, build a "flower island on the sea" and strive to build a flower expo that will never end. 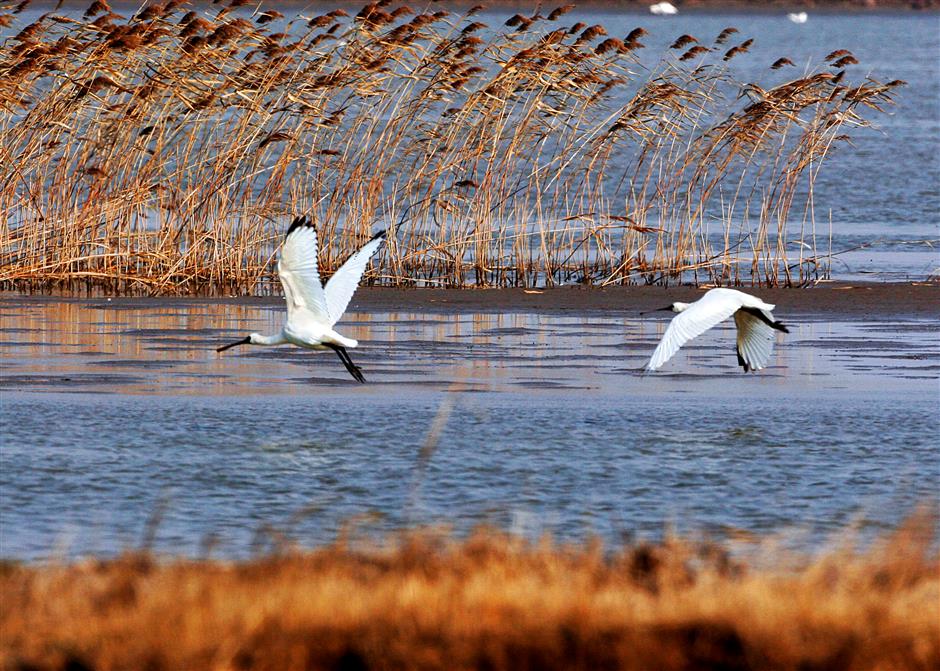 Black-faced Spoonbill in a Dongtan wetland 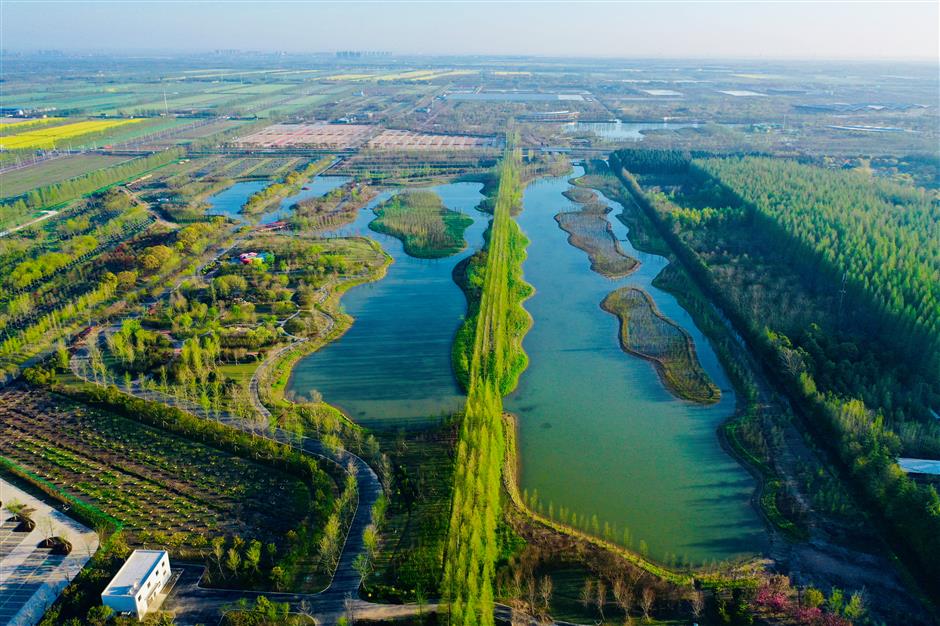 An aerial view of the Plum Blossom Garden