What's in a classic guqin melody created centuries ago besides its archaic rhythms that still reverberate today?

To this question, "a soothing effect" would be the answer of most people I know who have at least some exposure to guqin music. But suppose you further ask: "Many other kinds of music also have a similar effect, so what's unique about guqin (China's oldest plucked instrument with seven long strings)?" Then many would probably scramble for an answer.

Ni Ni, a young lady who lives in Shanghai's Pudong New Area, is the latest example. She came to learn guqin with my wife last Tuesday.

"How does the idea of learning guqin ever occur to you?" my wife asked her as they met for the first time.

"My doctor has 'prescribed' light music as a cure to my chronic fatigue," she said. "My heart beats too fast – sometimes more than 100 times a minute. But a recent complex physical check simply found no functional problem with my heart. "

She attributed her anxiety to a heavy workload she used to have. She often had to work more than 10 hours a day at the human resources department of a private firm. She even had to continue her work while seeing a doctor. In addition to an unusual escalation of heartbeat, she sometimes suffers from a sleep disorder as well. Now she has temporarily left her job.

"So you hope to calm down with the help of soothing guqin music, right?" I chipped in.

"But why guqin and not piano or guitar?" I asked. "They all can calm one's mind, can't they?"

"I have no idea yet," she said shyly. "My doctor didn't say which instrument I should pick. I just fell for guqin intuitively."

"Let me tell you why," I offered to explain. "A secret that sets guqin apart from guitar and piano and many other Western musical instruments lies in traditional Chinese medical wisdom that finds a positive correlation between five tones – gong, shang, jue, zhi and yu – and the meridian energies of five major human organs – spleen, lungs, liver, heart and kidney. For example, gong reinforces the spleen energy, while zhi goes a long way toward supporting the power of the heart.

"A classic guqin piece revolves around these five tones that not only sound pleasing to the ear but also keep the inner energy flow of corresponding human organs in a healthy balance," I continued. "A guqin music composer usually minimizes the use of semitones that tend to convey a melancholy mood." 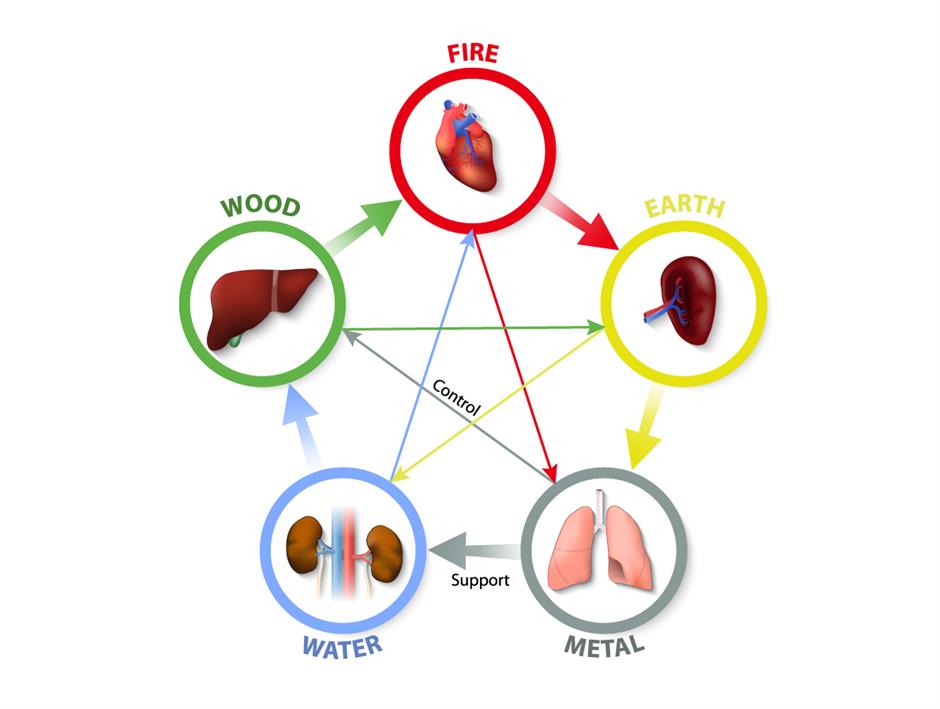 This medical theory behind guqin music conforms to China's ancient philosophy that regards the universe – and everything in it – as a mixture of five major elements: wood, fire, earth, metal and water. The "Yellow Emperor's Inner Canon," China's earliest-known medical science book, says categorically that man has five major organs while the heaven has five tones – all corresponding to the five elements. For instance, gong and the spleen both belong to the earth element, so the sound of gong naturally supports the energy of the spleen meridian, which traditional Chinese medicine defines as the seat of thoughts.

Elaborating on the healing effects of five tones, Si Maqian (139-86 BC), a great historian, writes: "The tone of gong helps one foster a mild and expansive attitude ... the tone of jue helps one cultivate an emphatic and benevolent heart ..."

"In your case, you should play or listen to melodies composed chiefly with the zhi element," I said.

I didn't know much about this healing power of five tones either, until I learned it from medical scientists in my latest interviews and research about how best to treat fatigue and insomnia that have affected the lives of hundreds of millions of people around the world.

Modern science has proved that music does affect both the spiritual and physical health of a person, hence the rise of music therapy and mindfulness training in the West. They are drug-free methods designed to help people overcome fatigue and sleep better without having to take sleeping pills, whose long-term effects remain in doubt but side effects are evident.

"Approximately one out of every nine people you pass on the street will meet the strict clinical criteria for insomnia, which translates to more than 40 million Americans struggling to make it through their waking days due to wide-eyed nights," observes Matthew Walker, a professor of neuroscience and the director of the Center for Human Sleep Science at the University of California at Berkeley, in his latest book "Why We Sleep: Unlocking the Power of Sleep and Dreams."

Sleeping pills, which millions of Americans swallow in their daily lives, "do not provide natural sleep, can damage health and increase the risk of life-threatening diseases," warns Walker. He suggests cognitive behavioral therapies that improve one's sleeping habits, and hygiene should become a first-line treatment for insomnia patients.

Doctor Du Yijie (left) plays guzheng, a 21-string Chinese musical instrument, in a performance with her patients. She uses traditional music to help her patients deal with fatigue and insomnia.

Du Yijie, a senior physician with a PhD degree in clinical medicine, has been trying to combine the best of Western and Chinese therapeutic practices over the past decade to help patients sleep better. She first studied with Harvard University professor Jon Kabat-Zinn, who invented mindfulness-based stress reduction, a popular non-pharmacological method to help people reduce stress. Later, under the guidance of professor Dong Jingcheng, a TCM master at Huashan Hospital who's also versed in Western medicine, she helped launch a convalescence program called "The Relative Time Space of Chronic Diseases" to help patients recover from cancer and insomnia by reducing their stress.

"When I first introduced professor Kabat-Zinn's original mindfulness program to China, I found many Chinese participants could not calm down quickly," Du said in an interview with Shanghai Daily. "Cultural differences were a possible reason, as many Chinese patients might not fully understand the translated versions of guided meditation scripts. Quite a few joked that I looked like a 'philosopher' (rather than a physician)."

"So I decided to reform the mindfulness method to make it more suitable for the soil of Chinese culture," she said. "To my knowledge, guqin music is more ethereal and soothing than that of piano or a Western stringed instrument. As such, it can be better background music for mindfulness training, and so is the case with guzheng and xiao, both of which also focus on the five tones."

Guzheng is an ancient 21-string musical instrument, while xiao is a vertical bamboo flute whose history dates back thousands of years. Doctor Du plays guzheng well.

"I've been treating my patients by playing guzheng all the time, so as to prove that TCM's five-tone healing therapy works," she said. 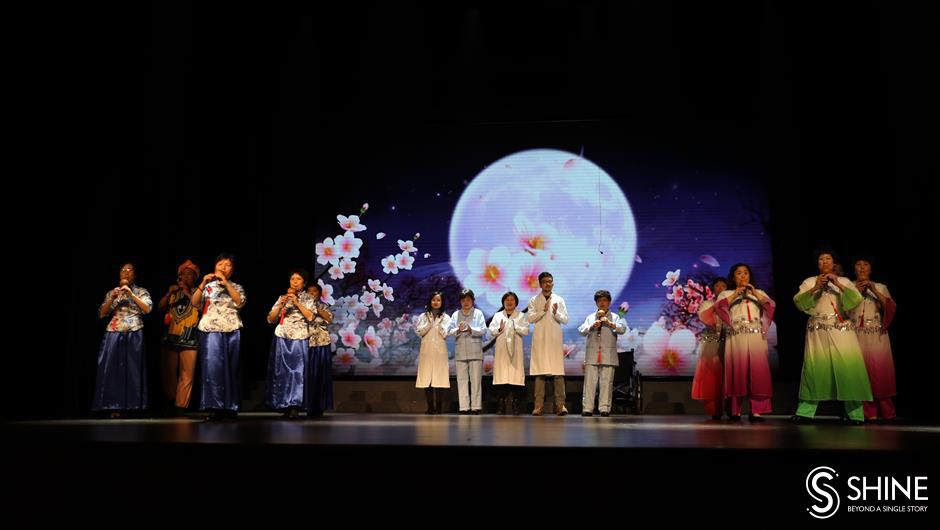 Doctors lead their patients in a musical performance that helps reduce stress.

According to well-controlled medical experiments by the program, all four methods have effectively reduced patients' level of worry, as evidenced by improved HAMA and HAMD results. HAMA stands for Hamilton Anxiety Scale and HAMD stands for Hamilton Depression Scale. Both are well-established measures in modern medical and psychological sciences.

In terms of reducing physical and nervous fatigue, however, music therapy has done better than the other three methods. And the music therapy was mainly developed by Dr Du, who has explored and enriched the ancient TCM five-tone healing theory.

Liu Huan, a PhD scholar in music psychology, cites the "Yellow Emperor's Inner Canon" as saying that the greatest doctor lends his or her ear to the tones of the voice of a patient, because the tones invariably betray the health status of one's inner energy. In research supported by the Ministry of Education, she has found that the repeated utterance of one of the five tones does serve to improve the health of a corresponding human organ and its related meridian. 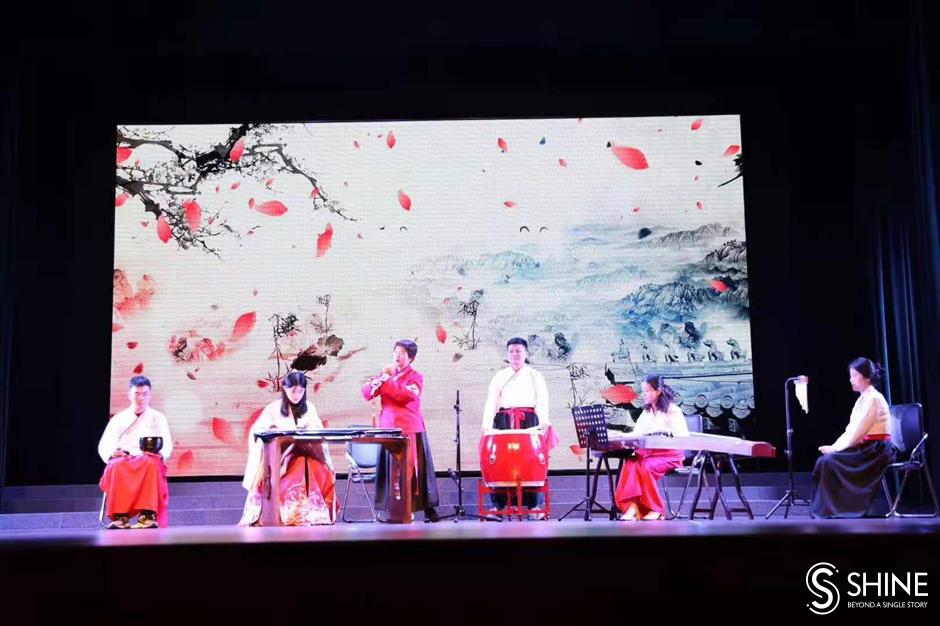 The woman blowing a hulusi was diagnosed with advanced ovarian cancer many years ago. At the beginning, she was so worried that she could not sleep. Now, thanks to traditional Chinese music therapy, she no longer worries and sleeps better now.

A middle-aged woman was diagnosed with advanced ovarian cancer many years ago.

"At the beginning, she wept day and night. She was so worried that she could not sleep well," Du said. "Then we treated her with five-tone music, and we even taught her to blow hulusi, or gourd flute, a kind of free-reed wind instrument. Now she no long worries. She smiles every day and calmly goes to sleep."

This healthier mood has in turn improved her overall health.

No wonder a senior Shanghai official said after a visit to team members of the program: "They (the patients) are immersed from head to toe in a halo – not that bright but warm. Their calmness shows that falling ill is no longer like falling into an abyss. They show that life can be so beautifully lived."

The magic power of light music, particularly the five tones that "talk" directly to our inner energy, testifies to the time-honored medical wisdom that mind management matters – both for the mind's own sake and the health of the body.

"A great doctor seeks to cure the mind of a patient as well as his or her physical illness," said Zhang Wenjing, a senior doctor who specializes in insomnia treatment at the Shanghai Hospital of Traditional Chinese Medicine.

Music is just one way to cure the mind. A friendly talk with a patient is another.

Doctor Zhang once received a patient in her 30s, who suffered from chronic insomnia due to stress that stemmed from a bad relationship with her husband.

"While prescribing herbal medicines, I also had a friendly talk with her about the importance of family value, hoping that she could have a candid conversation with her husband," Zhang recalled. "She did as I proposed. As a result, she recovered quickly."

Both Zhang's and Du's stories reflect TCM's holistic way of treatment. Chronic diseases like insomnia are a case in point. The two doctors don't prescribe sleeping pills for a "quick effect." They go into the heart of patients and the "heart" of their illness.

Now, Dr Du has carried her cause one step further – she has become director of a center for sleep science at the Qingpu Hospital of Traditional Chinese Medicine that opened last month.

"So many patients with insomnia came to us (as we just opened our clinic)," Du recalled.

One patient so "enjoyed" Du's five-tone music that he slept past the clinic's closing hour.

A recent national survey of sleep quality in China shows more than 300 million Chinese adults suffer from chronic insomnia, mainly due to emotional concerns or distress. The Paper reported that sleeping pills are still a first choice for many patients.

At a time when scientists are sounding an ever louder alarm on the side effects of sleeping pills, TCM, with its holistic view about health or lack of it, stands to offer a fundamental cure, not just a "quick" solution that doesn't last long.

What five organs mean in TCM

In TCM, the concepts of liver, heart, lungs, spleen and kidney have a broader meaning than modern anatomy indicates. They are not exactly the five organs as defined by modern medicine. They actually refer to five major meridian energies.

As such, the liver is part of a meridian system easily affected by excess emotions. Similarly, when we talk about kidney in TCM, we usually refer to kidney energy, which relates to one's courage.