Day by day, Shanghai streets and public spaces getting greener 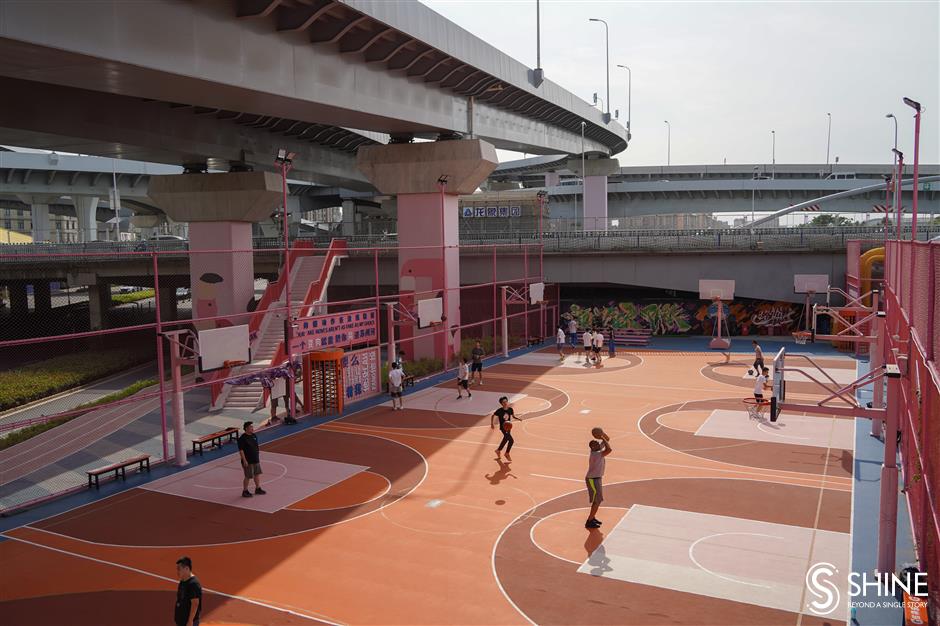 Action on the basketball court under the Middle Ring Road in Changning District. 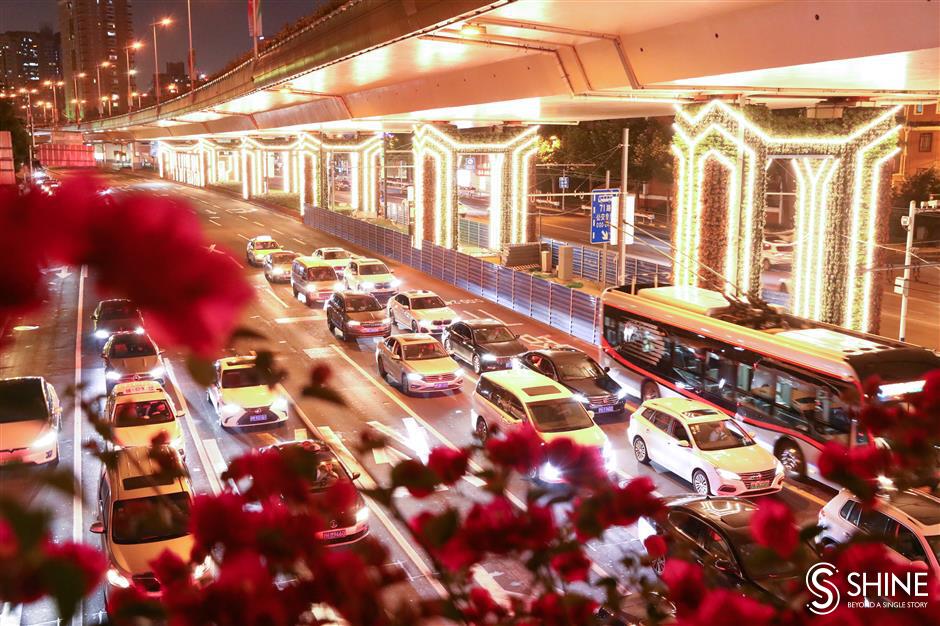 The view of Yan'an Elevated Road at illuminated night.

The environs of the city of Shanghai were often called a concrete jungle, but now they are being turned into an "ecological city" with changes becoming more apparent day by day.

Some "gray" spaces have been redesigned and upgraded to be more desirable, catering to the diversified leisure pursuits of residents and reflecting the city's "soft power."

A public area of ​about 3,700 square meters along Suzhou Creek and under the Middle Ring Road in Changning District has become a new paradise for sports lovers since it opened to the public early this year.

With its design featuring elements of the pink flamingo, it includes a basketball court, a gymnasium, jogging tracks, sightseeing platforms and greenery landscapes.

"I like playing basketball and it is an ideal place with good ventilation and a unique design," said Zhang Yong, a resident living nearby.

"It used to be a cold concrete structure, but look at it now. It has taken on a brand-new look," he said.

"The basketball court is self-service and I pay by scanning a QR code, which is convenient," said Zhang. "Moreover, the price of 12 yuan (US$1.85) per person, per hour is very affordable." 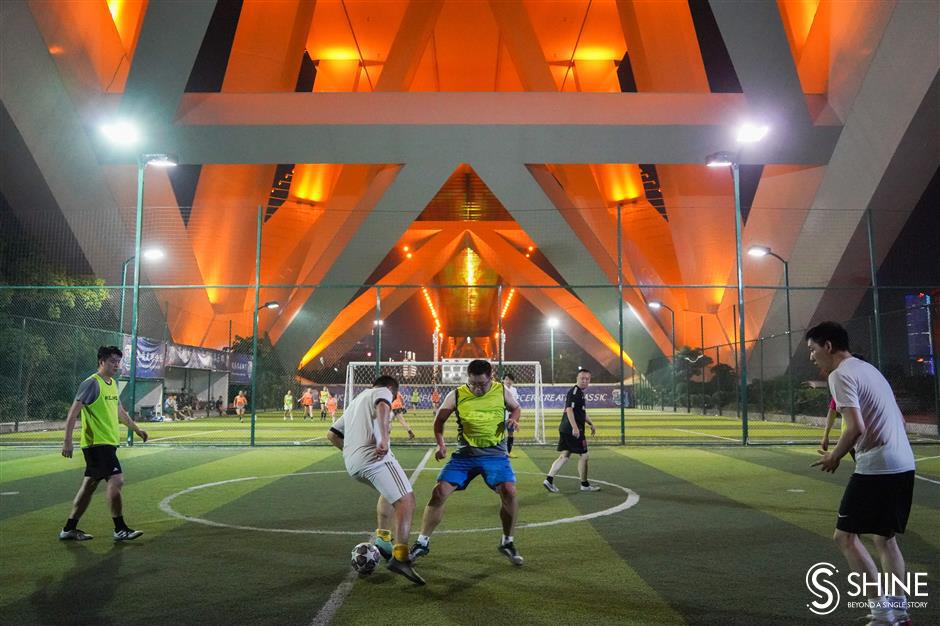 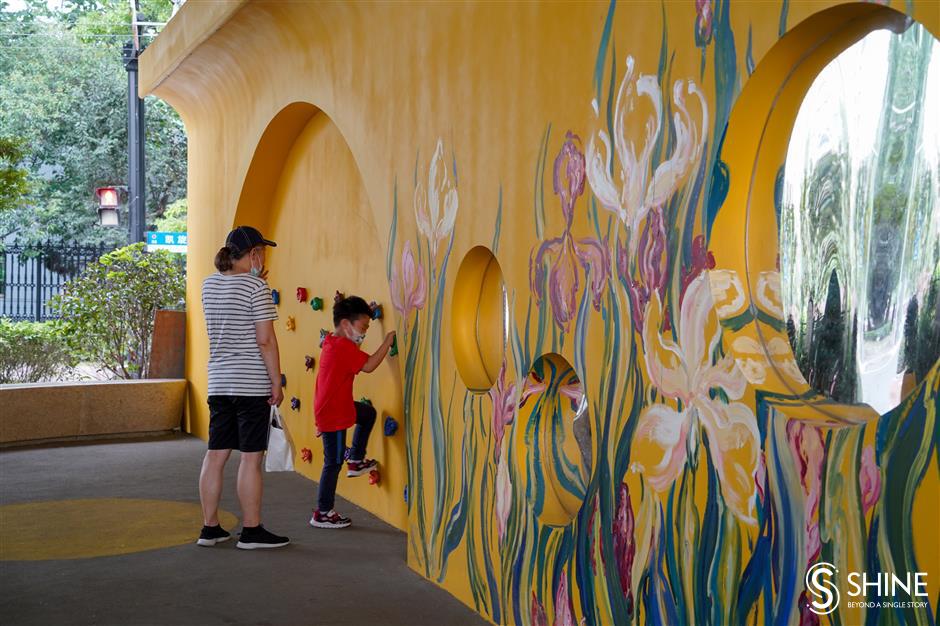 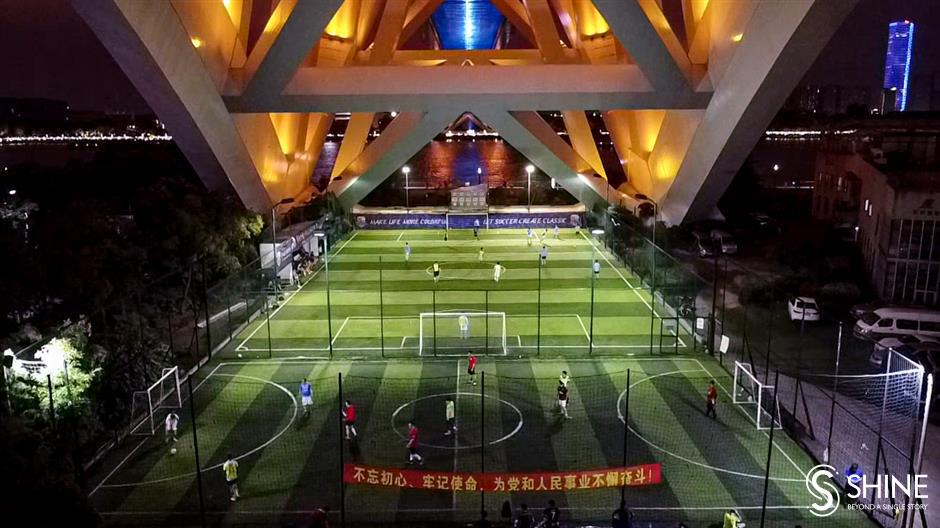 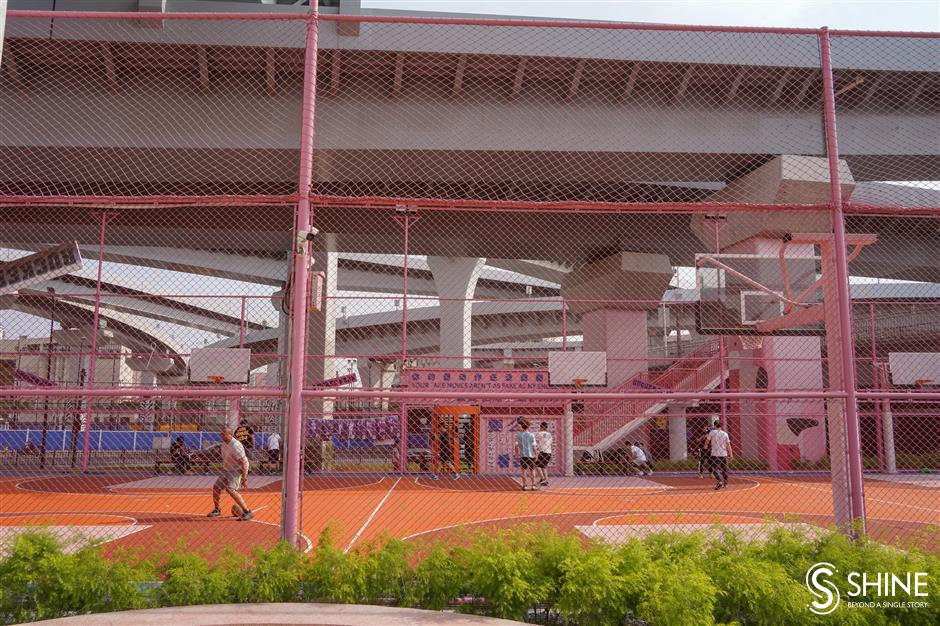 People play basketball on a court under the Middle Ring Road in Changning District.

Another two spaces under the bridge have also partially opened to the public.

One design was inspired by the yellow cheetah and covers more than 10,000 square meters. It boasts two basketball courts, a soccer field of 800 square meters, walking tracks, a park, and a sports service center.

Riverside benches are ideal for visitors wanting to take a rest or to simply sit and appreciate the surroundings.

Another "zebra" space with black-and-white stripes has a soccer field covering 2,900 square meters, a park, a roller-skating area, and a parking lot.

Greenery landscapes also have been created recently under overpasses in Huangpu District.

Among them, an art landscape under Yan'an Elevated Road, and close to the intersection of Beijing Road W., features blooming flowers, musical instruments and staves made of steel, together composing an urban green symphony.

The choice of plants used under the elevated roads depended on a number of factors such as sunshine, soil conditions, exhaust gas, dust and maintenance management, officials said. 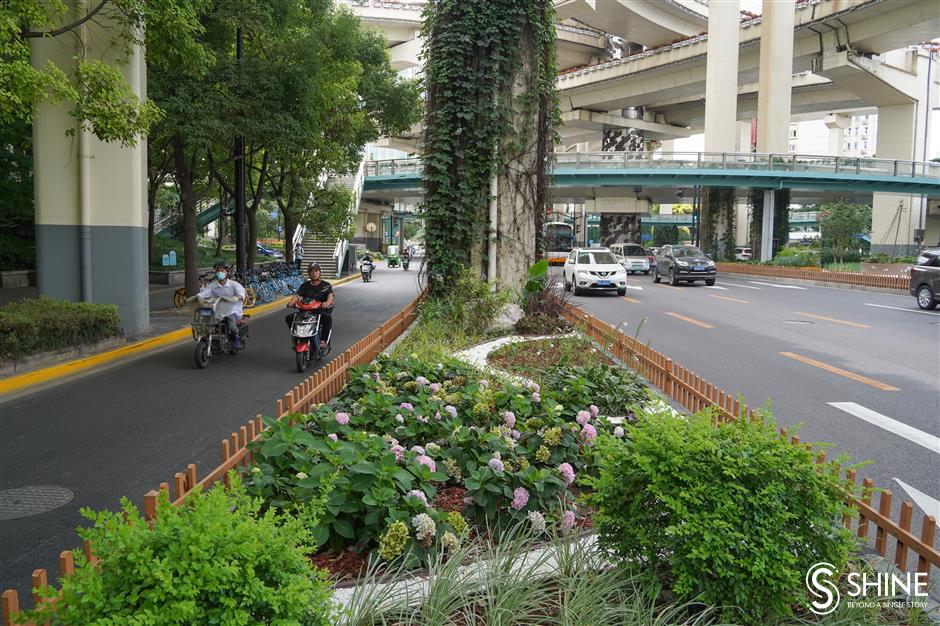 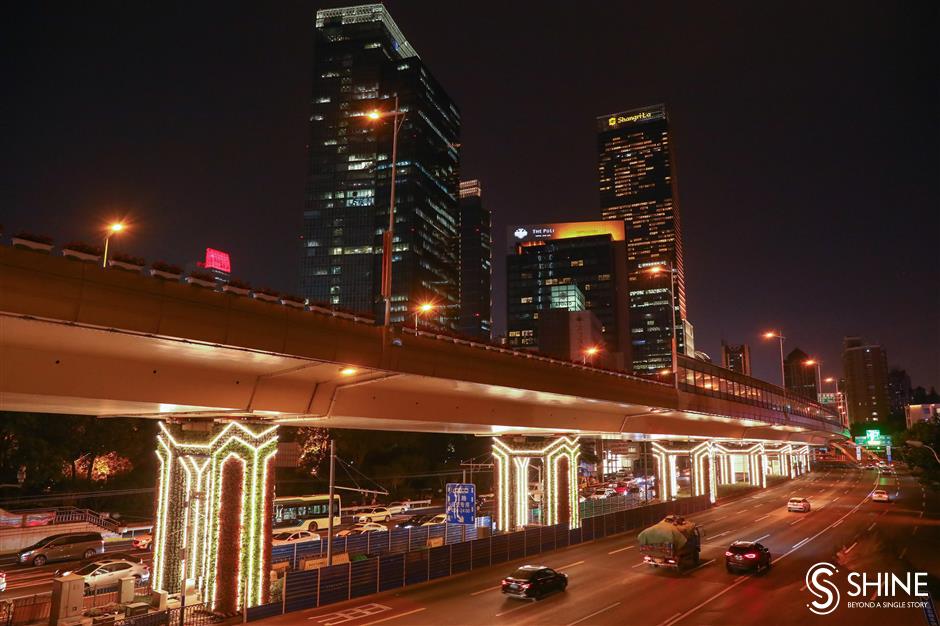 As a result, small and medium-sized bushes and acer palmatum and sweet-scented osmanthus have been used.

"They offer pleasant green landscape views when I drive by, instead of the gray and dusty environment in the past," said Liu Yang, a local resident.

"It is a small thing, but such views lift my mood because green is a symbol of vitality and life," he added.

In addition, vacant spaces such as unused parking lots under elevated roads have been turned into green areas, presenting a more enchanting landscape.

Transformer substations under the South-North Elevated Road have been beautified by vine plants, making them part of the scenery.

In Jing'an District, greenery has been the supports used to beautify Huashan and Changde roads and top areas of Yan'an Elevated Road. Patterns of historic shikumen, or stone-gate house, ships and magnolias in full bloom signify the city's revolutionary history and green life.

About 60,000 colorful plants with long endurance, such as ivy and privet, cover an area of ​​1,200 square meters and ensure a four-season landscape, said the Shanghai Greenery and Public Sanitation Bureau. 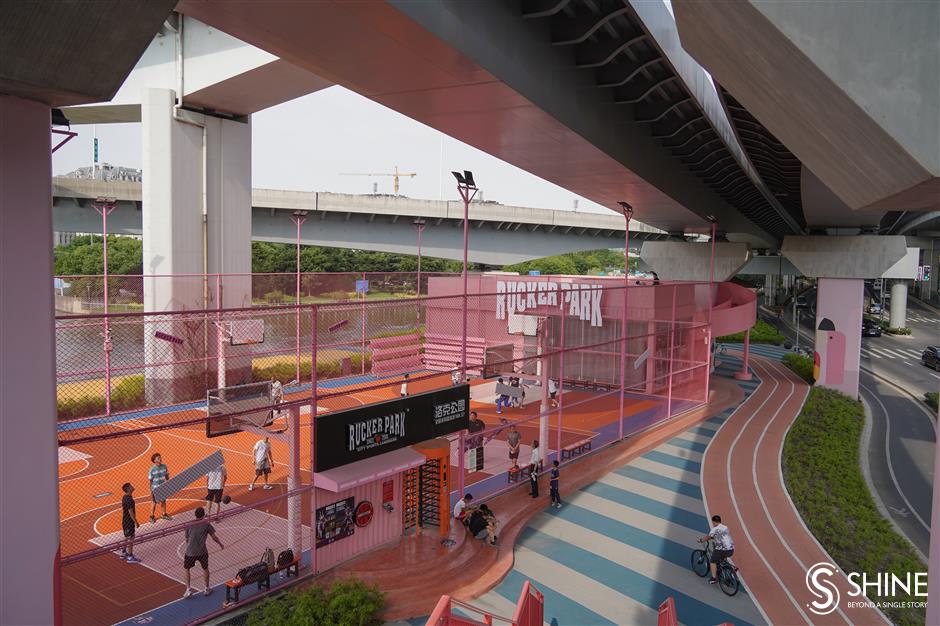 People play basketball on a court alongside jogging tracks under the Middle Ring Road in Changning District. 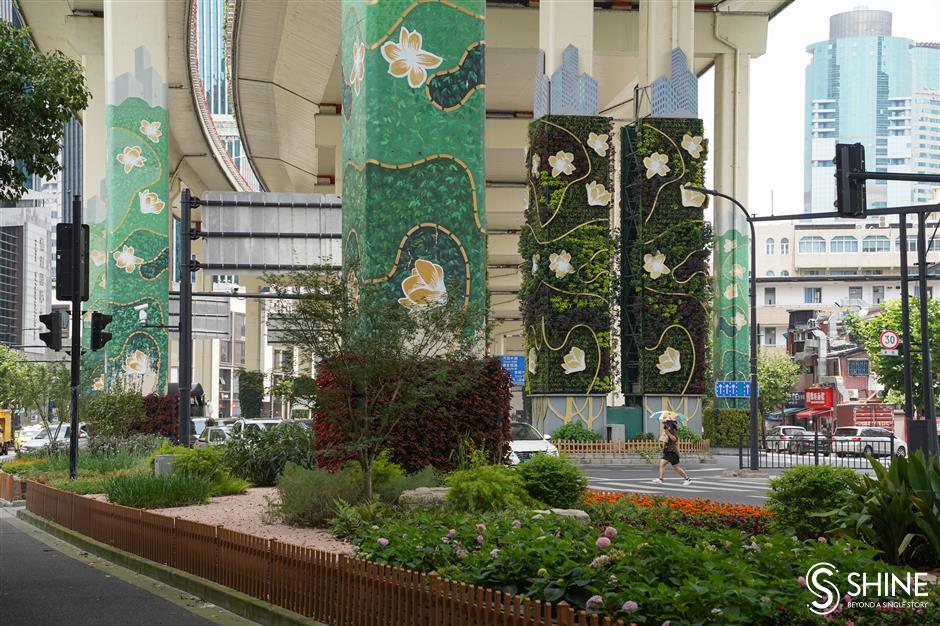 A section of greenery landscape under the South-North Elevated Road. 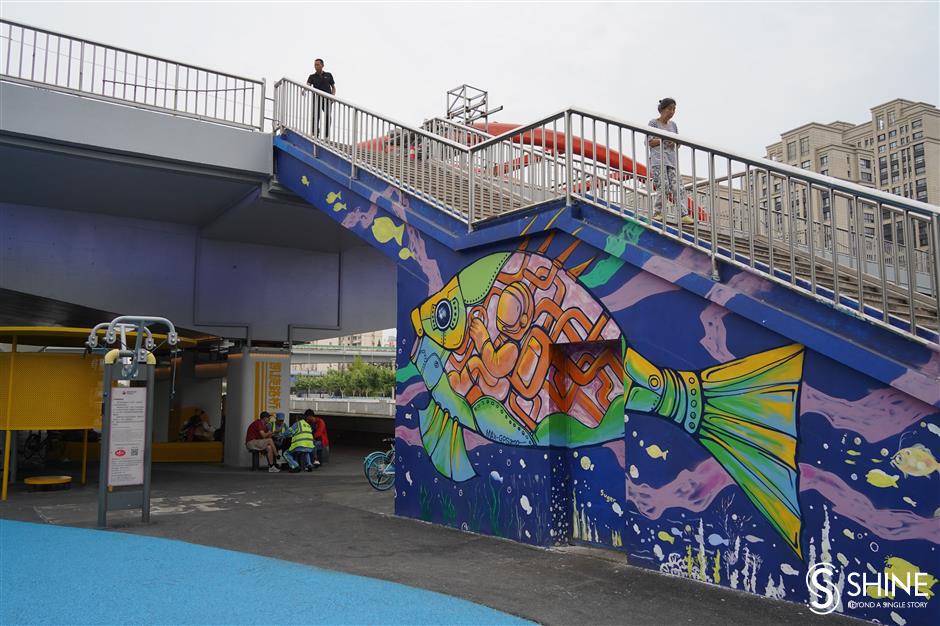 A colorful mural under the Middle Ring Road in Changning District.

When night falls, the green landscapes are illuminated by warm yellow shafts of light, evoking a scroll painting of a natural forest.

The city's green forest coverage will amount to 23 percent by 2035, and will constitute more than 30 countryside parks by that time, according to a recently released blueprint for Shanghai's ecological space design between 2021 and 2035.

The goal is to create an "ecological city" in gardens, surrounded by forests and featuring blue skies, lucid waters and green spaces.

The "ecological city" will be supported by parks, forests and wetlands as well as greenways and ecological corridor networks.

By 2035, the city's 23 percent forest coverage will contrast with 18.49 percent last year. Its per capita greenery space will be at least 13 square meters. The 30 countryside parks will be more than four times the current seven parks.

The length of key greenways will be at least 2,000 kilometers, and the protection of wetlands will be over 50 percent. 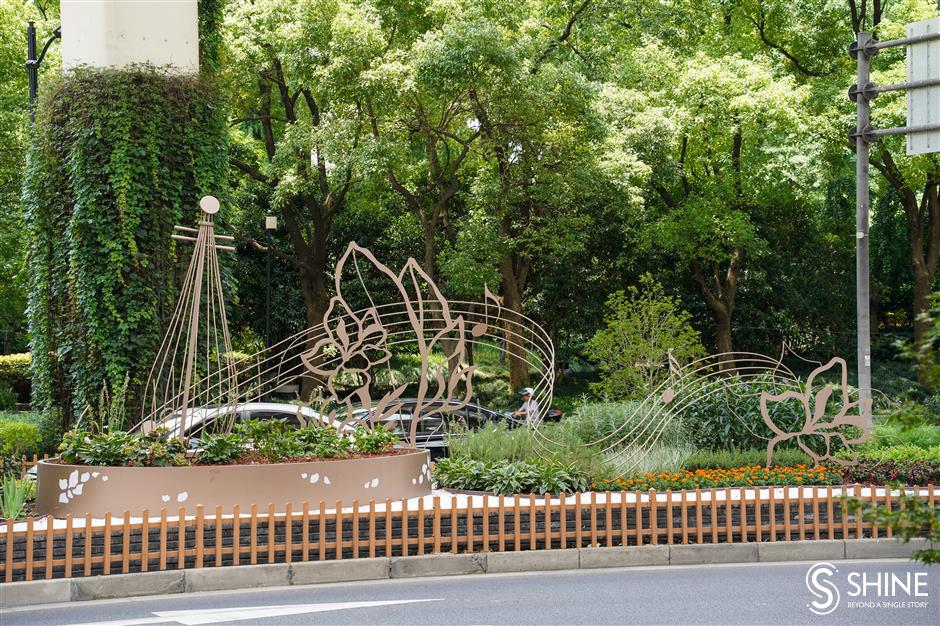 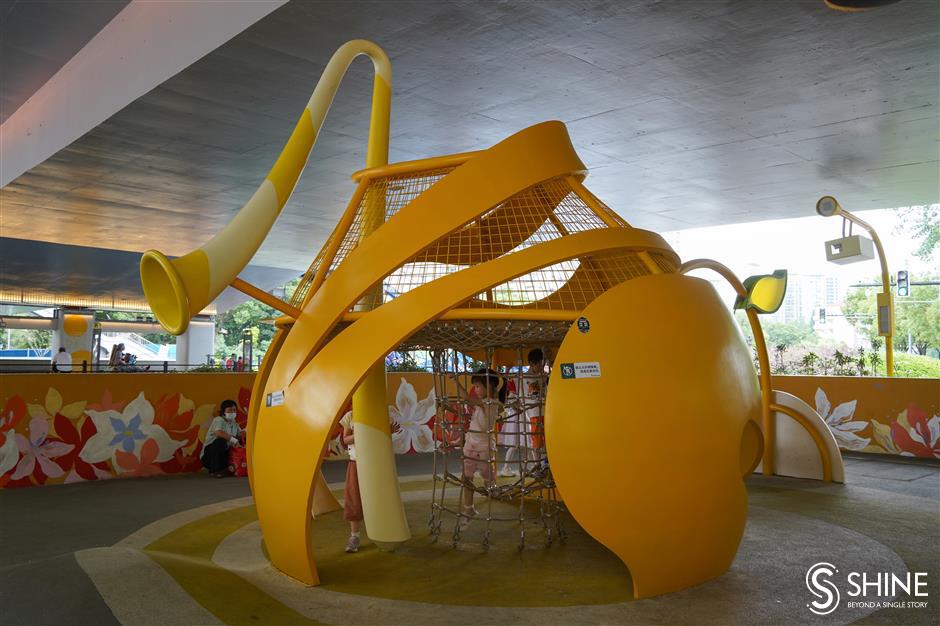 A child plays on an activity installation under Kaixuan Road Bridge.

By the end of 2025, there will be more than 1,000 city parks, including about 50 community-based parks in the five "new cities" in Jiading, Qingpu, Songjiang, Fengxian and Nanhui, and along Suzhou Creek and Huangpu River.

The city's "pocket parks," or parkettes, are not parks in the traditional sense, but small gardens and greenery areas dotted here and there on street corners, in industrial zones or among the towering apartment complexes.

"We aim to create a green city with a number of big projects, including parks, greenways and forestland," said Deng Jianping, director of Shanghai Greenery and Public Sanitation Bureau.

"The goal is to enhance the public's sense of happiness," he said.

There will be another 1,000 kilometers of greenways in the city by the end of 2035, with 10 along the Chuanyang and Dianpu rivers being among the key projects. 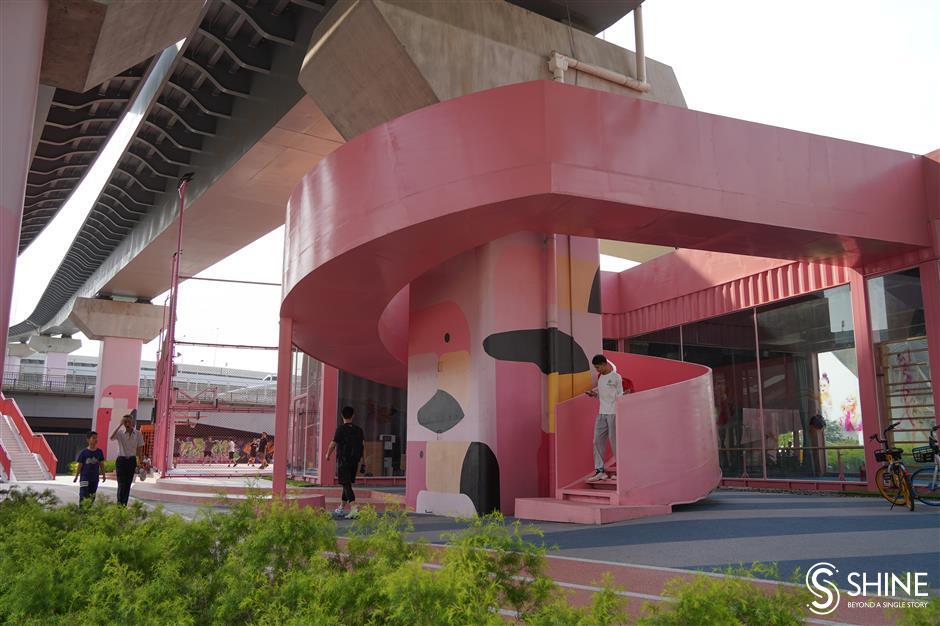 A public leisure space under the Middle Ring Road in Changning District. 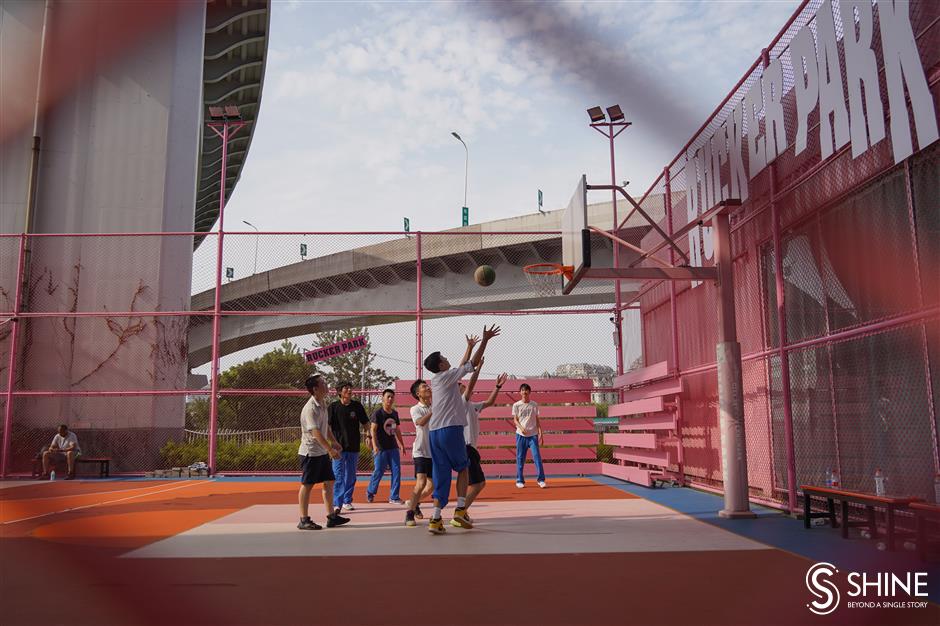 People play basketball on a court under the Middle Ring Road. 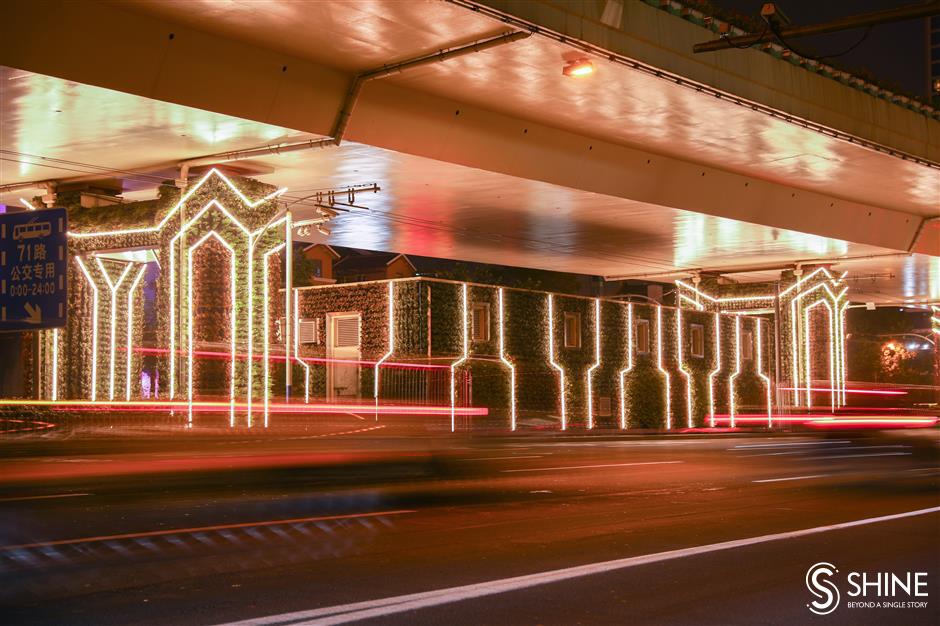 The greenery landscape under Yan'an Elevated Road is illuminated at night.