For decades, Zhang Hongwei, 53, commercially fished the waters of the Yangtze River near Shanghai. This year, he had to give up his boat and fold up his nets.

On January 1, a new 10-year moratorium came into force, prohibiting fishing on all natural waterways of the Yangtze River system.

Zhang was lucky to land a new job as first mate on a patrol ship operated by the fisheries administration on Chongming Island. He now surveys his old river haunts looking for illegal fishing.

"In the past, I worked on boat, and now I still work on boat," he said. "When I was a fisherman, I had to work day and night, all year round. It was a tough job and could be dangerous. What I am doing now is safer and less demanding."

All 192 local fishing boats that once plied the Yangtze River have now ceased operations, according to Li Furong, deputy chief of the Committee on Agriculture and Rural Affairs under the Shanghai People's Congress.

Aside from older fishermen who retired, 194 fishermen have found other jobs, Li said.

The majority of Shanghai fishermen affected by the ban live on Chongming Island. Many are descendants of generations-old fishing families in neighboring Jiangsu Province. 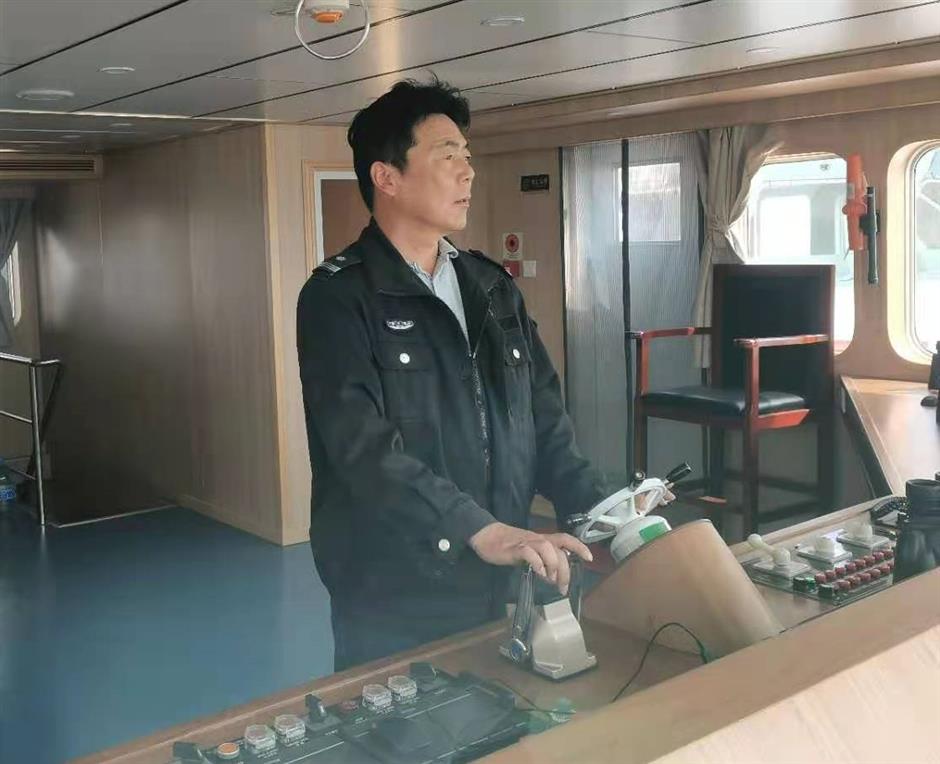 Former fisherman Zhang Hongwei operates a fishery administration ship during his daily patrolling to check for illegal fishing in the waters off Chongming Island in Shanghai.

During his childhood, Zhang learned how to fish from his father and grandfather and started fishing on his own when he was 16. He worked on ocean trawlers for about 10 years and then owned his own boat for about eight years.

In 2002, however, China issued strict regulations controlling marine fishing in order to protect deep-sea resources. As a result, Zhang turned from fishing in the ocean to fishing in the Yangtze River.

"When we were out catching 'knife fish,' we would return home once a week or every 10 days," he said. "It all depended on the size of the catch and fish market prices."

Aboard his boat, Zhang and colleagues would start work at dawn and stay up until nearly midnight. One man was always on overnight duty to make sure that the boat was operating well.

"Once I was on the boat when a storm came and the engine conked out," said Zhang. "We had to get someone to haul the boat to shore. It was really dangerous."

Moreover, there were always risks of collision between small fishing boats and larger vessels, sometimes resulting in death.

After the ban came into effect on January 1, all fishing licenses were revoked. Those who lost their livelihoods were eligible for social security and help in finding new jobs.

"We raised subsidies, solved employment problems and created incentives for fishermen to go into other jobs," said Gong Hongxin, Party secretary of the law enforcement team with the Chongming District Commission of Agriculture and Rural Affairs. 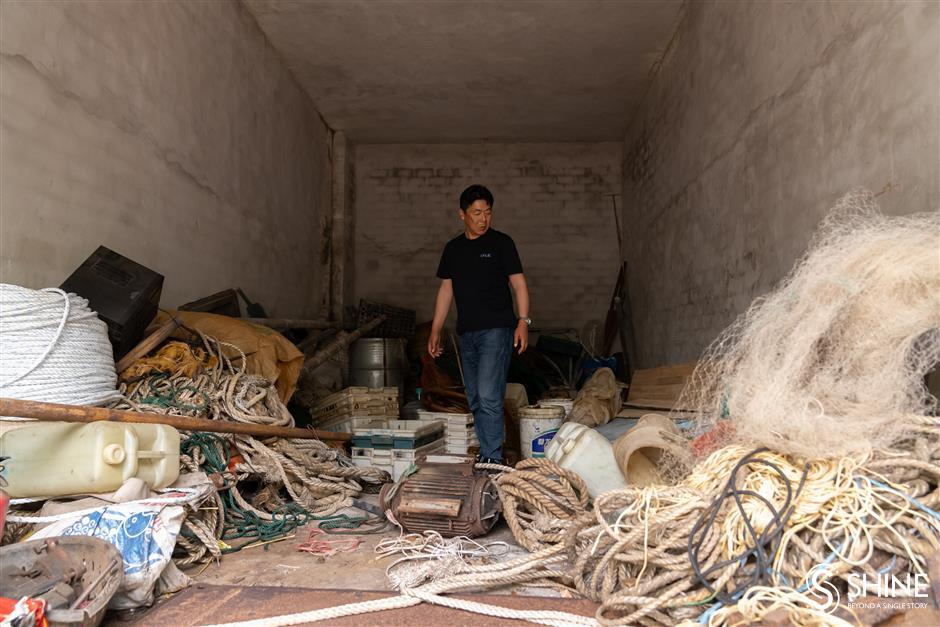 Zhang Hongwei stands at the warehouse where parts of his dismantled fishing boat are stored.

The fisheries administration has recruited several former fishermen like Zhang to take advantage of their familiarity with the waterways and marine conditions.

Zhang, who lives in the Chongming village of Yuye, is content with his new life. It gives him more time with his family.

"Our ship sets out at 7am every morning to go on patrol and look for illegal fishing, " said Zhang. "We return to port for lunch, then go out again until 4pm."

Liu Yongcun, another former fisherman in the village, said he has no complaints about the turn of events.

He was born on a fishing boat and fished most of his life. But he admitted that his income had dwindled over the years and the work had become harder as he aged.

"This new policy is good for the ecology of the Yangtze River and also good for fishermen, many of whom are in their 50s now," Liu said.

Finding new jobs hasn't been easy. Many fishermen have scant education and no skills for other jobs. For older fishermen, the village provided some jobs as sanitation workers, security guards or waterway cleaners.

However, not all of them relinquished their former life easily.

One fisherman surnamed Xu initially refused to sign an agreement to give up fishing, arguing that he didn't know how to do anything else. Having been his own boss for so many years, he said he didn't want to work for someone else.

To get him to change his mind, local authorities visited his home many times. After two months of efforts, Xu finally came to grips with the fishing ban and now works as a driver for the hailing service Didi.