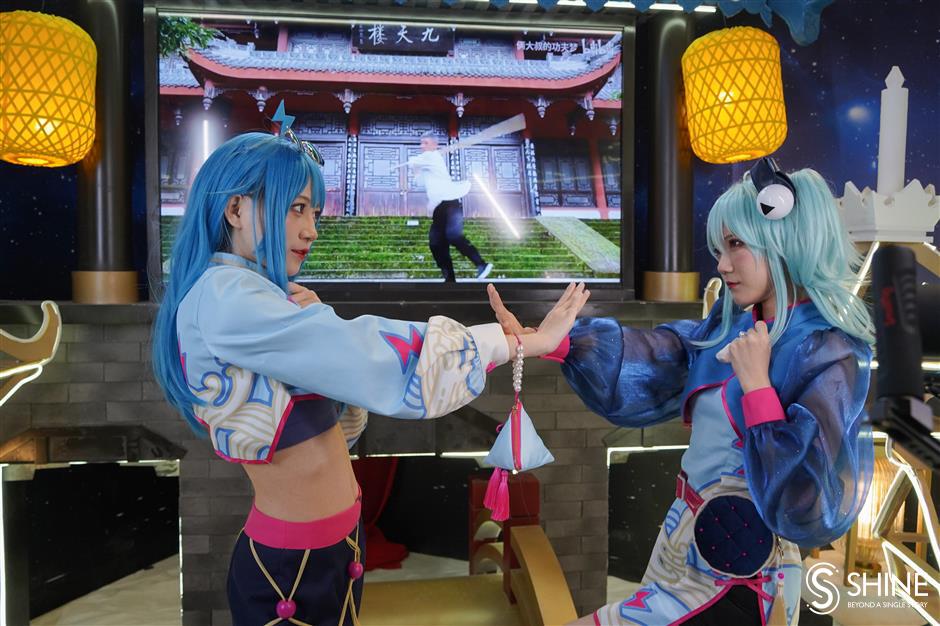 Two Cosers imitate the postures of martial arts fighters from a video shown on the screen at the 17th China International Cartoon & Game Expo in Shanghai.

The Chinese animation series, adapted from a novel written by author Mo Xiang Tong Xiu, was shown in the section of video-sharing site Bilibili.

"It's great to have our own works, which we can find in our history books," Guo told Shanghai Daily. And the scenes are as well-made and beautiful as those from Japan and South Korea, she added.

In the past, ACG lovers often visited exhibitions like CCG to look for the latest in their favorite Japanese animations or foreign games. Now original works and Chinese elements can be found almost everywhere at the expo, and are sought after by youth, mainly the Generation Z, referring to those born between 1996 and 2010. 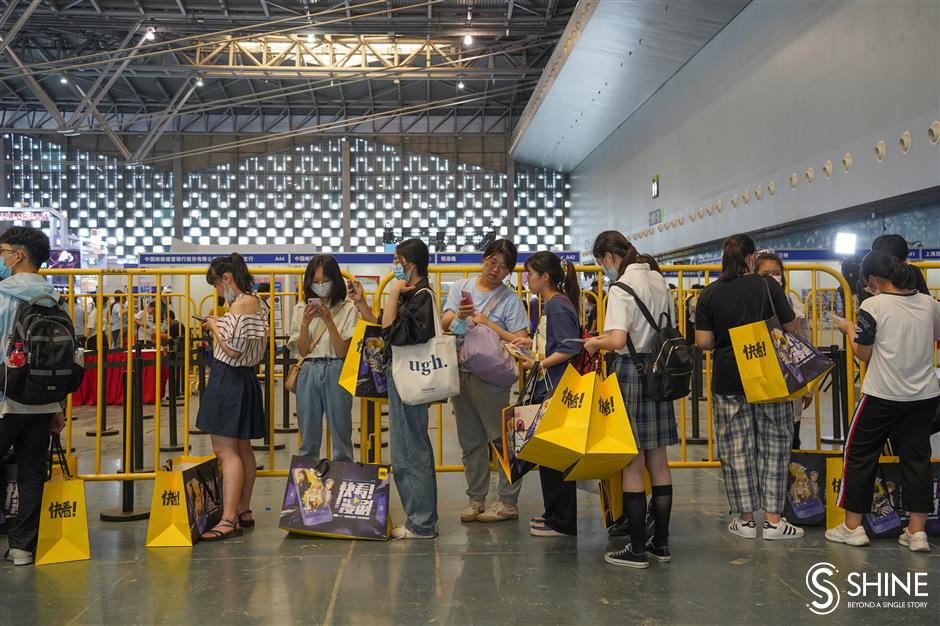 At the section of Kuaikan Comics, one of the biggest comic websites in China, comics drawn by domestic cartoonists have been made into short videos and are played on screens.

According to Zhao Ziru, head of branding at Kuaikan, the 7-year-old platform has more than 5,000 cartoonists, over 8,000 comics and a total of 200 million users.

"We began in 2014, when most of the Chinese comic fans were fond of Japanese manga," Zhao said.

"Kuaikan is the first platform for Chinese cartoonists. Now the comics on our platform are widely accepted by readers in countries like Japan and South Korea. Part of works even gain popularity and rank high on South Korean comic platforms."

To meet the growing needs of users, Kuaikan started adapting popular novels into comics, such as "The Founder of Diabolism," another work of Mo Xiang Tong Xiu. Meanwhile, they try to make the comics more understandable in form of short video series, with famed actors dubbing the characters, as more and more netizens prefer watching videos. 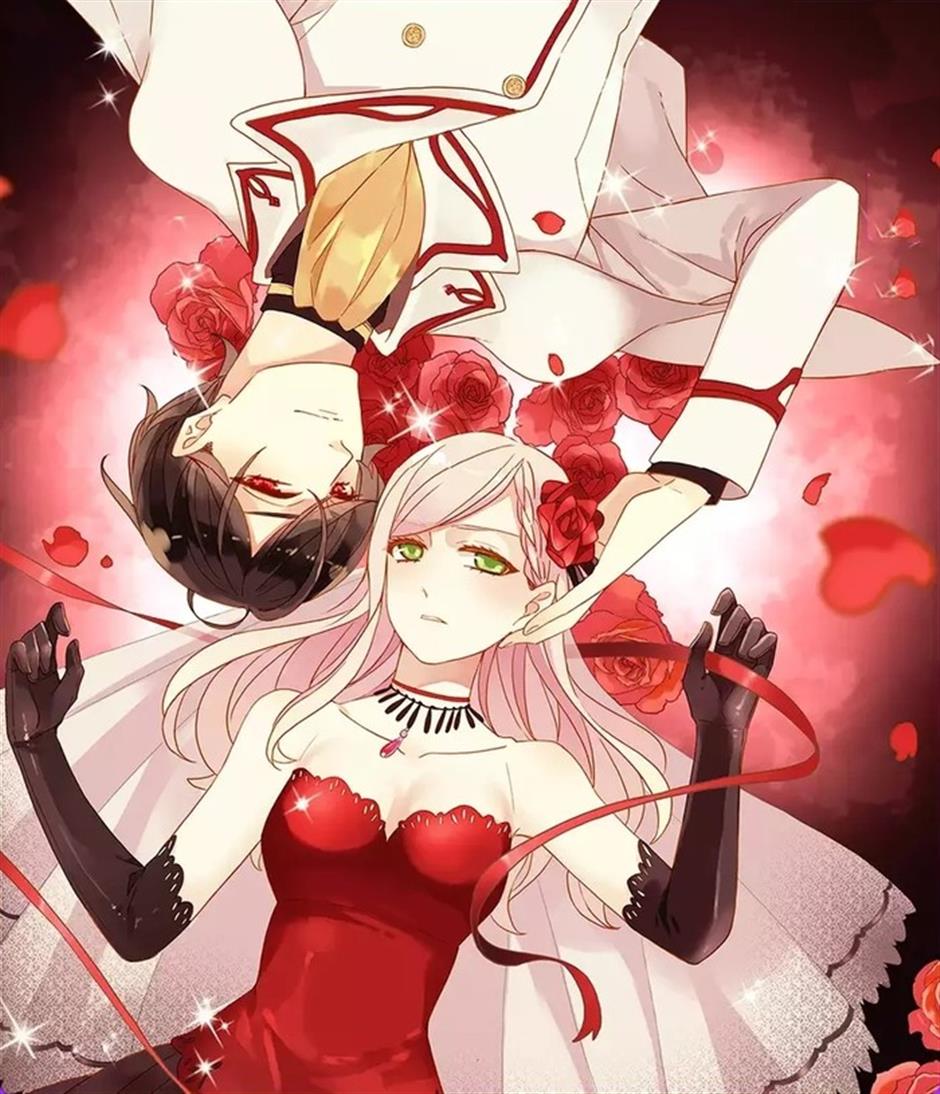 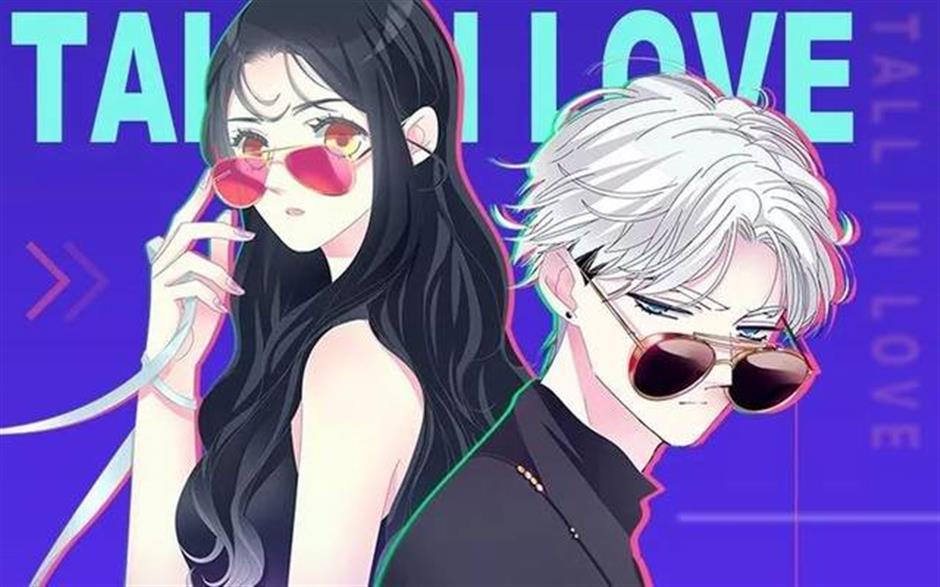 Each short video lasts about three minutes, and every series has 10 to 20 episodes.

"We began promoting Chinese comics overseas," Zhao said. "Currently, we have users in countries including Japan, South Korea, the US and  East Asia. This year we have launched a new 'Columbus' project to allow more Chinese works to be seen abroad."

Zhao said they have cooperated with many translation and overseas promotion organizations to make their work adaptable to different cultures.

So far Kuaikan has promoted more than 100 Chinese comics overseas in 11 languages. Last year two comics "Sweet Bite" and "Fall in Love" each brought the platform more than 1 million yuan (US$154,400) in income. 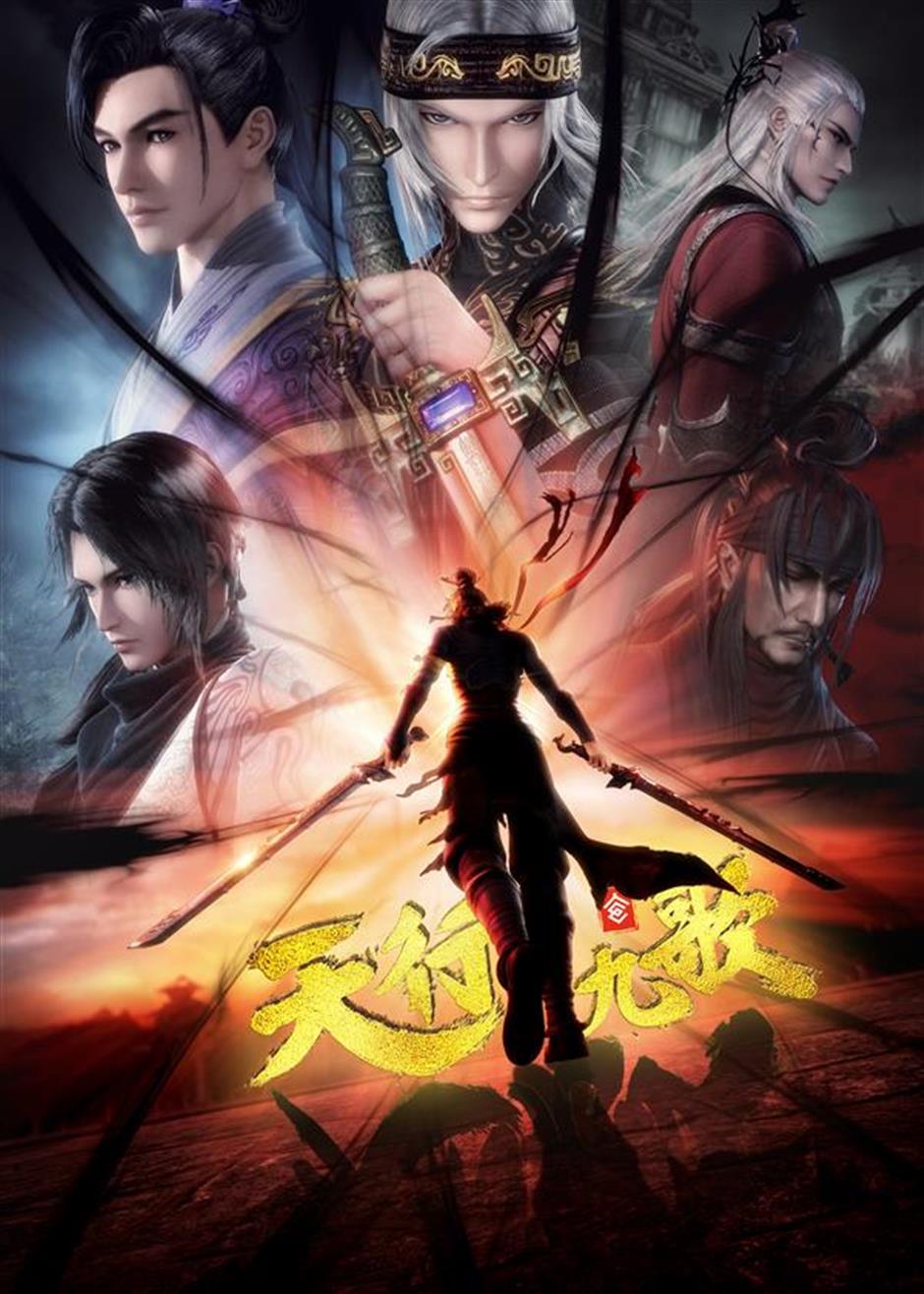 "Nine Songs of the Moving Heavens"

Sparkly Key Animation Studio is a Hangzhou-based producer making Chinese original animations. It brought five of its works – "The Legend of Qin," "Nine Songs of the Moving Heavens," "Wu Geng Ji," "Soul Land" and "Legend of Exorcism" – to the CCG expo together with themed products, stage shows and on-site interactive games.

These works all feature the setting of ancient China.

A Sparkly Key staffer told Shanghai Daily that they chose "Chinoiserie" animation as their starting point because they believe historic stories and martial arts would be more appealing to an overseas audience as well as Chinese viewers.

"The Chinoiserie animation will give the audience different understanding toward some historic figures," he explained.

"The Legend of Qin" has been promoted to more than a hundred countries and regions overseas and won many international awards.

"We hope more companies can make original Chinese animations so that the market can grow," the staffer said. 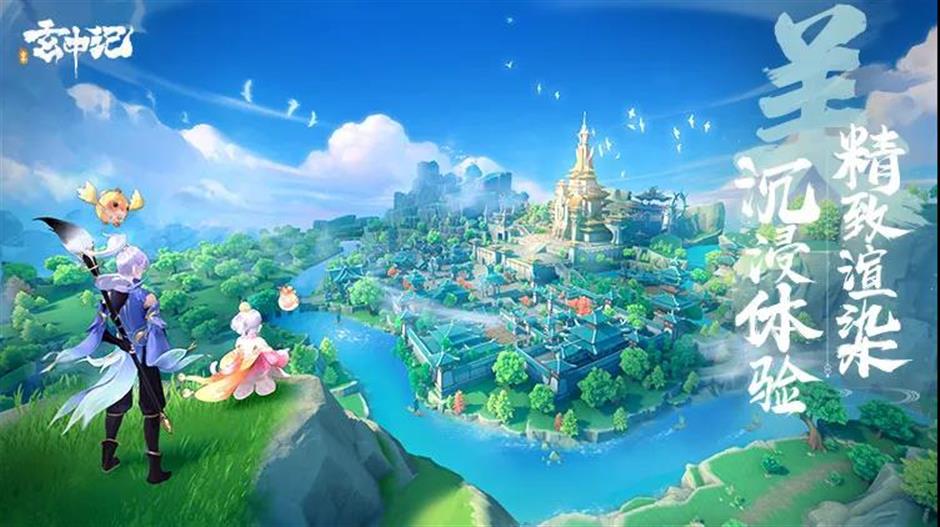 A 3D Chinoiserie game "Xuan Zhong Ji," developed by Kingnet and published by Tencent, will go online later this year.

The 3D Chinoiserie game, developed by Kingnet and published by Tencent, will go online later this year.

Under the background of Chinese myth, the players will encounter various gods, elves and monsters, catching them and training them as their own pets. Players can fight against enemies with these magic pets.

"Figure Story," Kingnet's another original game displayed at the exhibition, is developed by its subsidiary Sheng He Game with ideas derived from figures and fashionable toys that are popular among the young people. 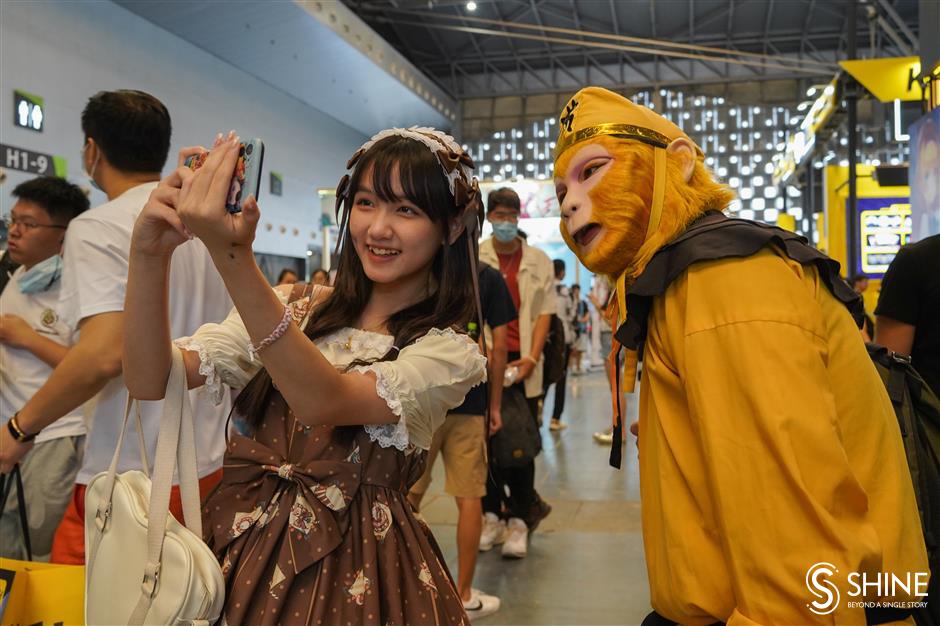 A female visitor in a Lolita dress takes a selfie with a Coser in the costume of legendary Monkey King at CCG.

Many of the fans and Cosers of Chinese cartoons at CCG expo are teens; a Coser is a person in a costume posing as a cartoon or game character.

"I'm a bit anxious," Zhao said. "But seeing so many compatible friends also make me excited. I hope I can meet more Cosers."

When talking about Chinese cartoons, Zhao couldn't contain his excitement. He recommended "Heaven Official's Blessing" and "Grandmaster of Demonic Cultivation."

"They have lots of our Chinese elements," he said. "We can learn about the essence of our own culture."

Zhao also shared his expectations for the future development of Chinese cartoons.

"We've got a good start," he said. "But there is still a long way to go. I hope Chinese cartoons can be with us all the way." 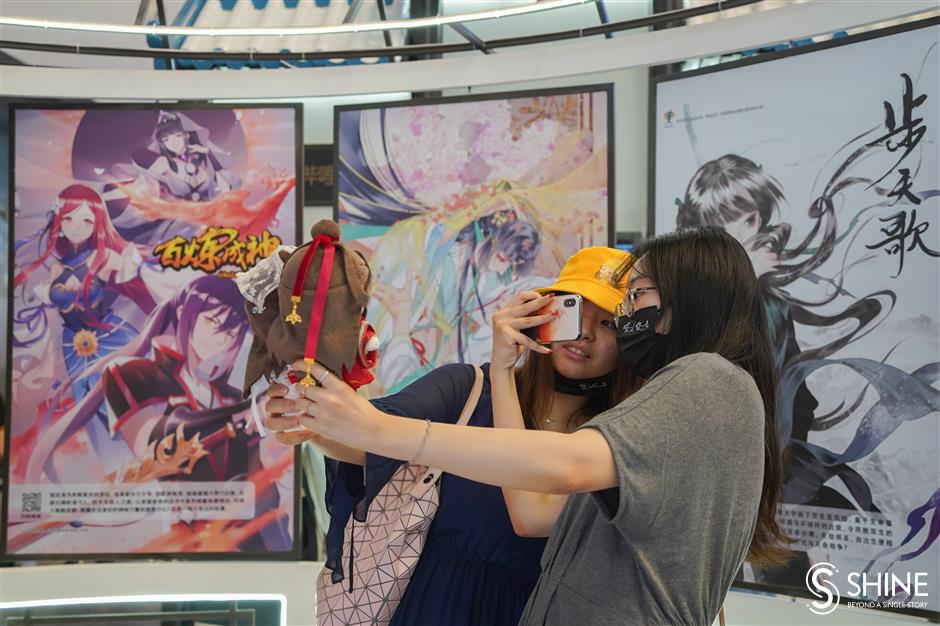 Two visitors take a picture of a doll, a character of Chinoiserie cartoons, in front of Chinese original cartoon works.

Yang, 15, took part in the CCG with his mother. She plays the role of Xielian in "Heaven Official's Blessing."

In her daily life, she wears Hanfu sometimes, being addicted to Chinese cartoons.

"I think there have already been many fans of Chinese cartoons," Yang said. "And there will be more, as Chinese animations are increasingly going international. For example, 'Heaven Official's Blessing' has released various versions such as Thai."

This year's CCG also has made some attempts to cross the borders between different industries.

The Mecha can be either an aeroplane or a robot. 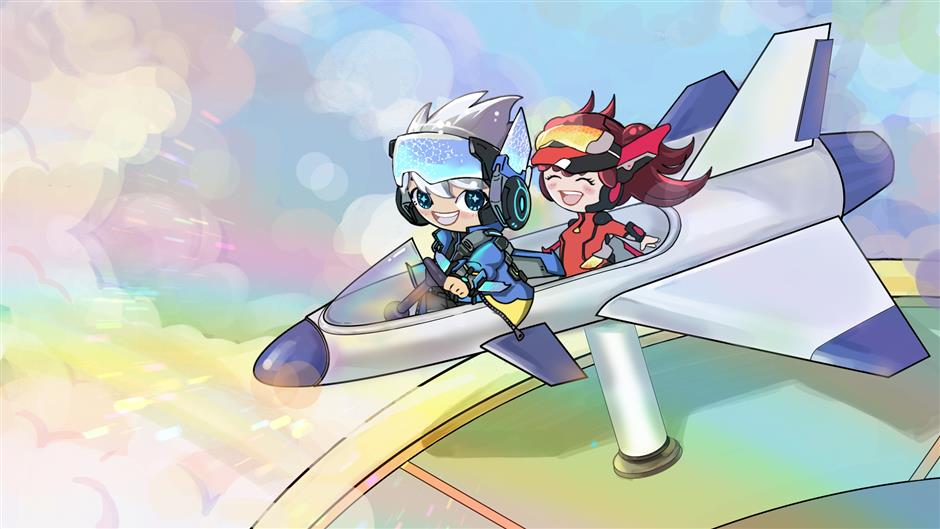 Its brand Aerokids uses cartoons to introduce the nation's aviation history and industry to children.

Bank of China built an ancient Chinese-style qianzhuang, or private bank, at the scene and exhibits the currency people used in different periods of history with cartoon elements.