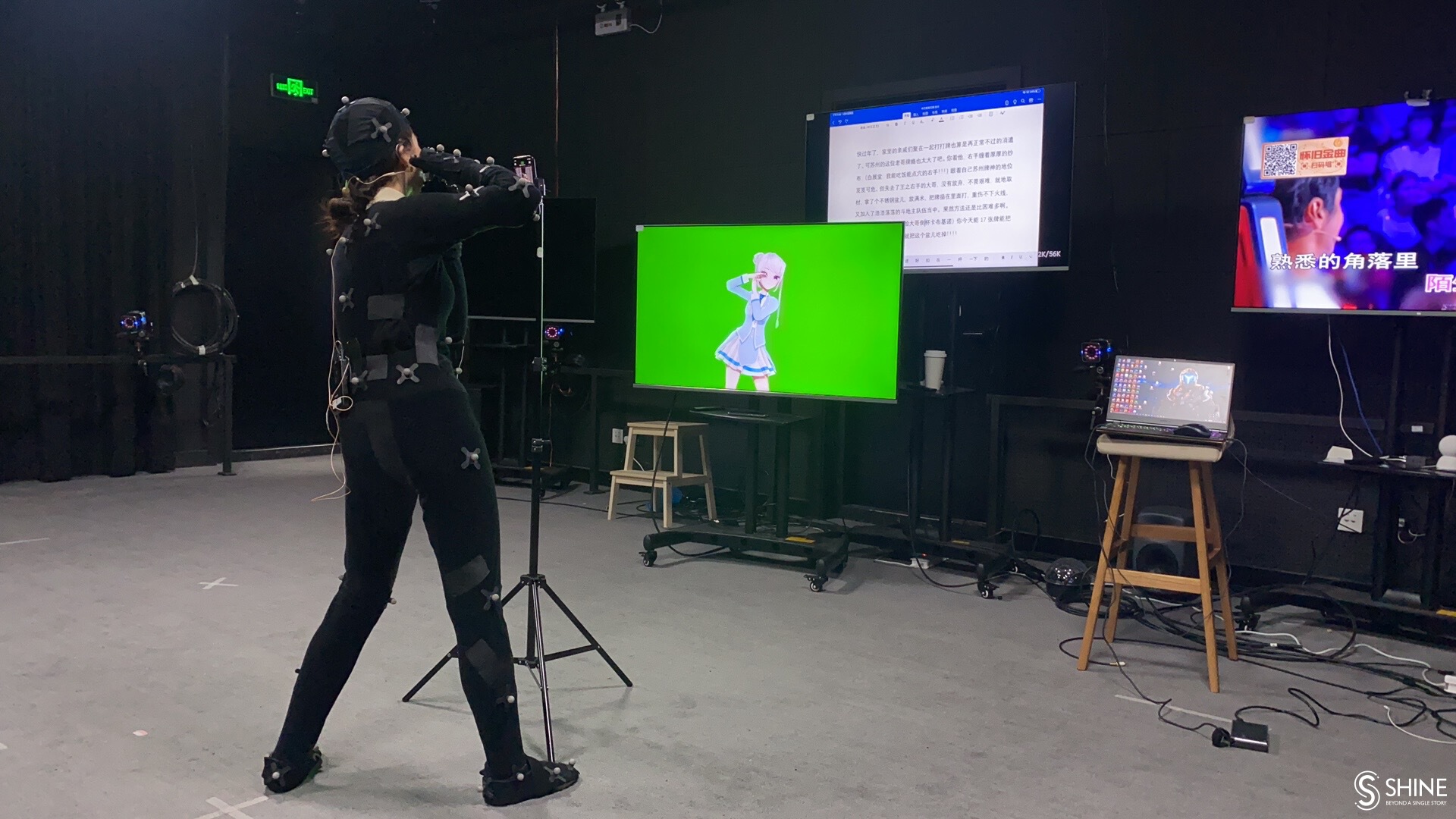 Shen Xiaoya, a hostess for Shanghai Media Group, showed up at three major events this month, touting use of China's new e-yuan, visiting exhibition booths, promoting artificial intelligence and the realm of online games and cartoons, and even doing a bit of dancing.

Her influence is real if she herself is not.

Xiaoya is a digital animated character known as a "virtual uploader."

She has appeared in various live news reports, broadcasting events and events for foreign invested companies – popular with both elderly and younger audiences.

Her name is derived from "Shen," a traditional name for Shanghai handed down from the fief of Chun Shenjun, a famous lord in the Warring States period (475-221 BC).

At the World Artificial Intelligence Conference 2021, Xiaoya appeared on a screen wall at the booth of the Bank of Communications. There she talked about the nation's new digital currency, the e-yuan, and showed how to apply for a wallet of the currency. She also touted a new online hospital reservation system launched by the bank and other financial services providers.

Xiaoya showed up at the recent China International Cartoon & Game Expo as well, where she appeared at the Shanghai Media Group booth and generated great visitor interest.

Xiaoya also appeared at BilibiliWorld 2021, an exhibition of the animation, cartoons and games industry. Following her footsteps and interviews, visitors learned about industry innovations, shows, products and technologies of the show.

During the event, she also met other "virtual uploaders," including Yousa, Kizuna Ai and Hiseki Erio, as well as uploader groups like A-Soul and Xuefeng.

More VUP characters are expected to show on ChinaJoy, or the China Digital Entertainment Expo and Conference, which will open in Shanghai on Friday.

As Asia's biggest gaming fair, it will feature eSports, livestreaming, virtual characters, 5G and cloud games, as well as an online carnival zone called ChinaJoy Plus.

Virtual characters are becoming stars in China thanks to broadcasting platforms and social media, like Shanghai Media's Knews, Bilibili, Kuaishou and Douyin. In overseas markets, they are called "VTubers," performing in platforms like YouTube and TikTok.

Virtual entertainment on Bilibili has become an increasingly dynamic content category, particularly since the coronavirus outbreak restricted travel. In the first 10 months of 2020, virtual livestream viewing hours increased by over 200 percent from a year earlier, according to media reports.

A graduate student who gave his name only as Vito is majoring in computer science at Zhejiang University. He visited Shanghai to attend BilibiliWorld this month. His top destination was the A-Soul booth, but he found it difficult to get close because there were so many fans there.

"That's my favorite group," he said. "It's worth taking the time to come and see them, and record their performance."

On Bilibili, Xiaoya posted two video clips related to the event, including a dance performance of the Xuefeng group with her. The videos attracted over 150,000 views and many "likes."

Even small teams or individuals on limited budgets are capable of creating virtual uploaders, according to technology companies like Nvidia, the world's biggest AI and computing firm.

The company has launched the Nvidia Studio platform with special optimization for graphic cards with over 70 worldwide mainstream design software and engines, like Unreal Engine 4, Maya and Redshift used by Shanghai Media's Xiaoya creation team.

The team can create Xiaoya with real-time rendering and the matching of human bodies with virtual characters. The technology is mature on facial motion capture, rendering and matching, SMG said.

Xiaoya's clothes can "sway naturally" now but they used to look like "a piece of iron." With more upgrade on RTX graphic cards and algorithms, Xiaoya can stand at "bigger and real stages" in near future, the team said.

Shenzhen-based Zhuiyi launched a new generation of digital characters during this year's World Artificial Intelligence Conference, with applications that can be used in commercial sectors such as online virtual assistants in banking.

SenseTime, one of most valuable AI firms in China, offers technologies for virtual uploaders that combine artificial intelligence and mixer reality technologies. It worked with Bilibili to create a virtual zone of "parallel universes" for visitors.

It's getting easier and easier for virtual creators to build their own uploaders and fantasy worlds online, Bilibili uploader Zhu Minghua said at the BilibiliWorld event.

Zhu, with nickname Zimin, has 2.9 million fans, showcasing his latest China-themed scenes in the game "Minecraft."

Nvidia launched its Canvas application with deep-learning technology , which can automatically turn simple sketches to vivid landscape scenes within seconds. The Nvidia Canvas application is favored by creators and designers globally.