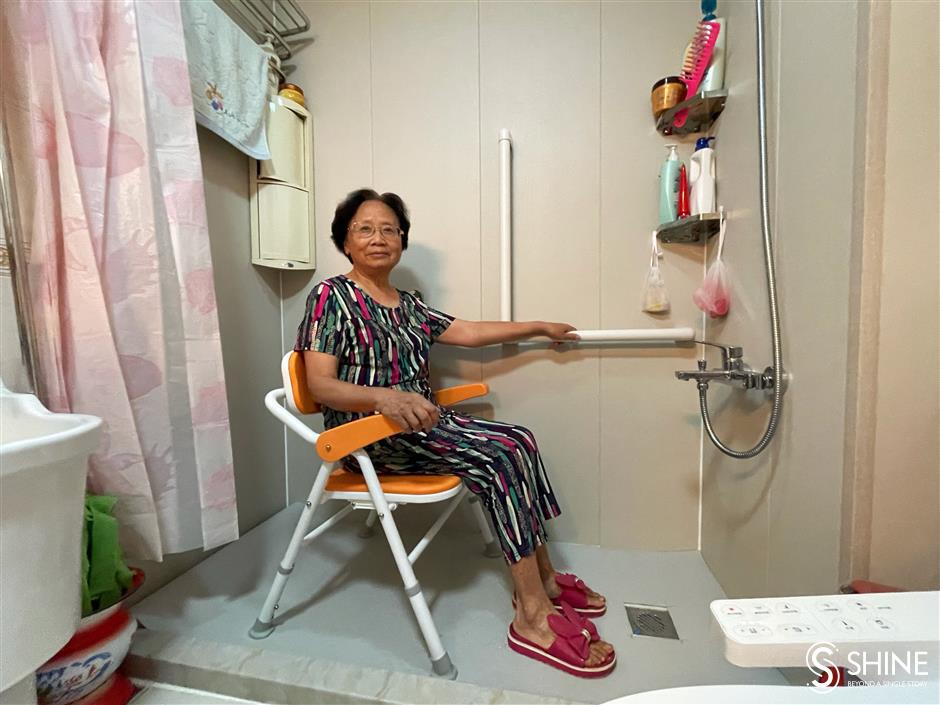 He Xiaozhu, 83, is satisfied with the upgrade of her restroom. 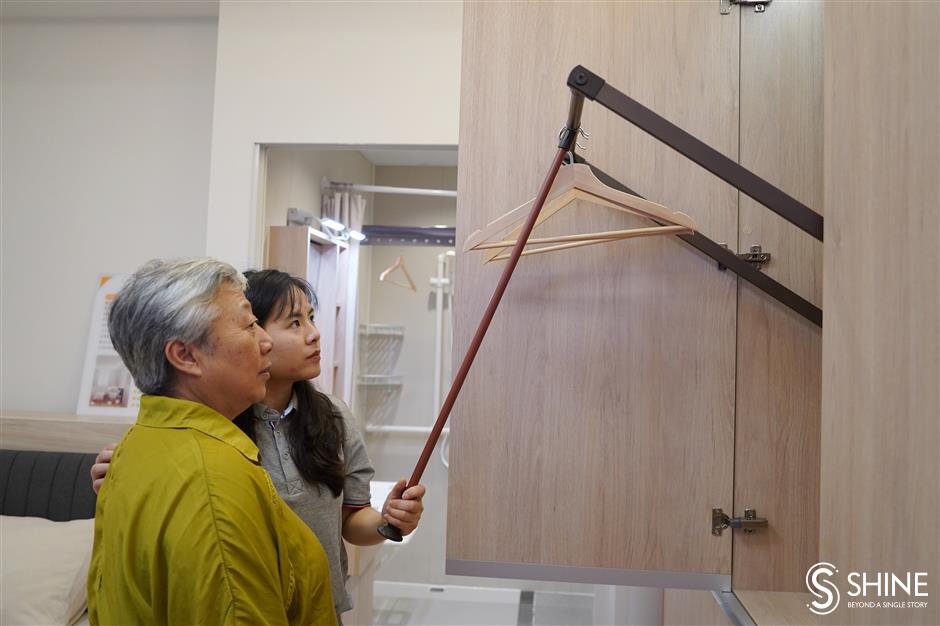 A senior is shown the convenience of a renovated cupboard.

A safer and age-friendly living environment for the city's older residents is being rolled out citywide as part of a renovation program of senior citizens' homes, Shanghai's civil affairs authorities announced on Tuesday.

Under the program starting this month, the upgrade covers toilets, kitchens, living rooms and bedrooms and involves about 60 varieties of more than 200 items. Prime consideration is being given to the demands of safety, convenience and health, according to the Shanghai Civil Affairs Bureau.

The improvements will cater to both general and personal needs of elderly citizens, said Jiang Rui, deputy director of the bureau.

The basic new packages will include handrails, anti-skid products, monitoring and alarm facilities against fire and gas leakage, and disaster prevention devices.

Personalized packages include intelligent home furnishings and health-monitoring products and services to satisfy the diversified living demands of seniors. A shower room option is included.

Seniors at or above 60 years old living in the city are all eligible to apply for the services.

By the end of this year, all subdistricts and towns in downtown Shanghai will be covered by the program and 5,000 households will be upgraded within a year.

Seniors without children, or with physical disabilities or other difficulties are the priority, the bureau said.

Elderly residents who meet certain criteria, such as a pension lower than the city's average, will get an upgrade subsidy or, in some cases, be fully covered. 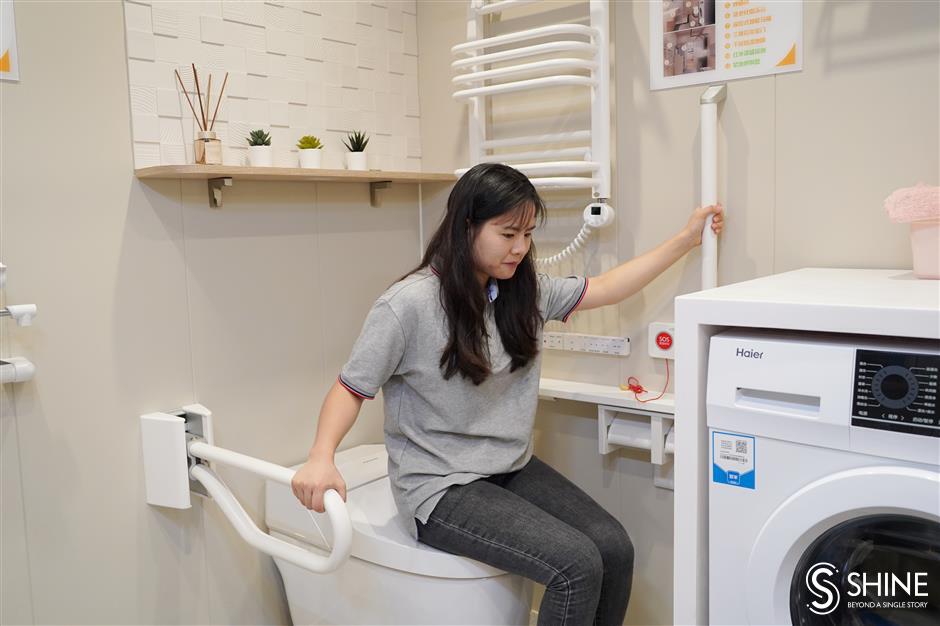 A staffer at Longhua Subdistrict center demonstrates the use of appliances.

"It is difficult for seniors to find service suppliers and, also, there was no standard in the area," said Jiang. "However, our survey found such upgrades are in big demand." A standard is being applied.

"Government authorities will be the platform linking demand and supply and we will check the quality of renovations after they're finished," said Jiang.

By the end of 2019, the city had finished renovation of 8,000 households with financial difficulty, improving their living conditions and quality of life, the bureau said.

At present, 4,072 households have submitted applications, and assessments have been done on 2,340.

"Compared with the city's aging population and the huge demand for renovations, only a small number of people could be covered, and lack of standards also posted challenges," said Ge Jian, deputy director of the bureau's senior service department.

He Xiaozhu, 83, who has lived alone at Xinzhuang Town in Minhang District since her husband died, recently had her restroom upgraded. She was very happy with the result as the bathtub was replaced by a shower room.

"In the past, it was difficult for me to step into the bathtub, but now, taking a bath is no longer a problem," she said. "The potential hazards of falling down have been eliminated," she added.

"I always wanted to have a shower room, but no decoration company was willing to take the order because it is small," said He, who is grateful to the renovation project.

At Shuiqing No. 1 residential complex where He lives, the homes of seven households have been upgraded.

"We did advanced screening of families who have senior residents living alone, as they are the priority of the program," said Shen Juhong, Party secretary of the complex's neighborhood committee. 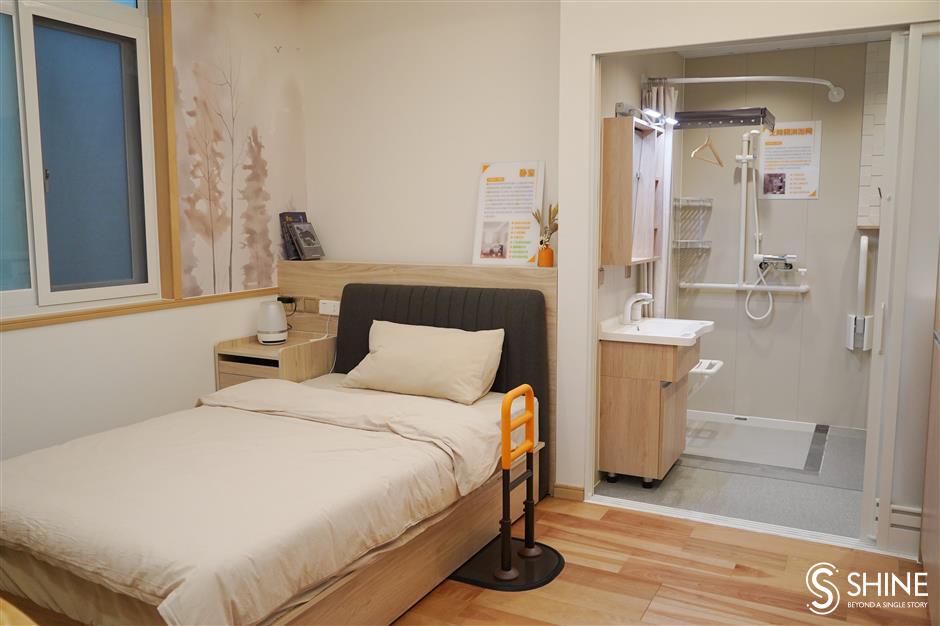 An example of living spaces at the Longhua Subdistrict center. 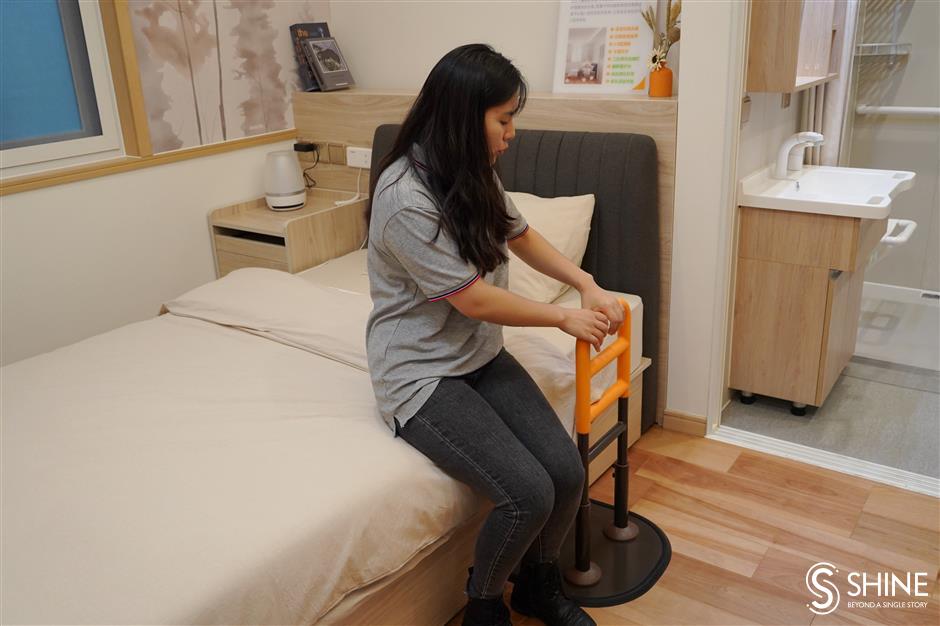 A staffer demonstrates the use of a handrail at the center.

It offers options for those considering applying for the senior-friendly upgrade service, including an exquisite room design and a neat furniture layout. It is fully furnished, with many senior-friendly designs and smart devices that add improved convenience and security.

"There are no steps between areas in the layout, making it easier for the elderly to walk and for wheelchairs to move around the room," said staff member Zheng Yunyan.

The restroom features anti-skid and anti-collision designs. The shower, washing area and toilet area are equipped with handrails to ensure safety and stability. There is also a clothing rack above the shower, plus a bath heater and ventilation.

Wu Ju'e, 69, plans to apply for a senior-friendly service package that converts a bathtub into a shower area. She said it is equipped with alarms and handrails that her own bathroom does not have, and would greatly improve the safety.

"The handrails can help elderly people stand up in the toilet," Wu said. "The bathroom alarm can help those who have trouble standing up seek help from people outside."