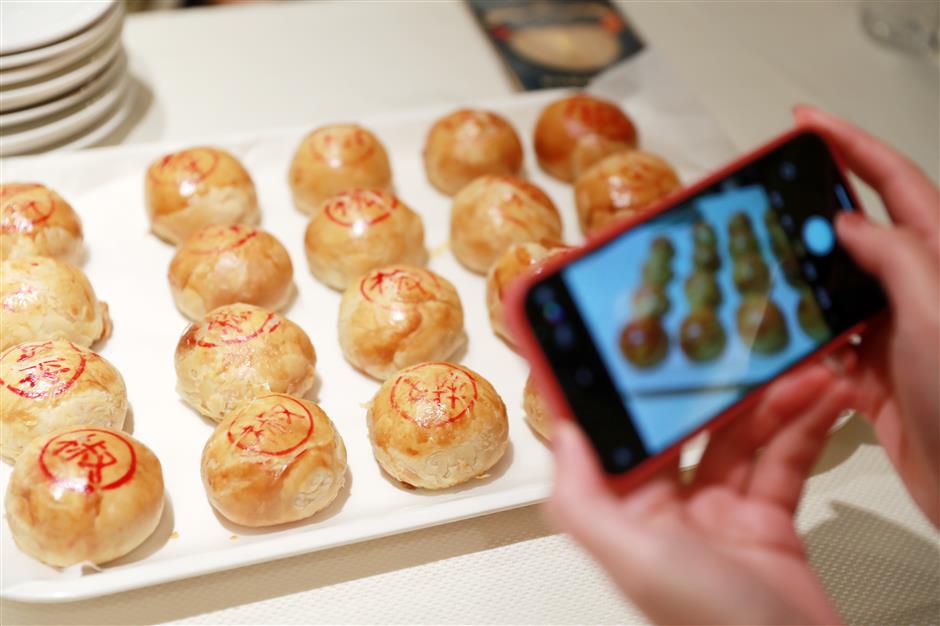 Freshly baked mooncakes stuffed with pork are served at the Sunya Cantonese Restaurant. 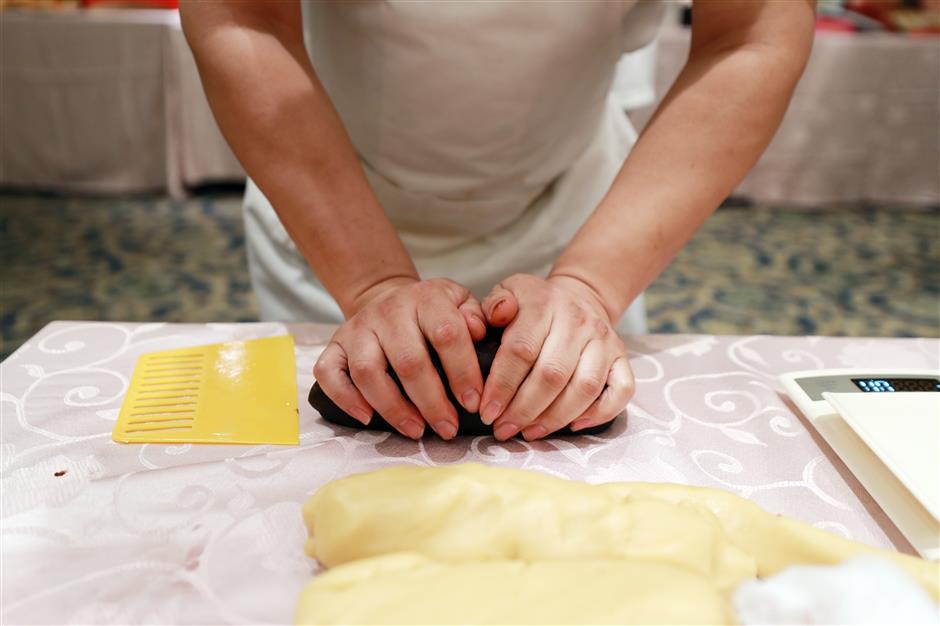 A chef at the Sunya Cantonese Restaurant demonstrates how to make mooncakes.

Weeks from the Mid-Autumn Festival, which falls on September 21 this year, the seasonal delicacy mooncake has already hit the shelves.

Most people's impression of the traditional food is that it is stuffed with pork, sweet-bean paste, lotus-seed paste or wuren, a five-nut stuffing that includes peanuts and walnuts, which is considered by some to be a bit rich and heavy. The pork ones are also too greasy, and red bean paste is too sweet.

Forget all that. This year's new flavors will surprise most and overturn their impressions.

Venerated eateries in Shanghai are injecting new vitality into mooncakes with unimaginable flavors to tempt even the pickiest palates as well as the young.

At the 95-year-old Sunya Cantonese Restaurant at Nanjing Road Pedestrian Mall, a cheese cranberry-flavored mooncake is this year's latest offering.

Innovation comes from bold combinations. Chefs have been taking an East-meets-West approach in making stuffings.

Kidney beans are combined with cheese and cranberry in mooncakes.

"We tried many recipes for the best combination and finally picked kidney beans," explained executive chef Huang Renkang of the restaurant, who has been in the catering industry for more than 40 years.

"Cheese and cranberry are popular flavors among young people, and tests were conducted again and again to try for the best proportion of ingredients," he said.

"The fresh taste of the kidney beans, ensured by boiling, grounding and seasoning, suits perfectly well with the rich cheese and sweet-and-sour cranberry."

Fish is very rarely used in mooncakes because of the bones, Huang explained.

"We use basa fish (a species of catfish) in our rattan pepper fish mooncake because it has few bones and is tender," he said.

People queue up at the Sunya Cantonese Restaurant to sink their teeth into mooncakes.

He said the spicy nature of the rattan pepper fish mooncake has been toned down to make the taste lighter.

"Innovation is the soul of time-honored restaurants, and is key for their survival," said Huang. "Without catching up with the trend, any restaurant will be sifted out."

A hit of the restaurant is yanduxian mooncake, a wanghong (online celebrity) mooncake.

Yanduxian is a traditional Shanghai soup of pork and bamboo shoots.

In previous years, people arrived at midnight to queue for it, according to Huang.

"But all wanghong food has its life circle, and you can not rely on one all the time," he said. "You need to keep innovating flavor and techniques of traditional food, which is why we launched cheese cranberry flavor this time."

"I came here to try the cheese paste because I love cheese, and I really look forward to the taste from such a magic combination," said young customer Iris Wu.

Liu spent one hour on the road from Minhang District to the restaurant just to buy the yanduxian mooncakes.

According to a salesman at the scene, although the rattan pepper fish mooncakes are mostly welcomed by young people, some older customers also enjoy its special spicy taste.

Sophisticated cooking techniques and everlasting innovations are both key in mooncakes. 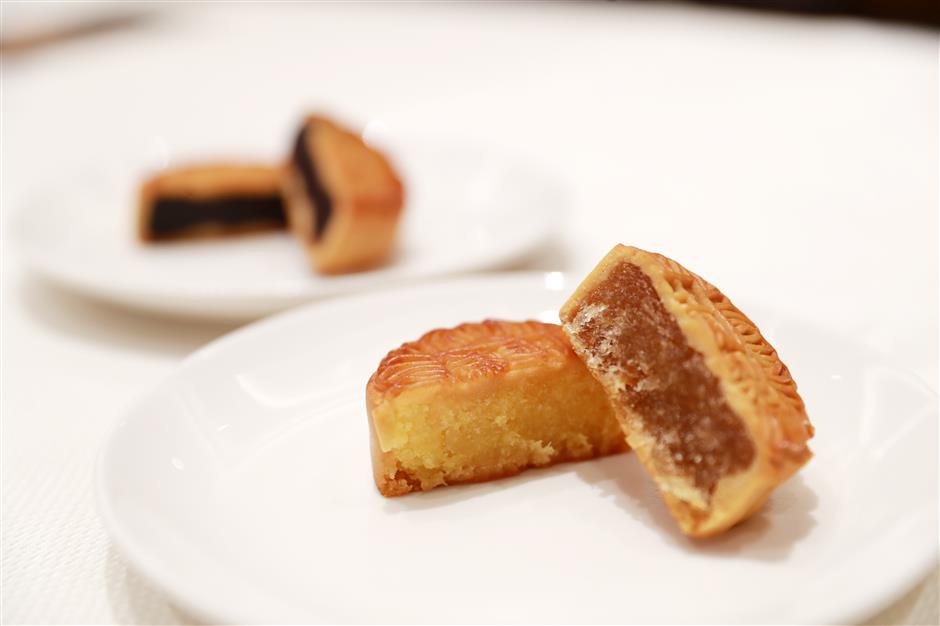 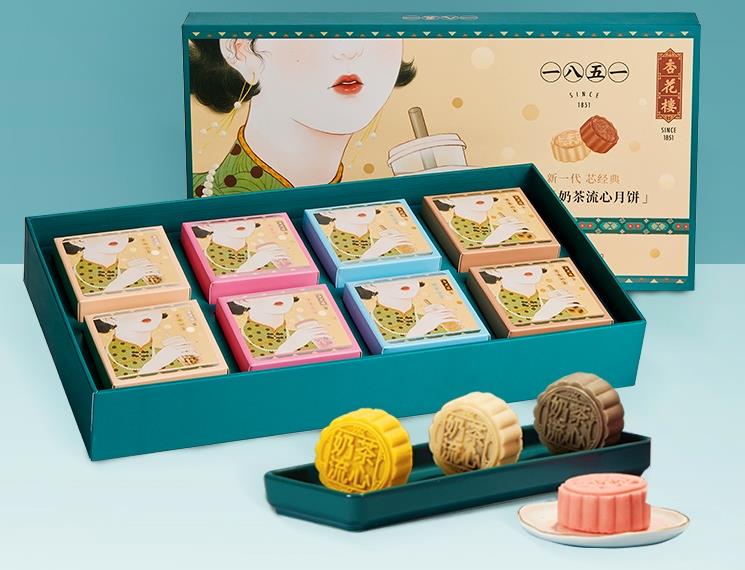 Stir-frying the shredded coconut slowly with condensed milk for one hour in pan made of purple copper ensures the fragrance and chewy taste of the coconut paste.

Every year, chefs at the restaurant adjust the recipe of sweet-bean paste to catch up with modern tastes while retaining the traditional flavor. This year, osmanthus coupled with lard and chenpi, or dried tangerine peel, make the list of new fillings inside the sweet-bean paste.

Lotus seeds have to be washed more than 10 times before going through the processes of boiling, pulping, grinding and shoveling. In order to make the lotus-seed paste "melt in mouth," it usually takes more than twice to grind and shovel those seeds.

When it comes to the bestsellers at the restaurant, freshly baked pork mooncake comes first.

Every layer among the total 12 layers of the gossamer-thin crispy crust outside the fresh meat mooncake is hand-made by experienced chefs, who must precisely pinpoint the ratio of flour, lard and water when kneading.

After being repeatedly knocked and hammered, the meatball will be wrapped into the dough. The fresh meat mooncakes should be first baked at high temperature for 15 minutes, then brushed with fresh egg, and finally put in the oven for 10 minutes. 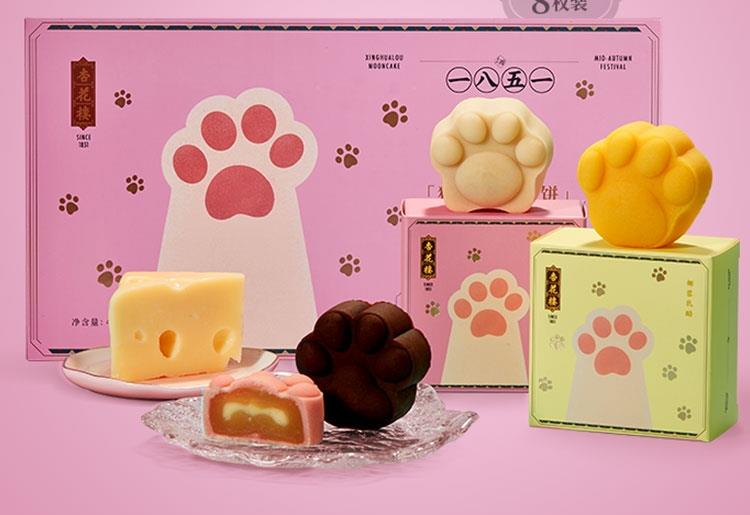 Xing Hua Lou, first founded in 1851, is one of the most famous Cantonese-style mooncake producers in Shanghai. It, too, is offering new mooncake flavors like creamy coconut jelly milk tea and brown sugar milk tea.

The cheese mooncake, shaped like a cat's paw, is flavored with coffee, toffee, desiccated coconut and lotus paste.

It is designed to lure young female consumers who like cute things.

In cooperation with Nestle, a coffee-flavored mooncake and a plant-based "meat" mooncake have been launched.

It took nearly 100 days to develop the recipe for the former, creating an East-meets-West product, and the later uses vegetable protein and natural plant ingredients in place of pork fat.

Xu Ting, a 30-year-old consumer, added: "I like drinking coffee in daily life and I am interested in tasting the coffee flavor. For me, traditional flavors such as pork stuffing is little bit greasy while red bean paste is sweet." 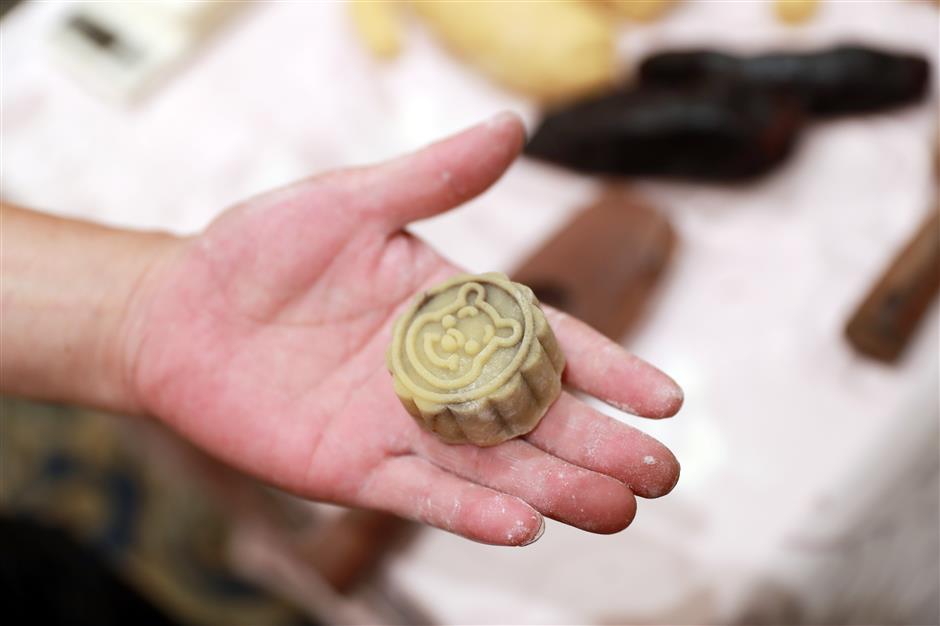 A chef at Sunya displays a freshly made mooncake. 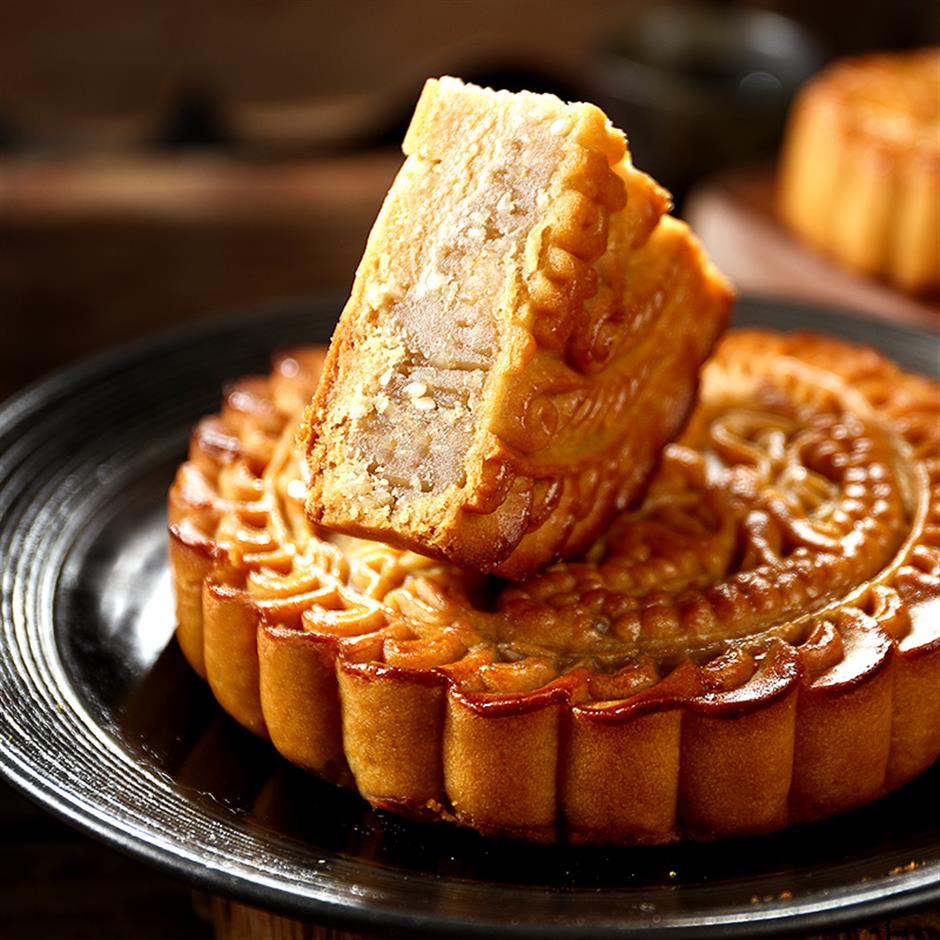 Daoxiangcun's Suzhou-style mooncake has 18 layers, each as thin as paper. Its mooncake-making technique was listed as an intangible cultural heritage of neighboring Jiangsu Province in 2009.

"It is a bold approach and the first time that Cantonese and Suzhou-style mooncakes are 'mixed' in one gift box," Huang Qiong, a staffer with Daoxiangcun, said.

Lu Jun, a marketing staffer with Xing Hua Lou, added: "All these efforts aim to cater to the taste of young consumers. Our survey found that young consumers aged between 20 and 30 particularly like cheese flavor."

Other time-honored restaurants don't lag behind in innovation and never fall out of favor.

"The technique involved is equal to cooking a dish," said Wang Xiang, a chef of the restaurant. "The green pepper is dried, ground into powder and then turned into pepper juice and added into meat paste.

"During stirring, a certain proportion of green pepper oil needs to be added continuously, and sausage is diced and added to enrich the flavor.

"Shanghainese traditionally like sweet flavor, but not that sweet, thus we must strictly control the sweet level of mooncakes."