Milk banks for infants an issue to keep abreast of

According to The Paper, these women posted breast milk sales information on social media and online community forums.

After buyers contacted them, they disguised the breast milk as products such as soap, cream, shoes and breast milk storage bags on platforms like second-hand e-commerce site Xianyu and then sold it.

Some directly sold the breast milk on social media at tens of yuan per bag.

Their customers include those allegedly buying for their children, and some believing in folk remedies that breast milk can enhance immunity and that applying breast milk on the face can help clear acne.

This belief in the health qualities of breast milk can be traced back to ancient times.

A wet nurse would be asked to mind her diet and behavior. And it was, in fact, not rare to see some adults drink breast milk for "better nutrition," especially among the rich and powerful.

One of the most famous persons may be the Empress Dowager Cixi, who drank breast milk every day to retain her youthful looks. Even in modern days, it's not uncommon for acquaintance mothers to share breast milk.

However, breast milk, which is not a common food resource, is banned from being sold as product by the National Health Commission, which issued a document to clarify it in 2000.

And since such breast milk hasn't gone through quality checks, it may cause some health problems to babies. It also has no benefits for adults. 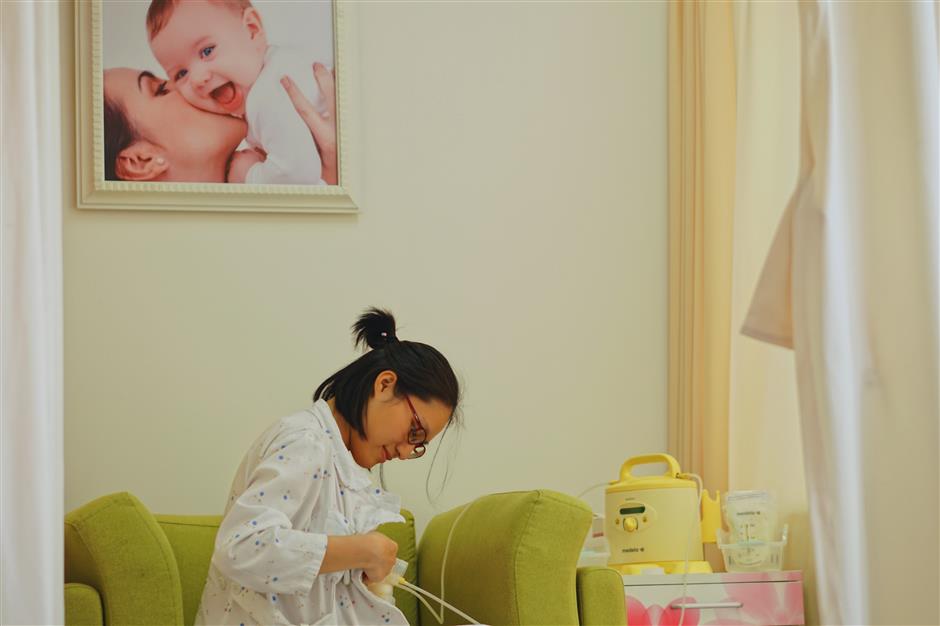 A mother donates her breast milk at the Children's Hospital of Shanghai.

On Tuesday, Shi Yingying, 38, a mother of two babies, was driven to the inpatient department of the Children's Hospital of Shanghai on Luding Road, Putuo District, by her family for her weekly donation of breast milk.

The Children's Hospital of Shanghai is the nation's first hospital that accepted frozen breast milk for its human milk bank, which was set up in 2016. 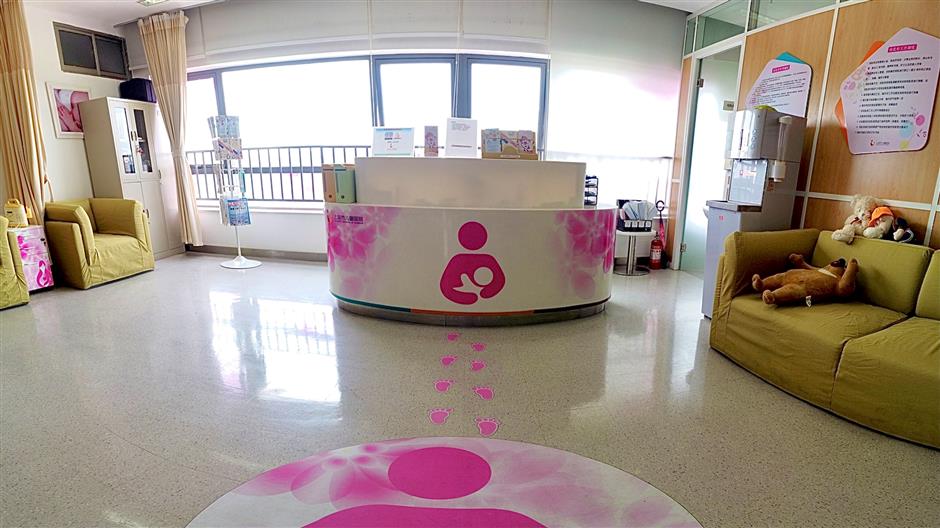 The Children's Hospital of Shanghai is the nation's first hospital that accepts frozen breast milk for its human milk bank.

Shi learned about this milk bank from a WeChat group of mothers after she delivered her second child.

Before that, she gave her extra milk to the other mothers in the chat group when she breastfed her first child.

"I started to donate breast milk in early August, one week after I gave birth to my second child," Shi told Shanghai Daily.

"I donated about 9 liters the first time. From the posters there, I knew that the milk will be supplied to infants under intensive care whose mothers lack milk."

As well as the breast milk, she has also donated her cord blood.

"I hope my breast milk can help more children in a timely manner," she said. 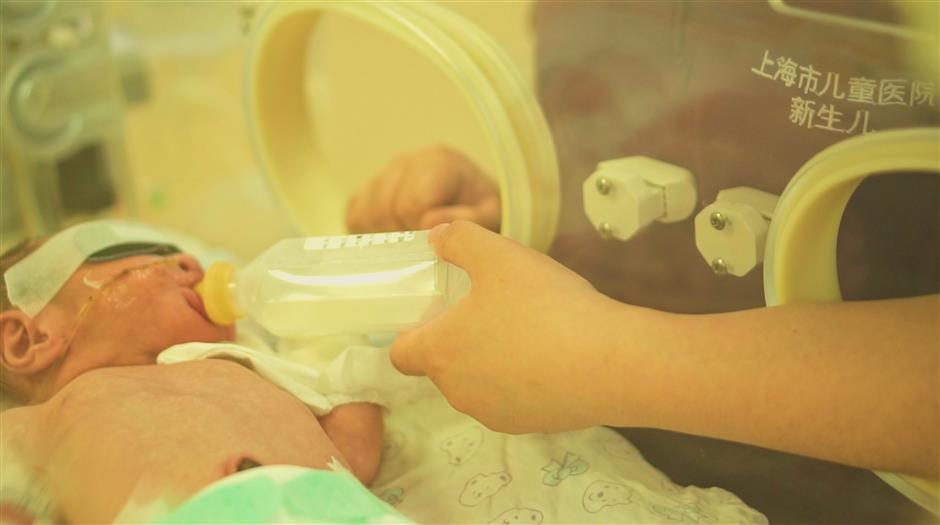 The breast milk is often given to weak newborn babies who have high risk of gastrointestinal complications.

The milk bank was introduced to the couple by her husband's colleague, and after she saw the WeChat public account posting, she decided to have a try.

"If I can help more babies in need and they can leave hospital in good health, I'll be very happy," she said.

Zhang Ting, director of the gastroenterology department at the hospital, who is responsible for the milk bank, added: "Due to various factors, some premature infants require fresh breast milk but it is not available. Then their doctors will make an application to the breast milk bank so that we can supply it to them."

Zhang explained that the breast milk is often given to weak newborn babies who have high risk of gastrointestinal complications. It is also a limited resource.

To ensure the milk is completely safe, the hospital tests the donor's blood as well as checking the milk, Zhang said. It is also pasteurized.

Before being used, the breast milk is put in a refrigerator set at 4 degrees Celsius to be unfrozen at the donation center of the Children's Hospital of Shanghai. 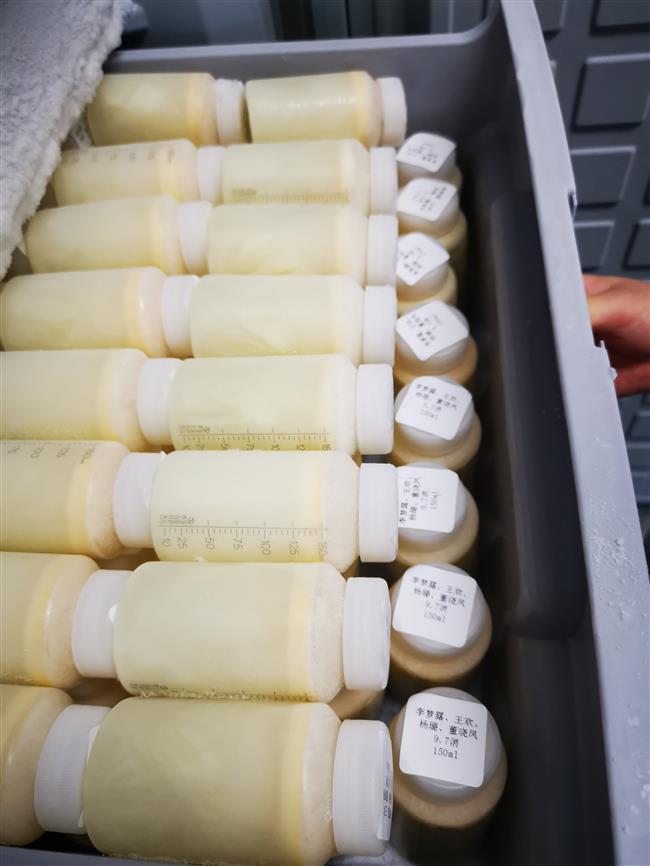 The bottles of breast milk are stored well after disinfection at the donation center of the Children's Hospital of Shanghai.

In future, the milk bank will work with enterprises and set donation sites, Zhang said.

They also hope that the bank can serve other regions in the Yangtze River Delta.

The two mothers suggested the milk bank promote itself to pregnant women at places like the maternity and childcare hospitals to let more mothers know about it.

The Children's Hospital of Fudan University set up its milk bank in 2017, after a three-year preparation, said Cao Yun, director of the neonatology department at the hospital.

Cao told Shanghai Daily that so far the donors of the milk bank are only mothers who delivered their babies at the hospital, whose health data is all recorded in their system.

Every morning, family members of these mothers send the breast milk to the hospital, which will be collected by a professional team of medics. Before being put in storage, the medics check its quality and tag it with bar code.

With information management, each bag of the breast milk is traceable, she said. 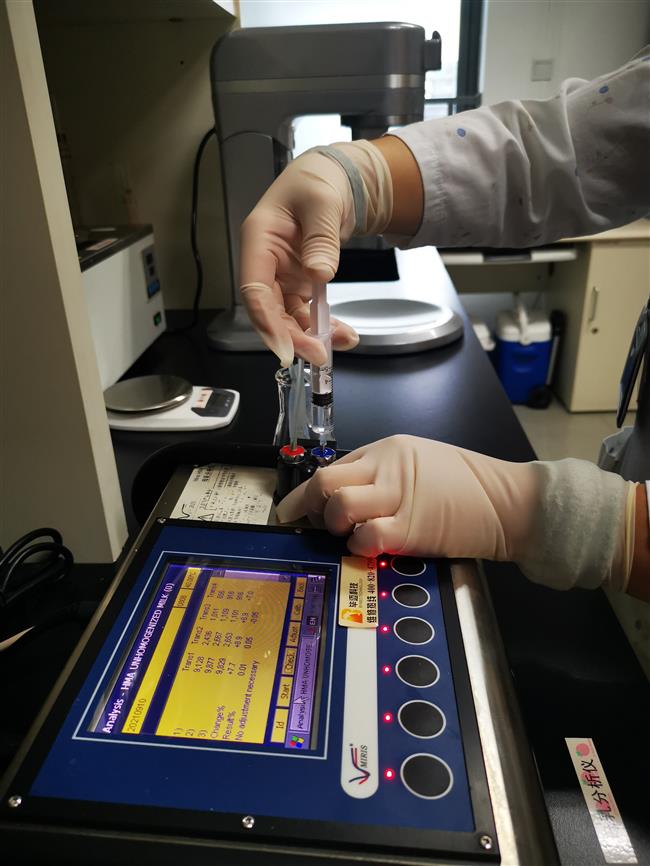 A medical worker analyzes the ingredients of the breast milk at the Children's Hospital of Shanghai.

To let families know how to donate breast milk, they have made both paper materials and video to teach them how to collect, store, sub package, disinfect the milk and safely carry it to the hospital.

She hopes the nation can release some guidelines on breast milk banks for more standardized operation.

As far as covert breast milk sales, Cao said she once stopped some parents from buying such milk.

"The sales can bring many risks," she said. "Breast milk is a rare source for feeding babies and should not be wasted. With some of our special young patients, it can help cure their diseases.

"More importantly, if the milk cannot be kept well, it will be unsafe for babies to take it. Once it's polluted or carrying bacteria or microorganisms, it will lead to bad impact on the babies."

Zhang agrees with her.

"Such milk is from an unknown source which can be polluted when being disinfected and transported," she said. "It's even not sure that what the buyers get is truly breast milk."