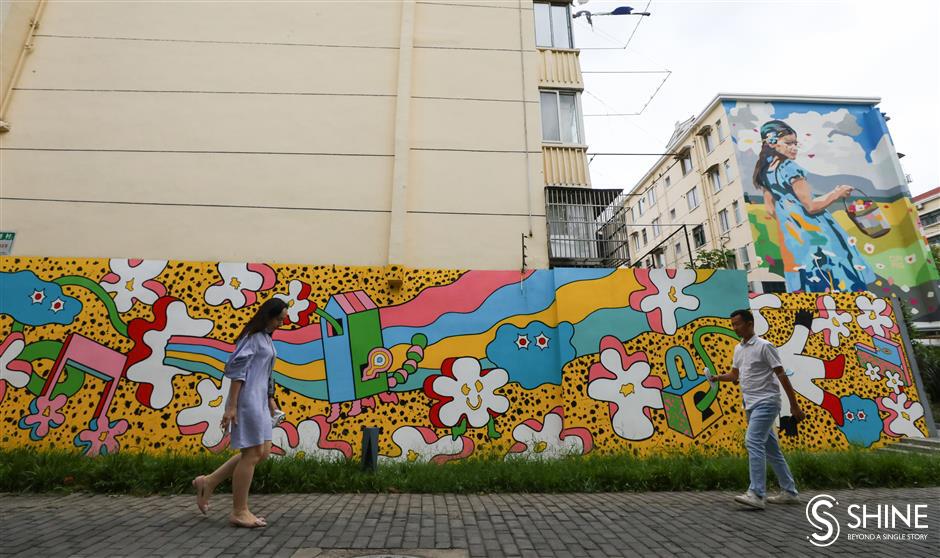 Chen Guoxing, 75, focused his lens during the summer on a wall in his neighborhood in Shanghai's Pudong New Area. For many years it had been just a plain, unattractive wall in decades-old Dongchang Xincun, standing inconspicuously in a corner and blending into the surroundings.

About two months ago, Chinese artist FELIX_SHAOZI created a giant mural on the wall, granting it a new lease on life and injecting vitality into the neighborhood. And Chen watched on.

At the intersection of Dongchang and Pucheng roads, the mural is an artwork of bright colors and imaginative details. It features white flowers, pink musical notes and blue clouds against the backdrop of a yellow base with black polka dots.

"Candy flower is one of my favorite imageries, representing the desire for life. It's my ultimate dream to live a carefree life in a world full of candy flowers," he said.

The mural perfectly harmonizes with the surroundings, especially with a wall painting created three years ago in an adjacent six-story residential building by American artist DAAS. Called "A Flower a Day," it features a girl in blue dress, surrounded by flowers.

As FELIX_SHAOZI radiated an infectious enthusiasm, hundreds of people, including local residents, workers and even passers-by joined him to finish the mural.

Maybe it was the artist's burst of exuberance, or the neighborhood's passionate involvement, or just some of the magic of art.

Resident Chen was inspired to record the whole process on his camera. The artwork took nearly 10 days to complete, and Chen took nearly 120 photos. 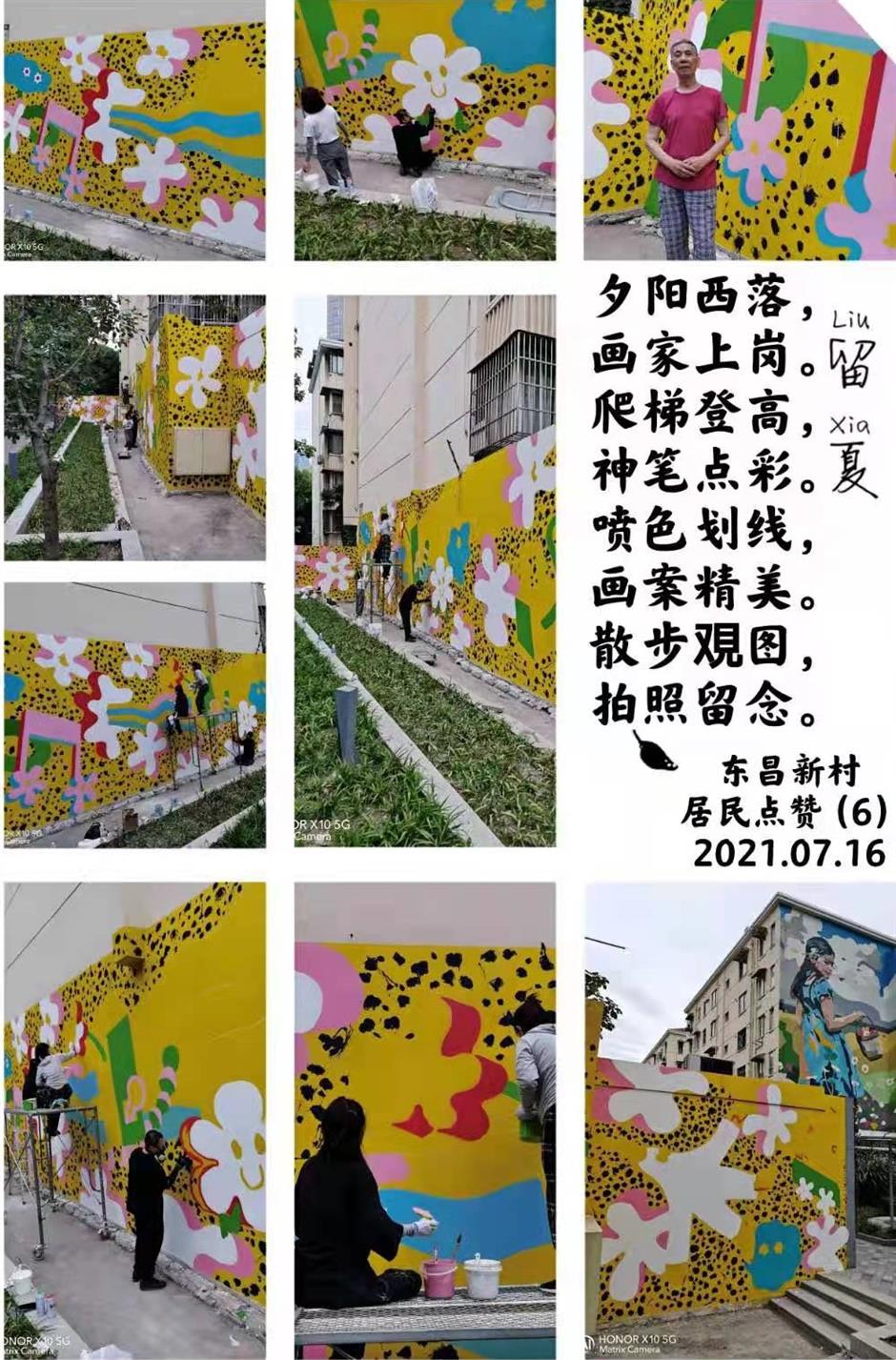 Chen Guoxing records the mural painting process with his camera.

"People were taking part in it, all hyped up. What's more, residents volunteered to provide water and maintain order," Chen said, pointing out that the mural has brought some cohesion to the neighborhood.

"Participants have deep feelings for the mural," admitted Cao Jun, Party secretary of the neighborhood. "As it was during summer vacation, children were enormously enthusiastic because they felt they made great contributions to the community."

Many people traveled there to pose for photos with it and posted them on social media. Strong feelings of pride well up in Chen every time he sees this.

"People are greeted by a blaze of colors as they pass through the Renmin Road Tunnel. To some extent, the mural is emblematic of over 30 years of reform and opening-up of Pudong," he said. "It helps create a lively and vigorous image of Lujiazui."

The mural is the latest work of "Color, Way of Love," an art project launched by Nippon Paint China to invite global artists to create wall paintings and enliven urban spaces.

Across Shanghai, it has created 37 murals, and six are in Lujiazui, mostly with themes to promote childcare and wildlife protection, according to Zhang Jiahua, former secretary general of Lujiazui Community Foundation that works with the company on the project in Lujiazui.

"We find the appropriate walls and talk to neighborhoods. Nippon Paint China finds artists and covers all expenses. It's a cost-effective way to freshen up old neighborhoods," he said. 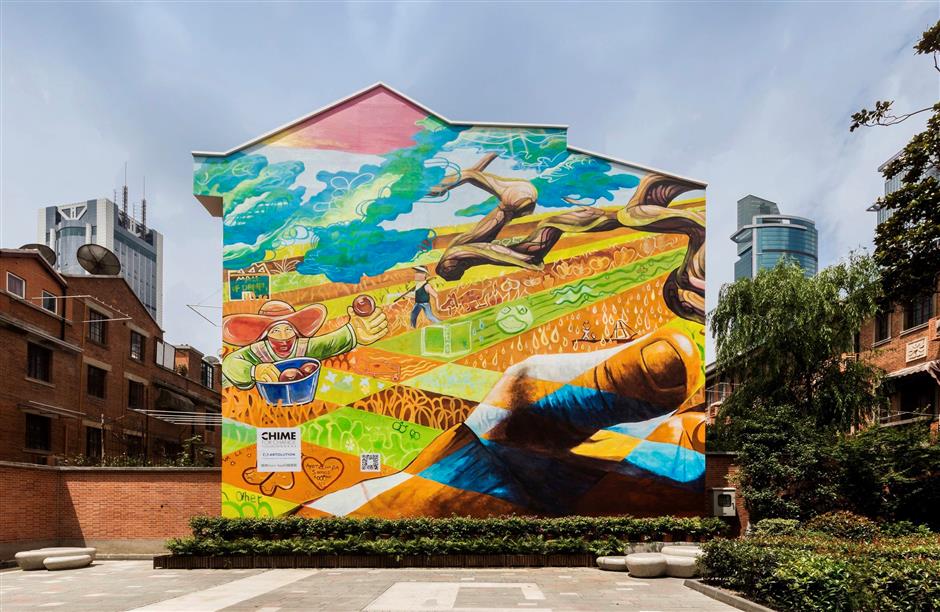 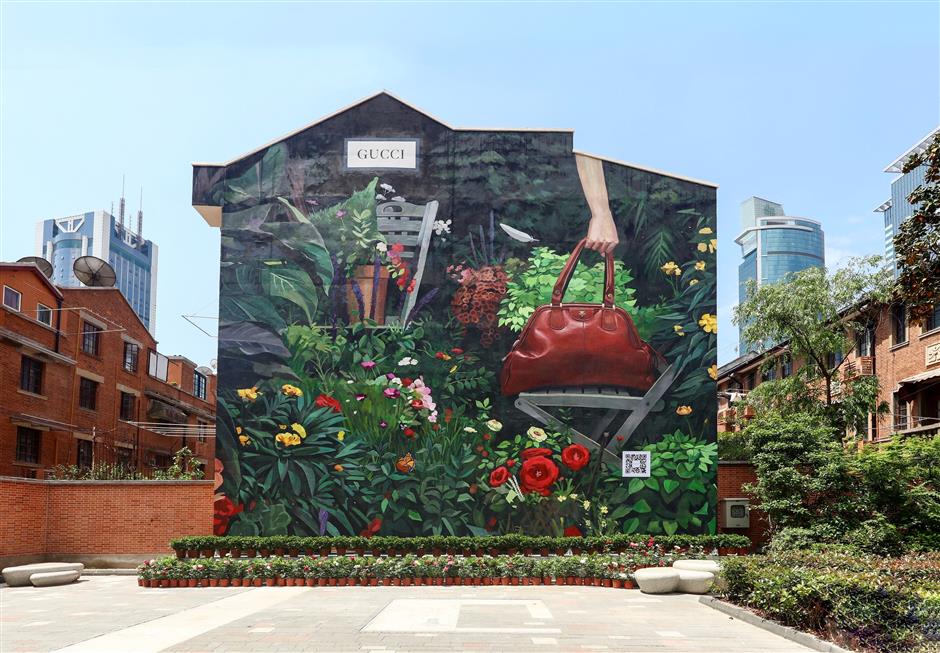 It is just one example of how businesses with deep pockets and artistic tastes add bounce to downtown concrete jungles.

The Xintiandi-style commercial complex sits next to the 89-year-old Jing'an Villa, a typical lane house neighborhood. The red brick walls there seemed a bit boring, so Gucci proposed the mural idea to Fengshengli.

The result is a subtle blend of art and advertising, bustling with poetic and nature imagery as well as lots of Chinese colors. And the wall paintings change from time to time to add novelty value.

According to Lin Xiaojue, director of Jing'an District Commission of Commerce, it's a perfect choice.

"Foreigners love our historical buildings because they feature a unique Shanghai style," she said.

"They want to find cultural similarities with their own countries, and art can provide a link. I think big cities in China still lack color, which symbolizes an open and energetic city. We need to embrace more color in our public spaces." 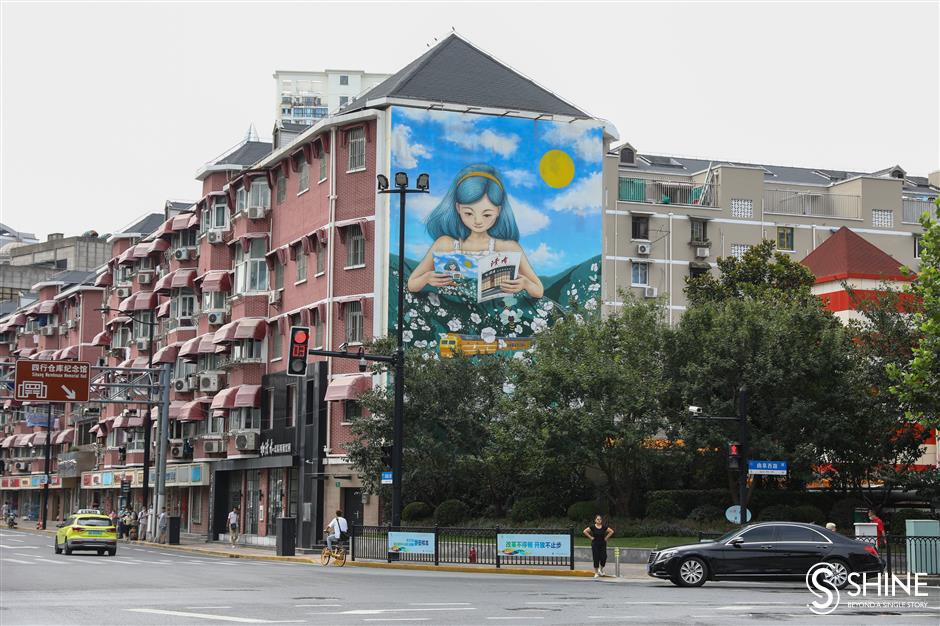 A wall painting at the intersection of Qufu Road and Xizang Road N.

In fact, Shanghai is never short of these kind of urban wall paintings. More and more grassroots officials have realized the role of art in the public space, and they are encouraging murals everywhere to give the neighborhood a more amiable environment. In Jing'an, it's common.

Two years ago, Beizhan Subdistrict joined hands with Duzhe (Reader) magazine, often hailed as the Chinese equivalent of The New Yorker, to build a community reading venue at the intersection of Qufu Road and Xizang Road N. Then a giant mural was created on the wall as a highlight.

It features a girl reading the magazine under blue sky, white clouds and bright sunshine. According to Li Jie, product manager of Duzhe, it reflects the girl's inner world.

It also features elements of Beizhan, where China's oldest railway station was erected, with cherry blossoms echoing a cherry tree standing right in front of the wall.

"When the cherries are in full blossom, the flowers in reality and on the wall set each other off. It's so beautiful, and many people especially come to take photos," Li said.

"I can't say whether it has had great impact on the community. But one thing, for sure, is that some people come to read just because they are attracted by the mural." 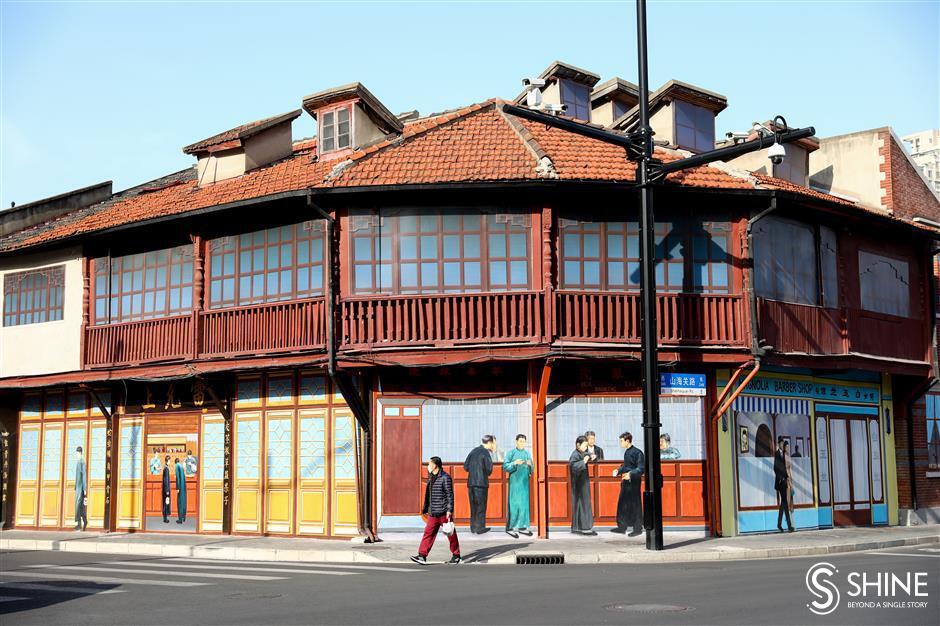 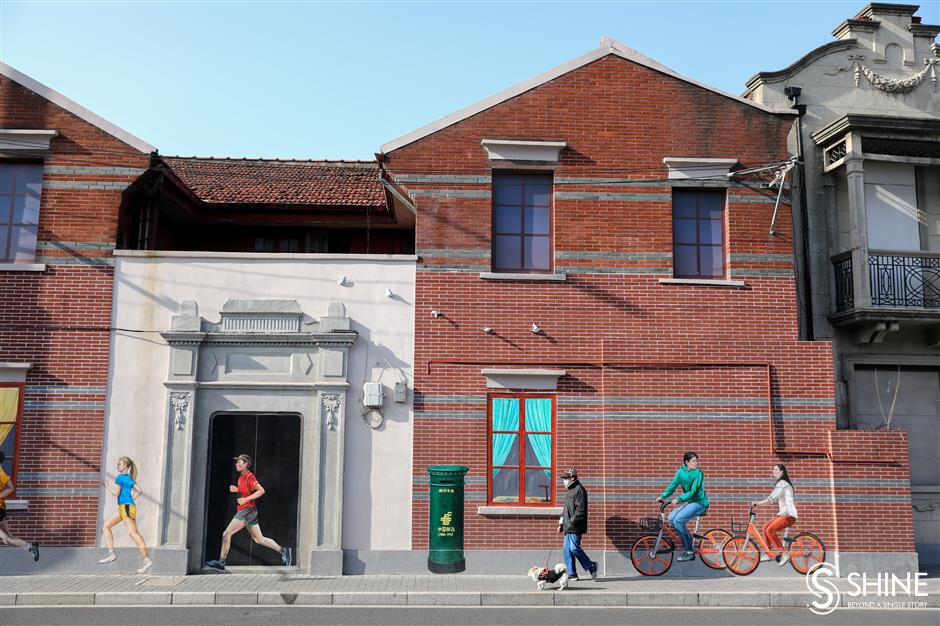 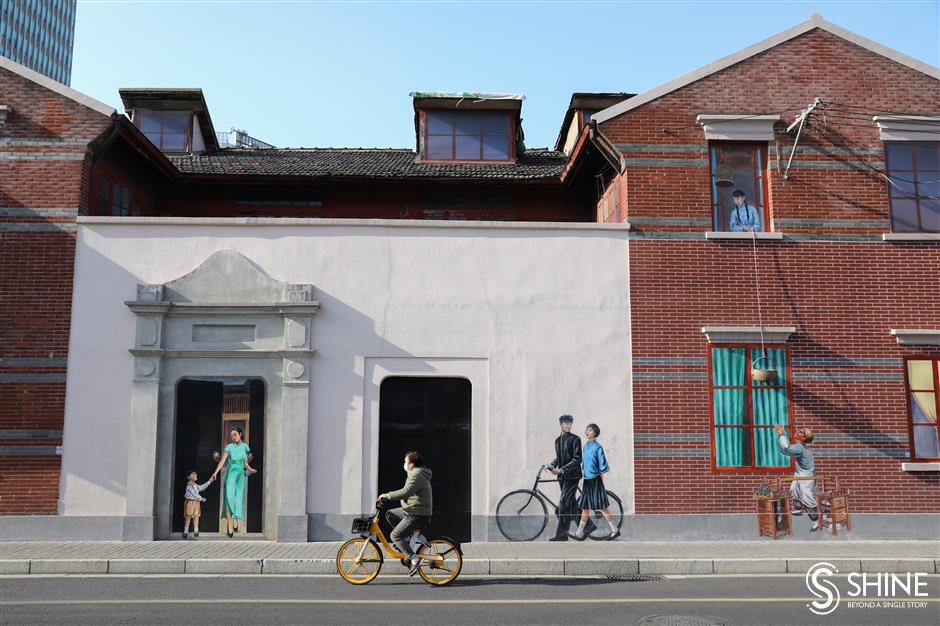 The pictures record daily life, past and present. A woman in qipao dress walks out of a shikumen (stone-gate) building as a rickshaw passes by. Children play old outdoor games in an alleyway while their mothers cook upstairs. Young people ride on shared bikes. A man buys a drink from a vending machine.

According to Shimen No. 2 Road Subdistrict, the paintings reflect the way people lived in the 1930s, the 1950s and even today.

Brick-and-wood shikumen buildings lining both sides of the road were built about a century ago. Relocation of many residents started in 2013, leaving dilapidated structures in their wake. When reinforcing the structures, the subdistrict came up with an idea to create murals.

"Though residents moved away, this plot of land is still alive," said Zhou Binhui, deputy director of the subdistrict's office. "I think it's a kind of micro-renovation. It cost little but makes big difference. It doesn't only improve the environment but also showcases local history and culture." 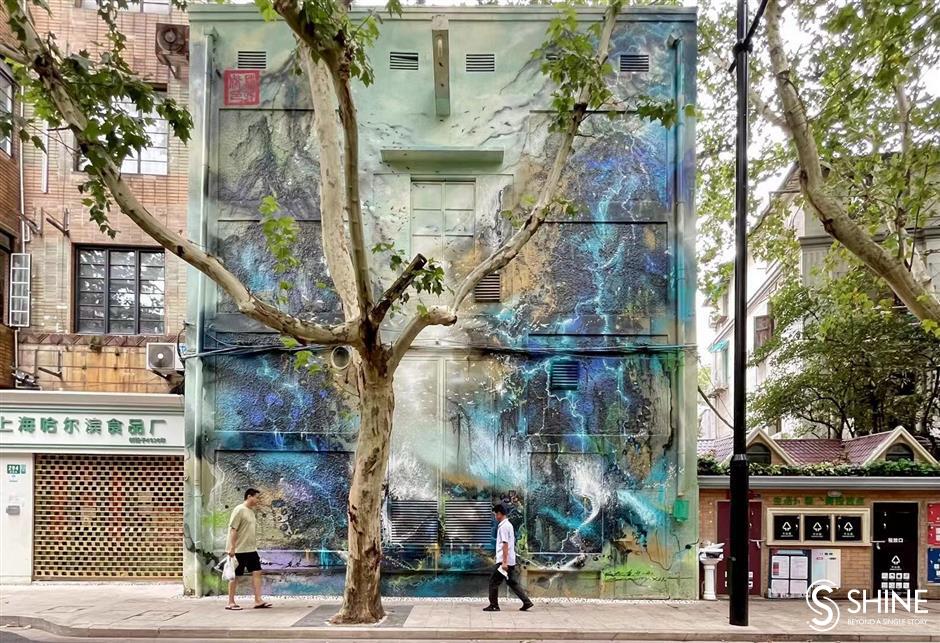 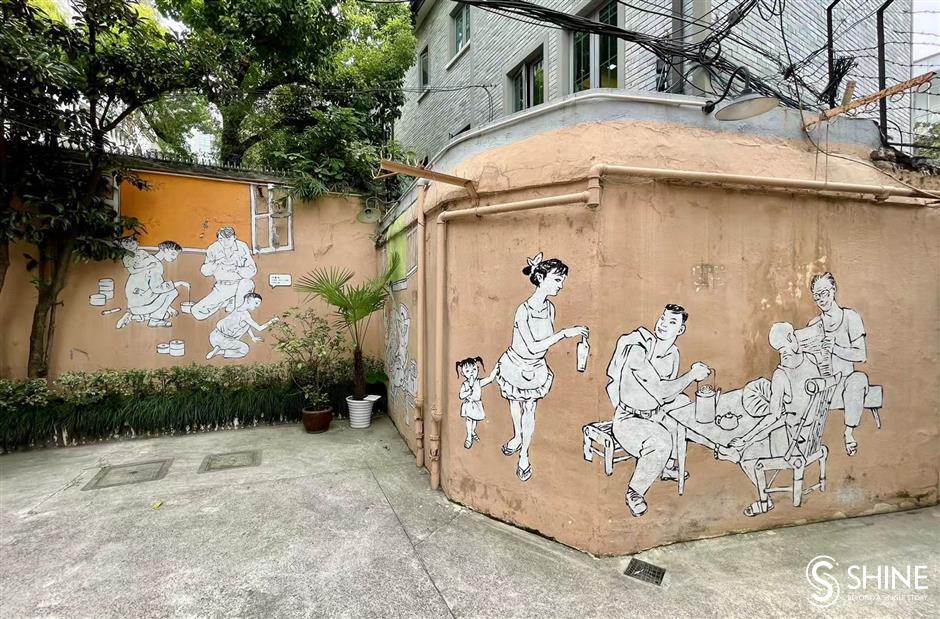 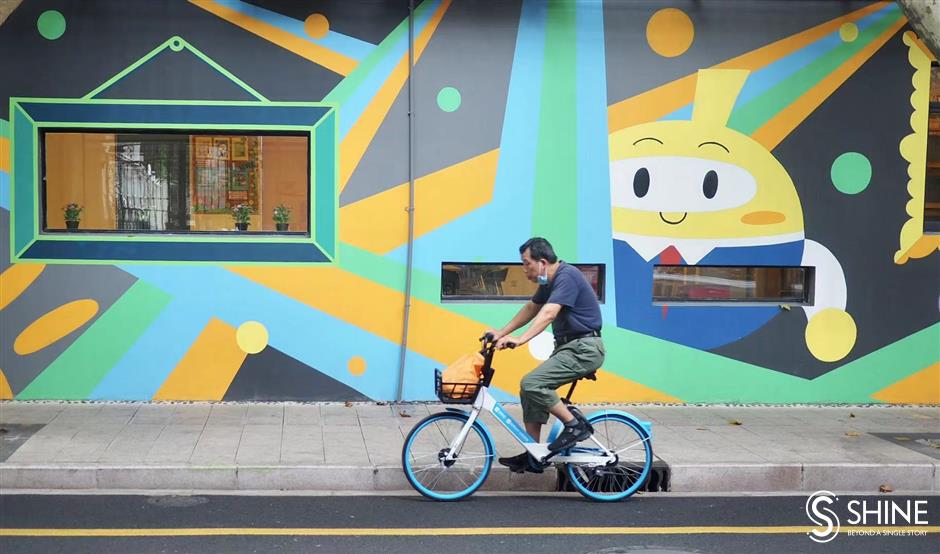 A man rides past a wall painting at Julu Road No. 1 Primary School.

Ruijin No. 2 Road Subdistrict in Huangpu District has a bigger picture. It hopes to dot the historical and stylish Nanchang Road with murals to create an outdoor fenceless art gallery.

In cooperation with the Museum of Contemporary Art Shanghai (MoCA), it has created a giant mural on the side wall of a roadside transformer substation at 292 Nanchang Road.

Using the wall as a canvas, Chinese artist Chen Yingjie made an abstract landscape painting to link to local trees, bricks and houses.

Also, cartoon figures appear to come to life on the wall of Julu Road No. 1 Primary School. Outside a fancy eatery at 256 Nanchang Road, a man and a woman sitting on a blue sofa are painted on the wall.

They remind people of a childhood when neighbors congregated outside to take in the chance of an evening breeze in summer and children skipped rubber bands in alleyways. 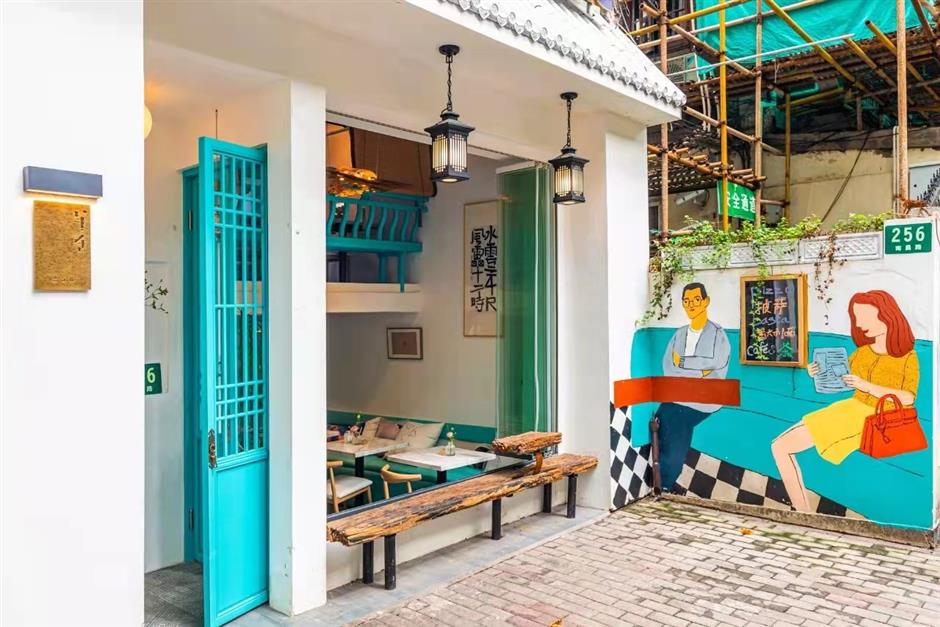 Wall painting outside a fancy eatery at 256 Nanchang Road 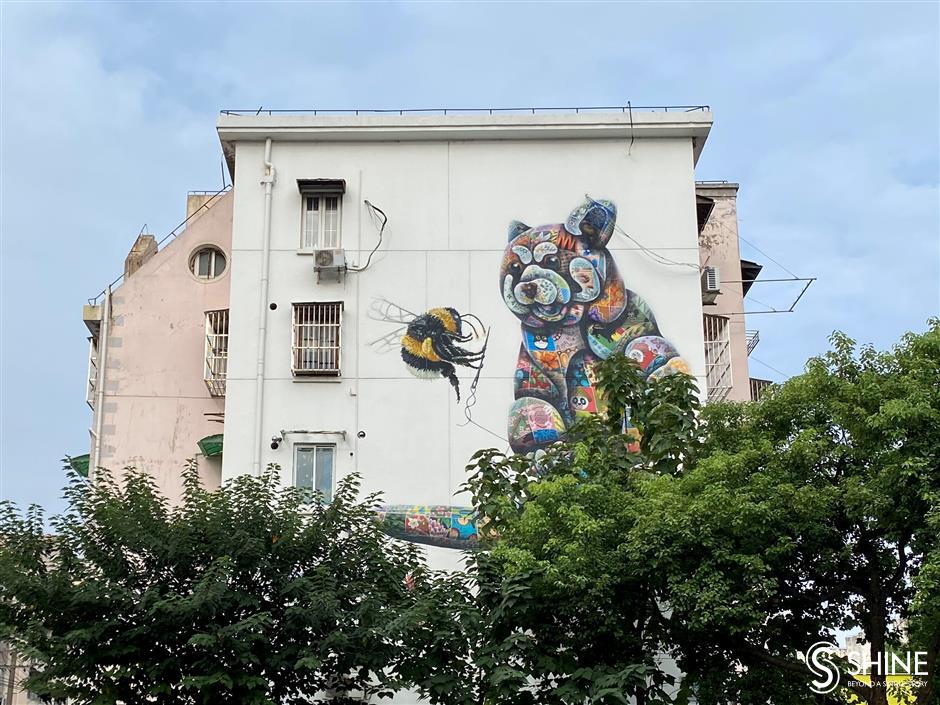 According to artist Louis Masai from Britain, artwork is inseparable from a local community, and it will have slow and indirect impact on local people.

He joined the "Color, Way of Love" project to draw a red panda in colorful clothing with global cultural elements, such as China's panda, dragon and yin-yang symbol, on the side wall of a residential building at 1177 Shangcheng Road in Pudong.

"Art is important in public spaces. It makes a place beautiful, and gives local people a glow of pride and grows a sense of happiness," he said.

"But remember, public art shouldn't serve as a band-aid to cover up ugly spaces. Local people's voices should be heard. It is people rather than a mural that can really improve the local environment. Only if local people become proud of their community can art play a part." 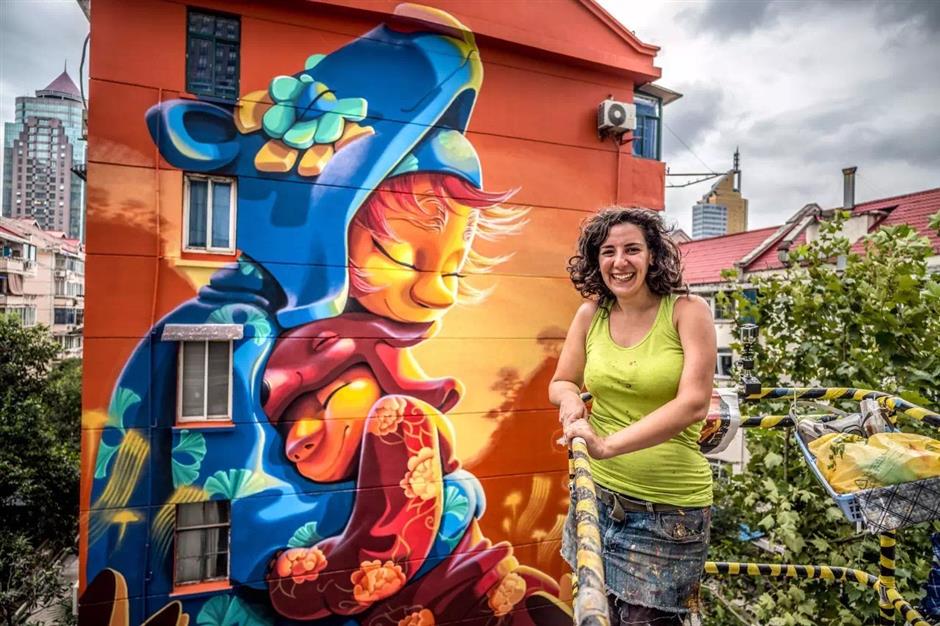 Animalitoland and her wall painting at 575 Pudong Road S.

Another public art practitioner, Animalitoland from Argentina, designed a mural depicting a bear cub in her mother's arms for the No. 3 Building of 575 Pudong Road S. in Pudong. She wanted to deliver a message of love and raise people's awareness of animal protection.

According to her, a mural is a special way of communication. Unlike traditional paintings or publications, it allows viewers to take part in the process of art being created.

She loves talking with local residents when drawing the mural to get a better understanding of the place, and herself as well.

She felt it was like entering a science-fiction movie when she first arrived in Shanghai, the skyscrapers a magnificent skyline and the streets full of activity.

"Passers-by told me that Lujiazui is a financial center. Here, people are busy with work and under great pressure," she said. "I hope they can forget their troubles and worries, and allow themselves the indulgence of art."

She was very impressed by a young man who told her that he was glad to have such a beautiful mural as it allowed him to unwind for a while. 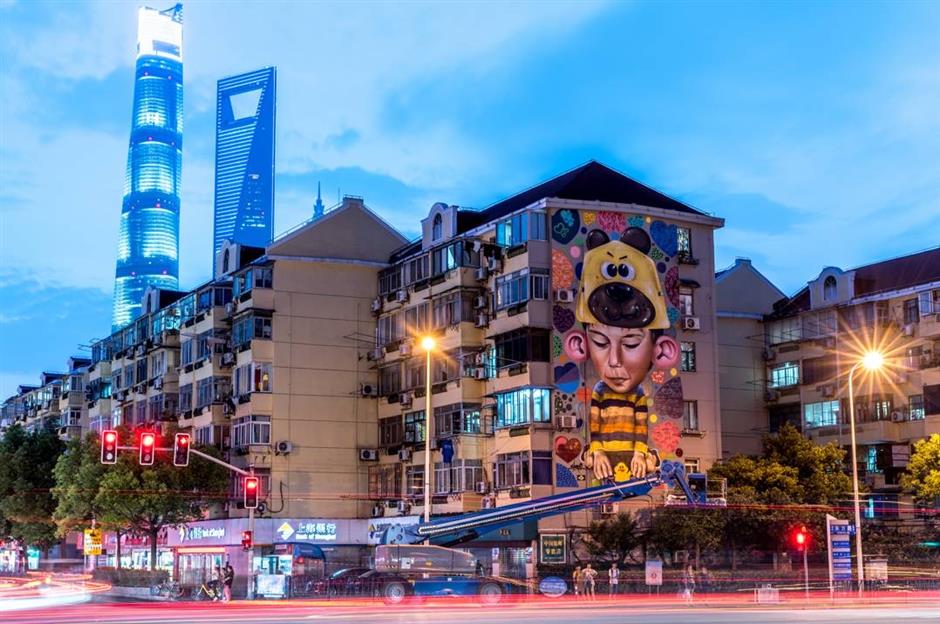 Another wall painting in the Lujiazui area by Sipros from Brazil

(Yan Jiayin contributed to this story.)