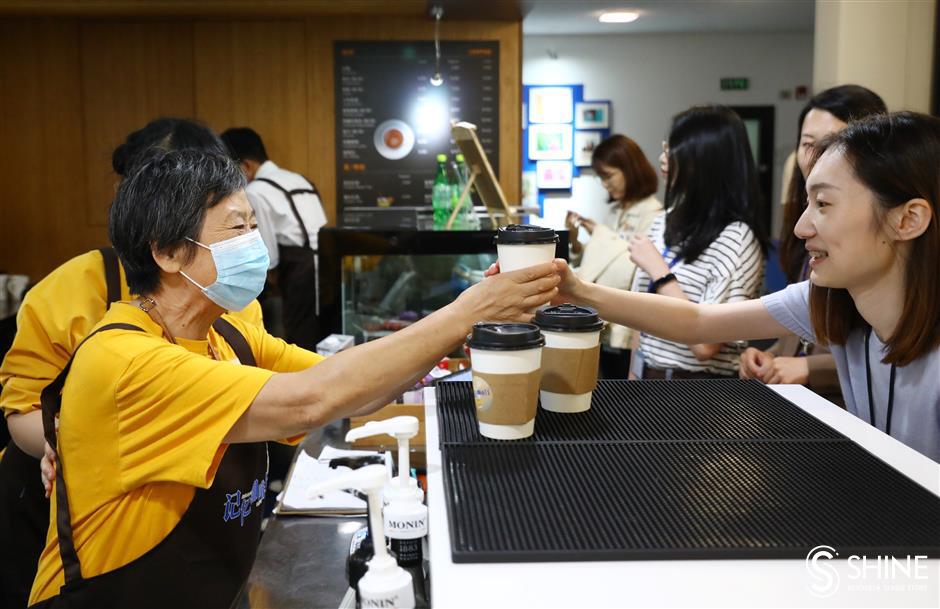 Grandma Ding (left) serves a cup of coffee to a customer. 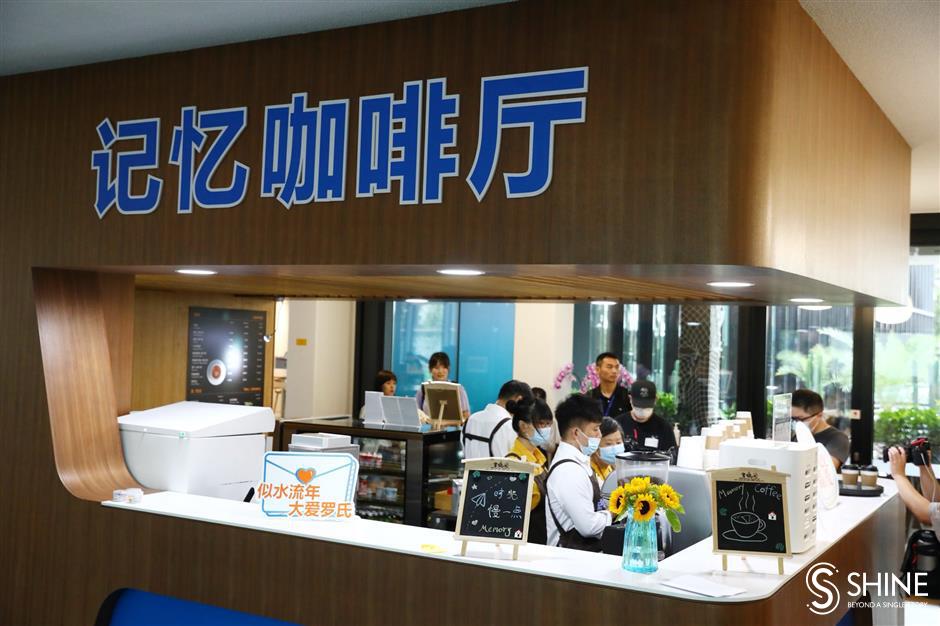 But it wins the unlimited patience and understanding of customers.

Memory Cafe where staffers are seniors with light cognitive impairment opened in the Zhangjiang area of Shanghai's Pudong New Area on Monday.

The small cafe located at the Chinese headquarters of Swiss pharmaceutical giant Roche features a warm, relaxed and homely atmosphere where people can doze, sit and read over a cup of coffee.

The aroma of coffee permeates the air, and every visitor is welcomed by the warm smile of senior servers.

In China, Alzheimer's disease occurs in 7 percent of people aged above 65 years old, and the rate soars to nearly 40 percent for people above 85.

About 50 million people suffer Alzheimer's globally, a figure expected to triple by 2050, according to the World Alzheimer's Report 2018.

In China, more than 10 million people live with Alzheimer's, and the number could rise to above 30 million by 2050.

Grandma Ding follows a young staffer at the cafe to make coffee.

"With early intervention, people with cognitive impairment can maintain a normal, independent and dignified life for a long time," said Guo.

However, the public's awareness about Alzheimer's is far from enough. People lack prevention awareness, doctors said, adding that most sufferers have already missed the best intervention period by the time they seek medical treatment.

"It requires the joint efforts of families and the whole of society to minimize the incidence rate of cognitive impairment among the elderly population from the root," Guo said.

At Memory Cafe, it is not uncommon that silver-haired senior servers bring the wrong coffee or forget orders, but their hardworking attitude and sincerity have won the hearts, respect and gratitude of all customers.

Grandma Ding, 76, has been serving as a volunteer at Memory Home in Pudong's Yangjing Subdistrict for half a year.

Decorated in bright colors, it's a place where people who have problems with their memory or difficulty concentrating on or learning new things bake cookies, enjoy coffee and make crafts by hand. They can also plant tomatoes and other vegetables in a small outdoor garden. 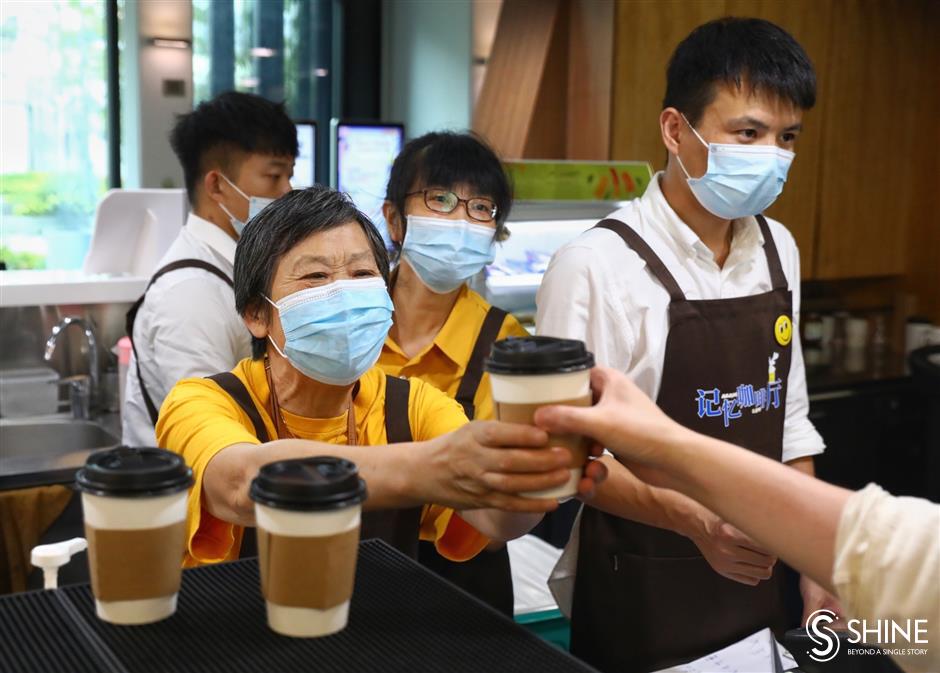 Memory Home provides a variety of activities to stimulate the brain, including music and art therapies suited to each individual. It has also set up several real-life scenarios, such as a bank and a wet market, to help those struggling to remember pin numbers or who have trouble in shops.

Age-related cognitive decline has become an increasing problem for local families and for Yangjing.

"Here, I can get in touch with society and communicate with young people, which is a very happy experience," said Ding, a retired university professor. She serves coffee at Memory Cafe as well.

"I learn how to make coffee, and I feel that my life is enriched," she said. "Many young people visit the cafe, and no customer complains if our service is slow."

"I feel warm and touched when receiving my coffee from Grandma Ding," said a customer surnamed Yang. "It cheers me up."

The cafe at Roche campus is inspired by "Yangjing Memory Cafe," which is a public welfare program operated by Shanghai Jinmei Elderly Care, a social organization dedicated to the care of senior citizens with cognitive disorders. The organization also operates the Memory Home.

"The original idea was to create a relaxed environment for seniors with cognitive impairment to stimulate their brain," said Fei Chao, director-general of Shanghai Jinmei Elderly Care. "A cafe is one of the most suitable means for its pleasant atmosphere."

"We found that many elderly residents with light cognitive disorder have difficulty in integrating into the society," said Fei.

"At the cafe, a good intervention environment is created, and they can make contributions to the society at the same time.

"Moreover, they can help raise the awareness of cognitive disorders among young people through their services, which helps create a friendly environment," said Fei. 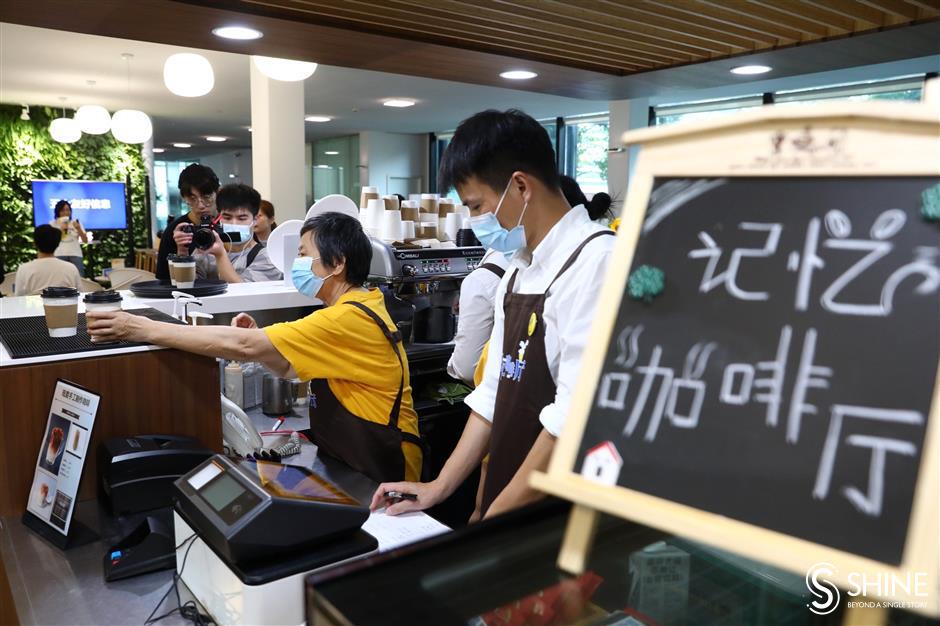 "We found that many seniors with cognitive disorders have emotional and psychological problems, and they don't have outlets to ease them," said Tang Bin, founder and director of Jian Ai Charity, which focuses on brain health and early intervention and prevention of cognitive disorders.

"It is important to help them find their self-value and build confidence. That's why we have been establishing and promoting the Body and Mind Training Center in communities," said Tang.

Roche Pharma China has also launched a memory health program that aims to encourage employees to pay attention to the memory and mental health of themselves and their family members.

"We hope our staff at Roche will take the initiative to learn about dementia and embrace the concept of managing memory health as early as possible," said Kevin Li, vice president of Medical Affairs and PHC, Roche Pharma China.

"It shows our commitment to creating a friendly environment for people with cognitive disorders," said Li. "We hope the event will serve as a window through which more people can learn about cognitive disorders, the challenges patients face, as well as how the efforts made by people from all walks of life can lead to unlimited possibilities."

Shanghai is creating a comprehensive elderly service network amid the growing aging trend and increasing demand for efficient, convenient and equitable senior-care services.

The city has 78 subdistricts and towns participating in a trial of friendly communities for seniors with cognitive disorders. The program was launched in 2019. Risk evaluation and early intervention are conducted in these locations, which have also introduced non-medical interventions such as brain-activation activities, music and art therapies based on seniors' cognitive-disorder levels and habits.

A three-year public welfare campaign to create a friendly environment for seniors with cognitive disorders was launched in the city early this year.

The campaign is comprised of four projects – early screening for 300,000 seniors, training for more than 3,000 nursing workers, creating 500 cognitive disorder virtual reality intelligent experience scenes, and 30 activities for those with cognitive disorders.

The Shanghai Civil Affairs Bureau estimates that about 300,000 locals suffer from dementia, and the figure is rising.

"This group of people needs society's care, and the city is actively trying to provide good care and nursing services," said Jiang Rui, deputy director of the bureau.

By the end of 2020, Shanghai had more than 4,500 hospital beds for seniors with cognitive disorders.