Herbal treatment for coronavirus goes to trial in the US 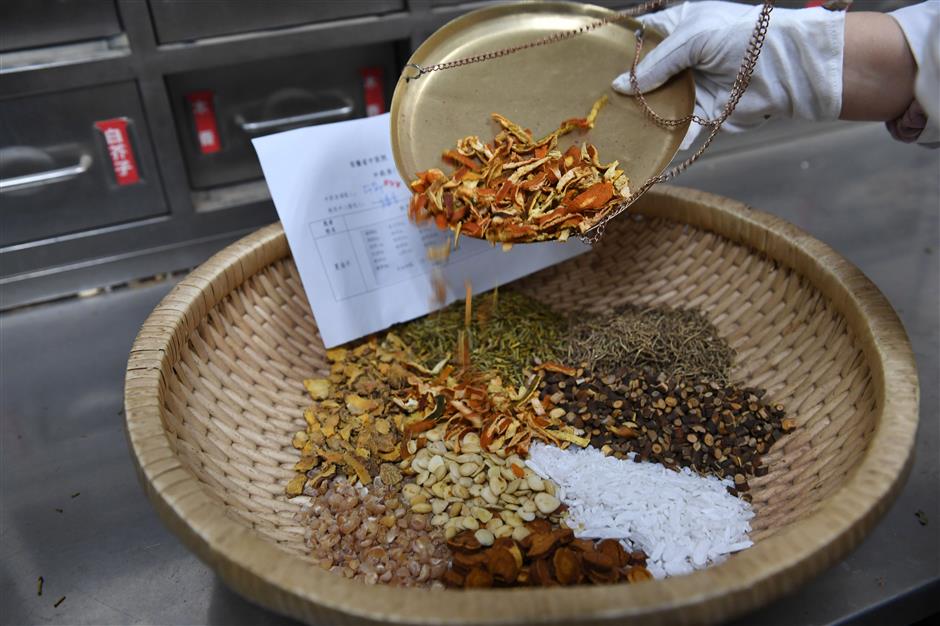 A Chinese herbal formula used to treat coronavirus patients in China is undergoing clinical trials in the US for possible approval for people with mild-to-moderate symptoms of the viral disease.

The US Food and Drug Administration approved a "double-blind randomized control" trial of the treatment in June. Such a trial, considered the gold standard of epidemiologic studies, is one where neither the participant nor the researcher knows whether the patient is receiving an experimental treatment or a placebo.

The two lead investigators for the trial are internal medicine specialist Dr Andrew Shubov at the University of California, Los Angeles, and Dr Gordon Saxe, a specialist in cancer and nutrition, at the university's San Diego campus.

The trial is currently recruiting volunteers.

In China, use of QFPD has been recommended in the government's official guidelines on treating coronavirus since early 2020 and is widely used around the country. It was used in a mobile hospital in Wuhan, the epicenter of the coronavirus outbreak in China last year, and more recently in the Delta variation outbreak in Nanjing in late July. 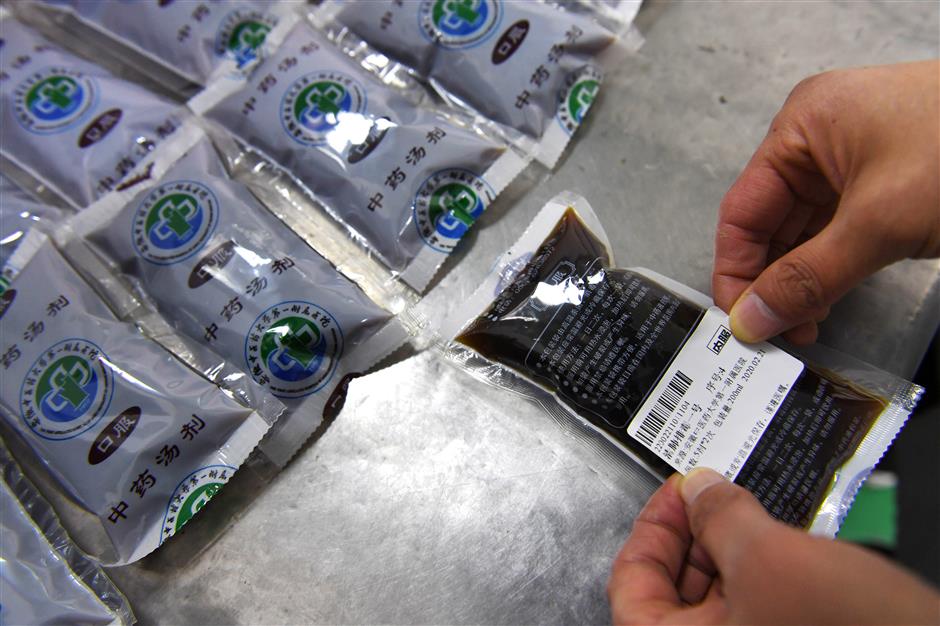 Based on the national diagnosis and treatment guideline for COVID-19 diseases, QFPD is the only prescription that is recommended for treating all COVID-19 patients ranging from mild to critical cases.

However, there hasn't been much discussion of the treatment in US medical circles.

Online platforms like Amazon show surging public demand for herbal therapeutics. A search of keywords like "lung cleanser" or "Chinese herb for COVID" brings up many products in capsule or tea form. However, a careful reading shows them to be mostly dietary supplement or wellness products.

In a rare departure from usual clinical trials, trials of QFPD in the US required approval from the Drug Enforcement Administration because the formula contains herbs highly regulated in the US, such as ma huang, or herba ephedrae. Ephedrae comes from a shrub. Among its many applications, the derivative ephedrine is used to prevent low blood pressure during spinal anesthesia.

In the US, ephedra supplements were banned from the over-the-counter mass market in the early 21st century due to what were deemed serious safety risks.

According to Shubov, who said he is highly concerned about misinformation related to COVID-19, it is unclear whether these products are true to the original formula.

"To translate Eastern medicine into the West for a US audience, you have to use the same language," he told Shanghai Daily in a recent Zoom interview. "The language spoken by the West is double-blind randomized control trials rather than anecdotes. These didn't exist when we were exploring what was available early last year, so we ended up doing it ourselves."

He added, "It is a long and expensive process to go for trials in the US, and Chinese medicine usually doesn't have the backing of large companies with millions of dollars to spend on it. It's even more difficult for us since we are not doing it for commercial use." 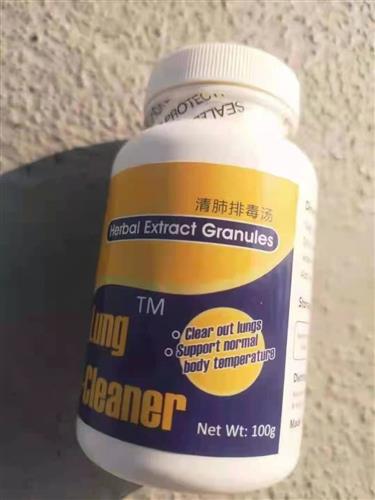 A search of keywords like "lung cleanser" or "Chinese herb for COVID" on online platforms like Amazon brings up many products in capsule or tea form.

Shubov, director of the inpatient East-West Medicine Consulting Service at UCLA, said he and his colleagues – mostly doctors in internal and family medicine – often work with Chinese medicines in their facility and are familiar with the challenges. They are seeking to help integrate Chinese traditional medicine into the health care system in the US.

"Chinese medicine has a strong, long and rich history dealing with epidemics, but for various reasons, there aren't many discussions about Chinese medicine in the Western world," said Shubov.

"Our intention is to demonstrate the value of herbal Chinese medicine during the coronavirus pandemic and hopefully shine light onto a new style of treatment that the Western world was not aware of," he explained.

In general, Chinese traditional medicine, which has a history dating back more than 2,000 years, is often considered as an alternative rather than integrated treatment for diseases like chronic pain. When it is used in the West, treatment such as acupuncture is much preferred over herbal medicine.

Shanghai Daily searched for US trials of Chinese herbal medicine on the website cliniclatrials.gov. Only two for coronavirus showed up, along with about 10 for other diseases. Most trials relate to herbal medicine not categorized as drugs but rather as dietary supplements.

Shubov and his colleagues discovered QFPD from the Chinese government's official guidelines, which are available in English online. 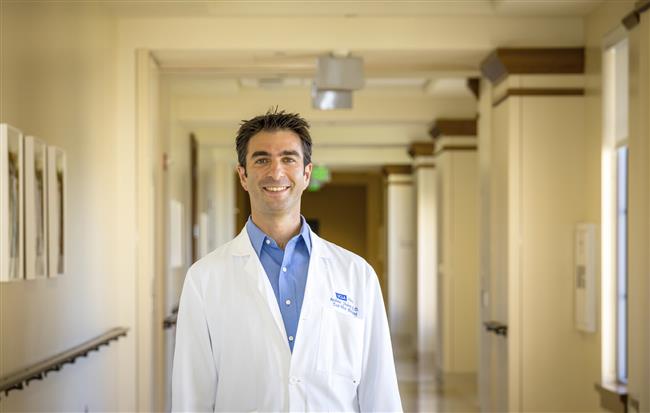 The treatment in China is administered in a broth form. A capsule form was approved for broad use last March by China's National Medical Products Administration. Two other herbal capsules for treatment of COVID were also approved at the same time.

QFPD integrates four classical prescriptions into a "one-size-fits-all" treatment for patients suffering mild to moderate symptoms. According to Chinese media reports, it was administered in broth form during the recent outbreak of the Delta variant in the city of Nanjing.

All patients over 18 at the municipal public health center were given TCM treatment every day. No deaths occurred.

Lack of high-quality clinical trial results may be one reason why many in the West have yet to be convinced of the efficacy of Chinese medicine. Unexpected challenges, like approval from drug enforcement authorities, are another.

In Shubov's case, sourcing for herbs that fulfill all FDA requirements took a long time. Research on herb-herb interactions and herb-drug interactions was also required.

And with all that, turning the original 21-herb broth formula into capsules ended up requiring a large quantity of pills – equivalent of 60 capsules a day. That forced the researchers to explore new technologies and extend the intake period.

The team wanted to stay as true to the original formula as possible, and substituted only one highly regulated herb. Hence, the result was called "modified QFPD."

The Phase I trial aims to establish the safety and feasibility of the use of modified QFPD versus a placebo in 66 subjects. A Chinese medicine specialist was added to the team to monitor any side effects that might arise.

How did QFPD come about?

According to a July 2020 report on QFPD on Xinhuanet, practitioners of traditional medicine believed that dampness or high humidity in the body is the root cause of many diseases, including respiratory issues.

They noted that the city of Wuhan was warm and rainy in the leadup to the outbreak. Coronavirus patients there showed mucus coating on their tongues, a sign of dampness and turbidity in traditional Chinese medicine.

Practitioners were quoted as saying that the goal of traditional medicine was not to kill the virus but to drive it away by restoring internal balance and boosting the body's defenses.

In formulating a treatment, they chose herbs that protect multiple organs and boost the body's immune system.

The report cited anecdotal evidence. It said a patient in Hebei emerged from fever and had his white blood cell count return to normal after taking QFPD once. In Shanxi Province, testing of some coronavirus patients turned negative after they were administered QFPD for three days.

According to the National Administration of Traditional Chinese Medicine, 1,337 COVID-19 patients were enrolled in China's QFPD clinical treatment program as of May 20, 2020, and 99 percent were discharged, Xinhuanet said.