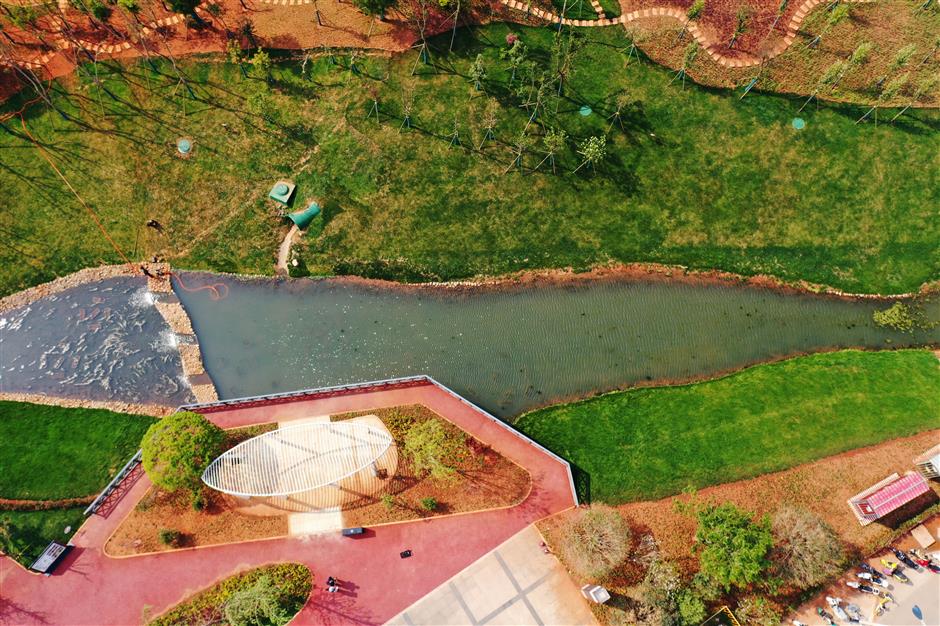 The urban wetland in Kunming's Chenjiaying Forked Gully purifies the reclaimed water from Ziwei Village Reservoir and serves as a "green barrier" to reduce pollution.

The 15th meeting of the Conference of the Parties to the Convention on Biological Diversity (COP15) is being held in Kunming, where "sponge city" construction has helped ensure biodiversity – a concept replicated in other Chinese cities, especially Shanghai.

Kunming, the capital of southwest China's Yunnan Province, used to be a "City of Water" with its fertile Dianchi Lake and dense network of rivers, which were called the city's "blood vessels", in old times.

At that time, Kunming was like any of the water towns in Jiangnan, regions in the lower reaches of the Yangtze River. People in Kunming used boats for traveling throughout the city.

However, later, due to Dianchi Lake's decreasing water level, it ceded to the land and the Xima River, which became narrower and shallower, finally turning into an underground river.

But now, with the Kunming government's infrastructural efforts, more and more water appears in the city with rainwater collected and utilized to relieve the city's water supply burden.

Kunming's work collecting and utilizing rainwater can be traced back to 2009, while its "sponge city" construction project officially began in 2016.

"It's an inevitable choice for Kunming to build itself a 'sponge city'," Xiong Guozhi, deputy head of the Kunming Water Resources Bureau, told Shanghai Daily. "Kunming is one of the cities in China that is most frequently short of water. The per capita water resources here are under 200 steres, which is far less than the national average. Since our urban population is large, the city has a great water supply burden." 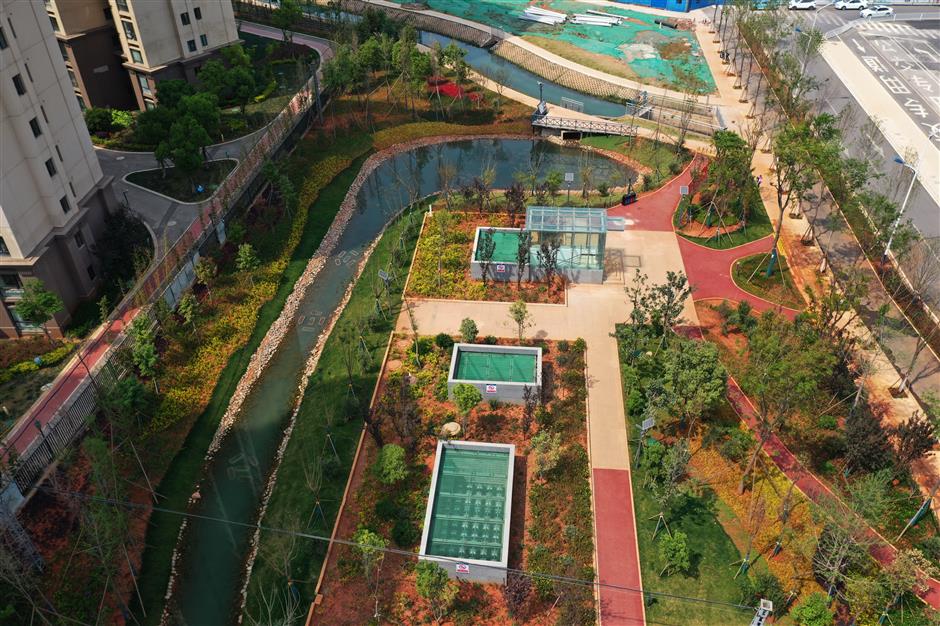 The "urban wetland" with a "sponge park" and a curving artificial creek of some 800 meters.

Xiong said through the "sponge city" construction project, the use of rainwater can bring relief to the whole city's water resource availability and help with preventing flooding.

The project is referred to as the "sponge city" project in reference to the goal of increasing the city's ability to retain water and maintain ample water resources in the future.

So far, Kunming has almost eliminated dirty and odorous water areas, according to Xiong. A total of 621 buildings and residential communities, 181 roads, and 71 parks and green spaces have met the standards of the "sponge city" project.

In Kunming's Wuhua District, there are two "urban wetland" areas that connect rivers and introduce the "sponge city" concept to their water and greenery.

At the area south of Jinchuan Road at the Chenjiaying Forked Gully, residents were seen wandering in an "urban wetland" with a "sponge park" and a winding artificial creek about 800 meters in length.

As a spillway of the Ziwei Village Reservoir, which is located in the mountainous area upstream, the Chenjiaying Forked Gully has to handle the rain drainage in its neighboring places. 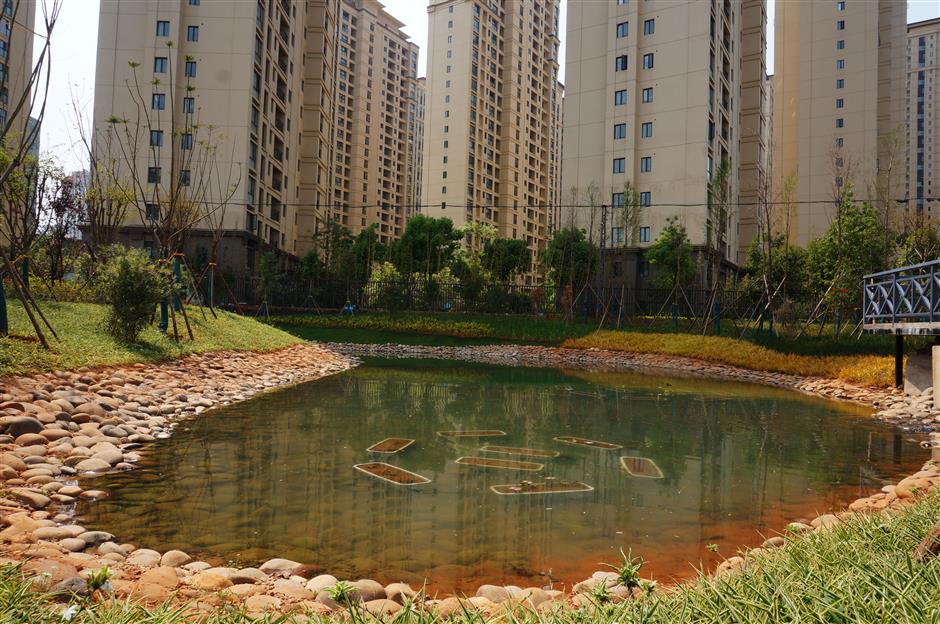 With the slope, the trees, bushes, and grasses can be connected to the body of water, which allows small creatures in the water to climb.

To solve problems like heavy pollution, poor landscape design, and frequent flooding, the district water resource bureau decided to set up a "wetland" there to better maintain the environment and ecology in the area.

The bureau had built a string of "rain gardens" there with a total area of nearly 19,000 square meters. Meanwhile, they planted various flowers which can bloom in different seasons, such as magnolias, jacarandas, and cherry blossoms. They also set up facilities like waterfront walking lanes, a boardwalk above the creek, and plazas for people to relax.

Zhang Shihua, director of the bureau, said instead of a straight artificial creek with lower cost and workload, they built a curving eco-friendly one that is sloped so that it can allow aquatic plants and animals to grow better.

"With the slope, the trees, bushes, and grasses can be connected into the body of water, which allows small creatures in the water to climb," said Zhang.

The wetland also purifies the reclaimed water from the reservoir and serves as a "green barrier" to reduce pollution. Zhang mentioned that two water quality tests showed that after being filtrated and precipitated several times, the level of water quality improved greatly.

"The chemical oxygen demand dropped by 23.4 percent, ammonia nitrogen content reduced by 53.5 percent, phosphorus content declined by 61.6 percent, and that of the anionic surfactant fell by 50.8 percent."

A belt of lotus flowers can be seen in the creek under the Puji Flyover urban wetland in summer.

Zhang said that most of the wetlands in Kunming are large lakeside ones. "What we did with the urban wetlands and water ecology restoration program is like scrambling for urbanization space," he said. "Previously, construction was mainly for residential complexes and roads, and roadside green areas were just the landscape for people to look at. But now we let people come in and experience and interact with the ecology."

The other wetland is under the Puji Flyover with three ecological ponds placed in the green space with a total area of 3,500 square meters.

Southwest of Cuihu Park, a belt-shaped park was built along the Xima River, which previously receded and became an underground river due to urbanization. The river was returned to the surface using a water restoration system.

According to Zhang Yun, a guide at Cuihu Park, since functions like water circulation and self-purification don't work very well in the 220-meter-long Xima River, they have taken measures to prevent the water from undergoing eutrophication, which means that the pollution from such sources as sewage or fertilized fields causes water to become high in organic and mineral nutrients.

Employees formed an "underwater forest" system by planting more aquatic plants to create an ecological system. Then they set a submerged pump in the lower part of the river to pump water and release it in the upper portion to circulate. 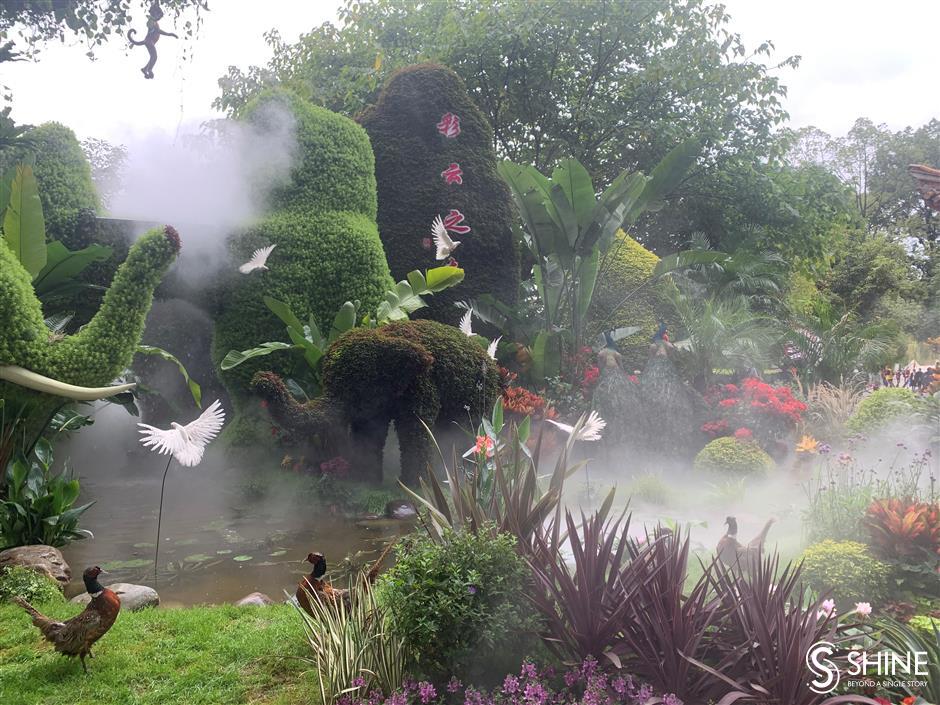 Near Cuihu Park are five sets of mosaiculture, a horticultural art of creating topiary-like sculptures with bedding plants.

Near Cuihu Park, there are five sets of mosaiculture, referring to the horticultural art of creating giant topiary-like sculptures with bedding plants.

Wen Cheng, an expert with the Species Survival Commission of the International Union for Conservation of Nature, told Shanghai Daily that due to its geographical location Kunming often suffers some flooding in the rainy season. "And on the other side, the plain with seasonal flooding is also has the richest ecosystem and biodiversity. However, under the traditional urban development model, urban development and the ecosystem separate in space and cause the suspension of eco-hydrological progress."