'Beaver Princess' lives like a Disney character surrounded by wildlife

Before heading to Kunming, Yunnan Province, and stepping on stage, Chu Wenwen practiced her speech for this week's UN Biodiversity Conference opening plenary many times. She did so in front of the lairs of beavers which she has protected for nearly four years.

This species of beaver (officially the Sino-Mongolian beaver Castor fiber birulai) lives in the Ulungur watershed in China and Mongolia. In China, their only habitat is in northwestern Xinjiang Uygur Autonomous Region where Chu, 27, lives. 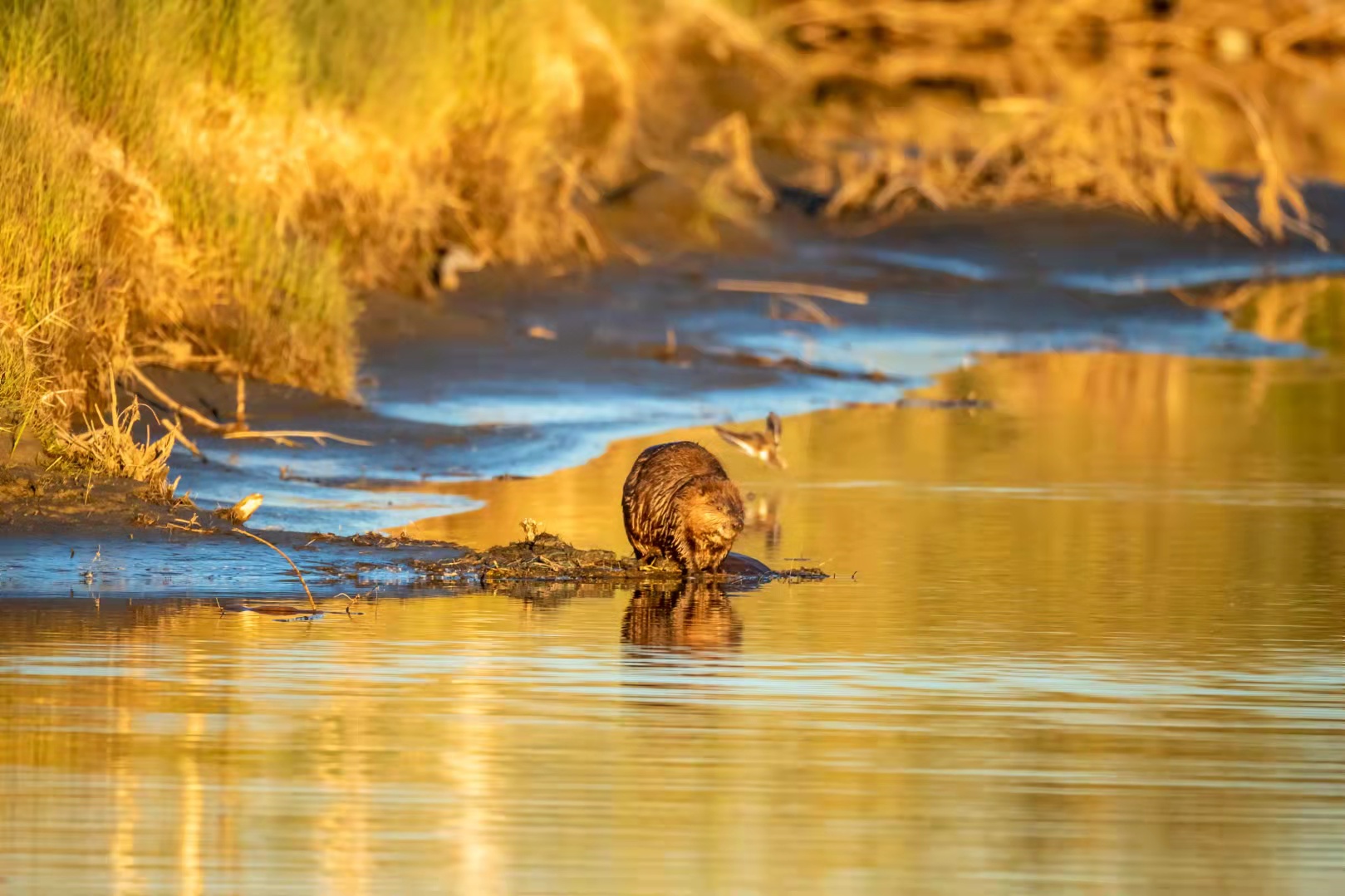 After graduating from Beijing Forestry University in 2017, Chu returned home the following year and initiated the "Beavers' Canteen" program which calls on people to donate their "money for snacks" to help plant a species of shrub that is an important food resource for the beaver.

"During the past four years, there have been more than 1 million post-1990s people joining our natural conservation campaign for the Altai Mountains in Xinjiang. We got together through Douyin (Chinese version of TikTok) and planted 410,000 saplings of that shrub," she said proudly at the meeting.

"We made 190 households of herdsmen be natural conservation 'patrol guards' and established the nation's first professional wild animal rescue center in the Altai Mountains," she added. "We've done great work. We helped to raise the number of beaver lairs from 162 to 190, increasing this first-class state-protected animal population by 20 percent."

Known as the "Beaver Princess," Chu lives a life which is similar to a Disney character, surrounded and liked by wild animals. 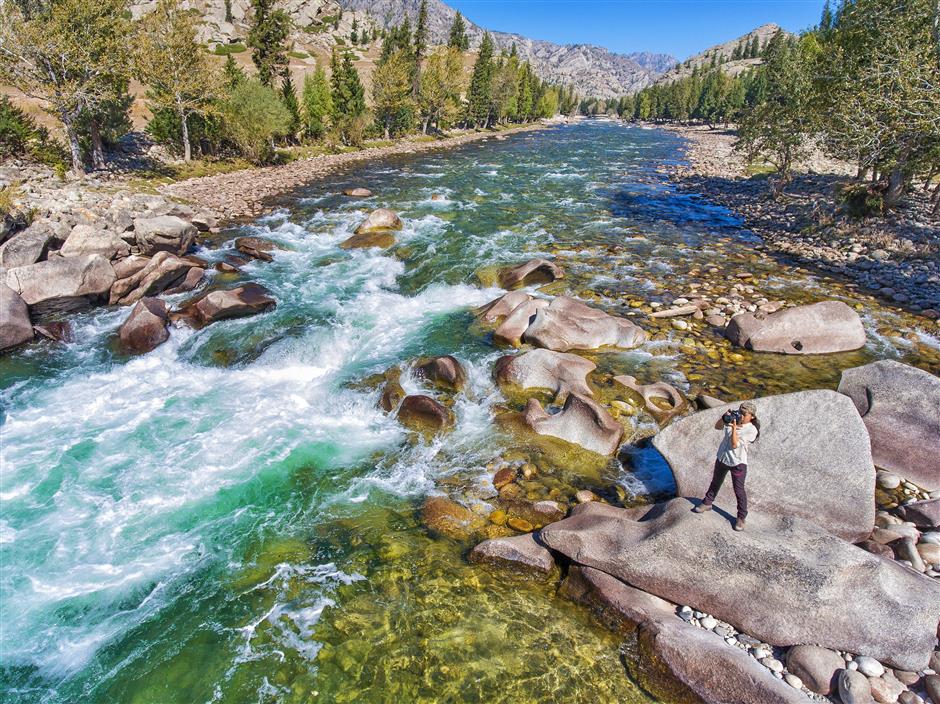 Chu takes her first photo in the wildness while she was at middle school.

Chu's childhood was different from her peers. She was introduced to the wild at the age of 2 by her father who is an animal conservationist and often needed to do investigations and researches. So when the other children were reciting ancient Chinese poems, mathematical formulas and English alphabet, Chu was working hard to remember the names of different animals and plants.

When she was 7 years old, her father gave her a single lens reflex camera as a gift to observe and record the life of wild animals. She developed a love for the creatures and how humans could coexist harmoniously with them.

So instead of being a white-collar worker in Beijing after graduation, she decided to return home and follow her father's footsteps.

In her hometown of Altay, there are 466 species of wild animals and 74 state-protected ones living in the surrounding 110,000 square kilometers.

In 2018, she founded the Altai Natural Conservation Association which is dedicated to animal protection. 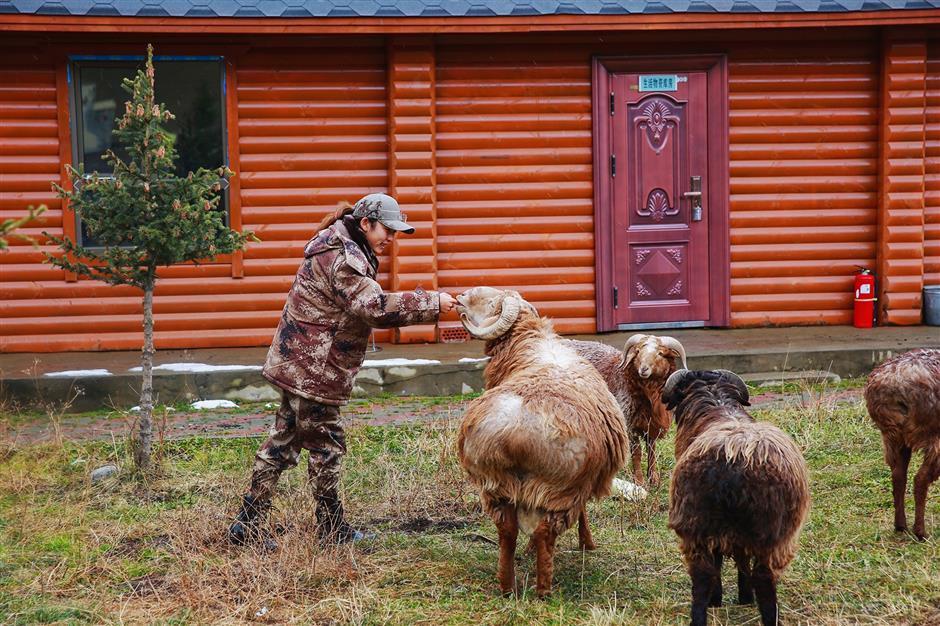 Chu takes care of a flock of sheep.

The first public participation project she initiated was for the beaver.

At the rescue center, there are dozens of animal species, including both birds of prey and beasts. "We took this beaver as a priority because it's listed as a first-class state-protected animal and was greatly endangered," Chu told Shanghai Daily.

This animal, which feeds on the shrub that grows near the rivers, has a strong sense of territory and won't leave their own surroundings.

So if people destroy the river and the water levels decline, the beavers' living environment will be destroyed and they will no longer survive.

"The beavers, which can build dams, are dubbed as 'engineers' in the animal kingdom. Their dams can change water levels, gather shoals of fish, attract birds to nest and bring insects and small mammals," Chu explained. "So every beaver's dam can provide a new ecosystem for wild animals and lift the biodiversity levels in the area."

Chu said it's common to see the beavers injured or dead after a fight in the Ulungur River. "They have very strict requirements about habitats and only choose for their home an area with abundant food resources," said Chu. "However, the availability of the shrub keeps decreasing. The lack of food and habitat is the major cause impacting the beavers' reproduction." 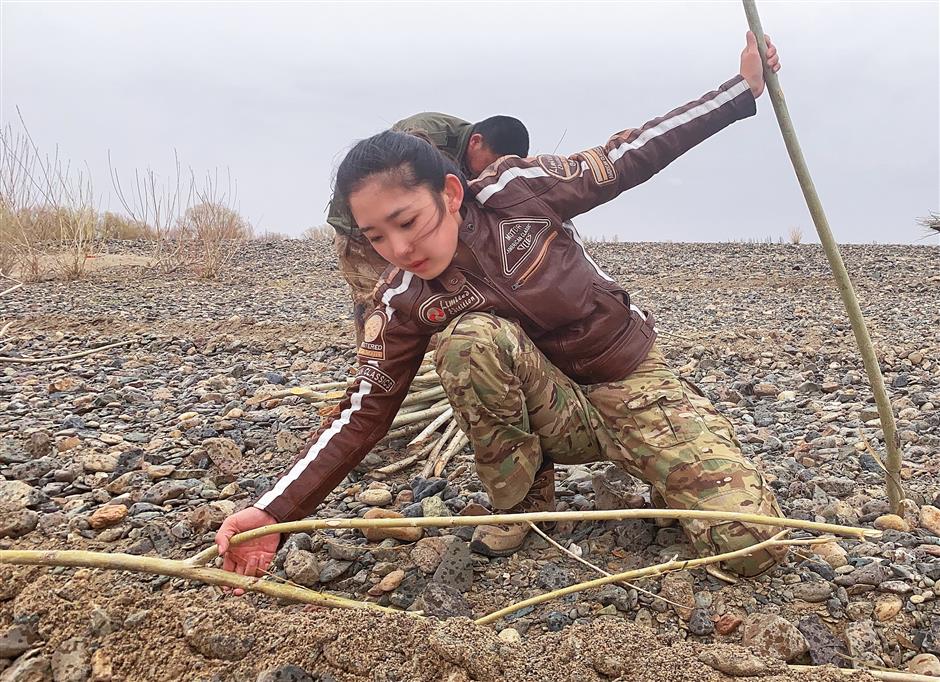 Chu plants a species of shrub that's an important food resource for the beaver with her colleagues for the "Beavers' Canteen" project.

The shrub is also the building material of beavers. The clever animal makes full use of it – it eats the bark and uses the inner part to build dams and lairs.

Chu considered planting shrubs for the beavers but found that might cost more than 2 million yuan (US$310,814). Her association is completely non-profit and could not afford such an outlay.

To raise the money, she turned to the Internet for help. She opened a Douyin account and posted videos showing how she rescued wild animals. She also livestreamed the life of beavers and let netizens know how the beavers ate the shrub she planted with their support.

Through her efforts, many people contacted her and asked what they could do to help the wild animals. 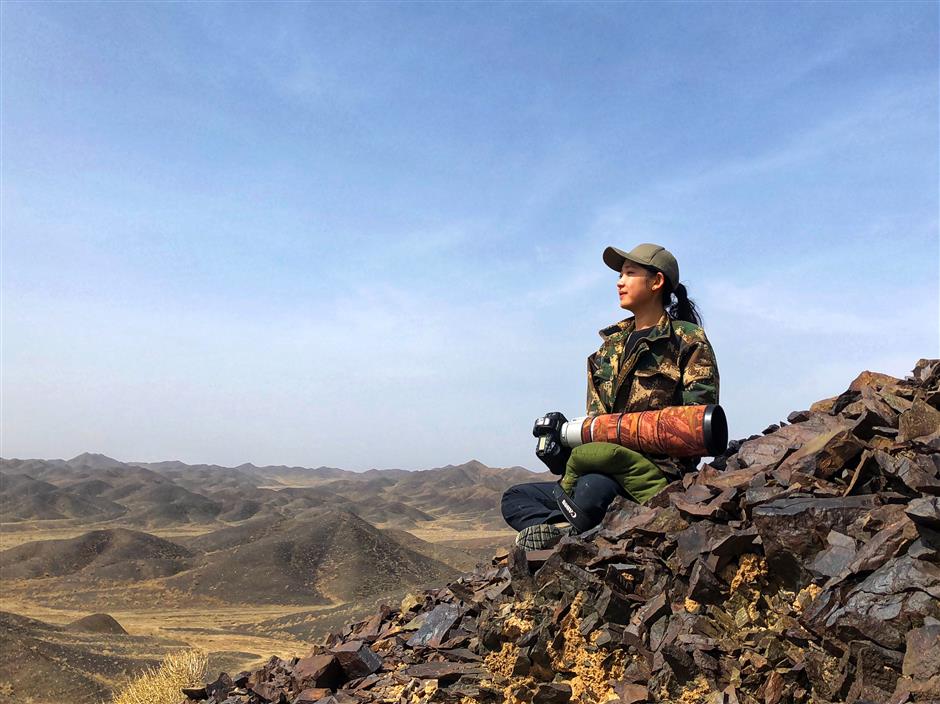 Chu sets up to take photos of wild animals in the Altai Mountains.

Then came another program, the Beavers' Ark, a hospital that Chu established for injured wild animals and for which the beavers are frequent patients.

Earlier this year, Chu received a call from the police, saying they had received a "big eagle" and wanted to bring it to her rescue center.

When they arrived, she recognized the bird as a vulture, a second-class state-protected animal, and that it had been poisoned.

It's very hard to cure a poisoned bird of prey. The possibility is like that of winning a 1-million-yuan lottery because the bird's metabolism enables the toxin to attack all its cells and organs at a speed that is faster than an antidote treatment. 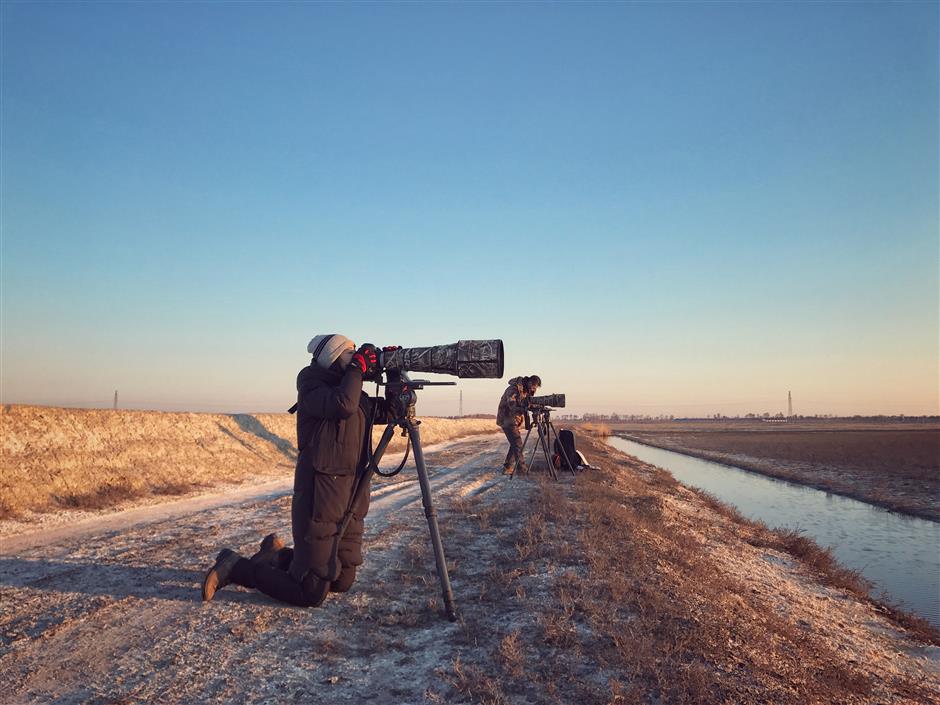 Chu takes photos of wild animals on a riverbank in Altai.

Prior to receiving the vulture, Chu had witnessed more than 20 poisoned birds of prey and none of them survived. A demoiselle crane which took pesticide by mistake died in front of her.

Given the urgency of the vulture's condition and need for treatment, and the rescue center being full of animals, the bird was treated in Chu's restroom with a large mat as the operating table.

Chu and her colleagues gave it detoxification injections every four hours. After the third day, the vulture stood and began thrashing about in the restroom.

It looked into the mirror, damage the mats, broke Chu's cosmetics with its beak and never let anyone use the toilet.

The whole progress was recorded on camera and posted on Douyin.

After it fully recovered, Chu took it to the mountains and released it, hoping it would never return. 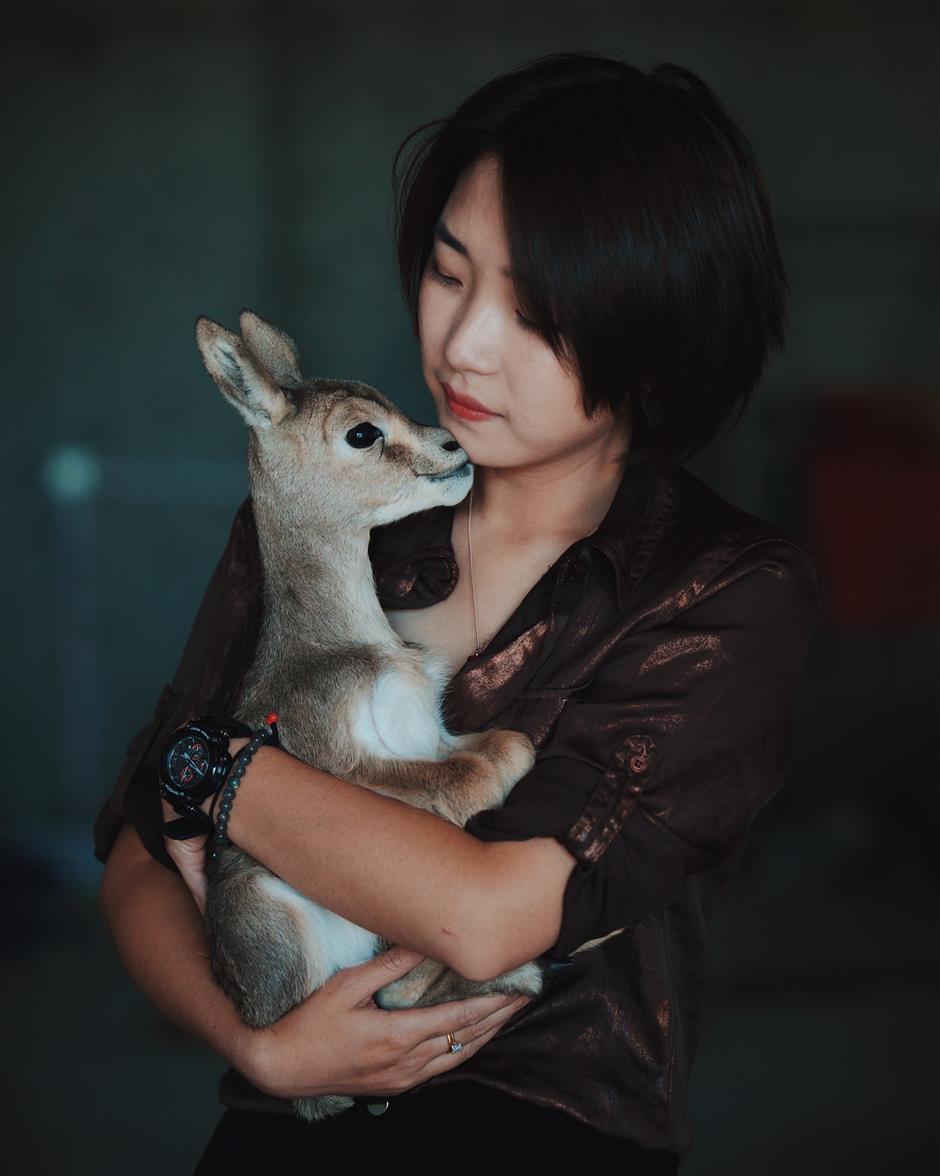 Chu gets up close with a black-tailed gazelle.

So far, Chu has rescued more than 60 state-protected animals, including a snow leopard, fox, lynx and golden eagle.

She worries that the treated wild animals will start to gain affection for humans, a dangerous outcome.

When she was a little girl, Chu's father told her never to approach wild animals and said that anything in nature should never been interfered with by humans.

Her first sight of the body of an animal hit by a car alerted her to the fact that animals which accidentally encounter the human world might get injured.

For instance, herdsmen set up wire fences around their meadows. And when some birds of grey dive to catch a rat, they could be hurt or trapped.

Chu once saved an Eastern imperial eagle whose wing was snared by such fencing. The wound was so serious she had to cut off the wing, leaving the bird to be raised in an aviary and never flying again. She also saw the remains of antelopes caught in the fences, their bodies devoured by other animals and only the skulls and some fur left behind. 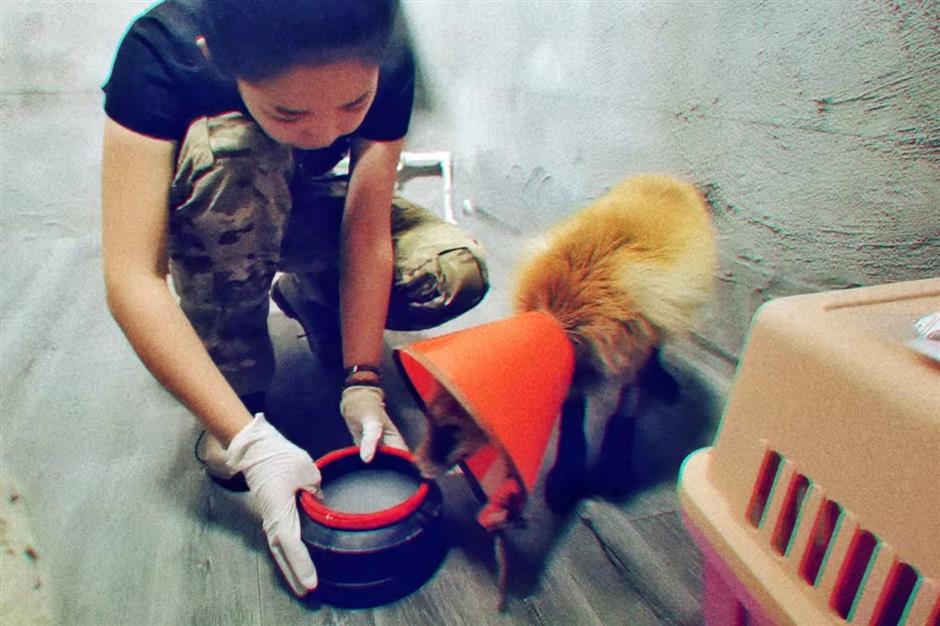 Chu has done a lot to educate people to keep their distance from the wild animals. In the Kalamaili Nature Reserve, Chu once found a wolf which died after eating the body of a sheep with poison secreted inside. The herdsmen had inserted the poison to kill the wolves and protect their sheep flocks. But other predators, like snow leopards and foxes, would also feast on the poisoned carcass.

As the sheep in the Altai are free-range, Chu assumed that other herdsmen would follow the same practice to protect their sheep. So she analyzed wolves' feces and found they mainly ate rats, plants and insects rather than sheep, although there was evidence they would sometimes feast on dead sheep.

She then helped the herdsmen learn more about the wild animals' behavior and started to compensate them for losses.

"I think the best protection for the animals is getting a balance. People here live a life by growing crops and grazing, and the wild animals also have their own ways of life," said Chu.

"It's better to work out a solution which can allow the people and wild animals to coexist," she said. 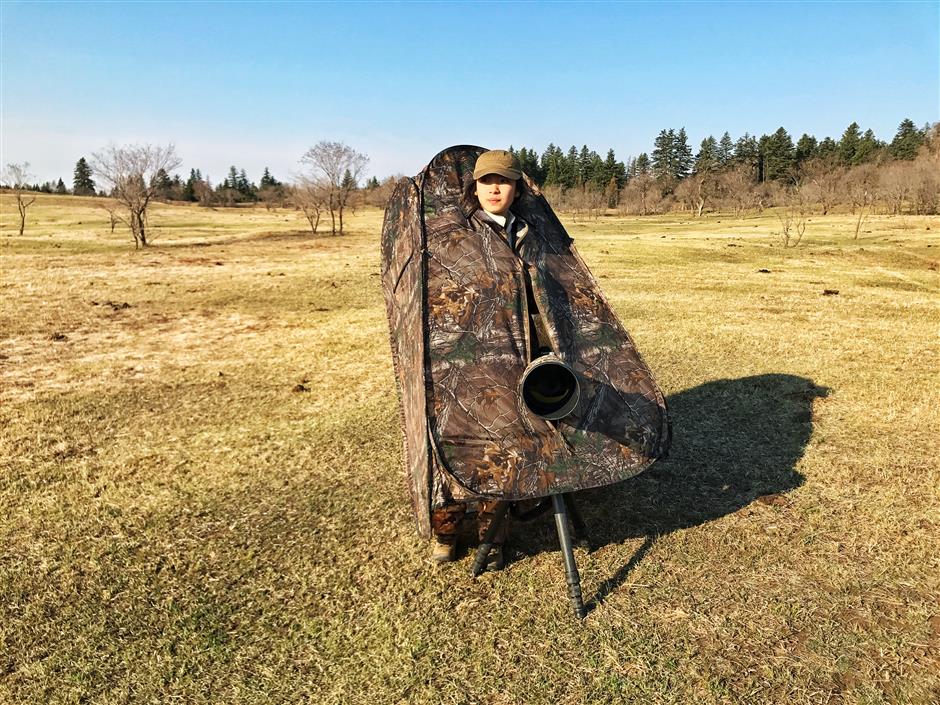 Chu uses a camouflaged hide to take photos in the wild.

"As a youth representative to the Biodiversity Conference, I feel that in the past, the post-1990s generation is often considered as a group of people who are not mature enough. But now, with the joint effort of more than 1 million of them, we achieved results which are recognized by the nation," Chu told Shanghai Daily.

"We think we are on the right track and what we have done is meaningful. We will continue to encourage more people, especially the youth, to participate in nature conservation."

She said they will continue with the rescue center, summarize their experiences and work out solutions to help other non-government organizations working in natural conservation.