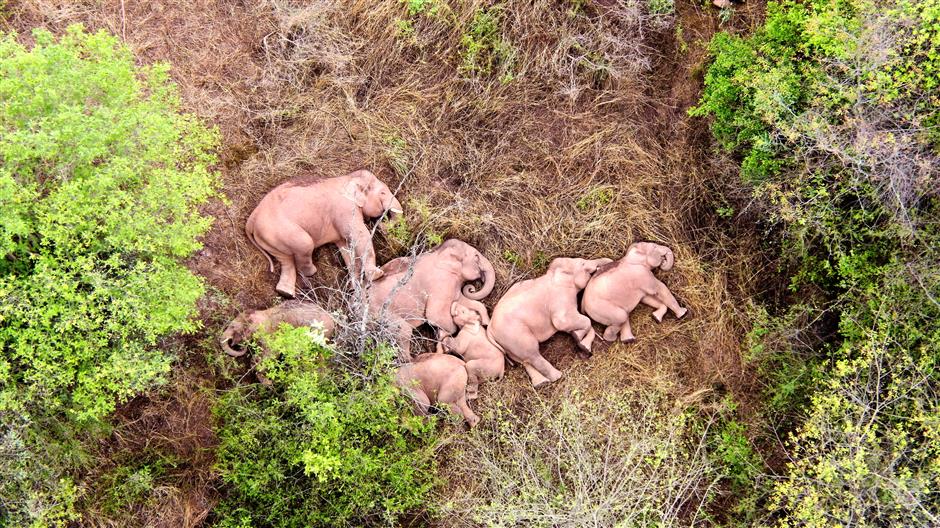 In an aerial photo taken by Zhang Xiong, a fireman with the Yunnan Forest Fire Brigade, the elephants sleep protecting the baby.

Zhang Sijie, 33, a fireman with the Yunnan Forest Fire Brigade, came face-to-face with an elephant this year.

Zhang and fellow officers were tasked with monitoring and guarding a herd of elephants that had left rainforests in southern Yunnan Province and were migrating northwards.

Previously he had only seen elephants on TV. But in Gaoliangdi Village in Kunming's Jinning District, he came across one only 10 meters away.

"For about 10 seconds, I could clearly see its face, the wrinkles on its skin and even the eyelashes," Zhang told Shanghai Daily. "I held my breath and the only sound I could hear was my heart beat. After the elephant judged that I wouldn't hurt it, it left."

Many people who care about wild animals will remember that some months ago, a herd of wild elephants made a long trek northward from rainforest to urban areas in Yunnan Province with Kunming as their destination.

The elephants and their "guardians" in Yunnan became a focus of the whole world.

This week, the 15th meeting of the Conference of the Parties to the Convention on Biological Diversity (COP15) in Kunming opened with the debut of a short documentary "Elephants' Journey in Yunnan."

The documentary explains how the number of wild elephants has doubled in the past three decades in Yunnan, and how the Yunnanese co-exist with them.

During the Leaders' Summit of the COP15, President Xi Jinping said in keynote speech delivered via video link that the story of the northward travel and return of the elephants shows the vivid results of China's endeavor to protect wild animals.

On the night of May 24, a group of "unexpected guests" arrived at Eshan County in central Yunnan. A herd of Asian elephants, which live in the tropical rainforests of southern Yunnan, left their habitat in the Xishuangbanna National Nature Reserve and marched northward toward populated countryside. 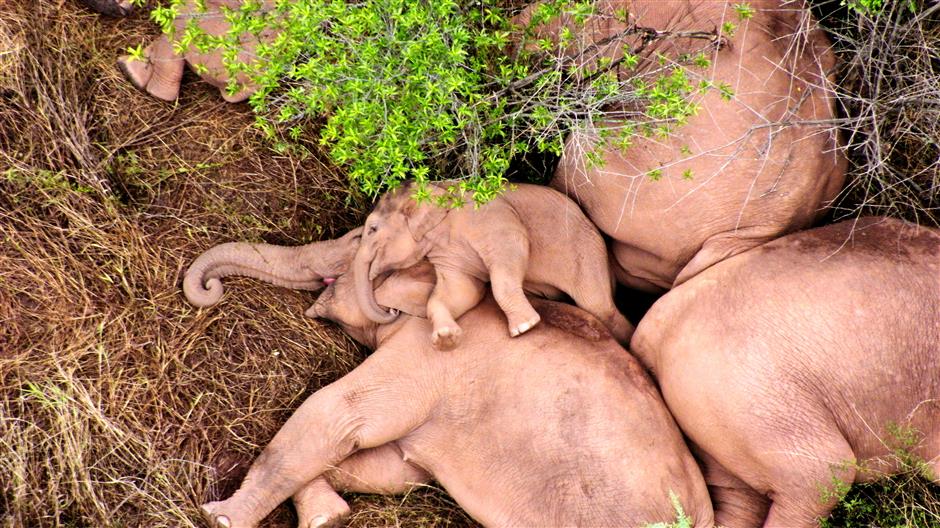 A female elephant prevents the baby from leaving the safety of the herd.

On their journey, a baby elephant was born, and two elephants returned home halfway. Sometimes the herd entered villagers and stopped by villagers' houses for food.

Since the wild elephants are sensitive and may attack, the Yunnan government set up a response team to track the herd day and night and evacuate residents to ensure the safety of both humans and elephants.

However, keeping an eye on an elephant herd is hard work.

Yang Xiangyu, 31, also from the Yunnan Forest Fire Brigade, recalled that he was dispatched to Eshan on May 27.

"At that time, I thought it would just be an emergency task to locate the elephant herd, and we could be back within a week," he told Shanghai Daily. "But later I came to know that it's a tough job and would take a long time."

None of the firemen left the team and all were all very willing to protect both the elephants and the people along their track, said Yang. 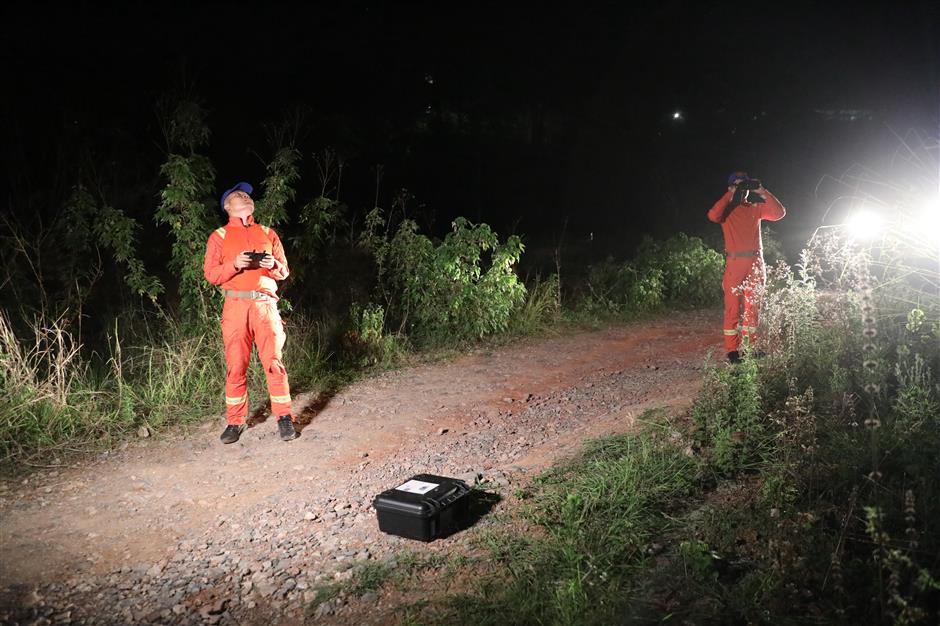 "We are used to monitoring forest fires and where the fire will spread," Yang said. "How it will develop can be judged by factors like the terrain and the intensity of fire.

"But we've never monitored wild living animals and where the elephants would go. How the journey would be was uncertain for us."

So they had to study the behavior of Asian elephants from experts and then judged the possible route based on the distribution of land, water sources and mountains.

"I felt that the thing the Asian elephants care most about is eating well," Yang explained. "So when they chose a route, they will consider factors like food and water sources."

From the practice, they've collected lots of experience on how to monitor the herd.

Their monitoring work lasted for 116 days, which tracked the herd for nearly 1,300 kilometers, covering 10 districts in four cities.

Sometimes it could be really difficult. The elephants usually sleep in the day and move at night so the firemen had their busiest work in the night hours, which required them to keep a clear mind.

"They moved fast at night at times," Yang said. "Sometimes during the gap of changing the drone's battery, or if there's a rainstorm, the herd might not be in the same place when we came back.

"Then we had to send several teams to look for the elephants. With the help of local officials and foresters, we gradually learnt to find the signs showing where they had gone, such as the footprints, the excrement and the food they left."

The firemen check drone video footage of the herd.

The firemen could only sleep for three or four hours a day, and once a team kept their monitoring work for as long as 26 hours.

One of the biggest obstructions on the herd's way back to the South was crossing the Yuanjiang River.

"Unlike the time they crossed the river when heading northward, in August, it was flood season. The baby elephant's height was only more than 1 meter so it would have been dangerous to cross."

Finally, the herd crossed the river over the Yuanjiang Bridge.

"As the saying goes, the elephants won't cross a bridge, while the ants won't cross a river. So we all thought it's an unbelievable thing for the herd to step on an artificial facility," Yang said. "It's like that they developed a sense of trust toward humans and thought the bridge was a safe place."

Before the bridge crossing, the government set a "elephant hotel" nearby, digging a pond for them to play and have a bath and left 2 to 3 tons of food.

Zhang Sijie witnessed the touching stories of how the baby elephant survived danger.

"When we were about to offer help, we found two adult elephants using their trunks, the forehead and anywhere they can use to push the baby out of the pond. It reminds me of the mother who lifted her baby out of the collapsed house at the cost of her own life."

Such acts made them feel that the elephants also have similar emotions to human beings.

The feeling was also proved by pictures taken by another fireman Zhang Xiong. 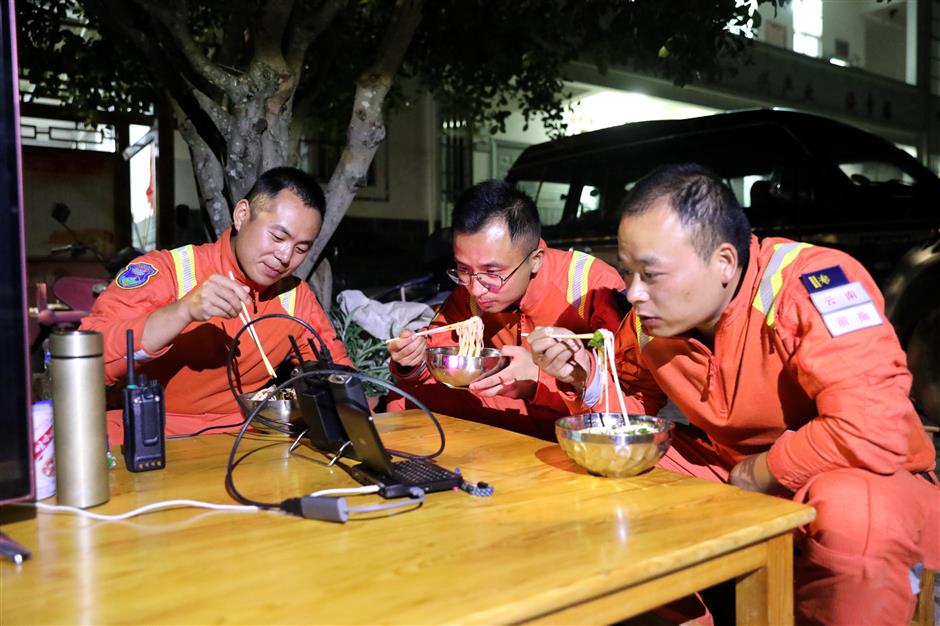 Yang Xiangyu (middle) and two colleagues keep an eye on herd during a meal break.

In one of his aerial photos, the elephants are lying on the ground and sleeping with the baby elephant in the middle, surrounded by three female elephants to protect it. This photo was given the name "Elephant Family."

A video taken on October 13 shows that the herd is now in the forest of Pu'er City's Simao District. The baby elephant has grown bigger and can search for food on its own.

Wang Xiangang, vice-governor of Yunnan Province, said at a high-level segment parallel round table session of the COP15 that Yunnan will establish a long-term mechanism to protect the Asian elephants.

The province is also facilitating the set-up of the Xishuangbanna Rainforest (Asian Elephant) National Park to apply scientific cross-regional protection of Asian elephants and restore the ecology of their habitat.

According to Chen Mingyong, a professor at Yunnan University's School of Ecology and Environmental Science who served as an expert to the herd monitoring, their research team has boosted the construction of the Asian elephant national park.

"We now have many natural reserves and an important thing that we found is that the major goal of many of them are to protect the forest ecosystem," Chen said. "But for the Asian elephants, which eat a lot, what they need is not only the forest, but food, water sources."

With the establishment of a national park, specific protection and management can be given to the Asian elephants to meet their demands.