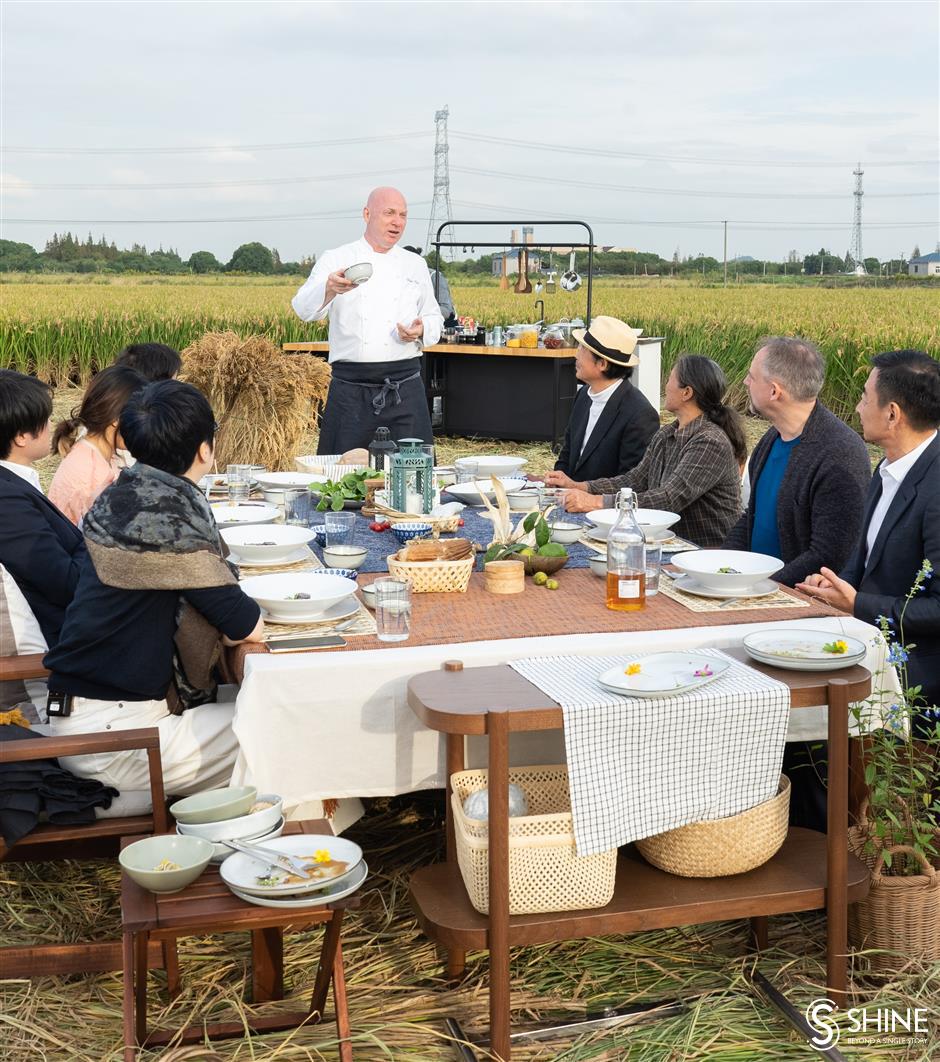 Renowned chef and restaurateur David Laris introduces the cuisine he made to the guests in Shanghai's suburban Qingpu District.

David Laris, an internationally renowned chef and restaurateur, was busy preparing ingredients he collected in Shanghai's suburban Qingpu District to cook a gourmet meal on Monday for a charity project initiated by Shanghai Daily.

The project titled "iDEAL Dining" aims to build a bridge between man and nature, countryside and city through food. Last year the focus was poverty alleviation, and this year under the theme of "The Field of Hope," it has a new goal – revitalizing the countryside in Shanghai.

"The 'iDEAL Dining' project is a series of events telling the stories of Shanghai to the world. This event is trying to showcase the harmony between humans and nature and the beauty of coexistence," said Zhu Jiajian, head of Shanghai Daily. 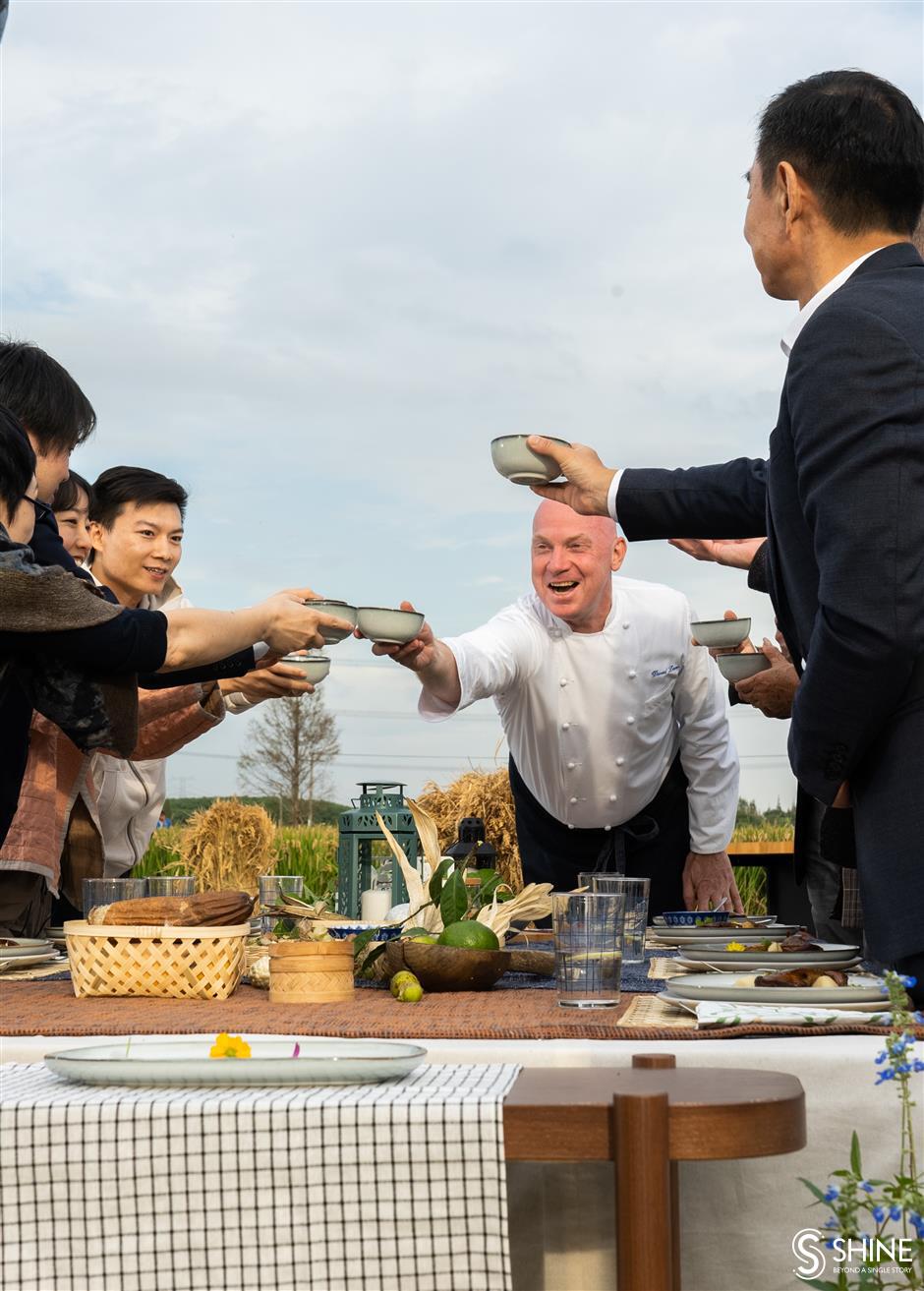 David Laris toasts the guests during the event.

"Last year, we focused on how ingredients from distant areas which receive poverty alleviation support from Shanghai go on the city's tables with creative ideas from five-star hotel chefs," she explained. "This year, we set another 'iDEAL Dining' table in Qingpu, where Yangtze River integration is demonstrated. Themed a 'field of hope,' we will show the world the 'Chinese practice' of rural revitalization by displaying the vitality of the land and farmers' joy of the harvest under the nation's rural revitalization strategy."

She hopes overseas readers can see the beautiful and livable modern countryside life under the social governance based on collaboration, participation and common interests via the perspective of globally renowned chef Laris. 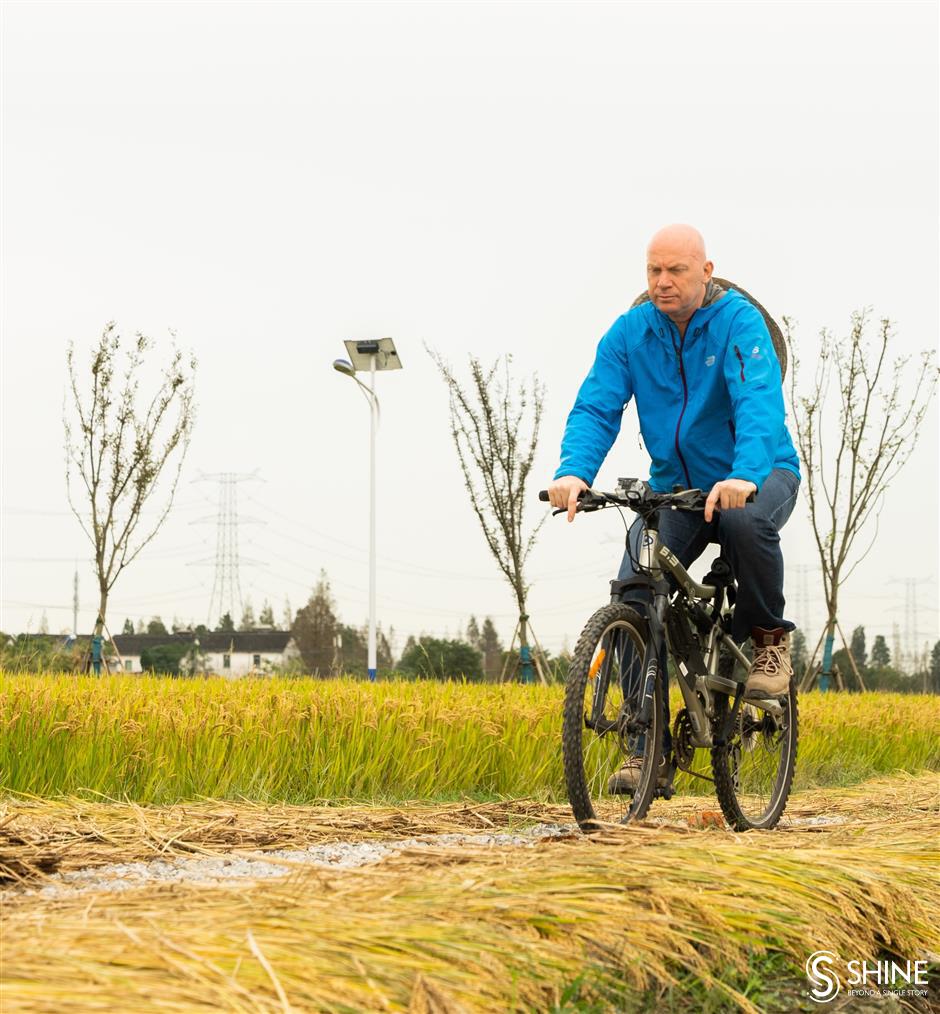 Laris rides a bicycle to look for proper ingredients in the Qingpu District countryside.

Over the weekend, Laris attended a wedding ceremony in Qingpu and tried some local food. Riding a bicycle, he traveled around, looking for proper ingredients in lakes and greenhouses.

The ingredients, including hairy crab, duck, mushrooms, radishes, water bamboo, okra and rice, were made into cuisine combining both Chinese and Western styles.

"It's so much fun to be able to come to farms, actually look at the products, pick the products, and then make a menu. So I want to do something that is respectful of the products, but also new, so that my guests can have a really interesting experience because I don't want to do the same old thing," Laris told Shanghai Daily.

"I want to respect the ingredients, respect their origin, respect the essence of the Chinese flavors, and then create something that's kind of more my style. And I hope that surprises them and creates discussion and excitement around it." 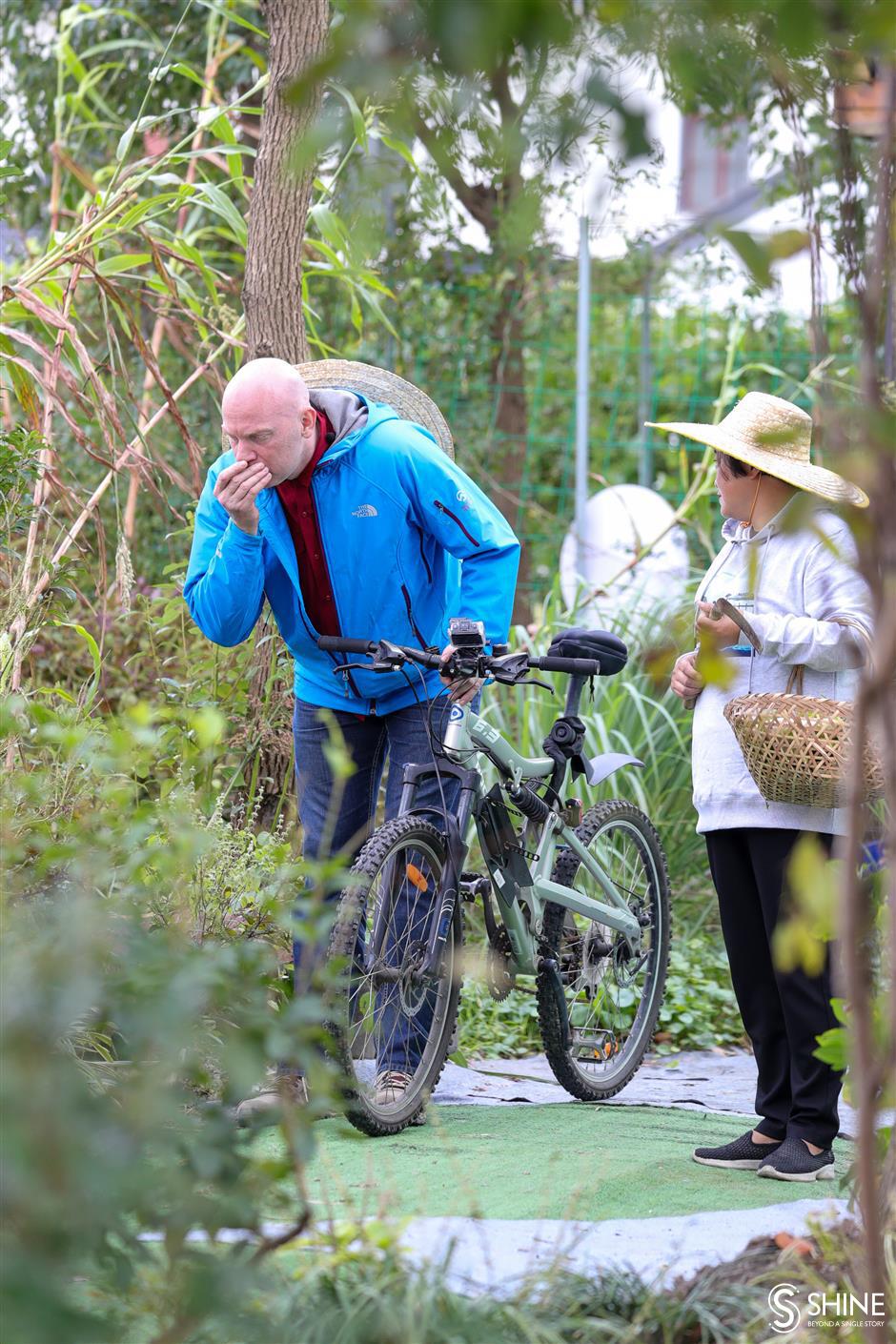 Laris looks for local spices for his gourmet meal.

Laris started his career in Sydney and then moved to London. He has also worked in Hong Kong, Vietnam and Macau before arriving on the Chinese mainland in 2003 and opening his first restaurant on the Bund in Shanghai. Then he began to start his own company and consult for several different restaurants.

For him, it's a great idea to have such an event because he thinks local products should always be highlighted. "We should celebrate farmers and what I called the 'artisanal country,' where things are made in a way that still really respects the essence of the flavors and ingredients." 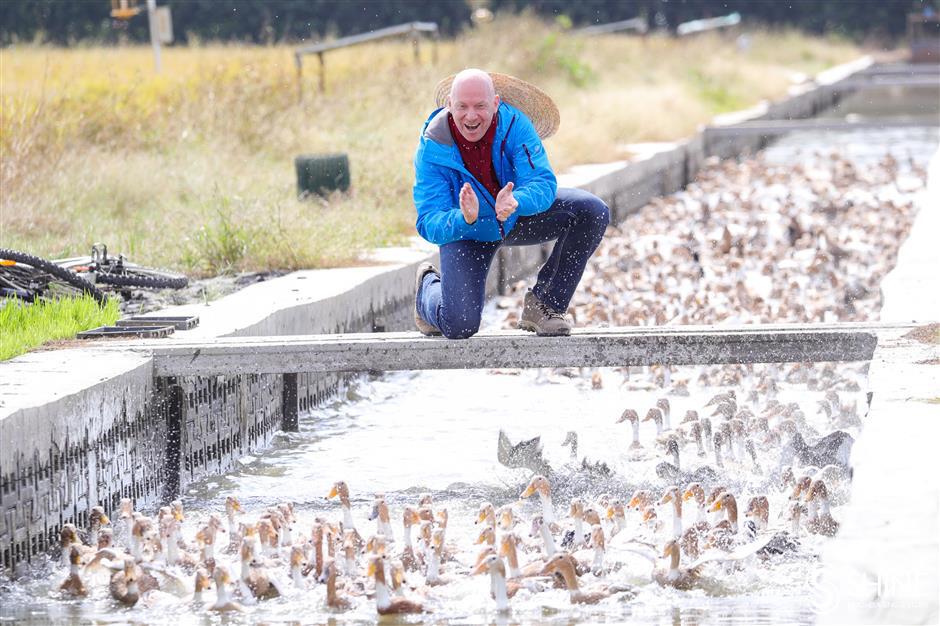 David Laris looks for local ducks to be used in his meal.

"Sometimes big businesses forget about where things come from. And sometimes people forget that at a product's beginning, there is a farmer and a story, and then it eventually reaches your kitchen or your home," said Laris. "So I think it's really important and a good thing to do this. I also think chefs always want to know where the product is coming from, especially the good chefs. They always want to have as much knowledge as possible."

"They want to understand the story of the product because that goes into the menu and that's part of how they think or should be thinking," he added. "The idea of knowing where the product comes from, what its story is, even the person who grew it or made it is really, really kind of special, I think, and important as well," he said. "I feel very lucky because I'm invited into the farmers' home and into the village." 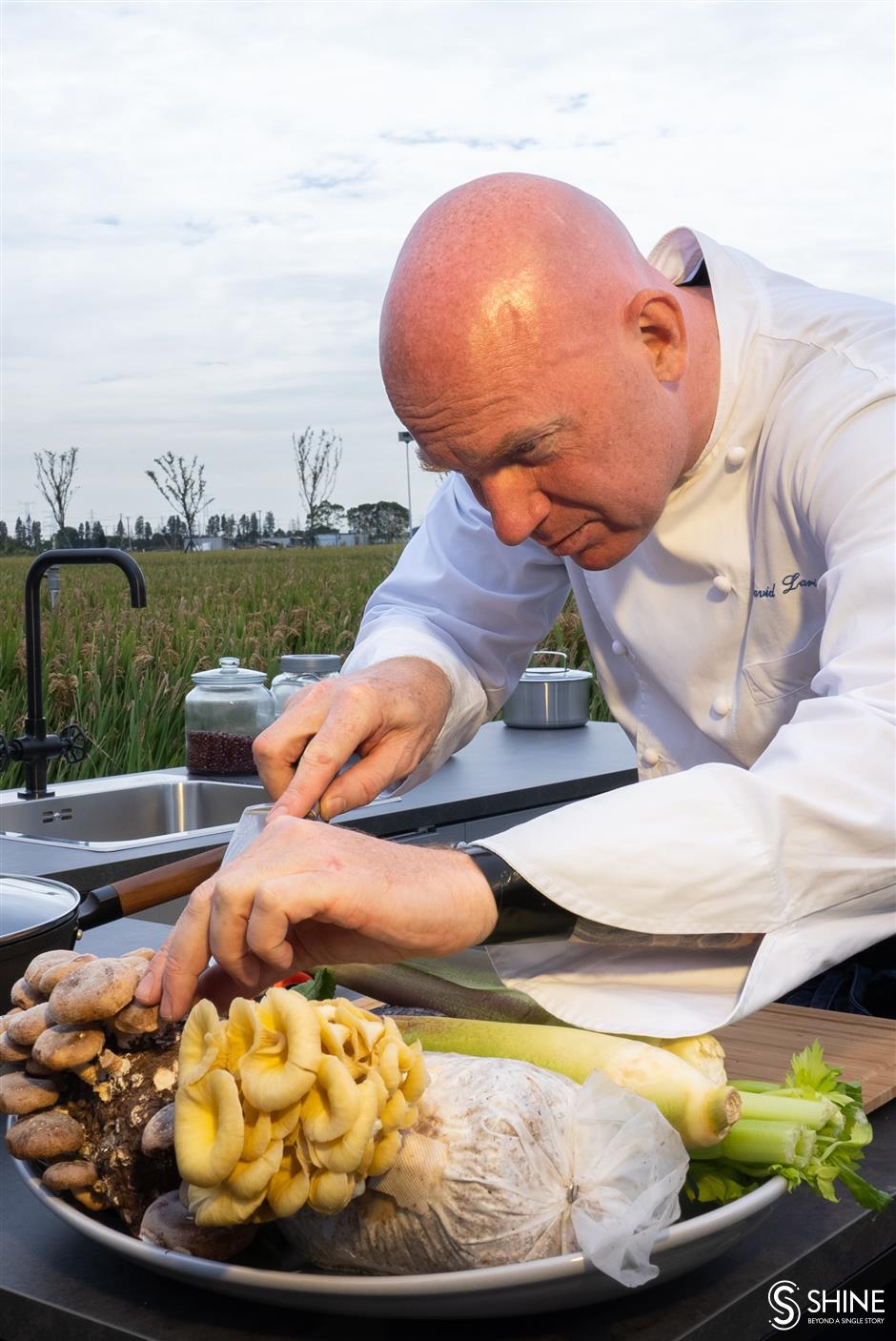 Laris carefully removes mushrooms from a section of tree trunk where they grew.

He said the dishes are made from what he sees here. "This morning we went into a reservoir which is next to a huge lake. The water seemed very clean and obviously if the crabs are doing so well there with such a high quality, it tells me the water system is very well-kept here. I also understand there are no factories around, which is good for the ecosystem.

"We saw water bamboo and okra growing beside it. The farmer puts the okra there because if the water isn't clean, the okra will die. So nature is amazing, and farmers understand nature that way." 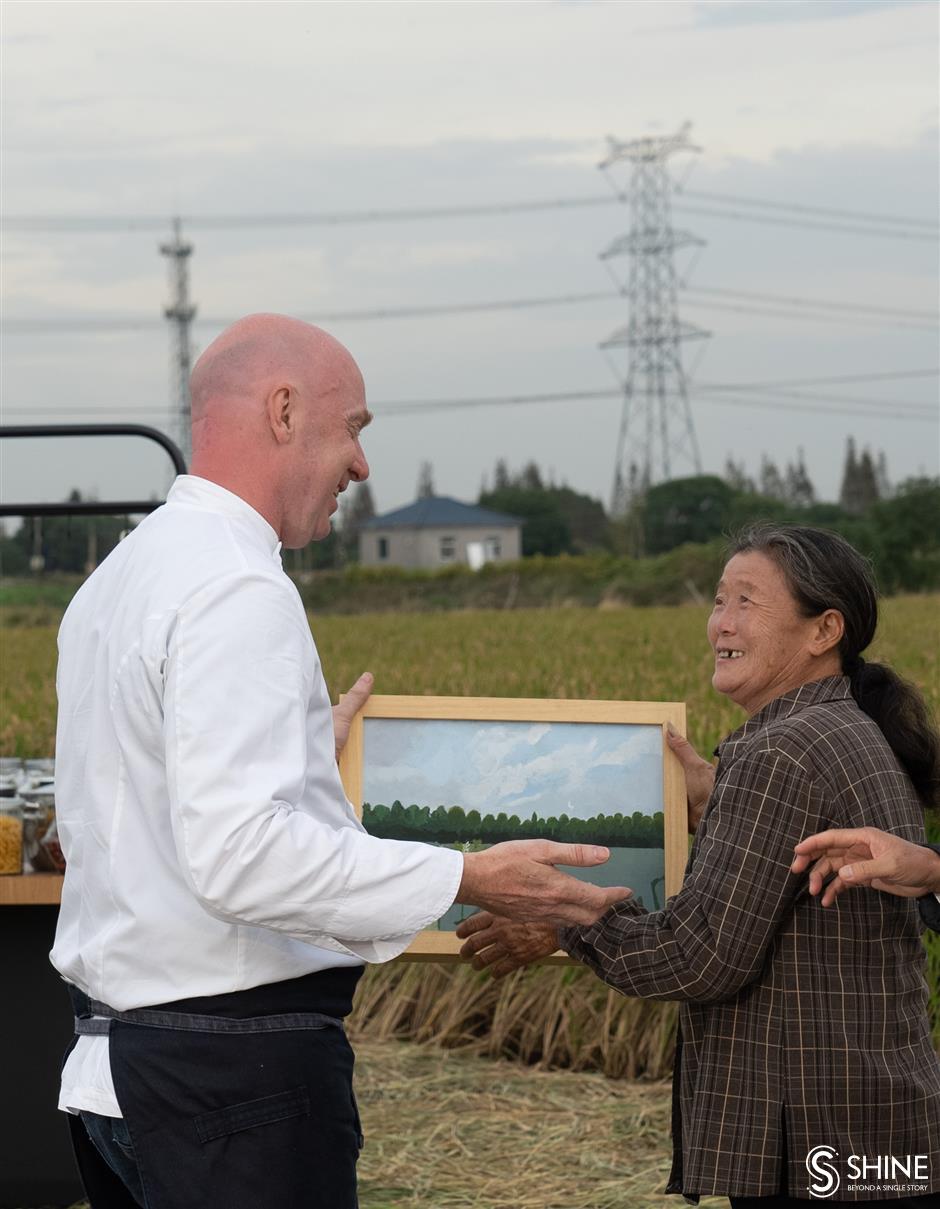 One of the guests, Xu Fengying, a 75-year-old painter living in Qingpu, gives Laris one of her oil paintings as a gift.

Laris prepared seven dishes for this banquet in rice fields, during which eight guests were sharing their views toward the countryside's development, at a dining table supplied by IKEA China.

"The iDEAL Dining project brought us to Qingpu to witness the flourishing scenes of a countryside in a new era," said Chen Qiufan, one of the guests who is a science-fiction writer. "We tasted the freshest gourmet food in nature, which was created by perfect cooking from Michelin-starred chef David Laris. That's what happiness is." 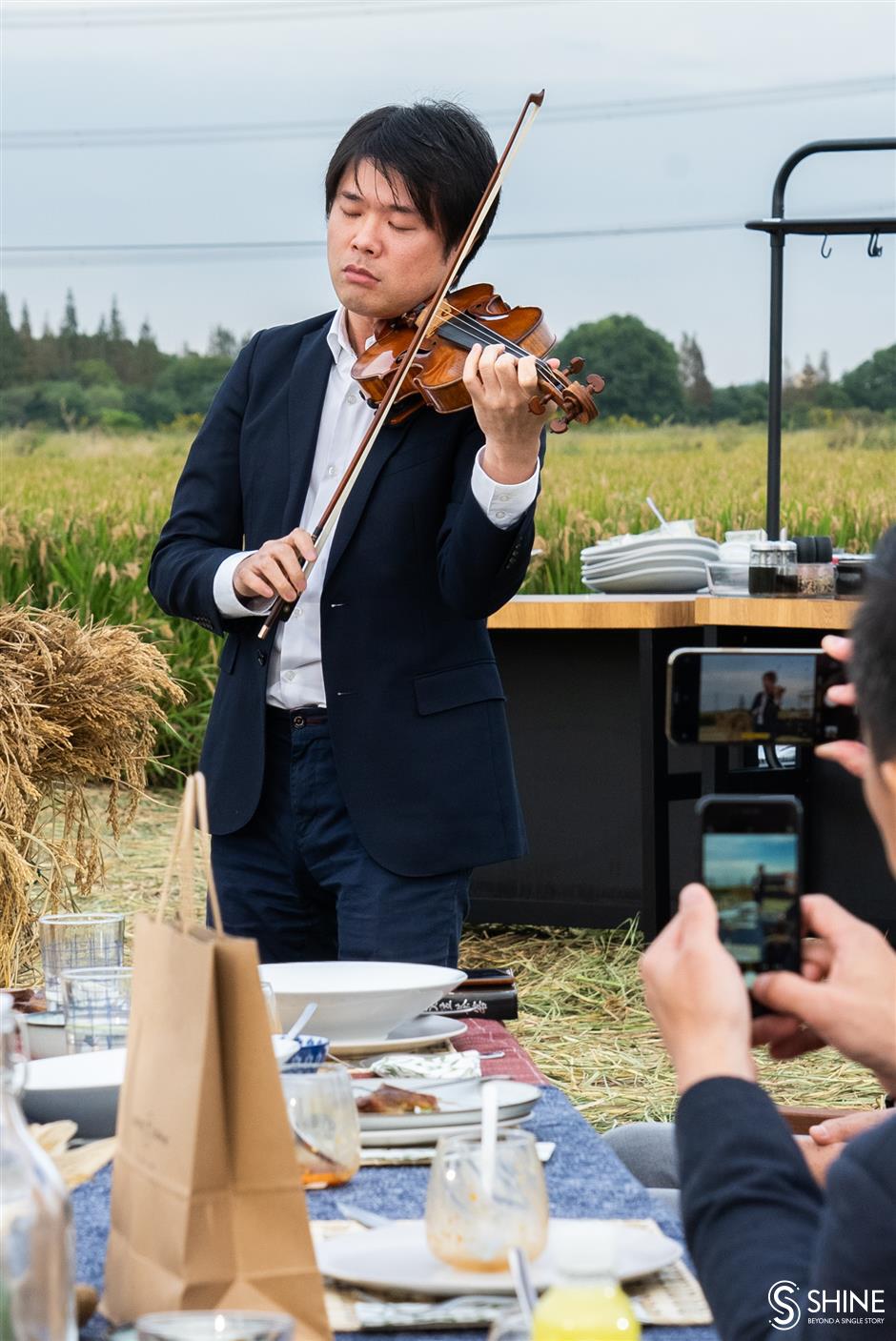 Violinist Huang Mengla gives a performance after enjoying the meal.

Another guest, violinist Huang Mengla, said it was such good fortune to have a meal with friends and chat in the fields.

"The meal is made of local fresh ingredients with the brilliant cooking of David Laris. And it's very healthy," Huang said. "This meal not only satisfied our appetite but also brought visual, olfactory and even spiritual joy. It's high-level artwork in the best space." Eight celebrities from different walks of life gather in Qingpu and enjoy the banquet provided by David Laris (second from right) with local food for the project "iDEAL Dining 2021: The Field of Hope."

"I had the chance to cook for our VIP friends, and that was really very, very cool," said Laris. "To be honest, it took a lot of hard work getting there and it took two days to set up. But we were able to see the local produce that we'd found come to life and be served in that setting in the field. Although I feel tired, I'm also exhilarated and feel very lucky to have a chance to be part of it."

As chef and restaurateur, Laris believes that chefs have a very fundamental role to play in supporting local produce and local farmers. "It's not only from the fact that it's the right thing to do, especially if we're talking about supporting smaller production, artisanal production, but also it's a responsibility we have to reduce carbon emissions."

"People who are touching the food firsthand and building trends need to be leaders. So I think fundamentally chefs have a large role to play in supporting local industry and farmers." 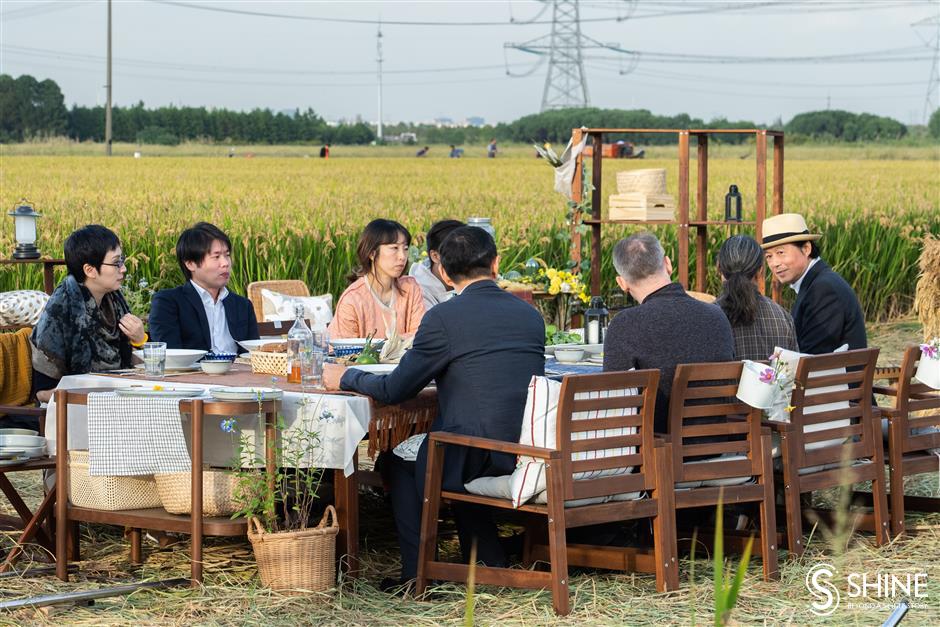 The eight guests talk with each other at the table.

From his point of view, the chef should not just be locked inside a kitchen by four walls and writing a supply sheet. "Chefs should be going out to farms, visiting farmers, touching the product, speaking with farmers, and even helping guide what products they want. Something I've done a lot in my career is to speak directly to farmers, I think it's absolutely essential."

"It's really important that the countryside continues to be respected and rejuvenated," Laris told Shanghai Daily. "Resources need to be given to the countryside to build an industry that is closer to urban settings so that the cities have more direct access to a product that is fresh, that is clean and that is lowering the carbon footprint. I think we should see not just farmland close to urban areas supported but also see more of a push toward urban farming in cities."