Of her several nicknames, Hou Xia prefers daxia, which means swordsman in Chinese.

Sharing the same pronunciation with her given name, xia translates as honorable, chivalrous and heroic, revealing an ultimate Chinese humanistic spirit. As a key researcher of China's advanced laser technology, Hou really lives up to the nickname as a modern female daxia in the scientific community.

Thanks to trailblazers like her, China is now no longer a newbie or a dilettante in the field of space laser tech. What's more, the country has launched the largest number of laser devices into space over the last decade, a feat which was inconceivable years ago.

Just at the beginning of this century, China still relied on importing core components of laser devices.

"We started from scratch," she admitted, noting that "there were no giants upon whose shoulders we could stand" when they were assigned to develop space laser devices for the country's first lunar probe. "Many experts remained unconvinced that we could make 100 percent original devices. But for me, that merely strengthened my resolve to make them."

For her outstanding achievements, she was honored as one of the 10 "most beautiful scientific and technological workers" in Shanghai this year. 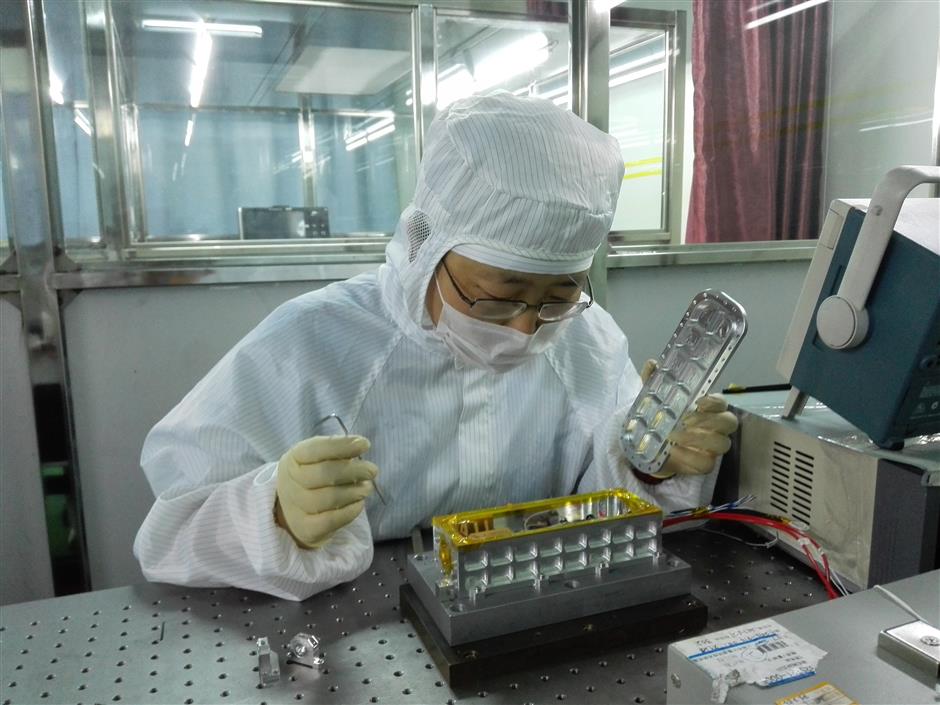 Hou Xia is fully concentrated on her research work.

Hou was somehow destined to devote herself to advanced laser research.

She developed a consuming passion for science fiction in her childhood. After school, she rushed to bookstores, strolled through shelves and leafed through countless pages of outer-space fiction stories.

"I always pressed my daddy until he finally gave me money to buy the newly published copies of these books," she said with longing for those innocent days gone by. "I can still remember a book about 'deadly light.' As I grew up, I got to know that what they meant was a laser."

Maybe her fate with laser first showed itself at that time. But for sure, her childhood reading habits planted the seeds of science in her mind.

One of his favorite science-fiction stories is "The Hitchhiker's Guide to the Galaxy" by Douglas Adams. "It is undeniable that his huge investment in the space industry is related," she added.

At university, Hou majored in optical engineering. After graduation, she went to work at the Shanghai Institute of Optics and Fine Mechanics (SIOM) of the Chinese Academy of Sciences. It was there that she realized that what she had learned in the past didn't match her new work.

As a simple example, both cameras and laser devices are optical instruments, but the former receives light, and the latter emits light.

"I was totally confused. I just knew about things like cameras. I didn't know much about lasers. I didn't know what to do and I didn't find any point in them," she said, describing it as a fresh daring adventure. But soon, she found it to be interesting and challenging.

She indulged herself in the research just as her mentor had instructed her: "There are so many researchers, but very few can reap fruits. Just do it."

Now, scientific research is simply a platform for her to do something she enjoys; to contribute to academia but not to gain reputation or status. "I love science," she said, "and I wish to see my research making an impact in society." 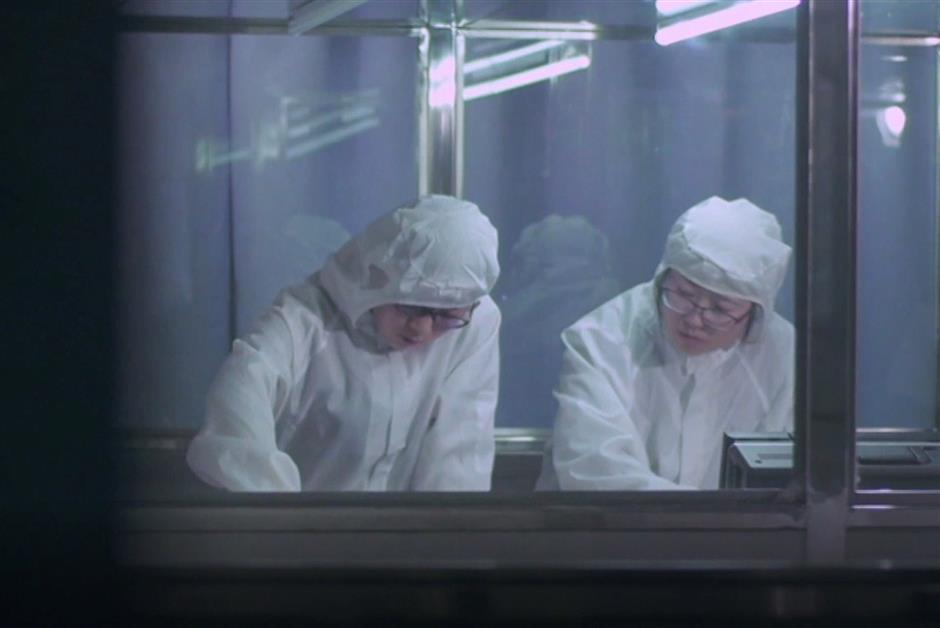 Hou Xia (right) at lab work with a colleague

China's first laser device was made in 1961. Three years later, SIOM was established as the earliest institute in China specializing in laser science and technology. Half a century later, space opened up. As China joined the space race, the institute began to explore laser applications in space. However, for decades, it has lagged behind on the world stage.

"Developing a machine from just a scientific experimental device is riddled with technical difficulties," Hou said. "Also, there is a huge gap between making it work on Earth and in space."

The vacuum environment, microgravity, dramatic temperature changes of 200 to 300 degrees Celsius, as well as the extremely high thrusting force from rockets, have made it a rather difficult task. It requires multidisciplinary knowledge.

Once, she made the mistake of pressing an oil pump in the wrong direction due to her limited knowledge about the device. Over time, she worked to become a versatile researcher to fill in these gaps in her team after she became well versed in advanced laser technology.

Back in 2003, China's space laser science was still in its emerging stage. With no previous products nor research to refer to, Hou and her colleagues blazed their own trail.

"At that time, only the US had successfully developed lasers for a space probe. There was considerable skepticism about our efforts," she said. "But we, including our government, were all so steadfast that we had to become technologically self-reliant. So, from a small component to a whole complete device, we created it step by step, and finally a truly domestically developed laser device was launched into space in 2007 as a payload of the Chang'e-1 lunar probe."

Hou said: "It has strengthened my decision to devote myself to science. Also, I've gotten to understand the right ways to do scientific research."

Known as China's very first solid-state laser for a laser altimeter, it emitted the first laser onto the moon's surface on November 28, 2007. The data collected by the satellite altimeter gave rise to a lunar topography model, from which middle-scale volcanoes and basins have been discovered.

Hou and her colleagues continued to make breakthroughs at breakneck speed.

In later lunar probes, the laser devices they developed were equipped with multiple functions, such as drawing a 3D map on the lunar surface to help the rover find an easier landing point. 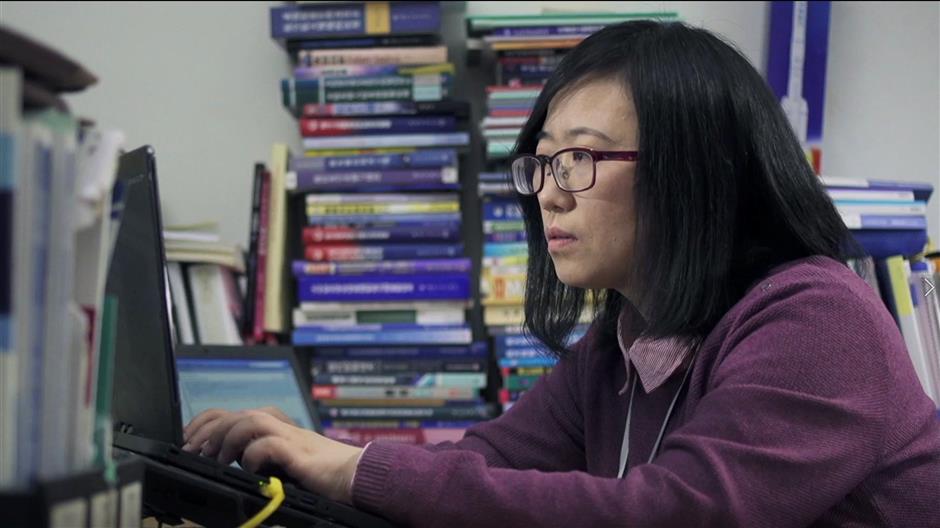 In 2012, she started to switch her team's research focus to space laser communication and laser remote-sensing technology. Four years later, she led the team in developing the country's first lidar to detect particles or gases in the atmosphere.

Meanwhile, she also developed a laser device for the first-ever cold atom clock working in space. It was sent into space along with the Space Laboratory of China's Tiangong-2 in 2016.

The cylinder-shaped black object bears no resemblance to any ordinary clock, but it is one of the most advanced timepieces ever. Using the advanced "cold atom" technology, it is so accurate that it will not be off by one second during 30 to 300 million years in space.

"It has been stably operating for over four years up till this day," Hou said. "China was behind other countries in the beginning stage of development, but now we play the leading role."

Nowadays, besides space exploration, space lasers are mainly used for laser communications to achieve interstellar communication, remote sensing and monitoring such as analyzing the Earth's atmosphere, as well as science experiments conducted in space that cannot be properly done on Earth.

China has grown into a major power in the space laser field, according to Hou. However, she said, it still needs to improve the development of high-end equipment, industrial materials and advanced theories.

Over the years, her team has grown from less than 20 to 200 people now. But women only account for about one-fourth of the team members.

As one of the few female leaders in the scientific field, Hou has noticed the lack of representation of female scientists.

"Young female scientists are generally under greater pressure, largely because of expectations from their families."

Hou herself went through such a stage when her family members cast doubt on her career choice and even scolded her for her lack of presence as a mother.

Devoting herself to work, Hou has limited time to spend with her family. She accidentally found her son's diary one day, and saw him writing that "Mom does not keep promises. She said that she would be there with me for the weekend, but every time she lies."

Previously, she was terrified of heights. But her work requires her to climb high up to install and test equipment. "I was afraid. But I knew I had to overcome my fear. So, I summoned up the courage. Gradually, I found myself getting used to it. I'm not afraid of heights anymore," she said.

Over time, young, talented researchers come and go, which made her realize the importance of keeping young talent around.

"I consider fostering budding scientists as my primary job right now. I want to see more promising scientists remaining in this field," she said, with great dedication.

She pays close attention to her team members. In fact, she often spends most of the day, sometimes even an entire day, patiently talking to them, encouraging them both academically and personally by offering them potential solutions to their concerns.

"They are under great mental stress. They have to solve difficulties in their research as well as affairs in their daily lives," she said.

One day, a young man in her team blacked out for a time after days of hard work at lab.

"I blame myself for this," Hou was almost sobbing as said so. "The research occupied his life. He slept at the lab. As soon as he woke up, he continued working. I tried to persuade him to take a day off but he refused."