What's New at CIIE: Manufacturers drive green and smart into the future

China has seen a surge in sales of new-energy cars in recent years, which shows the commitment by the government and the public to a low-carbon future.

Statistics show that the penetration rate of new-energy cars in the retail car market in China in the first three quarters of this year reached 12.6 percent, a rise of 6.8 percentage points from the same period last year. In September, one in five retail cars sold in the country ran on new energy.

The perspective of a green future for the automobile industry is more articulate than ever at the fourth China International Import Expo. Exhibitors are presenting their up-to-date products and solutions which will contribute to the green ambitions of the country.

The GMC Hummer EV pick-up and SUV, the world's first all-electric supertruck, made its debut in China at the CIIE this year drawing a lot of attention.

This model was a product of the Ultium EV platform of General Motors, which was also presented at the CIIE. The company aims for zero emissions of all of it's light vehicles by 2035 and carbon neutrality in its global products and operations by 2040. 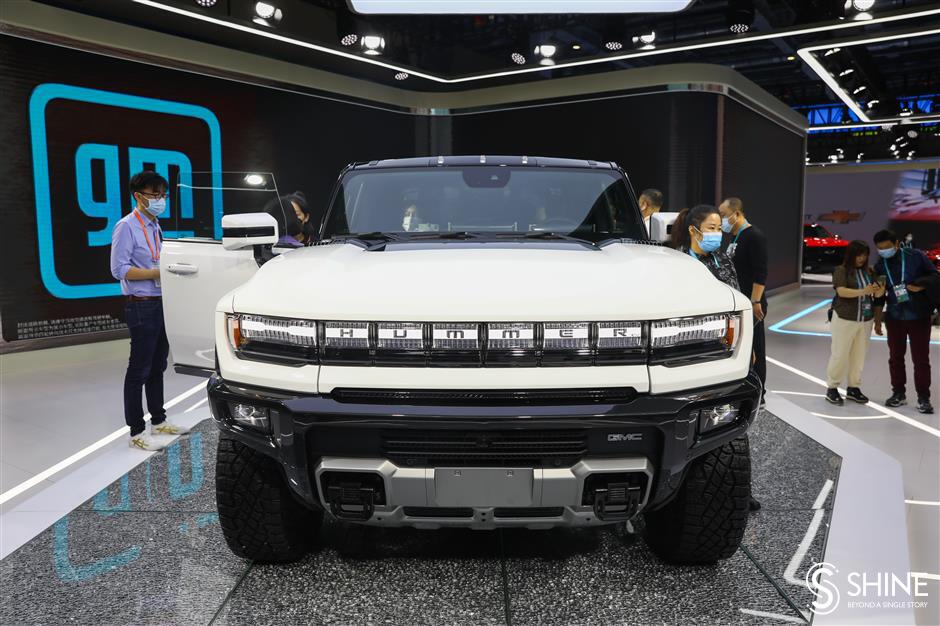 The GMC Hummer EV, the world's first all-electric supertruck. The vehicle is unique in its ability to drive diagonally at low speeds as its rear wheels can turn up to 10 degrees in either direction. This helps it to traverse tight trails with ease. The model is also equipped with the innovative Extract mode which can lift the vehicle by six inches for a smooth drive in rough terrain.

With planned investments of more than US$30 billion in electric vehicles through 2025, Ford, the American automobile giant, expects 40 percent of its global sales to be battery-electric vehicles by 2030.

A symbol of its quest is the Mustang Mach-E, the first electric version of the legendary Mustang and the first electric SUV in the company's line-up. Presented at the CIIE this year, the first locally manufactured cars of the model will be handed over to Chinese customers by the end of this year.

Last year, Ford announced its intention to achieve carbon neutrality globally by 2050. By 2035, all of its plants across the world will be entirely using renewable energy to power manufacturing, according to the company. 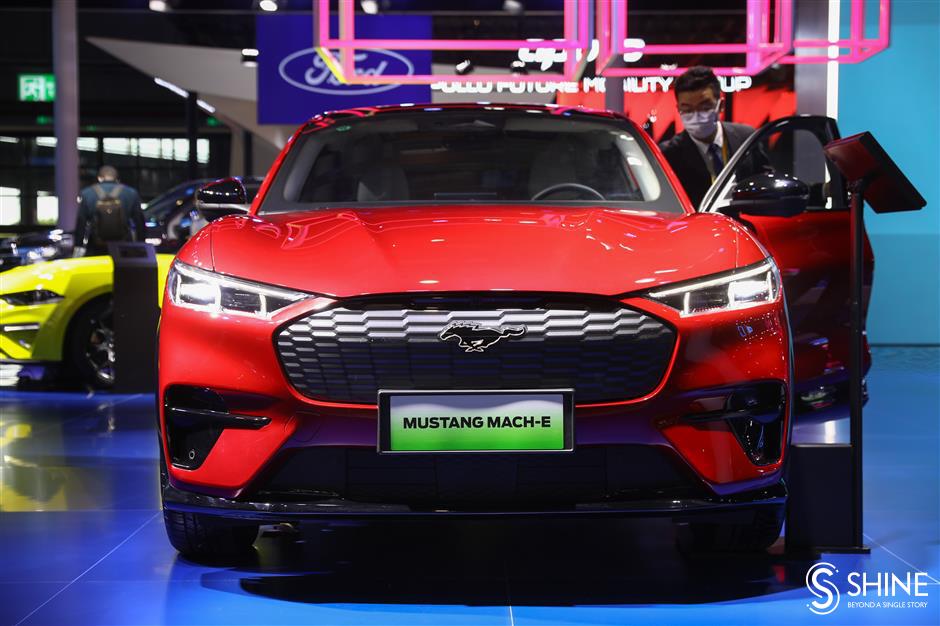 Ford's Mustang Mach-E, the first electric version of the legendary Mustang and the first electric SUV in the company's line-up. The model is equipped with the company's BlueCruise technology which allows its driver to operate the vehicle hands-free while being monitored by a driver-facing camera which makes sure that the driver is keeping his eyes on the road ahead.

By 2030, 40 percent of the more than 50 models from the group in the Chinese markets will run on new energy, according to the company. 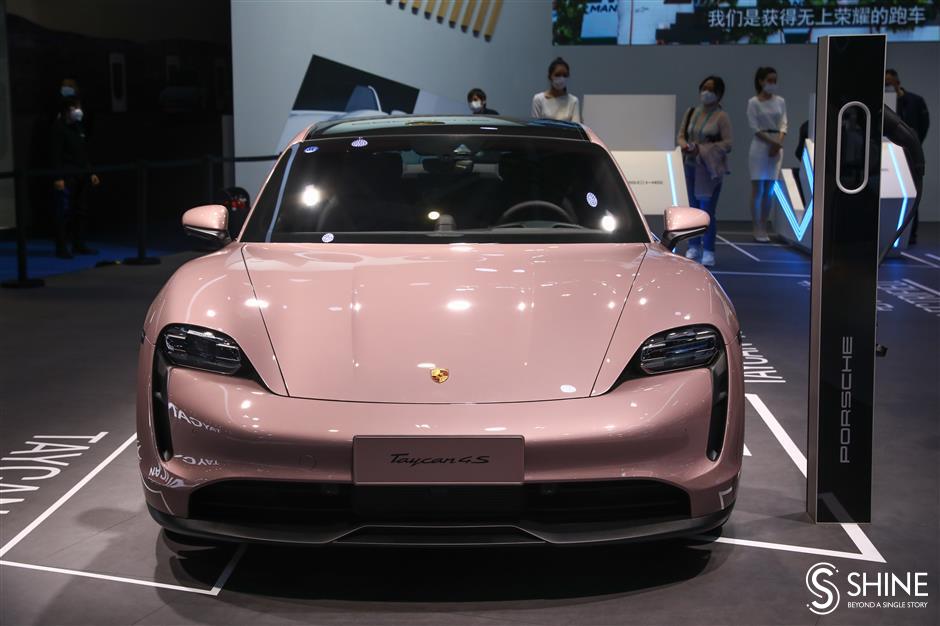 Taycan is the first all-electric sports car line for Porsche. The Taycan battery exploits its potential by means of pouch cells chemically optimized for maximum performance with a long range. It's also based on 800-volt technology instead of the usual 400 volts, which enables improved charging and drive performance with smaller cable cross-sections, which has a positive impact on the overall weight.

Toyota, the Japanese car maker which is one of the forerunners in the innovation of electric vehicles, is providing a preview for the public of its three electric vehicles. They are going to serve the coming Winter Olympics and Winter Paralympic Games in Beijing early next year.

After Auto Shanghai 2021, the company brought here again its futuristic looking Toyota bZ4X Concept SUV. The model is expected to be mass produced next year. 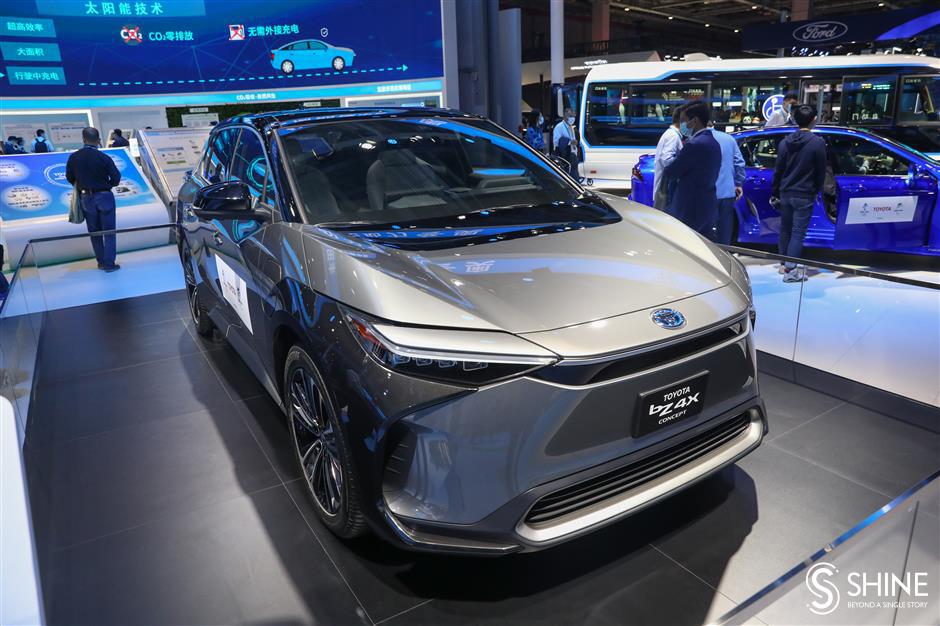 Toyota bZ4X Concept adopts Toyota's first BEV-dedicated platform based on its e-TNGA (Toyota New Global Architecture) program. It's also the first Toyota to be equipped with the one-motion grip system, where there is no mechanical connection between the steering wheel and tires with the lock-to-lock set at around 150 degrees. This eliminates the need to change grips when steering and thus reduces the burden on the driver for U-turn, garage parking and on winding roads. 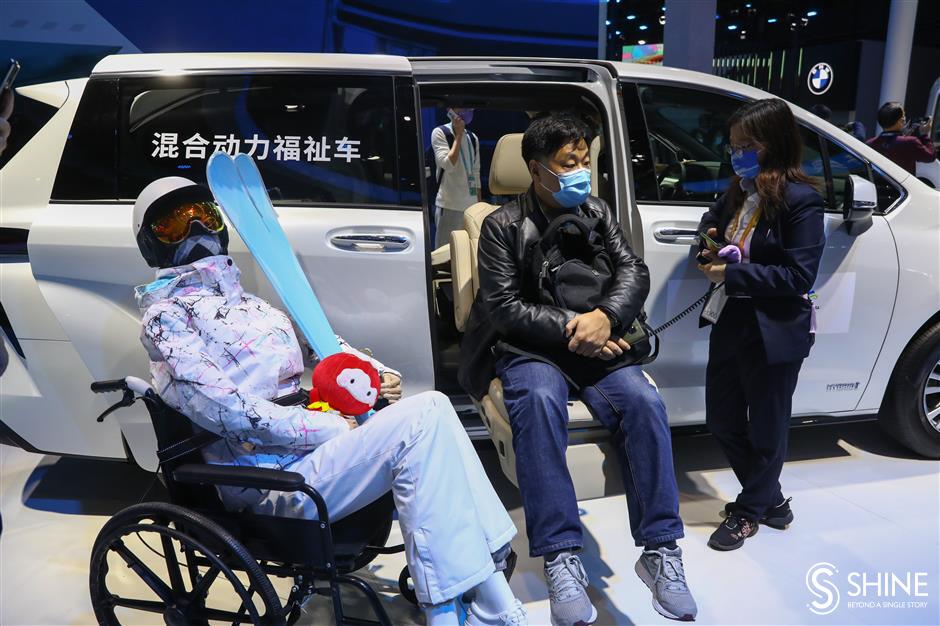 A hydrogen powered Coaster for the physically challenged from Toyota.

Manufacturers of race cars have been intensely working on the development of hydrogen-electric race cars, and Michelin, one of the flag-bearers of the campaign, obviously found the right occasion to stage its new electric hydrogen powered racing prototype off the Mission H24 program which was launched in 2018.

Marked with zero carbon emission, the car is also equipped with the company's new tires which are manufactured from 46 percent recycled materials. It will debut at the 24 Hours of Le Mans, an endurance-focused sports car race held annually, in 2024. 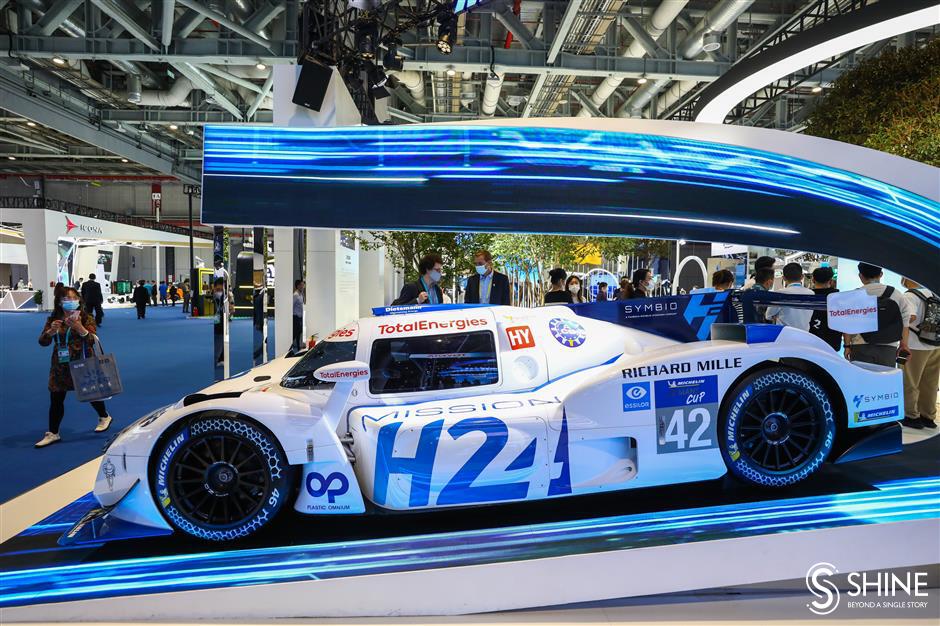 The Mission H24 is a race car developed by Michelin and partners which is entirely powered by hydrogen. Its four-stack hydrogen fuel cell powers four electric motors, creating a combined output of 653hp. This power, coupled with the car's lightweight chassis and aerodynamic features, give it a top speed in excess of 300 km/h, while allowing it to maintain the durability and handling performance expected of a high-level endurance racing vehicle.

Sharing the industry's outlook of emission-free mobility, Bosch, the German engineering and technology multinational, established a joint venture in China earlier this year with Qingling Motors to develop fuel cell systems. The first fleet of Qingling trucks with Bosch fuel cell system was handed over to a local logistics company in August.

The fuel cell power module in the Qingling trucks, manufactured locally with the company's latest hydrogen technology, is exhibited for the first time at this year's CIIE.

Hydrogen, with higher thermal efficiency than the internal combustion engine and zero emission, is considered to be the energy for a clean future primarily of heavy and long-distance transportation.

To address the concern for the safety of hydrogen power for vehicles, the company said it has set up strict testing standards in the design of spare parts, systems and software for such vehicles. 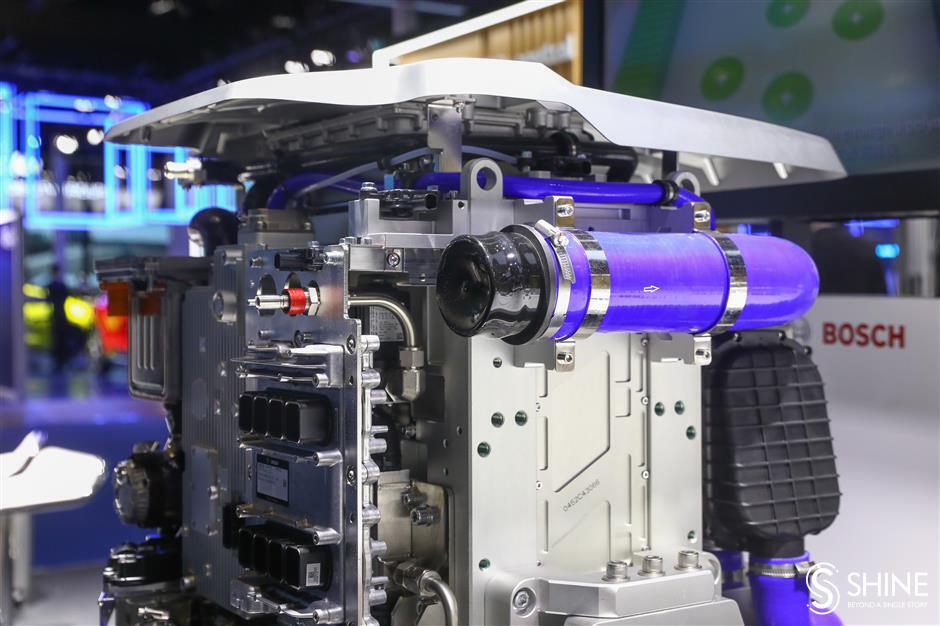 Faurecia, a French automotive innovator which aims to become a world leader in hydrogen mobility, has recently become one of the first companies to acquire production license of Type IV hydrogen tanks in China after the acquisition of CLD, a leading Chinese manufacturer of hydrogen tanks. Compared with the prevalent Type III tanks, the Type IV ones are both lighter and more durable.

The company presents a hydrogen power solution for a demo car at the CIIE this year, featuring a lightweight and compact high pressure hydrogen storage system and Symbio StackPack S. The solution has been applied to some heavy truck and light commercial vehicle models.

The company said it has met increasing interest from Chinese companies in its hydrogen solutions. 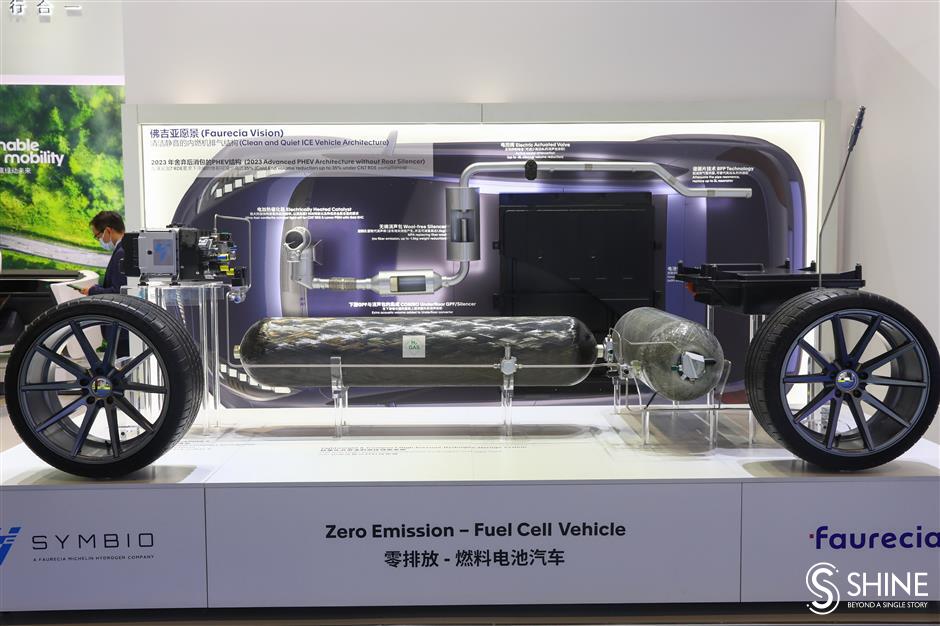 Tesla, a car maker which also delves into the renewable energy sector, primarily in harnessing solar power, presents its green outlook at the CIIE.

The company has recently opened two solar-powered charging stations with on-site power storage in Lhasa and Shanghai, its first such facilities in China. The two stations are on the map of its more than 1,000 charging stations known as the Superchargers in China. 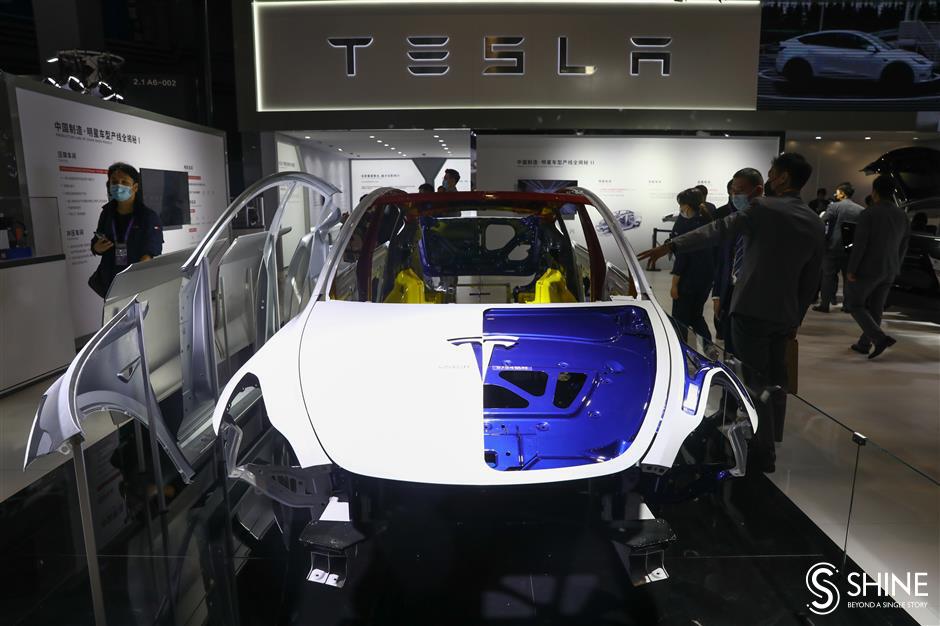 The body in white (BIW) from Tesla which is exhibited for the first time on CIIE.

Smart traffic technologies not only save travel time, but also reduce carbon emission in the entire traffic system through the reduction of congestion.

The intelligent vehicle infrastructure cooperative system C-2VX (Cellular Vehicle-to-Everything) of Ford will be incorporated into the smart traffic networks of nine Chinese cities, including Shanghai, by the end of this year, after successful tests of its compatibility with smart road infrastructures in those cities. Drivers of certain Ford models, including the Mustang Mach-E, will be able to be served under the system.

A similar solution of the company which was experimented with in the United States was exhibited at the CIIE last year. It drew great interest from the administrators of some Chinese cities, the company said. 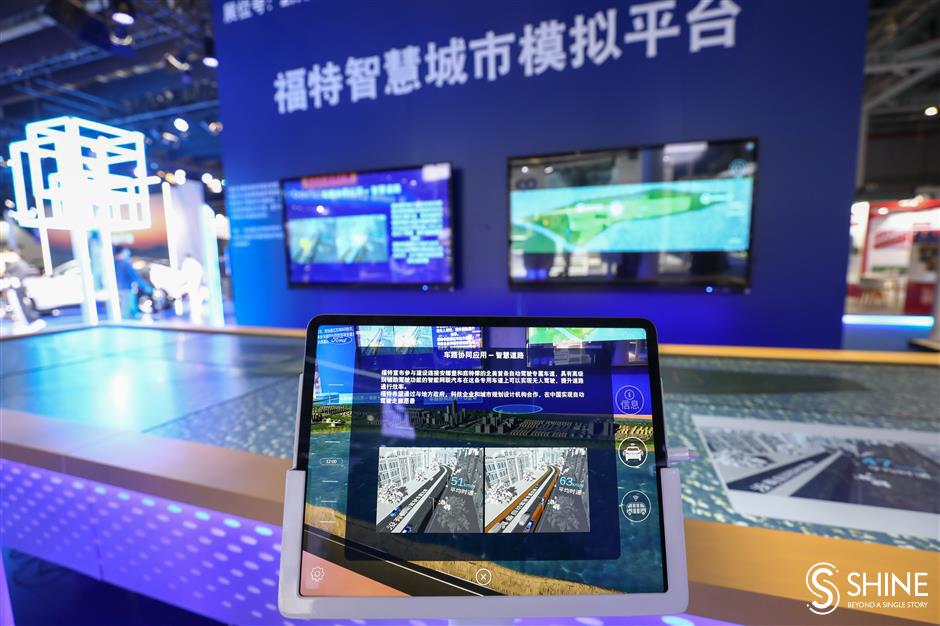 A future smart city simulated at the booth of Ford on the CIIE.