Ancient cultural practices and traditions on display at CIIE 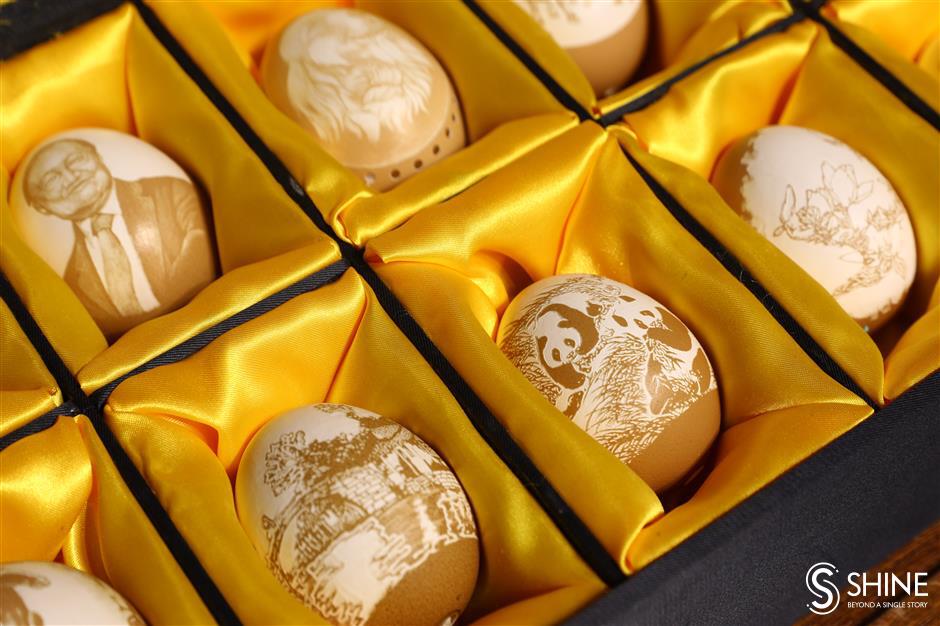 Eggshell carving works on display at the import expo

In a traditional-style "study room" inside the National Exhibition and Convention Center (NECC) Shanghai, where the fourth China International Import Expo is held, people are fascinated by a world of shining Chinese intangible cultural heritage.

With nimble fingers, ingenuity and innovation, artists show off their unique skills.

The intangible cultural heritage "living room" with typical Jiangnan (regions south of the Yangtze River) style features items from Shanghai that are renowned locally and nationally.

"With a cozy ambiance and immersive displays, it provides a unique window to promote traditional Chinese culture to the world," said Qian Zhangfan, an expert with the Shanghai Intangible Cultural Heritage Protection Center.

Inheritors of 13 items are displaying their skills at the scene. 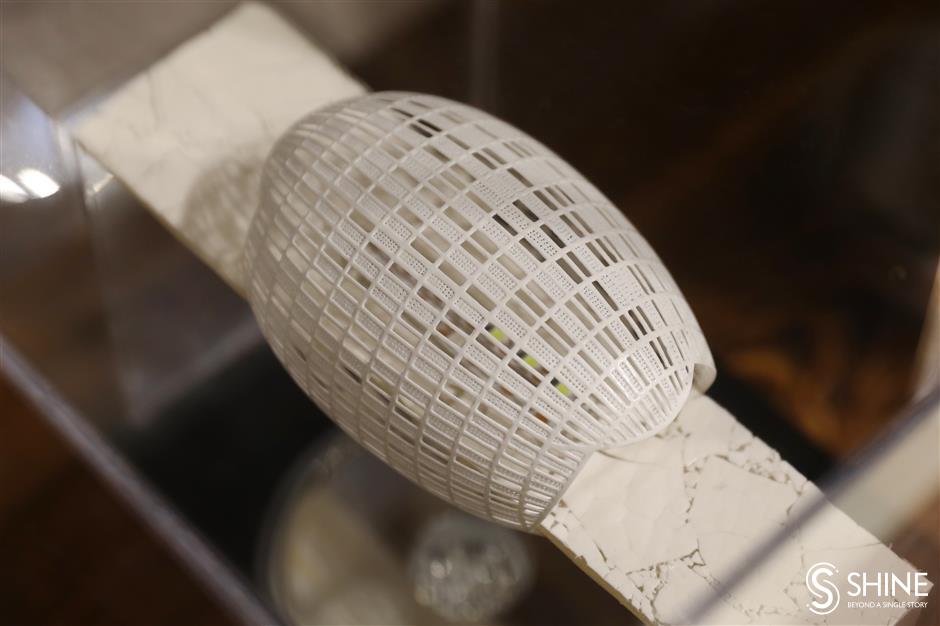 An eggshell carving work on display at the expo

The delicately carved eggshell artwork is among the most eye-catching and impressive displays. It replicates the signature egg-shaped structure in the Wujiaochang area of Yangpu District.

On an eggshell only 0.4 millimeter thick, Li Yafei, 58, a practitioner of eggshell carving, carved 960 small cubes and 1,200 small divots.

Li's eggshell carving works feature a wide range of topics such as scripts, animals and flowers.

Emu eggs and ostrich eggs are also among his materials.

Eggshell carving has been called China's "most fragile art." The skill of eggshell carving traces back to the Spring and Autumn Period (770-476 BC) in China.

It is an old tradition in China to present auspicious red-dyed eggs to relatives and friends in celebration of weddings or to announce the birth of a baby.

They drew patterns of flowers, birds and fish on eggs to lure consumers.

Through the years, the techniques involved in colorful eggs have improved. A commonly discarded item is turned into a stunning piece of art. 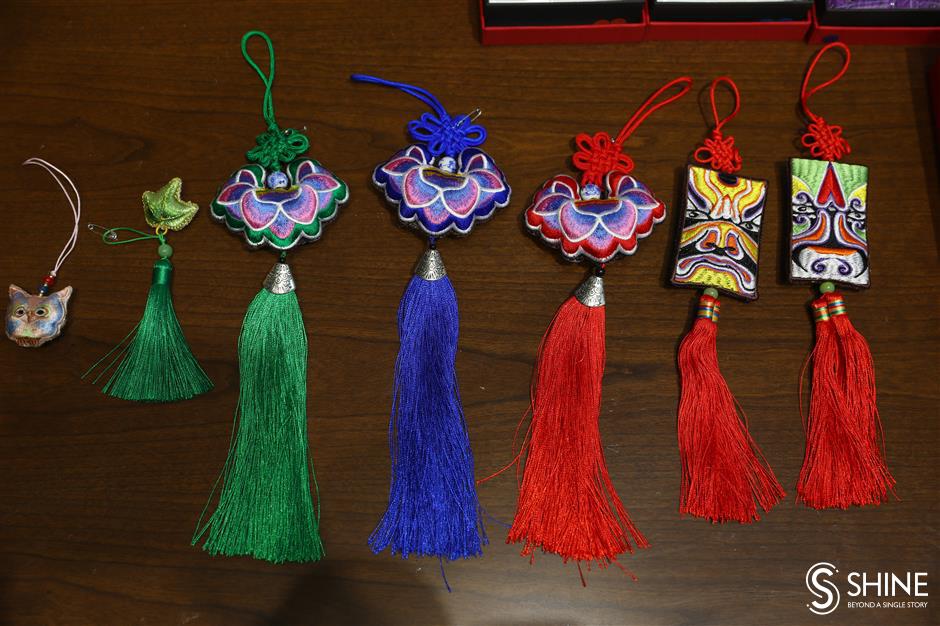 Sachets on display at the expo 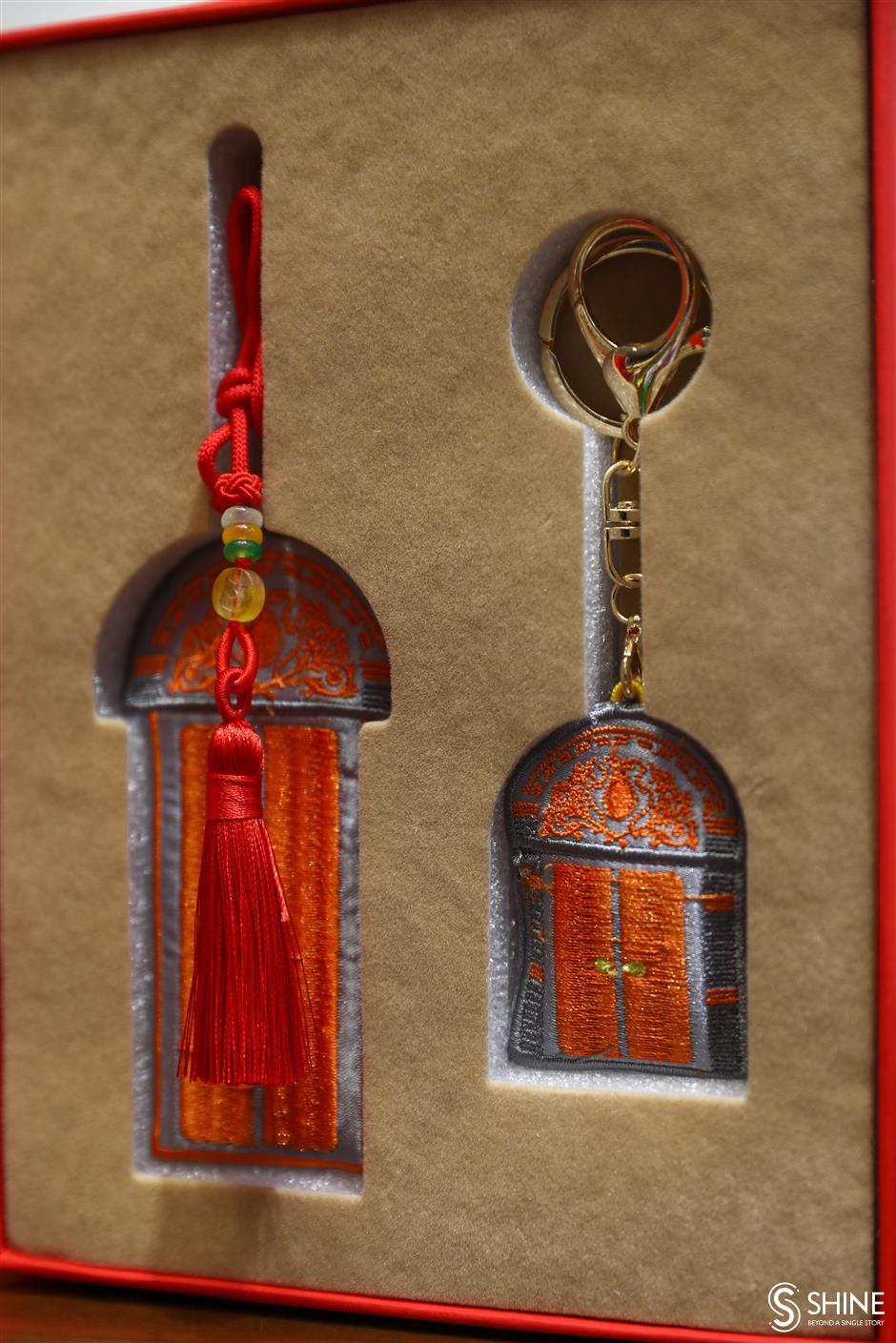 Fragrant sachets, or perfume pouches, were essential daily items in ancient times. They date back to the Warring States Period (475- 221 BC) and were used to guard against diseases.

In May when the plum rain season in Shanghai and the Jiangnan area (the area south of the lower reaches of the Yangtze River) prevails, ancestors used traditional Chinese medicine and herbs to fill sachets to repel insects, exorcise evil spirits and alleviate dampness in ancient times.

In Jiangnan, there is a tradition of wearing sachets during the Dragon Boat Festival in June.

Making sachets involves eight to 10 procedures, and it is a complicated process from cloth selection to pattern design. The thickness, texture and pattern of cloth are all taken into consideration.

A combination of embroidery and stitching is commonly used in sachet making.

Various fragrant powders with TCM applications represented by Yixiang powder are stuffed in a sachet, which has medical functions.

Auspicious patterns such as dragons and phoenixes are commonly incorporated into sachets as a way to wish for prosperity in the new year. 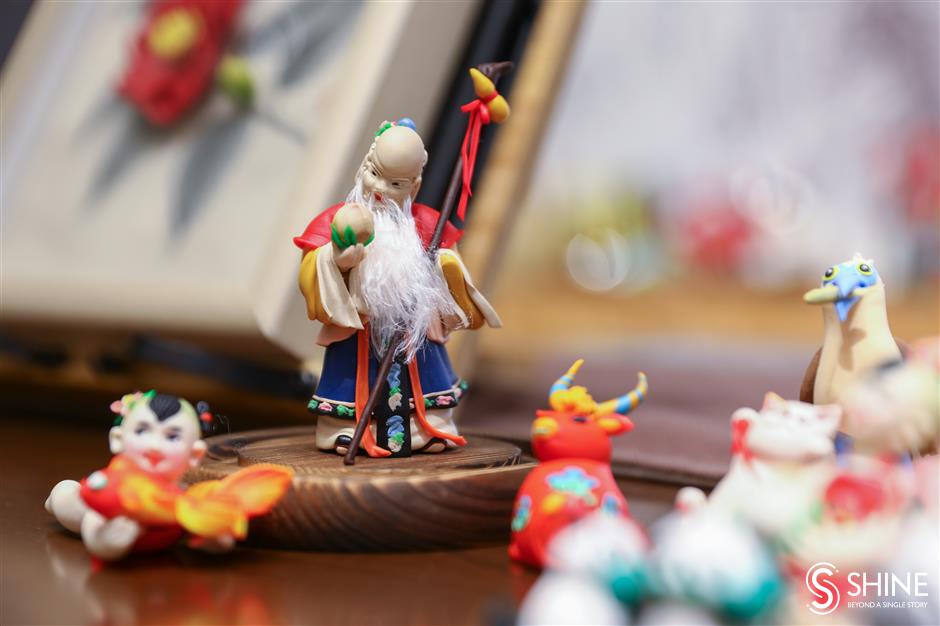 Dough-modeling works are showcased at the expo. A dough figurine of Jinbao, the mascot of the import expo, is shown. 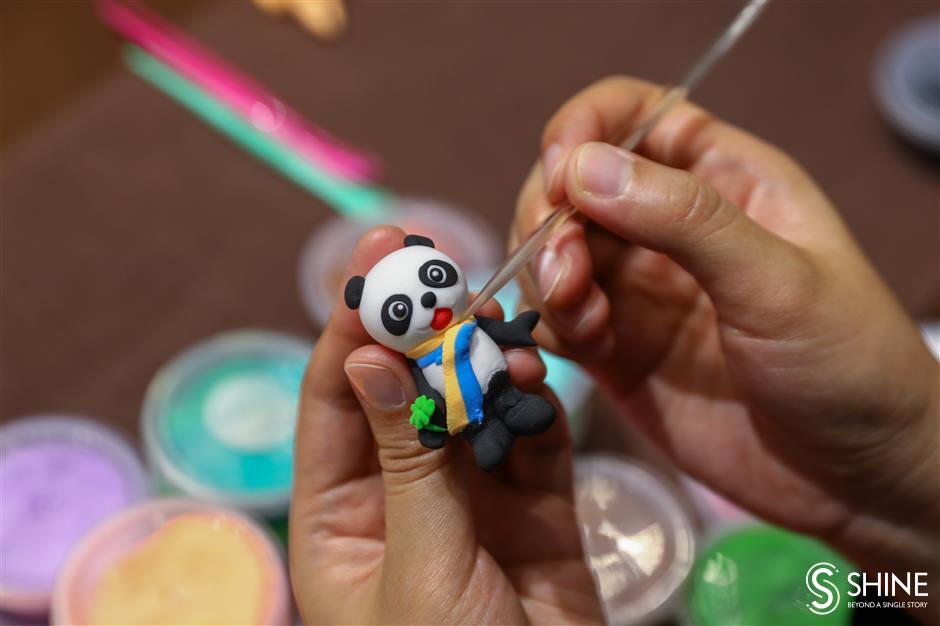 Kneading, rolling, twisting and pressing, Tang Jian turns a few colored pieces of dough into a lively figurine in a matter of minutes.

"The dough is mainly made of wheat starch, glutinous rice flour, and honey," said Tang, 37, a craftswoman who is among the third generation of Shanghai-style dough sculptors.

The folk art of dough sculpture can be dated back to the Han Dynasty (202 BC-AD 220) based on historical archives.

Figures made of dough once thrived in northern China, serving as offerings in religious rituals and as wedding gifts.

In the 1920s, the arrival of a group of dough craftsmen brought the folk art to Shanghai.

In the 1930s, Zhao Kuoming (1900-1980), who wanted to change the public's perception of dough sculpture, moved from Beijing to Shanghai. He is a representative of haipai dough modeling.

Zhao developed his own techniques to express the subtle facial expressions of dough modeled figurines and the texture of their clothing, and these techniques were passed to his apprentices. 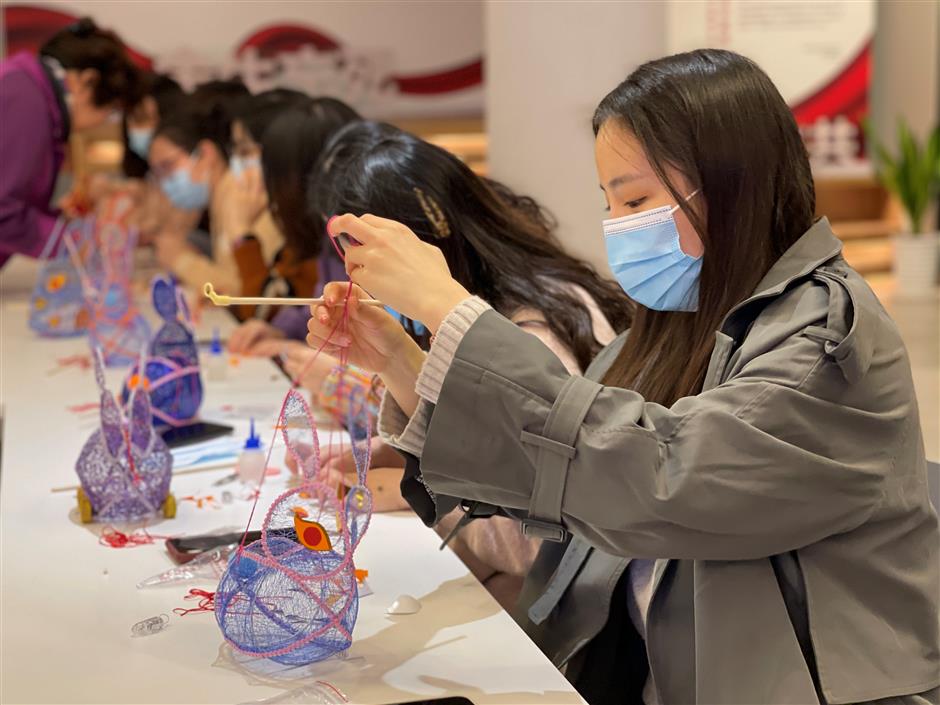 Dengcai, or colored lantern, has a history dating back to nearly 2,000 years ago. They originated from a traditional folk handicraft in China.

"The Shanghai colored lantern craft in modern times utilizes the traditional techniques involved in ancient colored lantern making, but the materials have been updated and the categories have been expanded, involving such as lanterns adorned with a revolving circle of paper horses and palace lanterns," said Gong Zhiyu, 41, a practitioner of Shanghai colored-lantern making.

Materials such as flax, silk and glass are used.

The He Keming dengcai, also called the Shanghai stereoscopic animal dengcai, is the pearl of Shanghai colored-lantern art.

Master He, known as the "Jiangnan lantern king," started making lanterns when he was 13. He broke the mold of traditional lantern-making and used galvanized wire twining around paper in replacement of traditional bamboo strips.

A number of vivid animal lanterns based on auspicious animals such as dragons, phoenixes, kylins and cranes were created with his exquisite skills and infinite imagination. 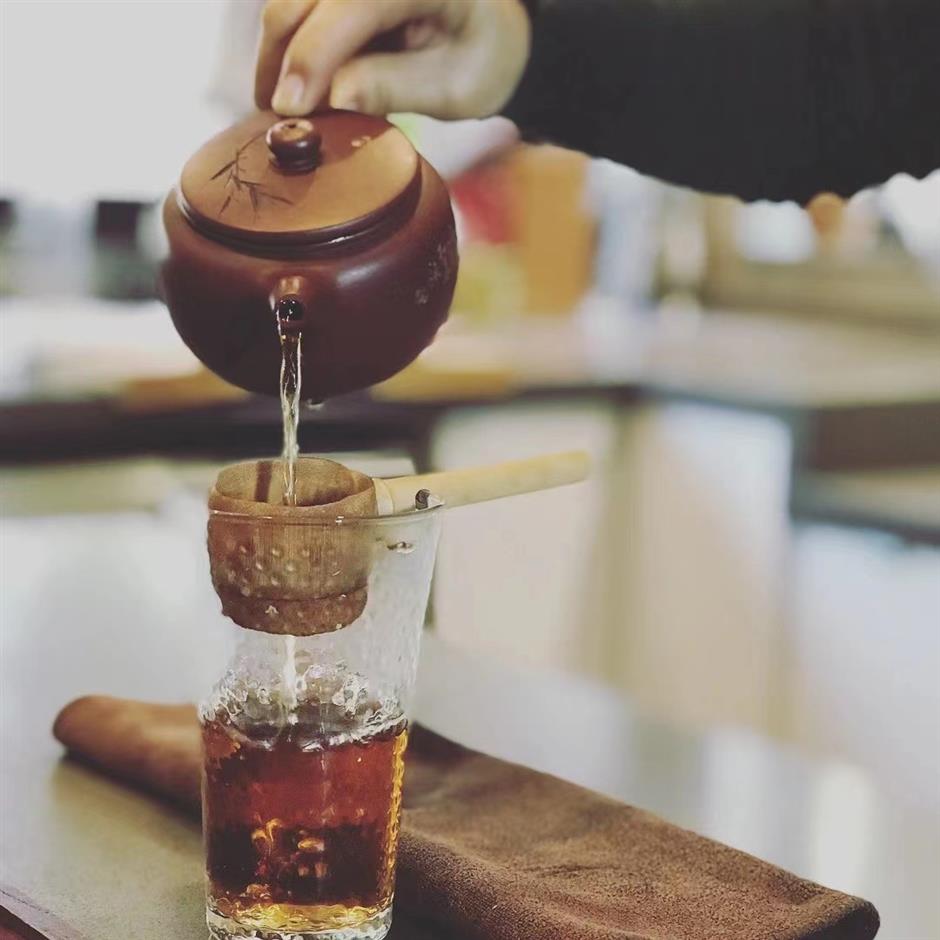 When spring tea is ready, staffers from Huxinting will visit tea plantations to collect the best tea.

The water used to brew tea is carefully purified, and tea served by Huxinting has a light fragrance.

Every year, the teahouse hosts several parties such as the Longjing tea party in spring, and Oolong tea party in autumn, and a tea ceremony and moon appreciation event during the Mid-Autumn Festival.

It is also the venue of the annual Yuyuan International Tea Culture Festival.

Visitors learn "Yi Jin Jing" routines during a practice session at the expo. 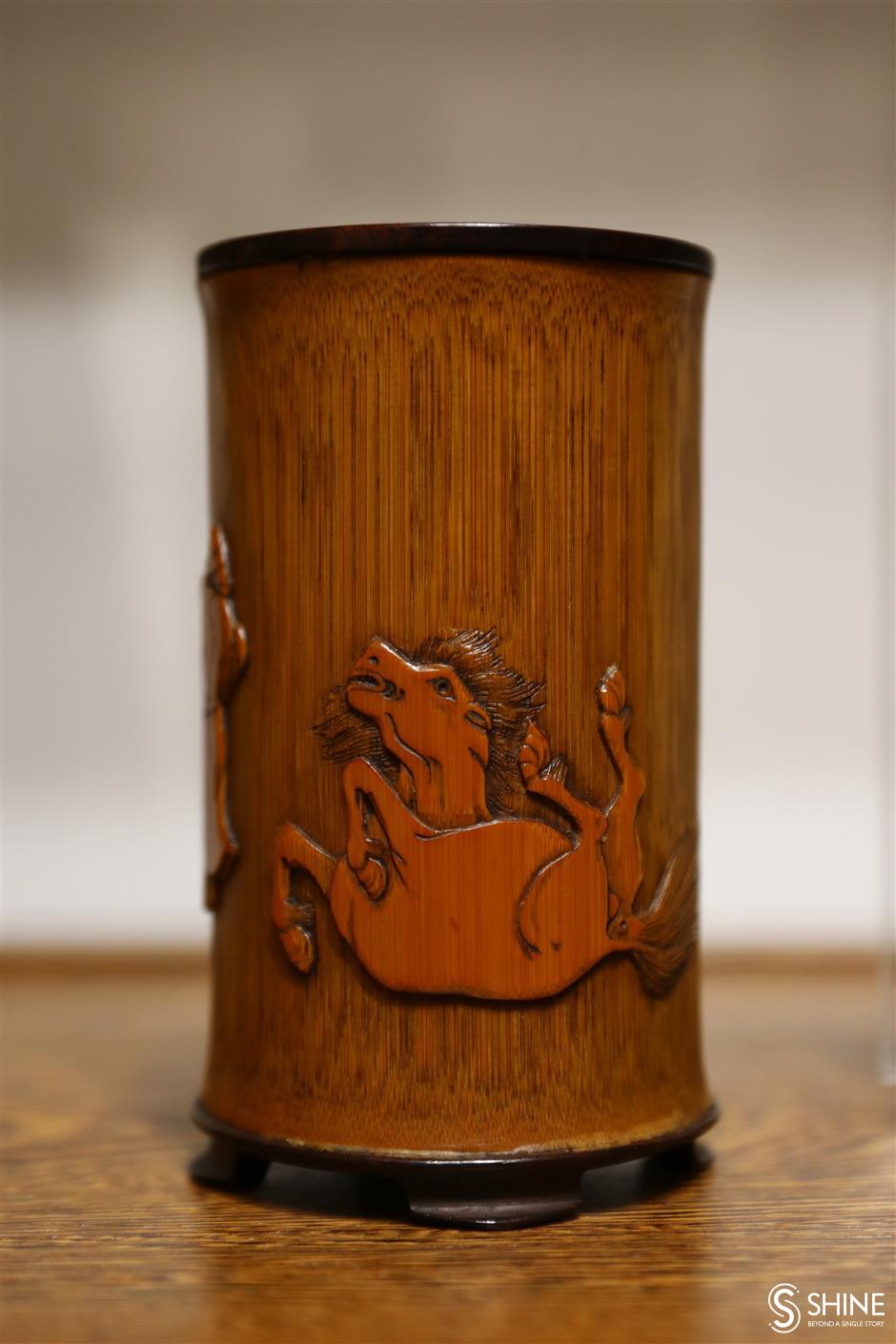 A pen container featuring the craftsmanship of Jiading bamboo carving

The sitting posture of baduanjin combines medical treatment, sports and nourishment to improve life quality and status. It advocates for sports and training to achieve the harmony of body and soul and has a significant impact in soothing and relaxing mind and body.

In China, one popular way to sustain one's health in winter is to take gaofang. It's an herbal paste made from condensed herbs and other ingredients. People strictly follow traditional practices to soak the herbs, boil them and dry the paste from generation to generation.

The traditional Chinese winter tonic is concocted from up to 40 different herbal medicines. In addition, foods such as lotus seeds, dates, and sugar may be added to improve the flavor.

The remedy is traditionally taken in winter to bolster health throughout the cold months.

As craftspeople show off their skills, a variety of intangible cultural heritage works are displayed.

These include the Cao Sugong ink-stick, a Zhenru straw patchwork with a blend use of wheat straw and embroidery, a paper-cut work titled "Zhuanqiao Impression" replicating the former Zhuanqiao Old Street before the 1970s, which experienced an urban renewal later, and a pen container with a horse pattern featuring the craftsmanship of Jiading bamboo carving.

In the long history of Chinese bamboo-carving, works by Jiading artists reflect the spiritual strength of the Chinese literati and make Jiading bamboo-carving an exclusive art form.

Jiading bamboo-carving can be traced back over 400 years. Craftsmen in Jiading integrated multiple artistic forms, including calligraphy, painting, poetry and prose, to give new life to bamboo.

About 10 basic techniques are involved in Jiading bamboo-carving.

Shanghai boasts more than 250 city-level intangible cultural heritage items and more than 400 at the district level. There are 54 at the national level. 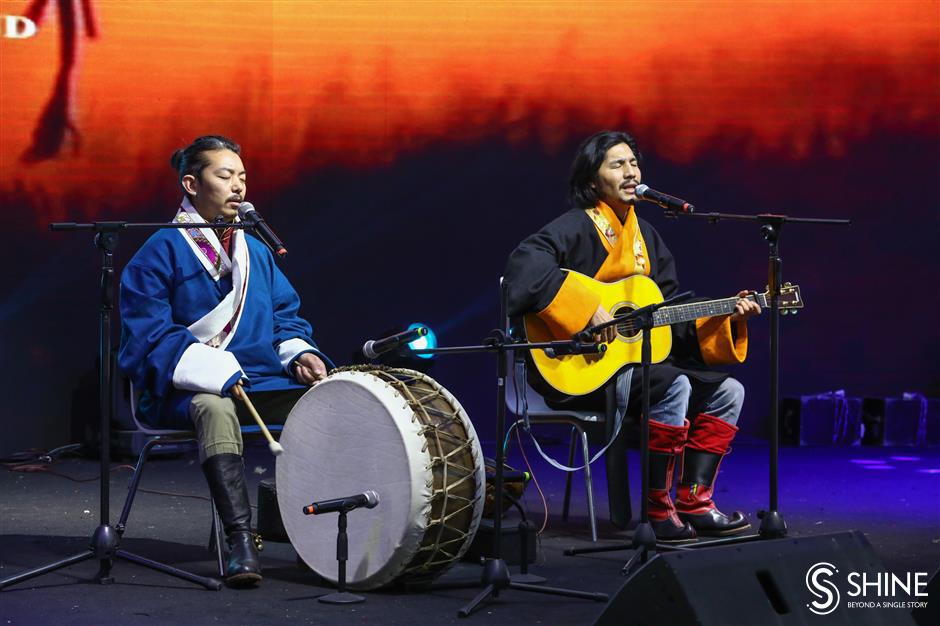 Tibetan artists perform at the expo.

The China International Import Expo not only offers a platform for trade but also opens a window for cultural exchange.

During this year's expo, about 70 performances such as dances and dramas are being staged, showcasing the gems of intangible cultural heritage and folk art from the snow-covered plateau in Tibet to the poetic and picturesque Jiangnan region.

For the first time, inheritors and folk artists from southwest China's Tibet Autonomous Region are staging five performances at the expo. Among these, three of the dances are considered to be national-level intangible cultural heritage relics.