Long-term survival not a 'dream' for cancer patients

The five-year survival rate of patients at Shanghai Cancer Center is 71.3 percent and is in line with leading Western facilities such as the US-based MD Anderson Cancer Center.

The strategy of cancer treatment has also changed from simply prolonging a patient's life to improving health management and life quality, said officials from Shanghai Cancer Center, a top cancer facility in China.

"With the development of surgical skills, targeted medication and precise radiation therapy, cancer is no longer such a fatal disease as before. The high survival rate has showed that many cancer patients can live long," said Dr Guo Xiaomao, president of the hospital, which celebrates its 90th anniversary on Saturday.

For late-stage patients with some types of cancer like prostate cancer, over half of them can have long-term survival after appropriate management, he said.

"Long-term survival is not a 'dream' for most cancer patients. If cancer is detected in the early stage and they undergo proper and timely treatment, the majority of patients can be cured," he said. 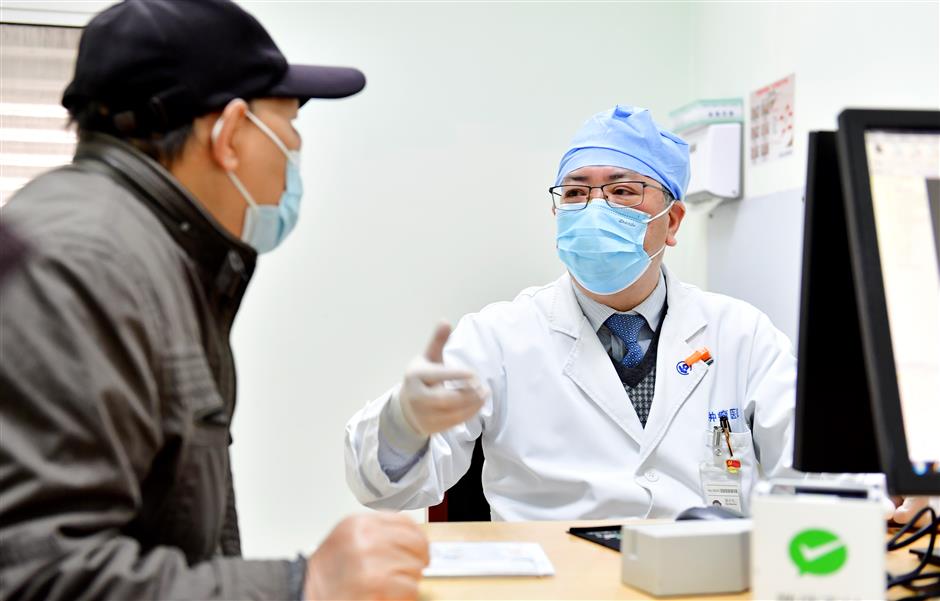 Dr Guo Xiaomao, president of Shanghai Cancer Center and an expert on radiation oncology, talks to a patient. 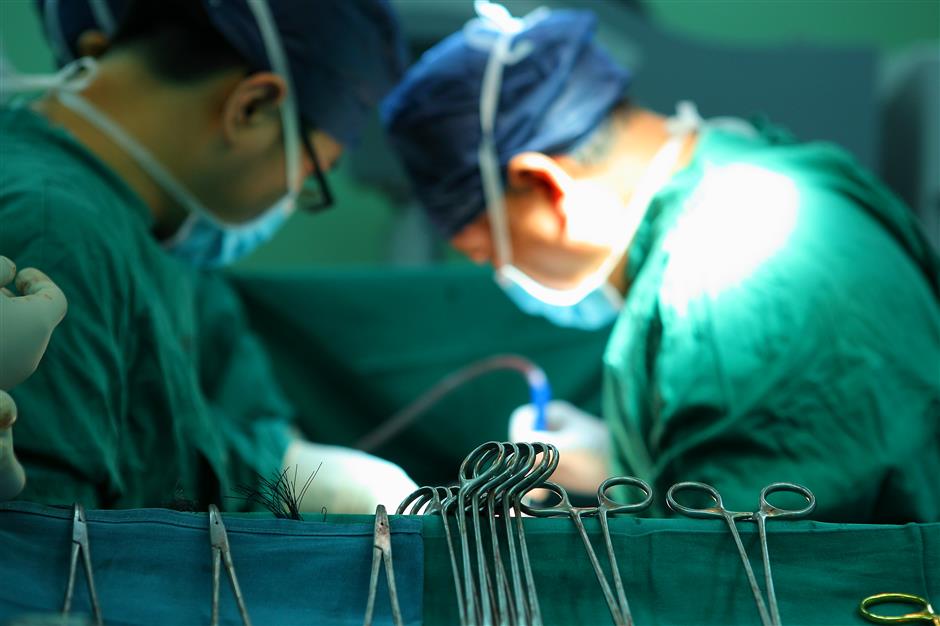 Early screening, precise diagnosis and multidisciplinary treatment and care are major weapons against the disease.

At Shanghai Cancer Center, patients with one certain type of cancer are treated by a team of medical experts from different departments.

"While starting the treatment, each patient is given a list to guide them through each step in the process and help them make reservations," Guo said. "They will be very clear about what they should do and which treatment they will receive in the future.

"It also greatly reduces their anxiety and worry," he said. "When each step is clearly explained and well under control, patients are likely to better cooperate with doctors and get better treatment effects."

The cancer center has streamlined its medical process through intelligent systems, Internet services and technology innovations.

It teamed up with United Imaging, a Shanghai-based medical equipment company, to develop the world's first machine that combines positioning CT scanning and radiotherapy through AI technology.

The "all-in-one" radiotherapy solution is able to shorten the treatment process from days to just over 20 minutes. All procedures for radiotherapy preparation and treatment are done on one single bed. AI technology achieves automatic positioning and automatic radiation dosage calculations, which saves a lot of time.

"After talking with the psychologist at the hospital, I have stronger confidence in my recovery and can sleep better now," said a female patient surnamed Zhou, a six-year colorectal cancer patient recently diagnosed with liver metastasis.

The hospital's social work department has also set up the nation's first hotline to help cancer patients and their families and organize various psychological and legal help programs. 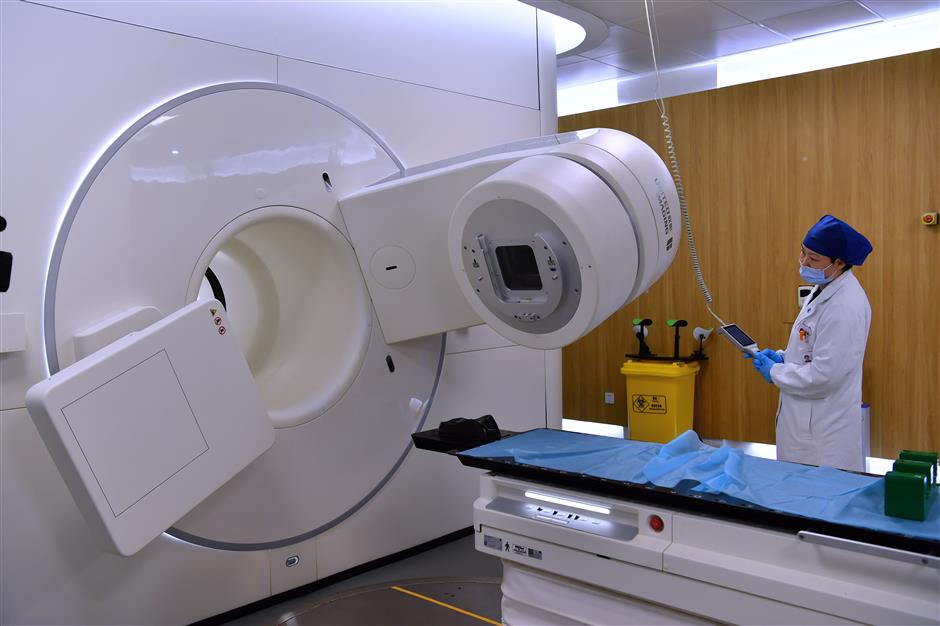 With artificial intelligence technology, the world's first "all-in-one" radiotherapy solution has been introduced at Pudong branch of Shanghai Cancer Center.

Being a leader in cancer diagnosis and treatment in China is not the ultimate goal of Shanghai Cancer Center. It is thinking about something bigger.

The hospital has announced it will apply for the title of National Cancer Medical Center and has started preparation, including establishment of an individualized and whole-process precise cancer screening, diagnosis, treatment and rehabilitation network.

This will be tailor-made for Chinese patients on proton and heavy ion radiation therapy as it is runs the nation's only proton and heavy ion medical center. The hospital will also establish a nation-level complicated disease pathological diagnosis center, and contribute to the enhancement of cancer-related equipment and new drug research and development through cooperation with pharmaceutical and high-tech companies.

"Compared with world-leading cancer facilities like MD Anderson, the biggest gap between us is research investment and ability. Though our clinical capability has been in line with them, we lag behind in technology innovation and new drug research," Guo said.

"Our advantage is a large patient data. We plan to make some breakthroughs in three to five years by making better use of our patient resources and enhancing research abilities through research bodies like the Precision Cancer Medicine Center, a genome-sequencing database, and the new laboratory animal science center for advanced cancer research such as tumor immunology, tumor metabolism, targeted treatment, drug evaluation and genetic function." 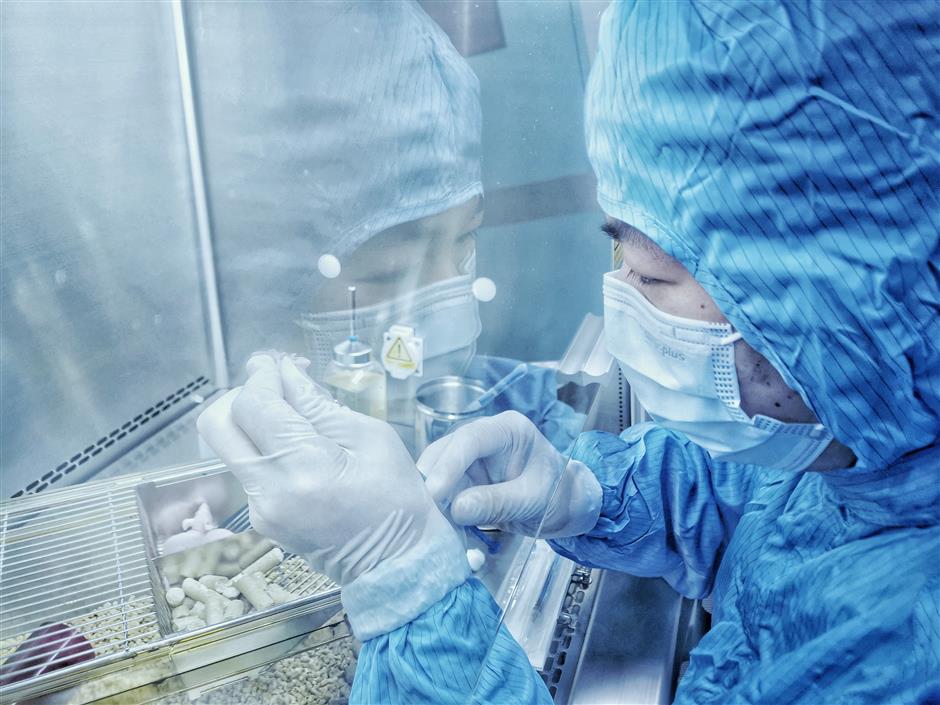 A professional conducts an experiment at the animal science center lab of Shanghai Cancer Center.