Ma Yinhong became a model when she was 54 and then an Internet celebrity at 59, which is rare even in the West.

She was the eldest model at this year's Shanghai Fashion Week.

"I feel that people's aesthetic criterion is getting more and more tolerant," she said.

"In the past, there were always young pretty girls being picked for filming a commercial. But now, the models can be different, they can be old and they can have weight. I think they are all beautiful, and the definition of beauty is becoming broader."

Ma posted her first short video on Douyin, the Chinese version of TikTok, in March last year. In the video, she walked her Bichon at the Changning Raffles City wearing a brown overcoat, jeans and a colorful hair band. She ran and jumped with joy, and acted just like a young girl.

She knew that her videos would go viral because there's no model of her type on Douyin.

Then her fourth video became a "blockbuster" with nearly 140,000 likes, in which she wore a camisole and long gauzy skirt with boots. A comment under the video said "wishing Chinese women wear whatever they want as soon as possible."

Forty years ago, Ma was an apprentice at the candy workshop of the former Shanghai Huimin Food Factory. However, three years later, before she became a regular worker, she quit the job because she didn't want herself to be like the candy on the production line, which seemed pretty but was arranged by others.

Ma models overalls and vest with a cowboy hat.

She then worked as a clothes retailer on Huating Road, downtown Shanghai, in the mid-1980s.

"I always had a sense of fashion," she said. "I once sold a 'Paris coat,' which was kind of faddish. At that time, I stocked vintage clothes from Guangzhou. I was infatuated with it at first sight. It had shawl collar, tight upper part and large lower hem. If one wearing it goes round, it's like a blossom."

Some other retailers wanted to copy it but they failed to make such clothes.

Later the Aijian Garment Factory sought her for cooperation but she didn't have enough energy to do so.

When she felt that she would live like that her whole life, one day, she saw a foreign woman walking across the street near Huaihai Road M. and Changshu Road. The woman was in black, with short hair, long scarf and a cigarette in her mouth.

In those days it was rare to see a foreigner in Shanghai so people stared, but she just ignored them.

"At that moment, I knew what I wanted," Ma said. "No matter what I do in the future, I will always be cool like that."

Before long, there was a trend for the Shanghainese to go to Japan. To make more money to raise her daughter, Ma followed her elder brother to the foreign land and worked hard to attend the best clothing design school. 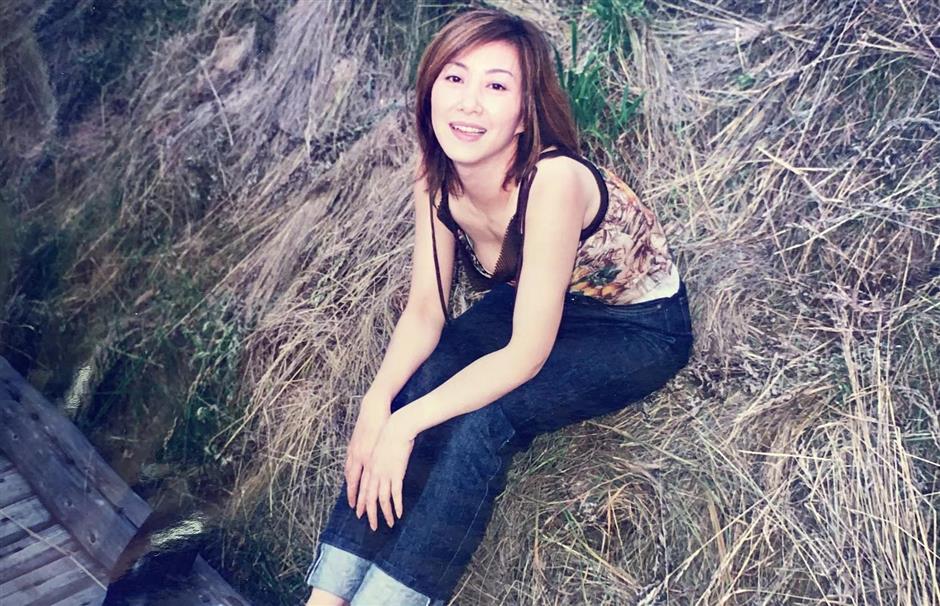 When Ma was 36 in 1998, she was a big fan of iconic designer Jean Paul Gaultier.

At the age of 36, she played a nightclub worker in well-known Japanese director Shunji Iwai's film Swallowtail Butterfly.

"I always had a dream to stand in front of the camera," she said.

"After the film, which brought me a gratifying experience, I thought everything would come to an end. But one day, I read the autobiography of Colonel Harland Sanders, founder of Kentucky Fried Chicken. I learned that he started his business at the age of 65. So I think if I dream the dream, it will possibly come true one day."

Ma returned China in 2002 and decided to settle down in Shanghai.

"Many things, they are not coincidences but the inevitable," she said. "After I came back, I took many photos, which were posted on my daughter's WeChat Moments. Then her friends asked me to be the model. It's like that what I love attracted the opportunity."

At the very beginning, she was not used to modelling.

"For professional models, they know the skills like how to move or place their limbs and body naturally," Ma said. "I had no idea about that and my posture was a bit dull. Then I observed and imitated them. The second time, I was able to make the movements."

To be prepared for being a model, she went to the gym.

When she was 54, she participated in the filming of advertisement of a famous domestic clothing brand and started her career.

Sometimes she had to stay up very late for the photographing and almost have no time to sleep.

"Once a work continued through 4:30am and the staff praised me for my hard work and dedication," she said. "I answered that I can remain in good condition because I love this job."

A series of photos where she wore clothes that showed her belly flab drew online criticism.

The way of being a model is not always smooth. But all the challenges made her mind stronger.

"Once I joined the photo shoot of a magazine," Ma recalled. "They told me to stay there silently and be cool. However, later they asked me to try smiling to the camera. Then I smiled but felt very embarrassed because when I smile, the wrinkles will appear on my face. They stopped me and told me not to smile.

"In another magazine shoot, they needed an elder model who had wrinkles. They thought I was not old enough but I asked them to have a try about my smile.

"I went there to strive for an opportunity so I wouldn't give up easily. I said I can smile for you or you can take a picture of my smile. Finally, they used my picture."

Ma said that experience made her understand that she should never compare herself with young models.

"On many occasions, they need me to show the charm of a woman at my age," she said. "So what I should do is to be myself and since then, I never fear my wrinkles and can have either a light smile or big smile in front of the camera. I recognized that my smile has its own charm."

In the past few years, she had participated in the commercial photographing of many big-name brands from home and abroad.

These experiences show a trend that people now are willing to accept imperfections than before. That means more and more people dare to accept the way they are.

For an underwear advertisement, she and other five models were not in the shape of super model but represented six different stages of womanhood.

"It aims to tell women to face their real selves," she said.

But sometimes she still faces spite and bias from netizens.

Under a posting of her account on lifestyle-sharing platform Little Red Book, a netizen criticized her for bringing disgrace on her daughter with a series of photos in which she wore a vest and long skirt which showed the flab of her belly.

"Some commented that a woman at my age should not wear things like backless clothes," she said. "I ignored those voices and believe I will always do the thing I want instead of following others' thoughts.

"If you follow them, then you will lose yourself. I dress only for pleasing myself. Even if you say I'm not looking good in those clothes, I will still dress like that. I can dress in anything depending on my mood and the occasion."

She knows that in the West, there are many older models and fashion influencers.

But she said she has never been affected by any of them.

"I don't take anyone as the model," she said. "I'm the model of myself. If I get to 80 and the brands still want to take photos of me, I will be happy to be their model."

Although Ma said she never considers that she will change anybody, many people changed after learning of her experiences and viewing her pictures and videos.

"Many people told me that they are no longer afraid of getting old and having wrinkles and some even dyed their hair white like me," Ma said.

"But I want to tell those saying they want to live a life like me when they are old, they should also be strict with themselves on things like body shape when they are young."

For young women, Ma suggested that they should find work they like and suitable for them.

"Everyone has different personality and things that they're good at," she said. "Doing a job they like can make them exert themselves to the most."

"I will be young forever and always pursuing my dream. I will spend my time on the things I love, like filming videos, being a model and making clothes." 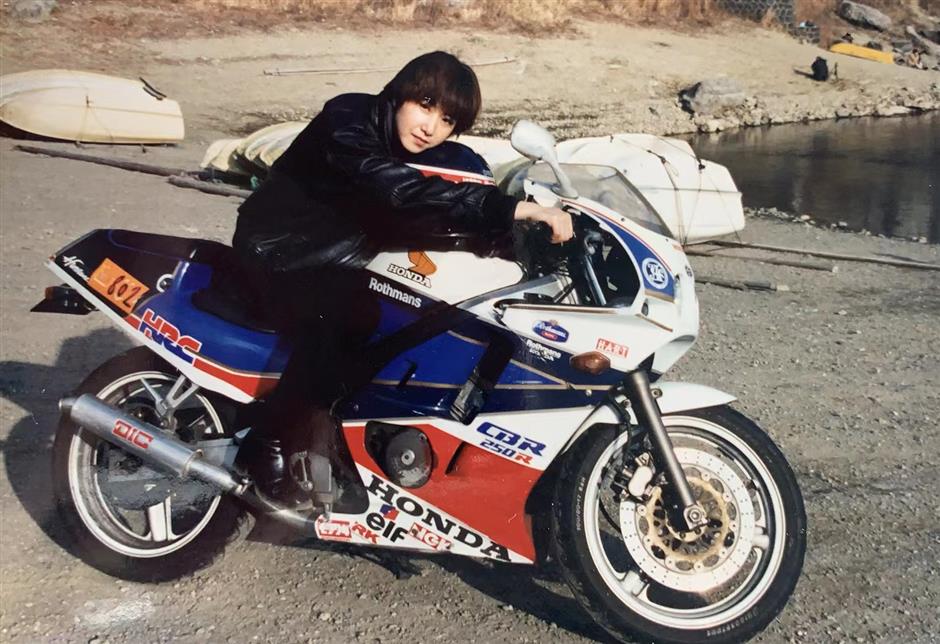 Ma was a bit of a rebel when she was young. She rode a motorcycle in 1989.