Master launderer the byword for washing and dyeing industry standards 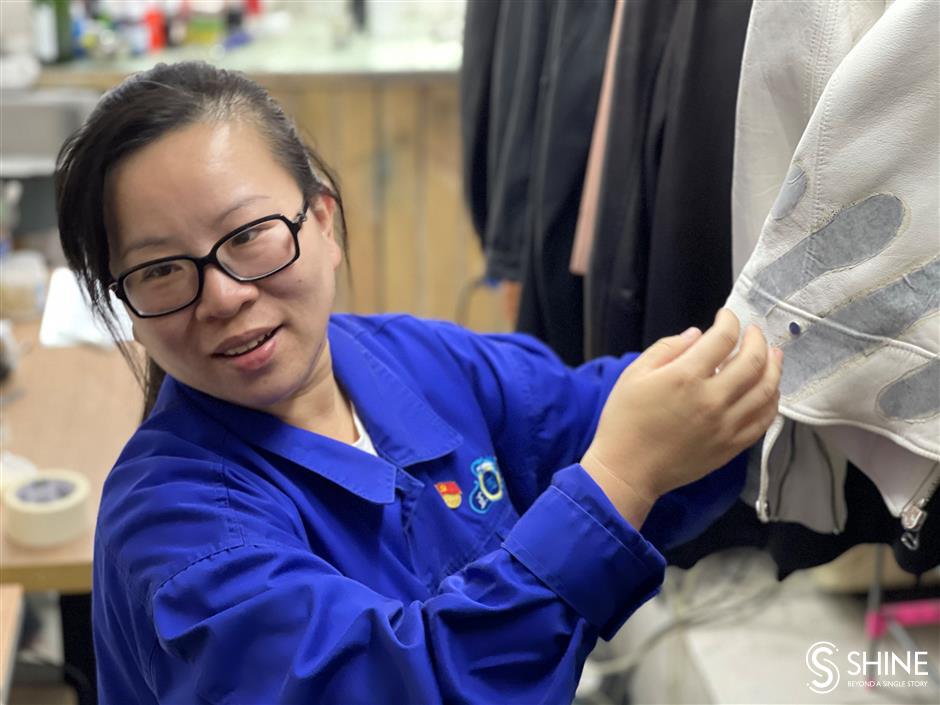 Chen Aihua, China's only "master technician" in the washing and dyeing industry.

Every profession produces its own foremost expert. And Chen Aihua, a specialist at a Shanghai laundry company, has become that person, a technical master, in China's washing and dyeing industry.

Chen, 44, joined Zhengzhang Laundry Co, a local time-honored brand, as a laundry worker when she was aged 19. She is now technical director of the firm and operates a studio named after her in downtown Huangpu District.

The "Master's Studio" on Zhongshan Road S1 handles the most difficult or important washing and restoration tasks for clothes and bags.

Chen, dubbed the city's top laundry master, can not only remove stains on clothes, but also restore original colors with her unique technique and dyeing method.

"I never think laundry is a great job, but since it is my job, I ask myself to do the best," said Chen.

She has won numerous awards for her innovations and contribution to the laundry industry, including being recognized as a "Model Worker" of Shanghai and China. She also has been honored with a subsidy from the State Council, the nation's Cabinet, which is usually awarded to top-level scientists or art masters.

After graduating from a local vocational school, Chen was assigned to work in the flagship store of Zhengzhang on bustling Huaihai Road in 1996. She learnt various techniques in laundry, ironing, packaging, quality inspection, repair and leather maintenance from every senior technician in the company.

She regularly practiced each process hundreds of times, and was often scalded by the steam. 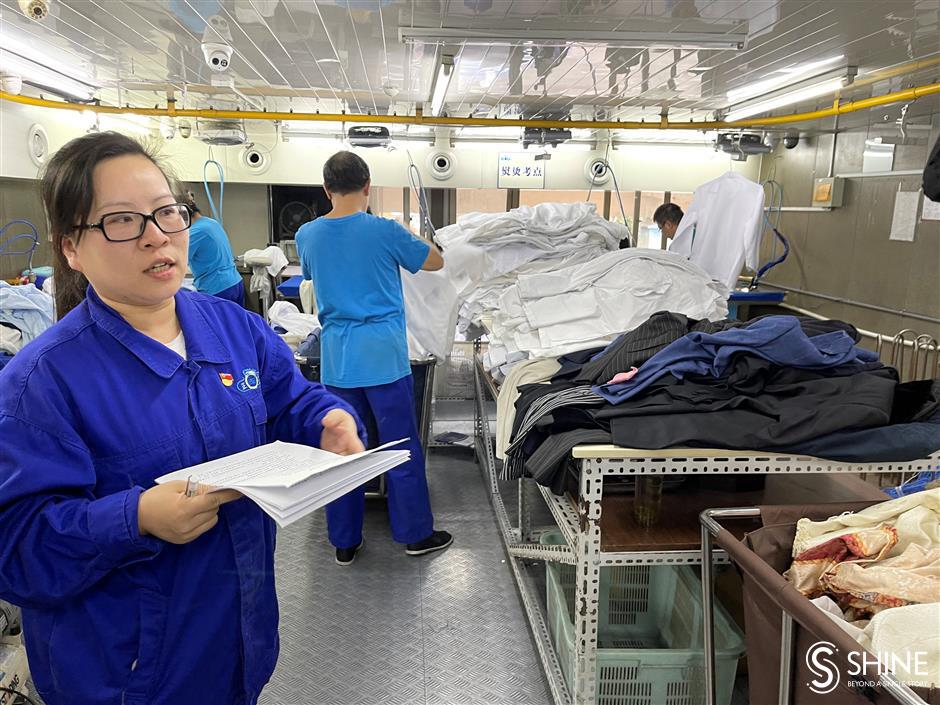 Chen Aihua checks a schedule in her laundry studio in Huangpu District.

Her endeavors were eventually appreciated by the company which promoted her in 2003 to be manager of a new outlet on Dapu Road in Huangpu. She introduced a strict laundry procedure involving 88 steps for every item of clothing.

"All clothes have a special meaning to the owners, otherwise they would not bring them to the laundry," Chen said. The outlet became the company's most popular laundry shop, with the highest business volume of all its chain stores.

Many years ago, Chen restored a silk cheongsam for an 80-year-old customer who had worn it for her wedding some six decades earlier.

After being stored at the bottom of a suitcase for decades, the color of the red cheongsam had largely faded and some of the trimmings and gold silk were gone.

The senior woman said it was her most treasured item and she wanted to wear the wedding dress for the last time.

Chen took over the challenging mission and spent nearly a month fully restoring the dress. She did over a dozen laundry treatments to remove stains and repair the aged sections. She also went to Haining in neighboring Zhejiang Province to find similar replacements for the lost trimmings which were made with traditional techniques half a century ago.

The customer wanted to reward Chen for her efforts to restore the cheongsam, offering a gift of 20,000 yuan (US$3,136), but she declined. "It was a large sum of money some two decades ago, but the experience was far more important to me than the money," she recalled. 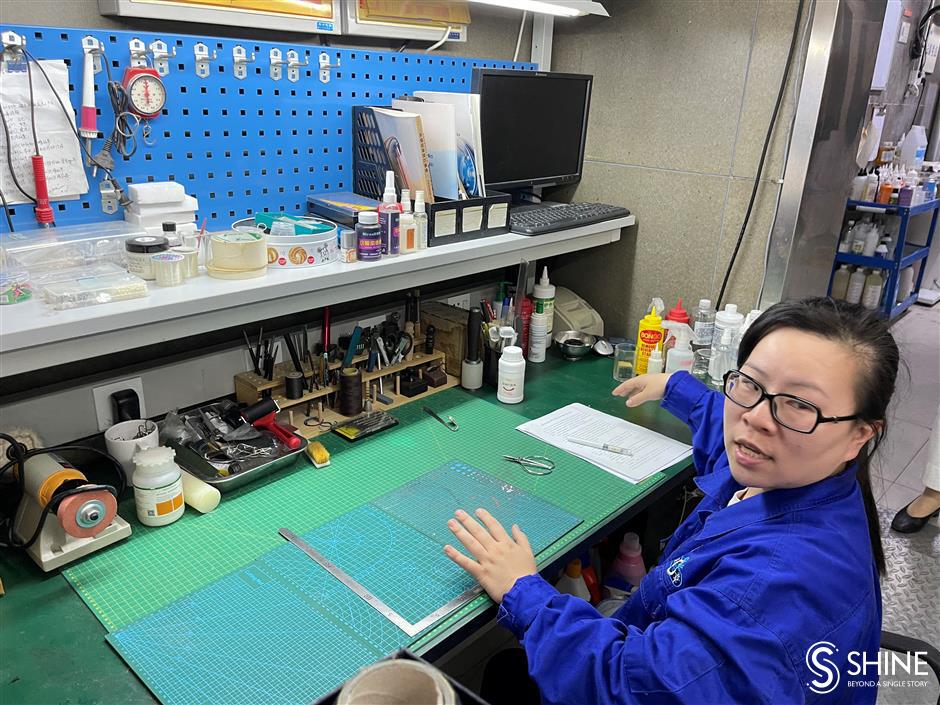 Chen Aihua sits at the work desk where she plans clothes dyeing and restoration.

Chen was assigned to take over the company's most challenging task in 2010. During Shanghai World Expo, she led a team to wash and maintain the clothing items of overseas guests, many of which were made from rare fabrics.

Later, Chen was assigned to manage the ironing of national flags used during the Conference on Interaction and Confidence-Building Measures in Asia (CICA) in 2014. It was a challenging task, because no creases were allowed, no flag could be taken outside and there was no backup flag.

She guided two of her apprentices in using traditional irons to press each flag. The temperature had to be held at 120 degrees Celsius to avoid burning the flags and they worked three days to finish ironing all 108 national flags.

New challenges came in 2018 during the 1st China International Import Expo (CIIE) when Chen took charge of the laundering and ironing of clothes for national leaders, provincial officials and their entourages during the event.

Tailored washing and ironing techniques were needed to deal with clothes made of various fabrics from difficult countries and regions. Each item had to be washed and ironed within four hours under the gaze of security guards.

Chen again developed customized laundry plans for the clothes and completed her mission. Some leaders and officials praised her laundry service. 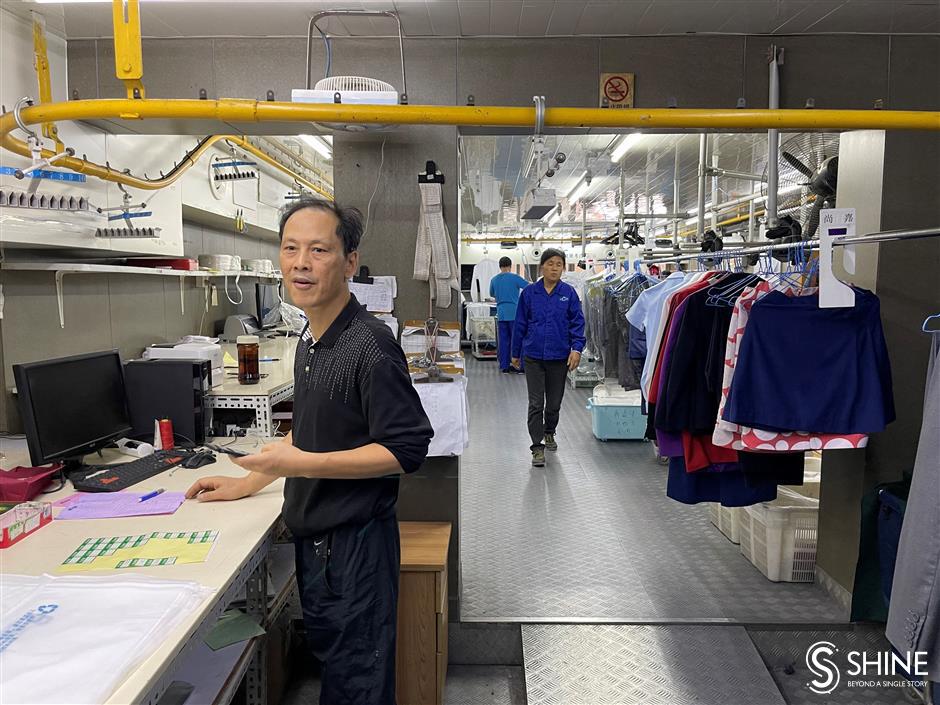 Chen's studio has invented 45 laundry or ironing techniques and optimized over 100 traditional measures. She has led the compilation of over a dozen textbooks for other laundry companies and developed a bank of questions for a national vocational qualification test.

Her studio has also cultivated three senior technicians and four specialists. They wash over 30,000 clothing items every year, a third of which are for important missions such as CIIE.

After the outbreak of the coronavirus pandemic, Chen received another special task to wash and disinfect the large amount of uniforms and raincoats for front-line police officers working at highway entrances to the city. No other laundry company was able to take over such an urgent and risky task.

Chen selected six key members of her studio to take over the mission. She firstly imposed a strict COVID-19 prevention measure as well as washing and disinfection procedures. Due to the lack of protective gear at the start of the pandemic, she led team members to make "hazmat suits" for themselves from old down coats.

Under her leadership, the team finished washing and disinfecting over 500 uniforms for 13 traffic police teams. The officers inspecting the entry of vehicles into the city were able to wear clean and safe uniforms thanks to Chen's efforts. The city's traffic enforcement team wrote a letter of gratitude to her company.

After work, Chen also serves as a volunteer at her neighborhood. During the peak period of the pandemic, she stood at the entrance of her community to check the health codes and temperatures of residents.

"I like dealing with clothes because every item has a story and needs to be understood," she said. 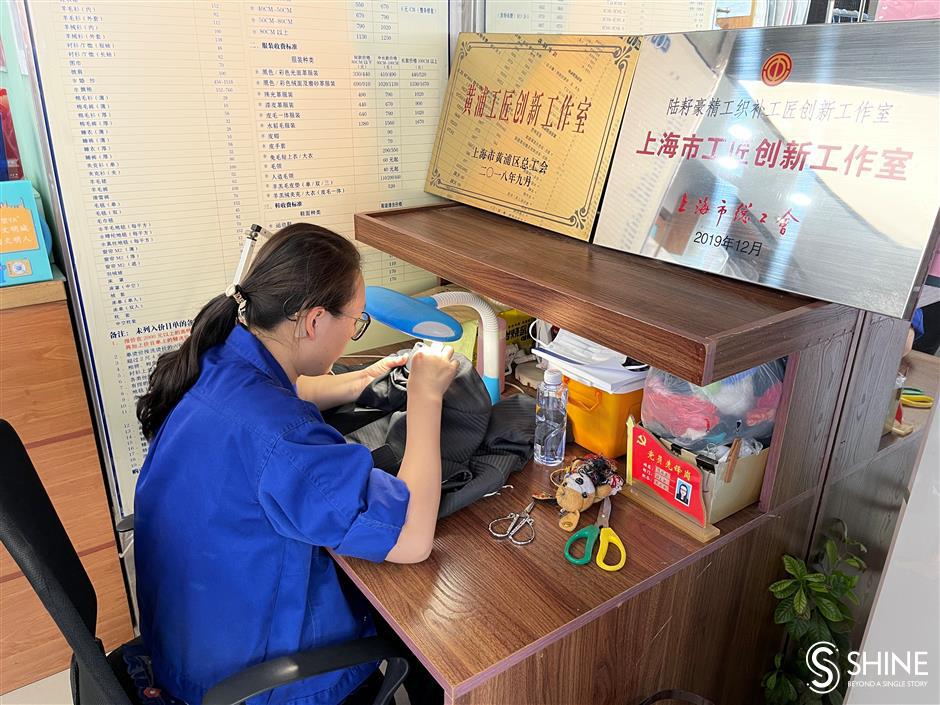 A colleague of Chen repairs a clothing item sent for laundering. 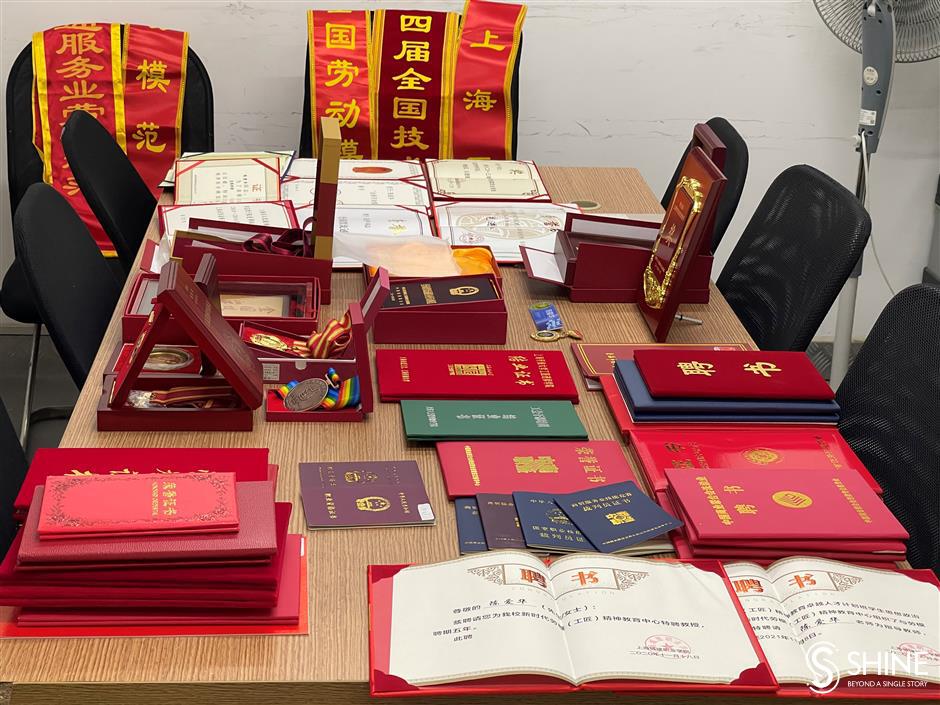 Awards and certificates honoring Chen Aihua are displayed in a room at her studio.