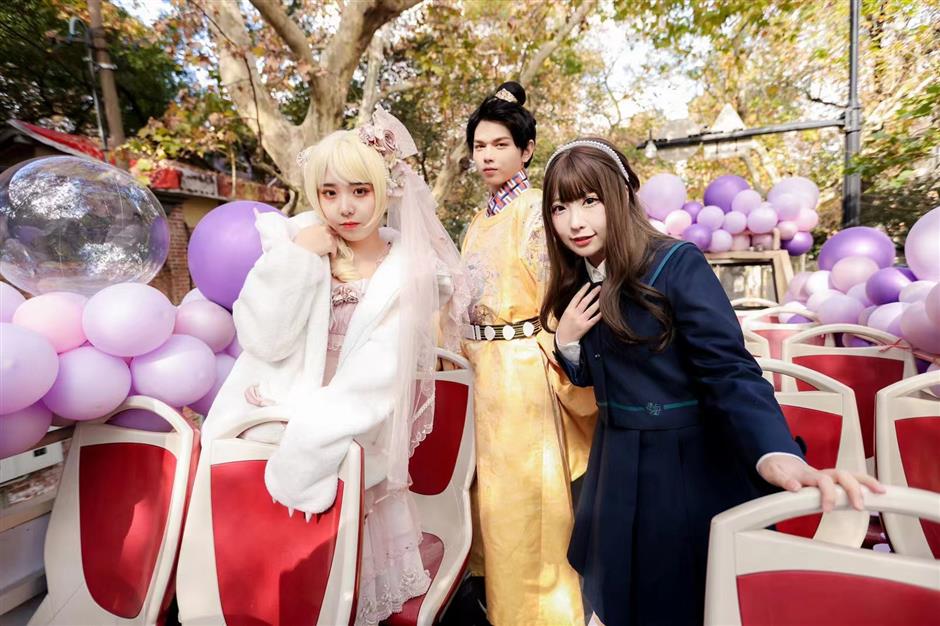 As a double-decker bus with people dressed like people from ancient times paraded around, it was just too striking to escape attention. "Interesting! Amazing!" passer-by Andres marveled in the crowd.

Wearing flowing robes with wide sleeves, exquisite headdresses and delicate makeup, the models on the upper sightseeing deck basked in the autumn golden hue. It looked like they had just emerged from a time machine as the bus passed by the Bund, People's Square and other bustling areas, creating a strange sympathy between old and new; the traditional and the modern.

"I've never seen it before," said the 27-year-old Spaniard. "I would like my girlfriend to have a try. Basically, these are beautiful clothes." 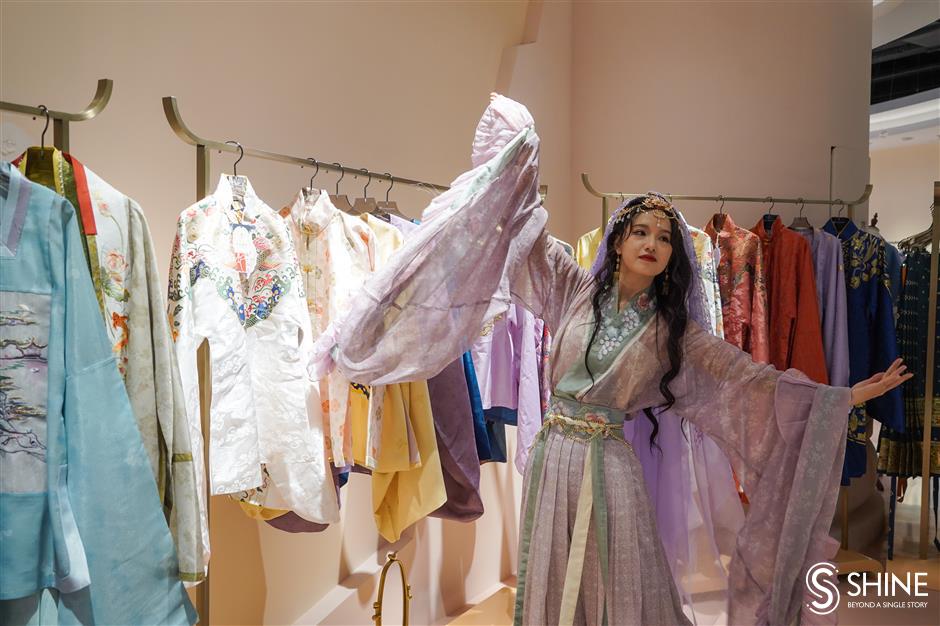 A woman dressed in hanfu dances in the newly-opened Poem & Mirror store.

The parade was held to celebrate the opening of Poem & Mirror, hailed as the country's first hanfu curated store, in late November.

The business was opened in the downtown Jing'an Temple area, a high-end commercial zone featuring fancy malls and luxury brands, rather than teenage hangouts, usually a safe choice for such stores. But CEO Sun Yaqiong is confident in the store's success, very certain of the resurgence of hanfu.

Traditional clothing makes cultural heritage trendy and approachable and allows Generation Z to express a sense of national identity. As the style reaches the mainstream, the store allows more people to see hanfu face to face.

What's more, hanfu culture is also gaining popularity abroad after the screening of China's costume dramas such as "The Legend of Zhen Huan" and "Nirvana in Fire." Consequently, Sun is considering branching out to the overseas market by selling hanfu on TikTok.

Andres, seemingly, would be a happy customer. 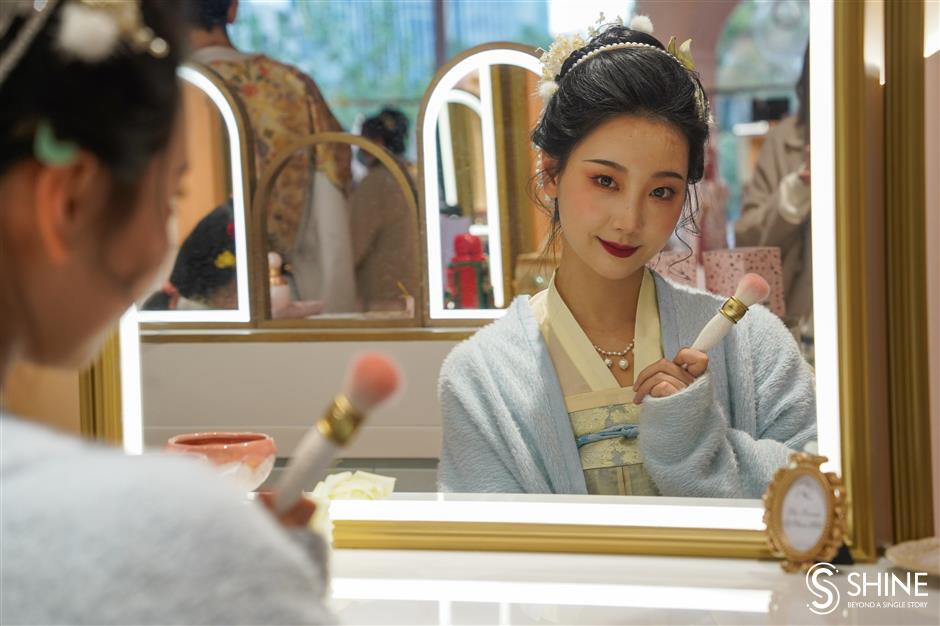 When it comes to traditional Chinese clothing, qipao may come to the minds of Westerners. But historically speaking, qipao is the traditional garment of Manchu women. It became synonymous with Chinese clothing only after it was modernized to body-hugging one-piece dresses in the early 1900s in Shanghai.

In fact, what really represents Chinese clothing is hanfu, the traditional costumes of the Han Chinese which make up more than 91 percent of the country's population. Over the past century, hanfu, however, faded. Maybe the design was too fussy or elaborate, or Western aesthetic taste came to the forefront.

When the new millennium arrived, a hanfu retro style emerged. Two decades on, it has grown from a small cultural movement to a trend amongst youth.

On her Weibo account, she encouraged Chinese families to wear hanfu in traditional festivals to "feel the charm of Chinese tradition," as well as to "better pass on our 5,000-year-old culture to the next generation."

Sports blogger Xiaomei hit the big time with a series of videos in which she dressed like a daxia, which means swordsman in Chinese, when sliding down a hill on a snowboard, which she called her sword. "As the Beijing 2022 Olympic Winter Games draws near, I hope foreigners can feel the charm of Olympics as well as hanfu," she said. 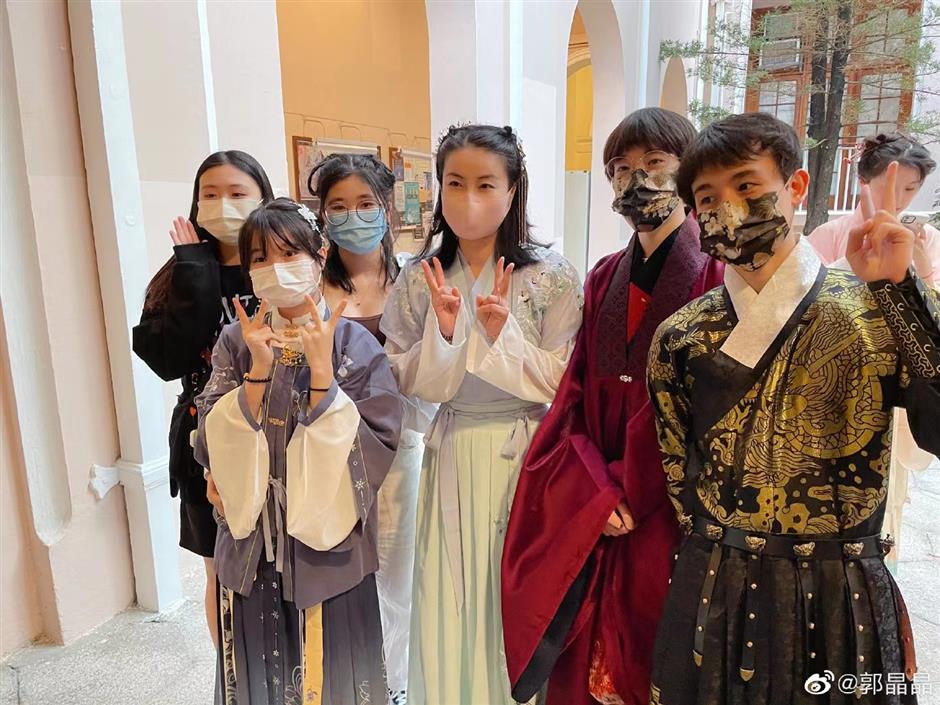 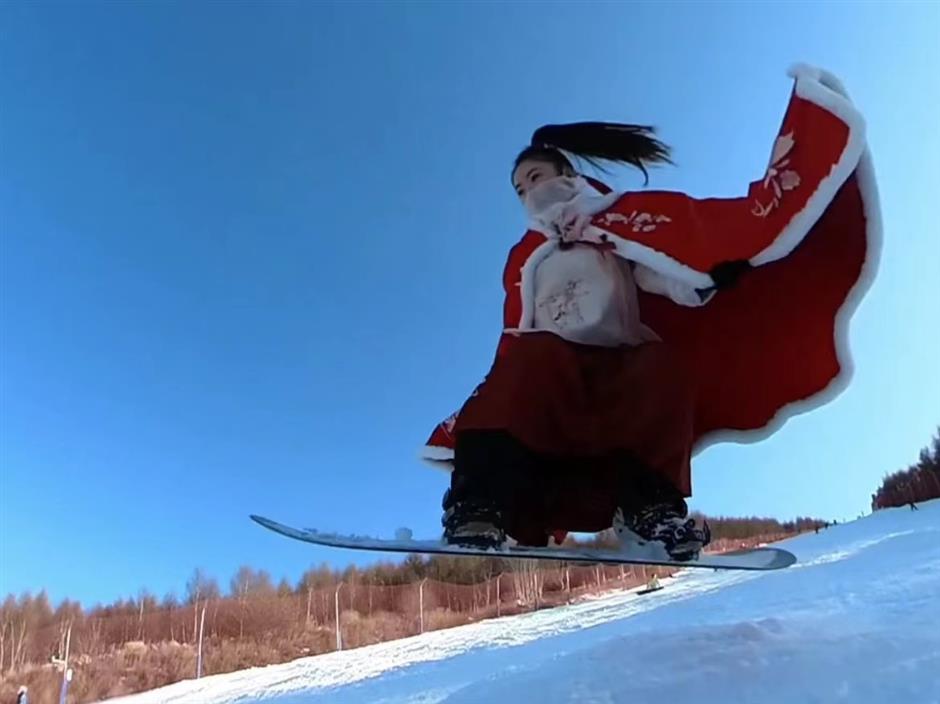 Sun believes what's behind the hanfu boom is a growing and more powerful China.

"China's Generation Z was born when the country was well on its way to growing stronger. Hence, naturally, they have strong cultural confidence, and they so keenly view guochao (trends steeped in Chinese tradition)," he told Shanghai Daily.

According to a survey by iiMedia Research, more than half of hanfu lovers in China are aged between 19 and 24, and the 16 to 18 age group accounted for nearly 23 percent, the second-highest proportion.

Sun coined the term "cultural customs" to describe where China is at in terms of cultural exports.

"French taste once prevailed in the fashion industry. Then, people went for street style with origins in the US. Actually, it took the US nearly 200 years to form its cultural customs. Later, Japan's ACGN (animation, comic, game and novel) subculture boomed," he said.

He added, "Now, China has had its own cultural customs. It's time for cultural exports. China's Generation Z is making their voices heard on the world stage hoping to strive for dominance in fashion and aesthetics." 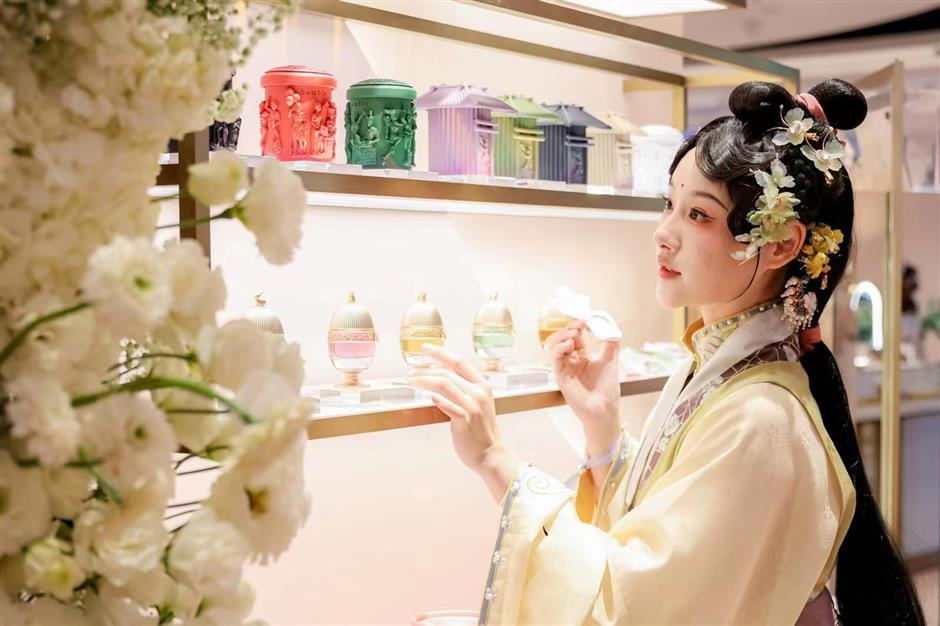 A woman dressed in hanfu in the Poem & Mirror 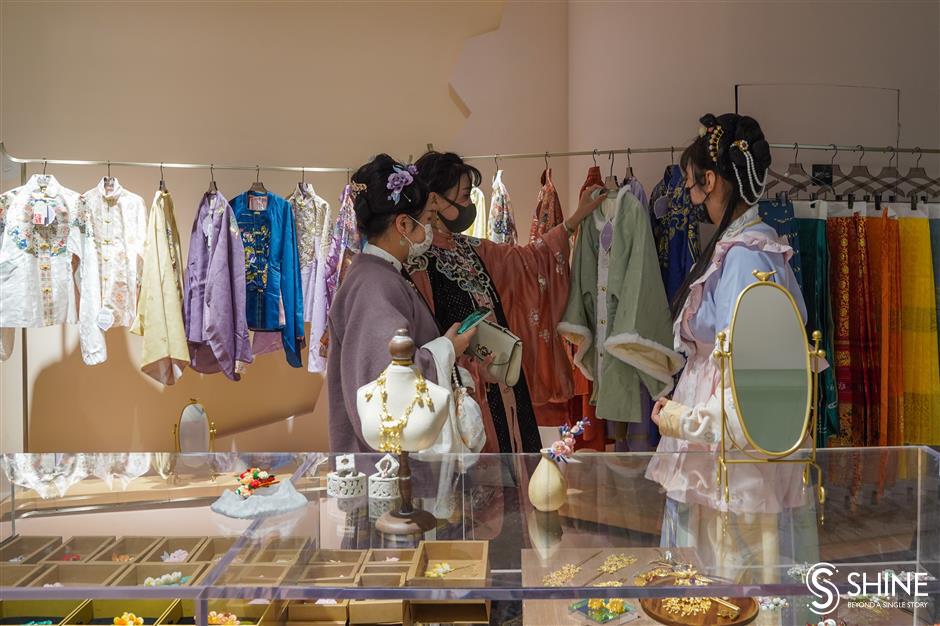 Customers pick up hanfu in the store.

According to iiMedia Research, the number of hanfu lovers could soar to nearly 6.9 million by the end of this year, with a consumer market of more than 10 billion yuan (US$1.57 billion).

Alibaba's Tmall marketplace revealed spending on hanfu in 2020 increased 500 percent of a year ago, and two of hanfu stores rang up more than 100 million yuan in yearly sales.

Always at the forefront of reform and revolution, Shanghai is the city with highest preference for hanfu, followed by Beijing, Chongqing, Chengdu and Hangzhou, as evaluated by consumption data.

Qingyin, a hanfu model with nearly 63,000 followers on Weibo, adopts hanfu as part of her everyday wardrobe.

She was invited to attend the opening ceremony of Poem & Mirror. As she walked by, she wore a well-blended combination of a Tang-style slip dress and a Song-style cardigan.

"I just mix up different styles today. I think it's perfect to wear for shopping. What I wear today is improved from original hanfu in design and textiles as to meet today's demands," she said. 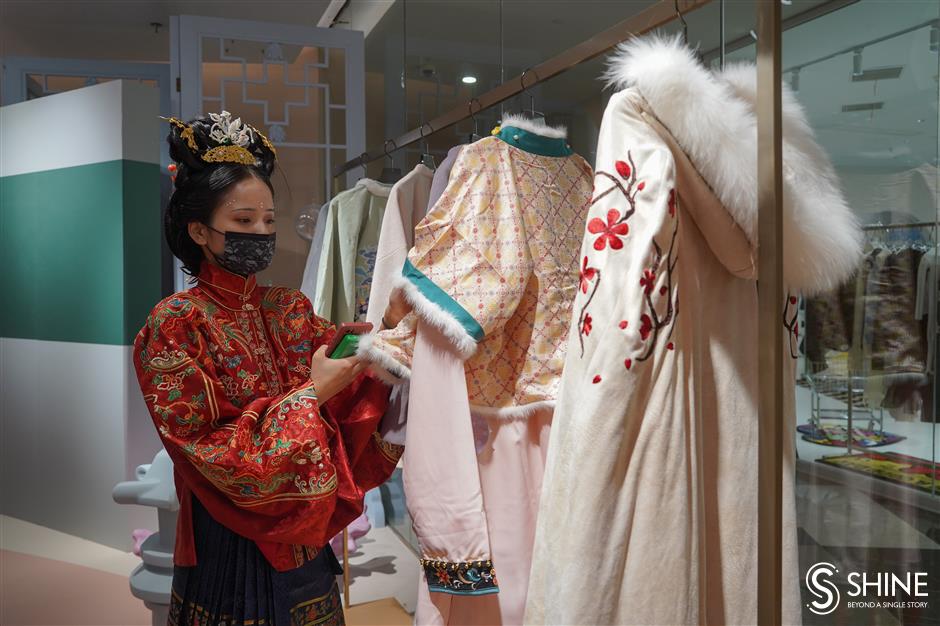 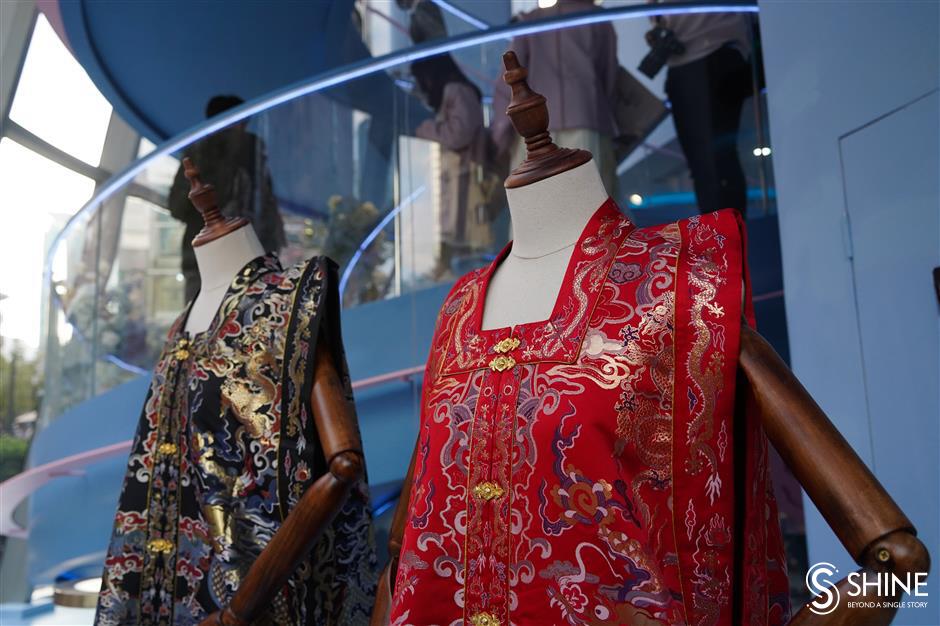 Yes, hanfu has made a comeback, and for many like Qingyin it has become a part of their daily life. Investors have sensed huge market potential.

The domestic tech portal 36Kr reported Poem & Mirror raised tens of millions of yuan in the Pre-A financing round, with plans to expand the supply chain and expand markets. In total, it has received nearly 100 million yuan within two months.

In an interview with Shanghai Daily, Sun said he plans to open 60 outlets within five years, with each becoming a local hanfu hotspot.

Xu Wei, a partner in ZWC Partners, is positive towards the industry, estimating the market size to reach 100 billion yuan in 2025. In the race to grab market share, Poem & Mirror is the first player to integrate resources.

According to Sun, the store will explore cooperating with museums to hold exhibitions and budding designers to interpret hanfu in modern contexts.

Additionally, policymakers have also noticed the prominence of hanfu culture.

She suggested designating the third day of the third lunar month as Hanfu Day because it is believed to mark the birthday of the Yellow Emperor, the legendary ancestor of the Chinese nation.

According to Cheng, the hanfu boom plays an important role to revive traditional Chinese culture, but there is a lack of official support to promote it. 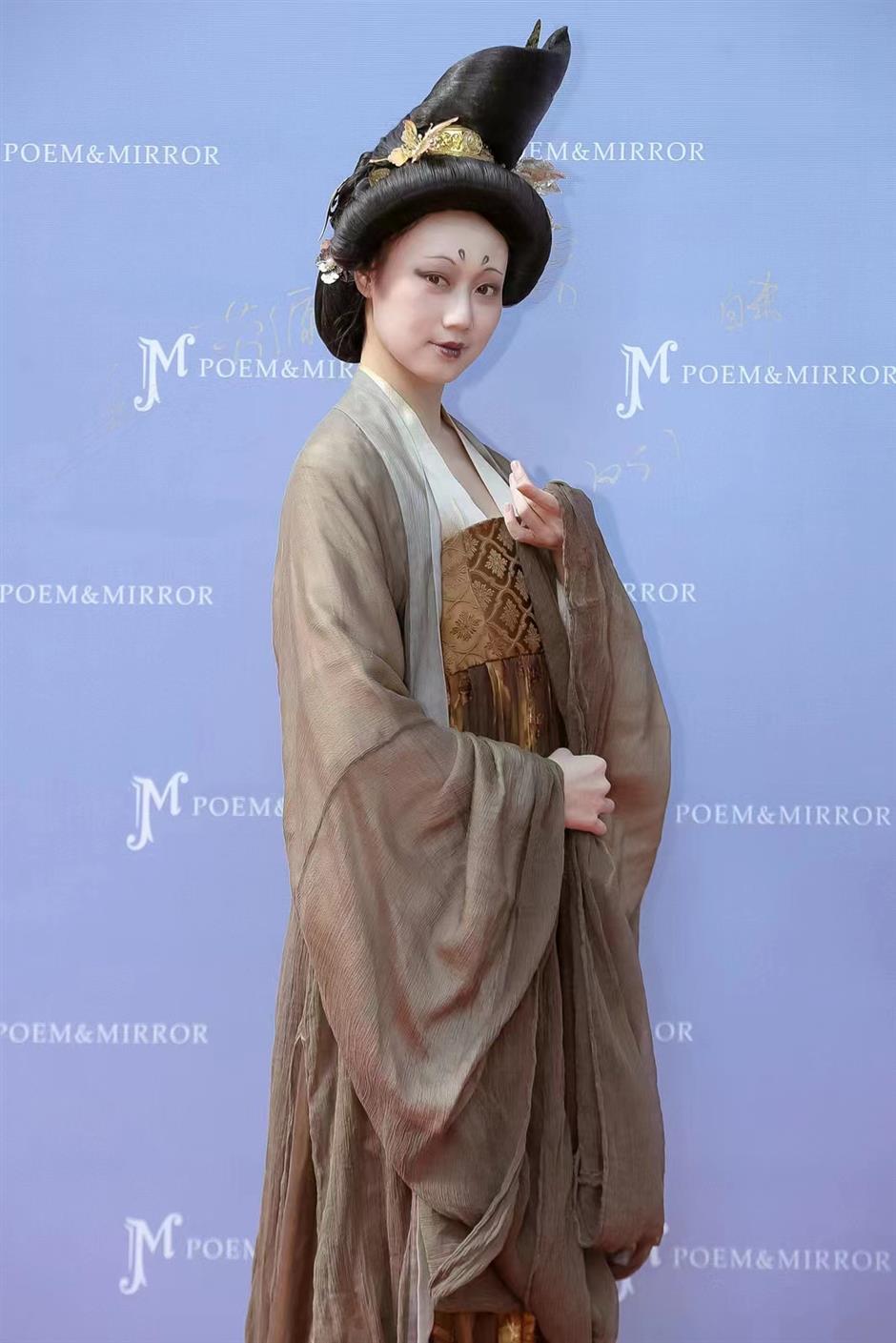 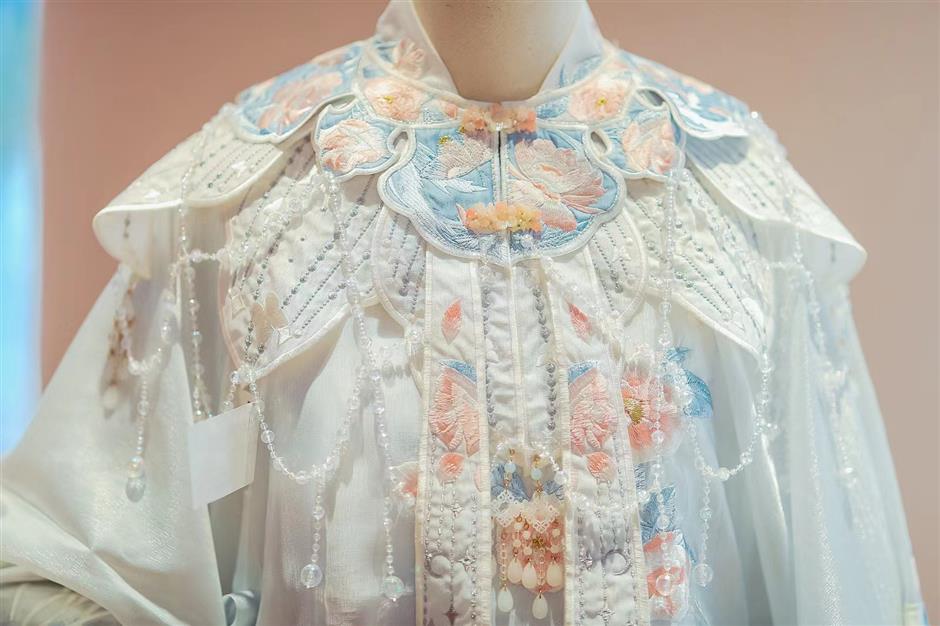