Turning a 'cool' material into an eco-friendly passion

Living in Shanghai with a bamboo bike, you can enjoy so much more than in a car – that's the lifestyle David Wang, 35, likes to share.

Designing, cutting, polishing and assembling, the American is devoted to making his eco-friendly bicycles.

The designs come from deep within his heart, with every component carefully chosen by him.

Bamboo is an eco-friendly material, and is especially meaningful in China where it has long been part of the traditional culture.

"There are thousands of types of bamboo in China," Wang said. "It grows very fast, and is a very good material for the frame. Its fiber can absorb all road buzz, and make the ride comfortable." 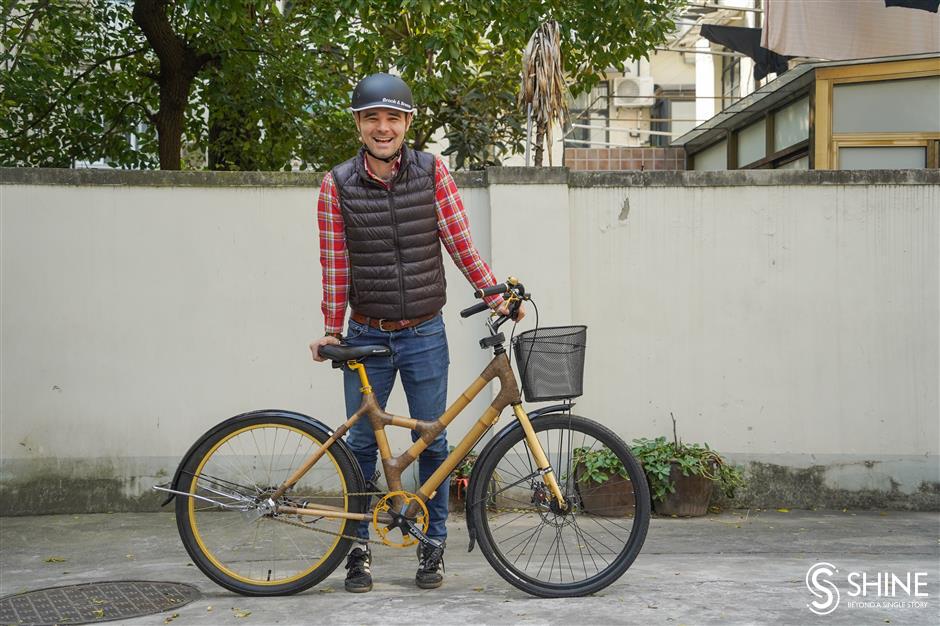 For Wang, the charm of China, especially Shanghai, lies in its inclusiveness.

"People here are always willing to accept new things, such as WeChat Pay and Alipay, so convenient, which is why the city is developing so fast," said Wang, who now runs a studio on downtown Yuyuan Road.

His idea for bamboo bikes started to take shape in Beijing.

Wang found that more and more people opt for driving cars, instead of riding bikes, even if they have one.

"I was thinking how we can make bikes fun and cool again, and using a sustainable material is one way," Wang said.

"The other way is teaching young people to make it themselves, because when you make something yourself, it feels quite different."

Wang created a bamboo bike club, named BBB (Bamboo Bicycle Beijing & Beyond) in Beijing and ran it for seven years. It appealed to people who would love to devote themselves to making their own bamboo bike and exploring the world on one they had made.

He and the BBB team taught people – youth, elderly, locals, foreigners, women and men – to build their own bamboo bikes from scratch.

"I wanted to create a community where people break the age barrier and communicate freely with each other." 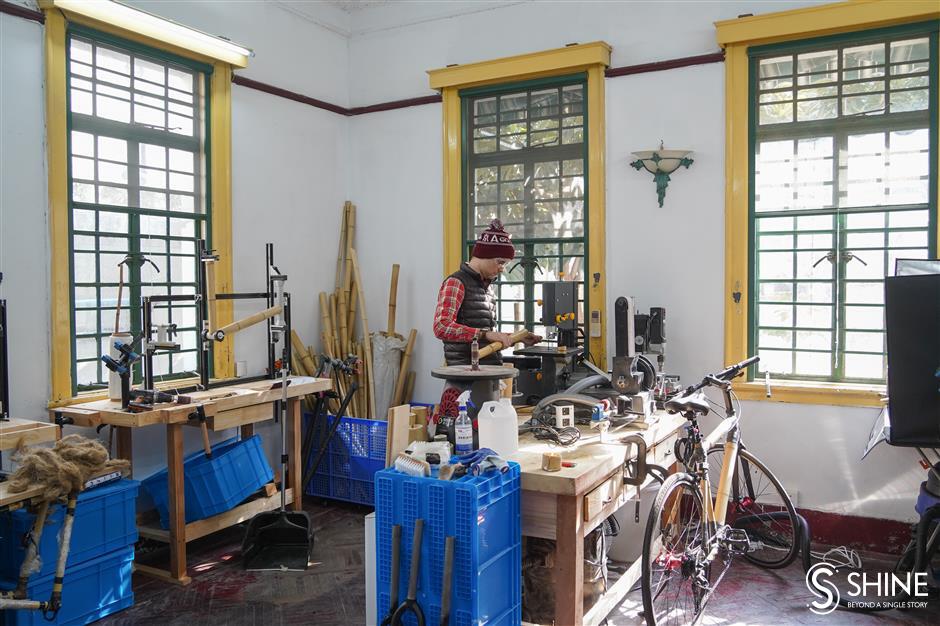 David Wang cuts bamboo for bike-making in his Shanghai studio. 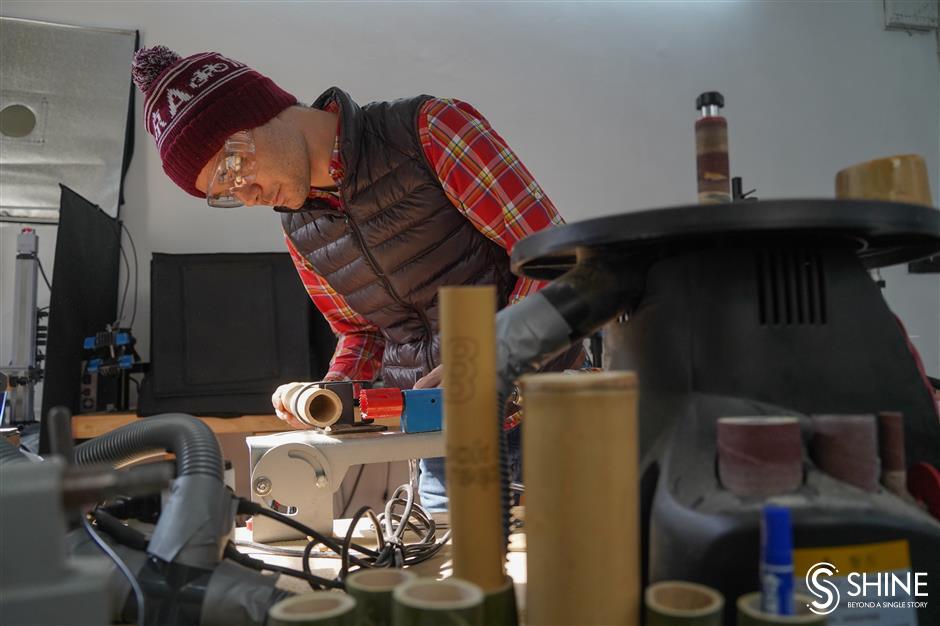 Wang uses a machine to turn a piece of bamboo into the right shape.

Things changed, however, when his second baby girl was born.

"I wanted to have a different and better environment for my daughters," he said. "Shanghai is a great city for families, especially for little kids.

"Shanghai is so international. Foreigners in Shanghai and their counterparts in Beijing are totally different." Wang said.

"Many foreigners told me that Shanghai is much more easier for them to settle down."

If Beijing is where he started the idea to make bamboo bikes, Shanghai is where the idea turned into a real business.

"I just got my business license," Wang said, "and I have found some factories in Anji to help me produce bikes in the future."

Anji,a county of Huzhou City in neighboring Zhejiang Province, is well known for its bamboo groves, and home to over 40 different types of bamboo.

For Wang, bamboo is not only a cool material, thanks to its firm and tenacious character, it is also full of Chinese elements.

"I am a mixed-blood person," said Wang, "my dad is from Hong Kong." 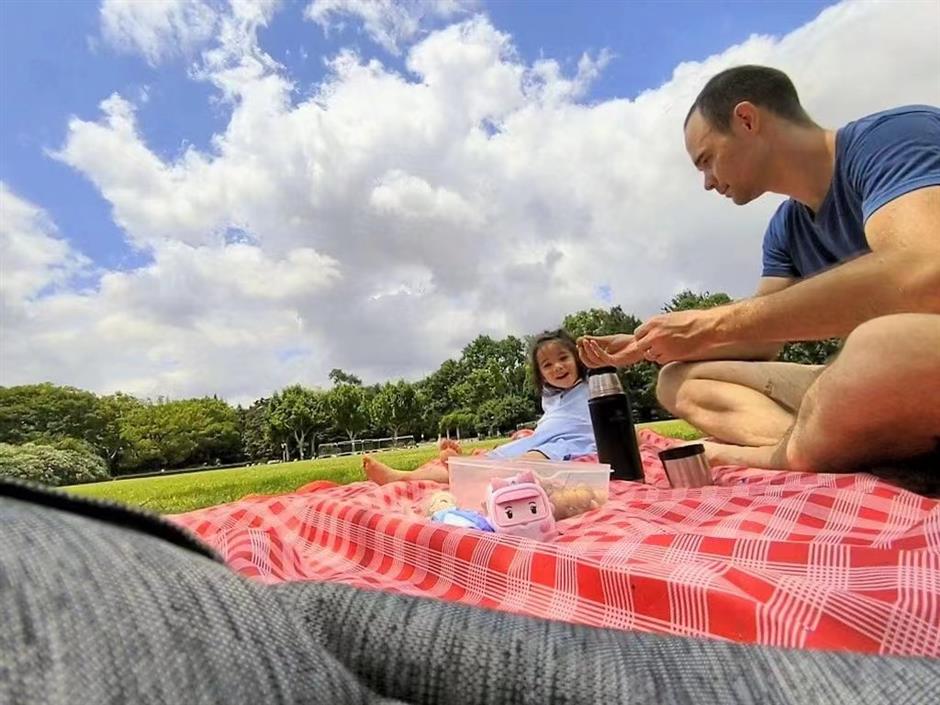 David Wang has a picnic with his little daughter.

Wang's interest in China started when he was very young.

"My dad is Cantonese and moved to the United States when he was 16," he said. "When I was in high school, I wanted to know more about my hometown, then I started taking a Chinese course at school."

He studied Mandarin but when he went home to say "你好吗" ("hello" in Chinese), his father said he could only speak Cantonese. After starting a life in China, Wang met a Chinese woman from Guangdong Province in south China and got married.

Wang has lived in China for over 10 years, initially spending two years in Xi'an, and seven in Beijing before settling down in Shanghai.

He has two daughters, Brook, 4, and Breeze, 1, and has named his studio "Brook & Breeze" after them.

"We gave them those names largely because we wanted them to be part of nature," he said.

"It also gives meaning to what I do, my career, to let people use a natural thing and explore nature." 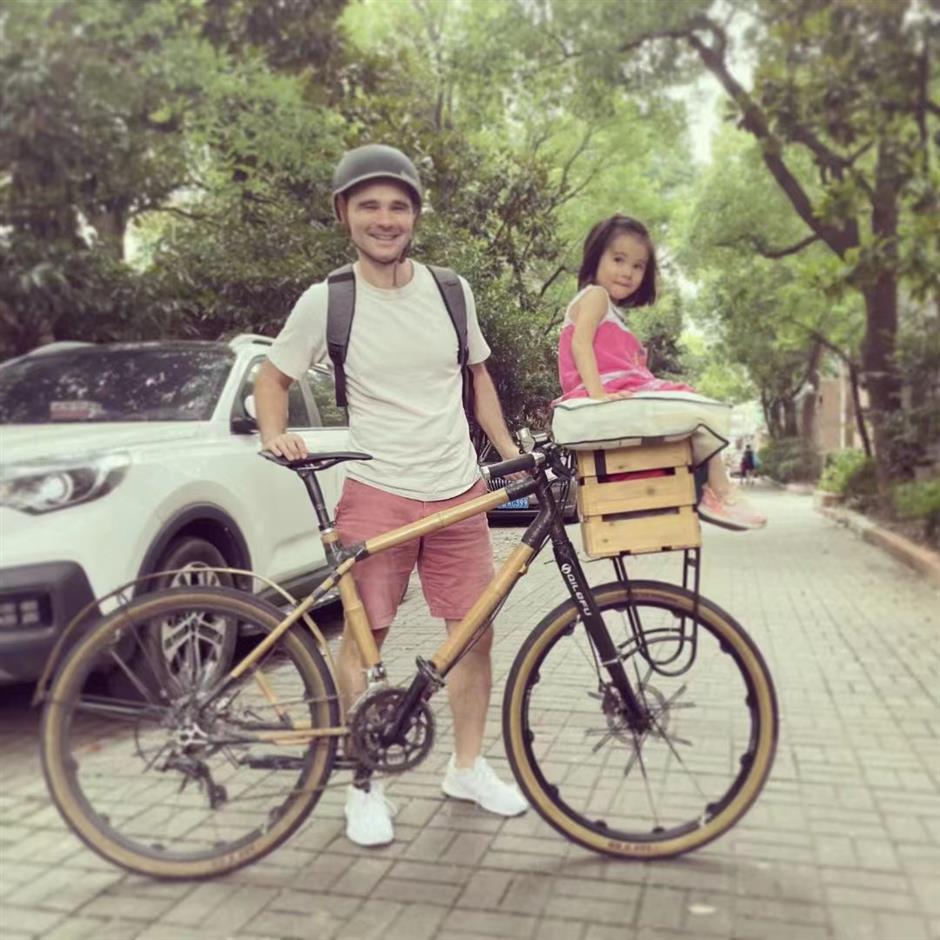 David Wang goes out cycling with his daughter on a bamboo bike. 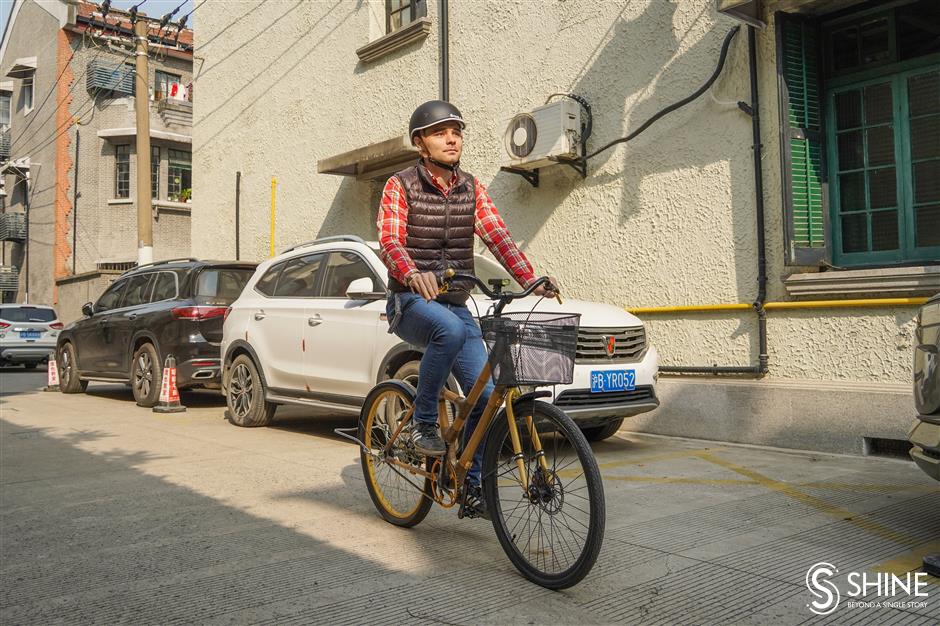 Wang rides his self-made bike near his home in downtown Shanghai.