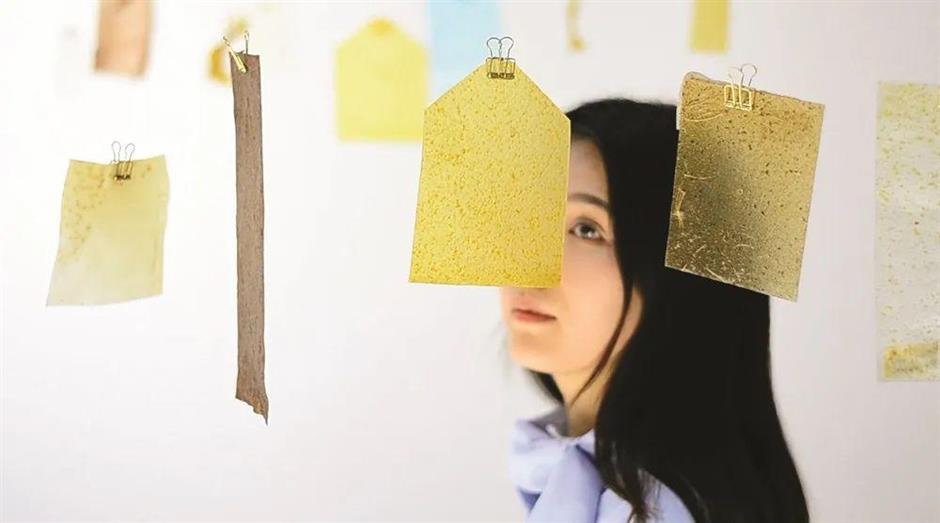 It might be difficult for people browsing around fashion stores to imagine that the displayed bags and clothes with pretty patterns that look like leather are made from the recycled fruit and food waste left on their tables or in the trash.

But it's nearly a dream come true, thanks to innovative designers like Song Youyang, 30, whose fully biodegradable fabric Peelsphere won first prize for green innovation from fashion giant Kering earlier this month.

A 100,000-euro (US$113,270) purse that went to Song and her startup company Peelsphere will be used to improve her current fabrics, develop new material, expand the team and design more new products, she told Shanghai Daily. 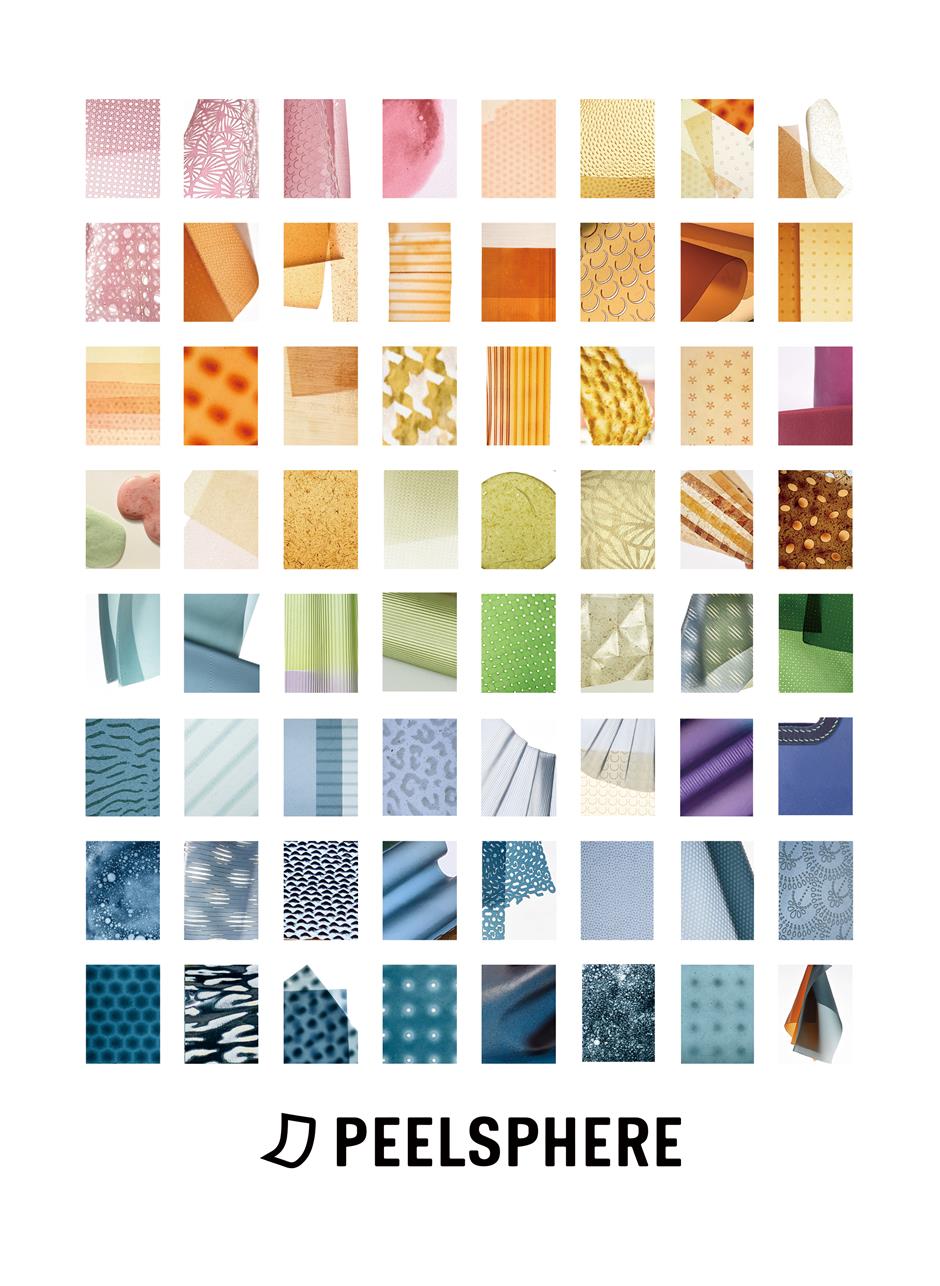 Peelsphere materials that look like leather all come from fruit and food waste left on the table or in the trash bin.

Song, a textile designer, used to live in Germany. In Berlin, nearly 60,000 to 70,000 tons of biological waste are produced every year and some 17 percent of it is fruit waste.

Data from Shanghai's greenery and sanitation authority show that in the first half of this year, the daily amount of wet waste being sorted amounted to more than 10,000 tons, an increase of nearly 90 percent from two years ago. 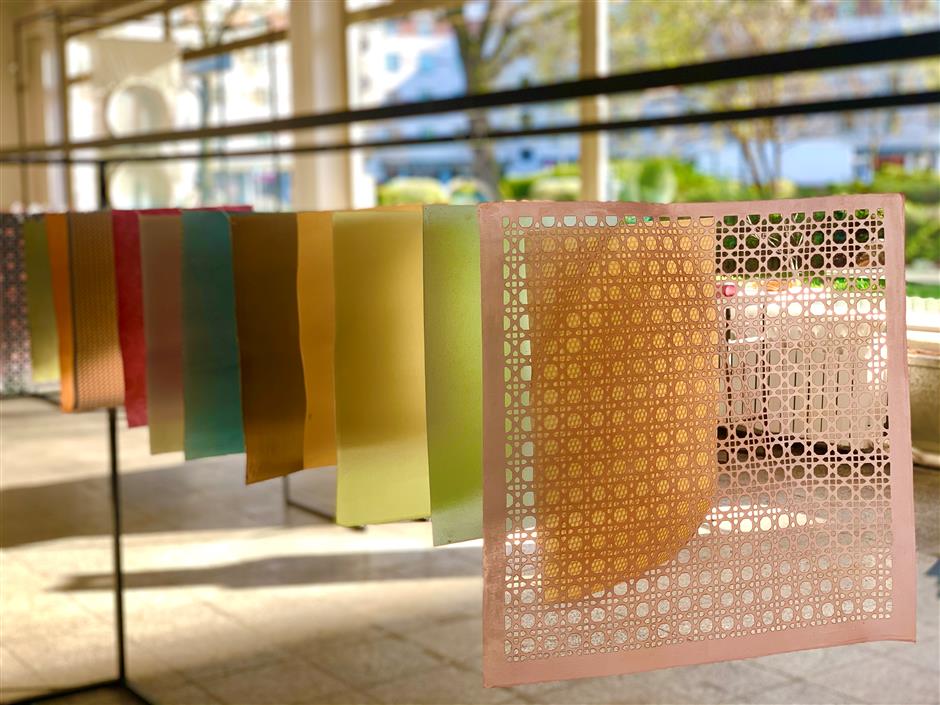 The partly transparent Peelsphere material, which is robust, flexible and smooth as leather, has fibers inside and the nice flavors of fruit.

Compared with other kinds of waste, biological waste causes less pollution. But now it's mainly used to produce fertilizers and natural gas, which will consume a lot of energy. So if biological waste can be transformed into new materials, part of this problem can be solved.

Song's partly transparent Peelsphere material, which is robust, flexible and smooth as leather, includes fibers and has the nice flavors of fruit.

"The flavors can last for two to three months and then weaken," she said.

Song, who is staying in Shanghai, studied material design when she was in graduate school. "My focus is the design of environmentally friendly and biodegradable new materials and bionics. So I started to research innovative materials," she said. 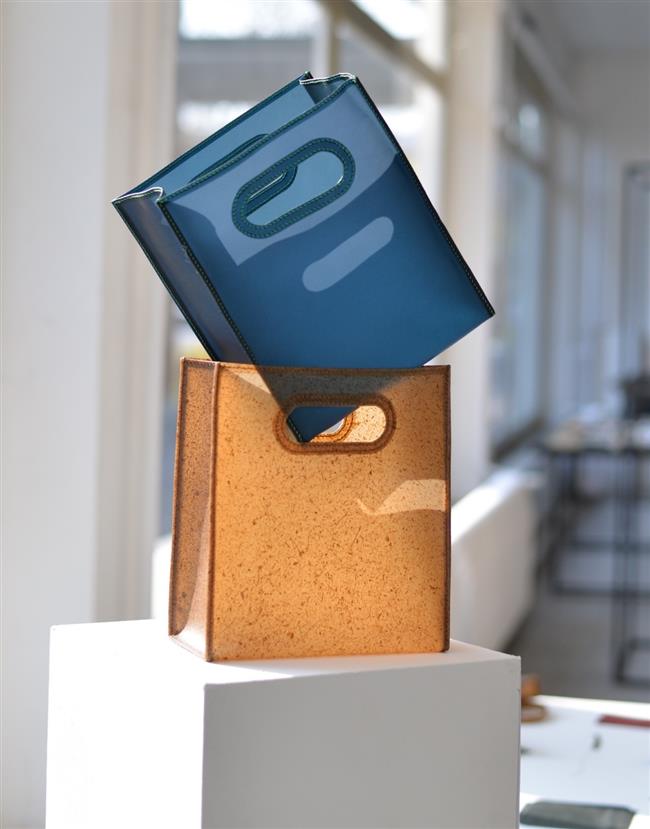 Peelsphere materials used as a leather substitute for fashion products like bags.

However, when she was designing, she couldn't find any fully biodegradable material to use. So she decided to develop her own. "I like observing things in daily life and I once found that fruit peel had a pretty texture, good sense of touch and nice flavors."

Song then explored the possibilities of fruit waste to see if there was a way to develop a new material based on it. The resulting products she developed retained the fruits' flavors, textures and sense of touch.

Song is concerned about the damage to the environment caused by the traditional material industry.

"In daily life, biological waste is always easily discarded by people and its great potential for reuse has not yet been fully developed. So I started to explore the process of turning waste into treasure," she said. 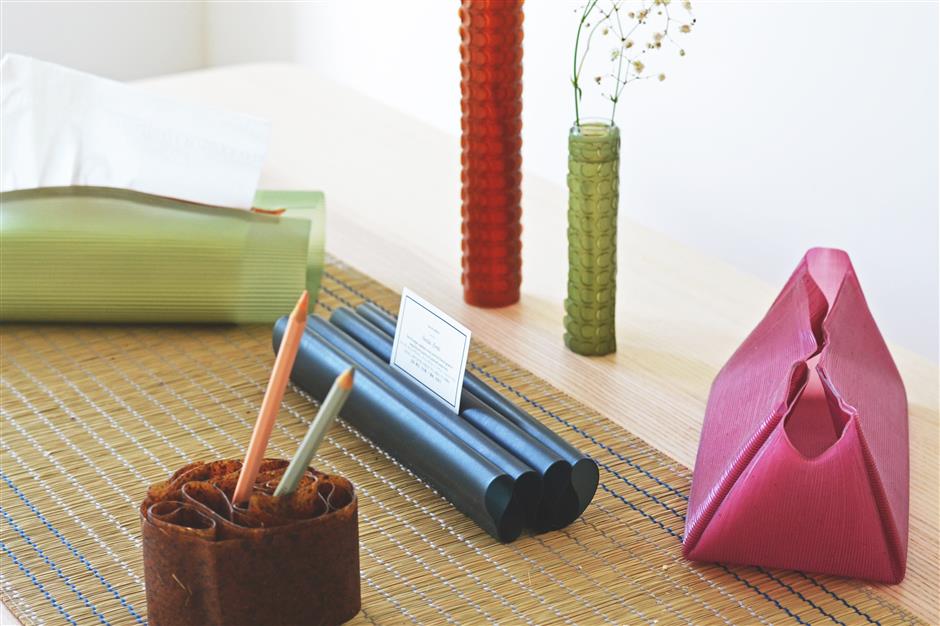 Interior design items made of Peelsphere, such as lamps, desktop storage items and stationery.

Using the new material, Song and her team will work hard to make sure either fast fashion or slow fashion is truly sustainable, with recycling, redesign and reuse.

So far her company has developed four different types of new material. The first is made of banana peel, the second is a series of natural dyeing materials, and the third is hard materials used for making products like buttons. And now it is developing a completely leather-like material.

The materials are mainly used as substitutes for leather in fashion products like bags. In addition, they also go into products for interior design, such as lamps, desktop items and stationery.

"We never use harmful chemicals in processing our materials and we do not emit toxic or harmful substances during production," she told Shanghai Daily. 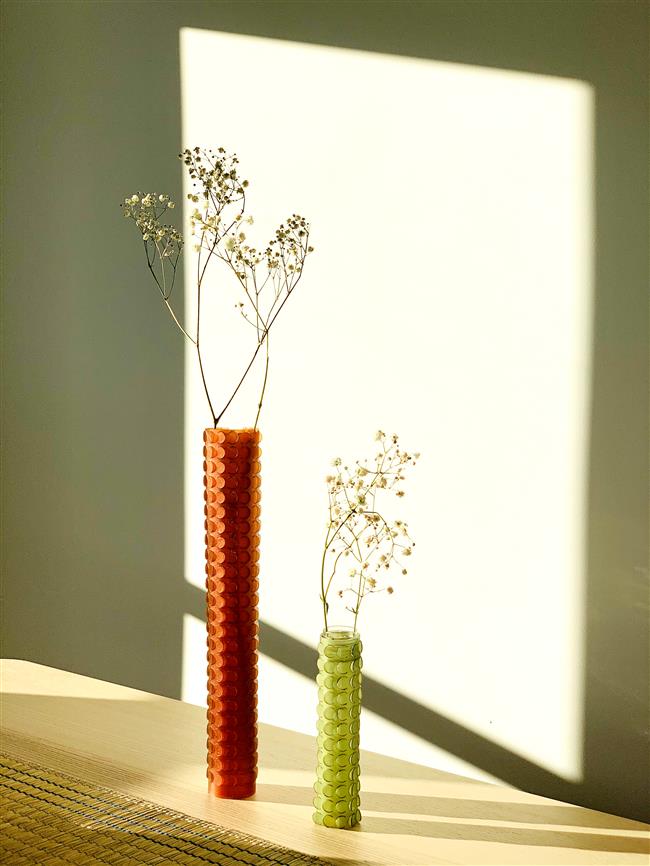 Peelsphere material can also be made into items like vases.

However, people still have their own stereotypes of environmentally friendly materials, she said. They imagine that the prices are often high due to "a stupid tax or gimmick" or have poor quality, making it difficult for such materials to enter the market.

But Song thinks biomaterials and sustainable materials represent the future.

"With the participation of more scientific research institutions, brands and designers, I believe biomaterials and sustainable materials will become mainstream. When they gradually replace leather and plastics, the fashion industry and its relevant industries will be closer to the green economy."

An increasing number of companies in the fashion field are contributing to sustainable development and biodiversity.

Otex, the second-placed Kering award startup, well-known for its biological and natural mulberry silk textiles, was recognized for its work in soil health. Zeno Technology was ranked third for applying microbial technology to dye production and fabric printing.

Zhu Tianze, 31, chief executive officer of Zeno, told Shanghai Daily that according to its investigation, the traditional printing and dyeing industry sometimes can be harmful to the environment. "Some firms 'dyed' the water system and the land in different colors," he said. 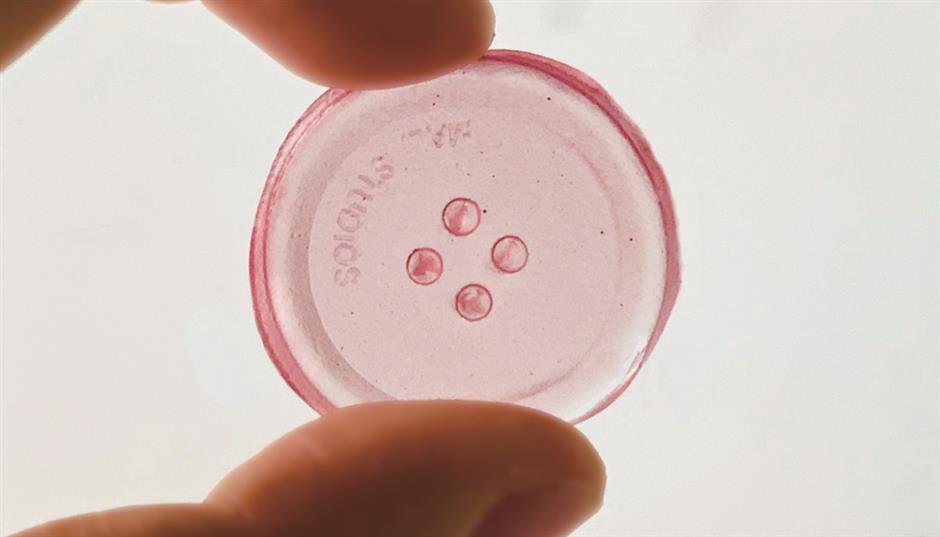 The company is now mainly using microbial fermentation to produce dyes. "The emission of carbon, waste water, waste gas and residues during the production of microbial dyes are lower than traditional processes. And such dyes are more natural and safer."

Zeno estimates its new process can help cut 40 percent of carbon emissions and 30 percent of water consumption. As microbial fermentation dyeing is completed at the same time, costs can be saved with higher color fastness.

At the fourth China International Import Expo last month, LVMH, Richemont and Kering, the biggest three fashion conglomerates, all focused on the ideas of sustainability, low carbon and environmental protection.

They demonstrated that fashion should not equate to just extravagance and waste but could also be eco-friendly. 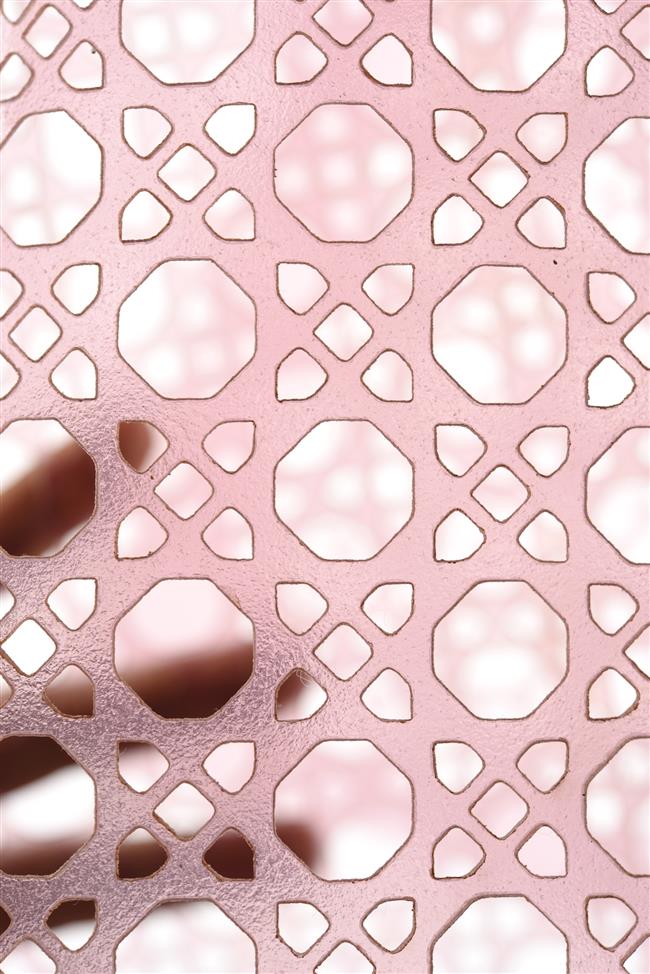 Fibers can be seen inside the Peelsphere material.