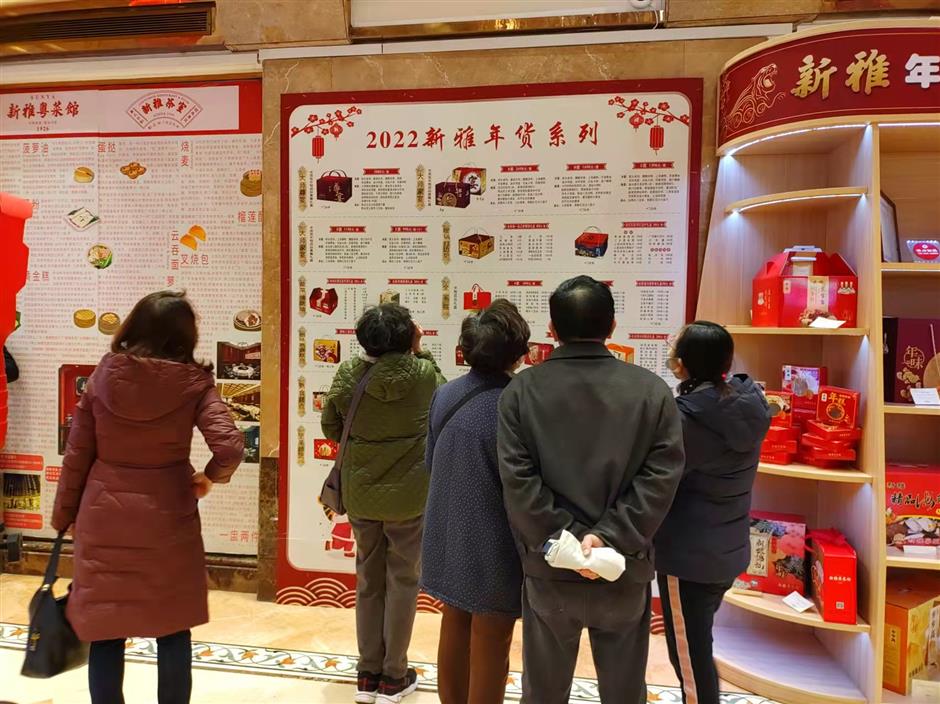 People check the menus of pre-cooked nianyefan meals on offer at Sunya Cantonese Restaurant on Nanjing Road E. in Shanghai. 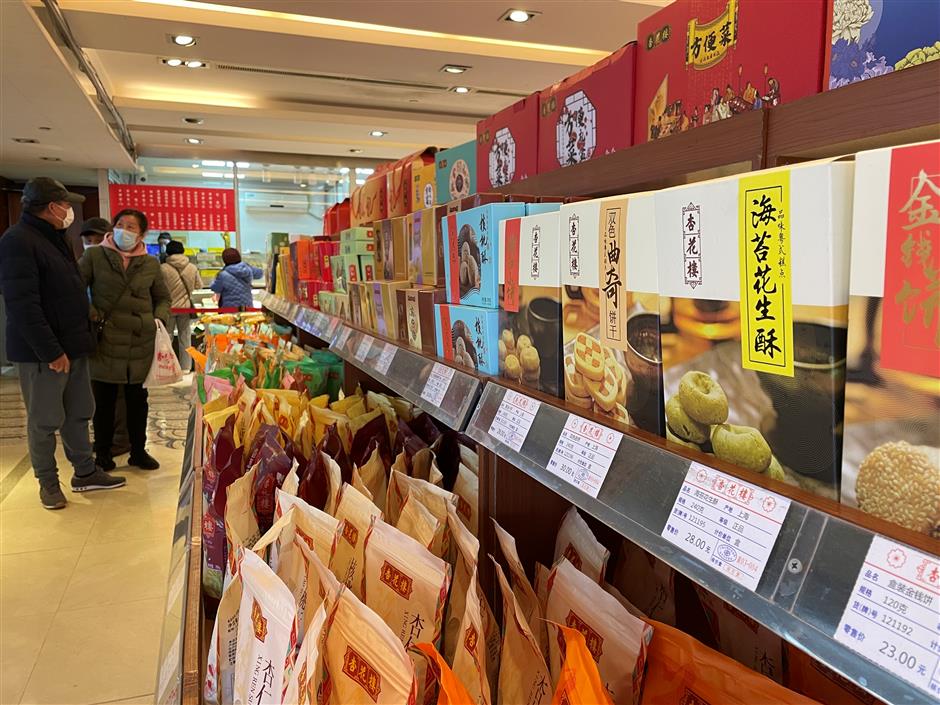 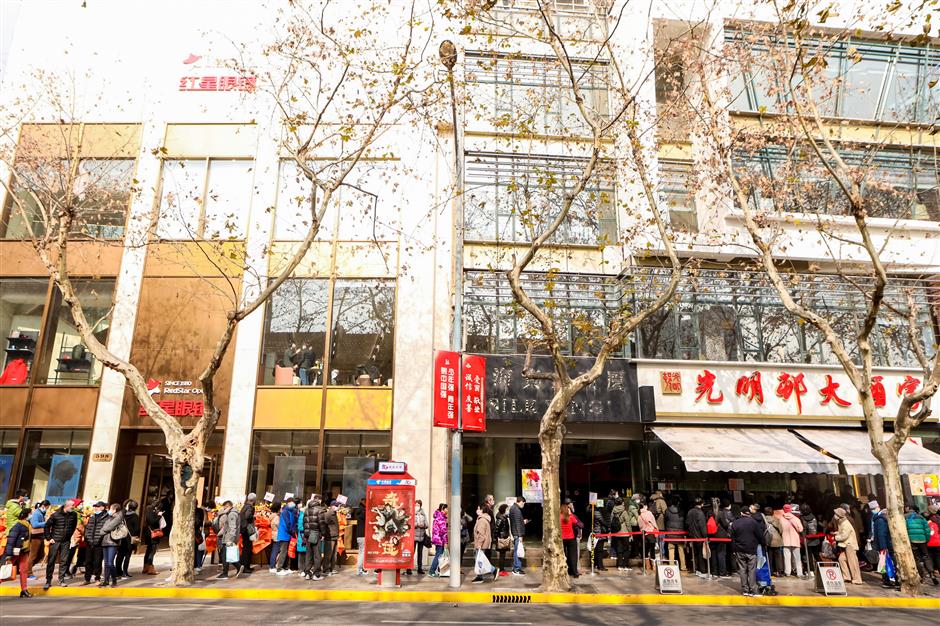 People line up to buy food of a restaurant on Huaihai Road in preparation for the Spring Festival.

Ye Jiajia, 35, a Shanghai resident of Yangpu District, has made a tough decision to cancel her family's reservation for a traditional nianyefan, or Chinese New Year's Eve dinner, at a restaurant.

Many restaurants usually get booked out as the traditional festival approaches. Chinese New Year's Eve falls on January 31 this year.

Her family of 12 has stuck to the tradition of dining out for nianyefan for the past six years, and this year's reservation was made quite early – last October.

"Dining out is a convenient option because it takes quite long time to prepare a banquet at home for a family reunion," she said.

"My grandparents are in their 80s, so in response to the government call to avoid gatherings and also giving consideration to their health we made this hard decision," Ye said.

"I asked for other opinions in our family WeChat group, and they all agreed even though there was an argument at the beginning," said Ye.

The other side of the coin is that pre-cooked dishes, which are easy to cook and pleasing to the eye, are becoming more popular, particularly among young people.

Ye said she purchased a pre-cooked meal at time-honored Sunya Cantonese Restaurant, which comprises a variety of food from cold dishes to dim sum.

Dating back almost a century, Sunya Cantonese on Nanjing Road E. features 24 types of pre-cooked meal packages with prices ranging between 178 yuan (US$28) and 3,888 yuan. 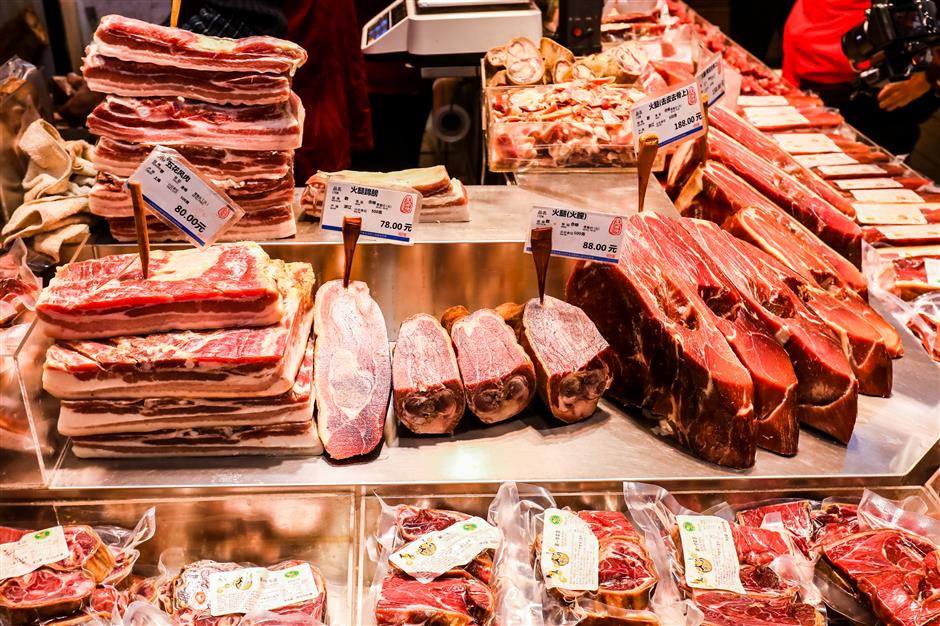 Hams are on offer at a time-honored food store on Huaihai Road. 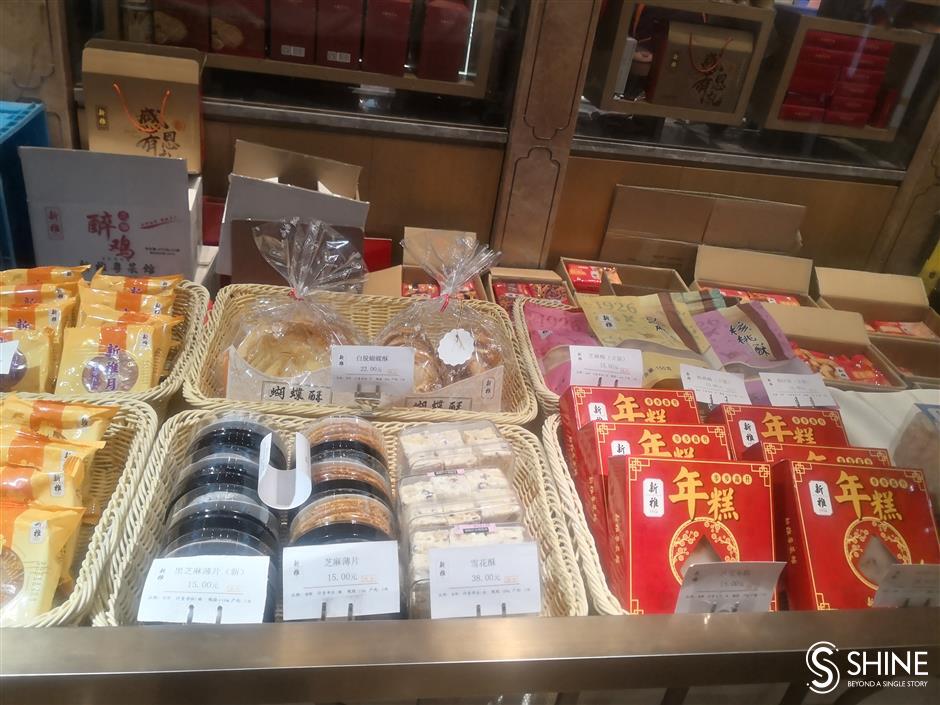 "Each package has a QR code attached, and people can watch cooking videos by scanning the code to make the cooking process easier," Zhu said. "The entire cooking procedure – cold dishes, hot cuisine, soup and dim sum – is covered."

The videos were made by senior chefs.

"Even if you are a cooking rookie, the flavor is the same as the chefs make if you follow the procedures in the videos," said Zhu.

The packages can be purchased at nearly Sunya's 40 outlets across the city, but reservations are required to prevent gatherings and reduce waiting time.

The crown jewel of Fujian cuisine, fotiaoqiang ("Buddha jumps over the wall" or "Buddha's temptation"), is a sumptuous and extravagant soup often served as a main course at Chinese banquets. Packages of fotiaoqiang are already sold out, according to Zhu.

Ding Xiao, a Shanghai resident, carefully checked what was available on a display board at Sunya, which lists all pre-cooked meal options.

"Convenience is the priority because I only need to make simple food, which saves a lot of time," said Ding. "I prefer time-honored brands as they represent childhood memories." 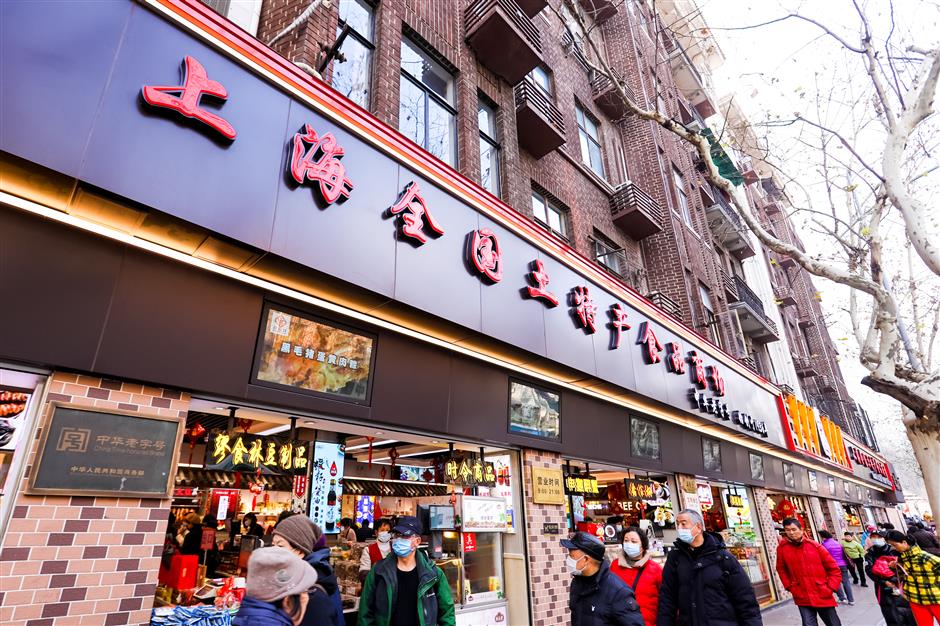 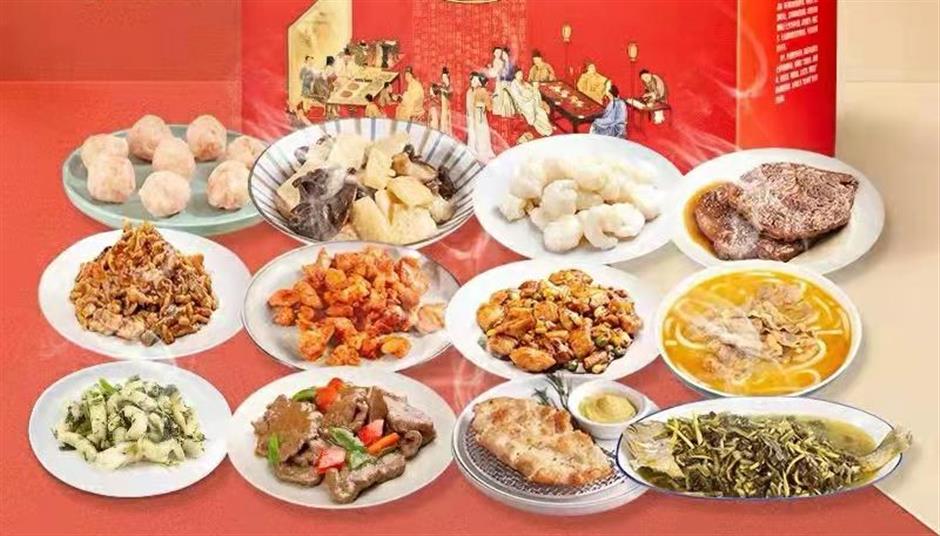 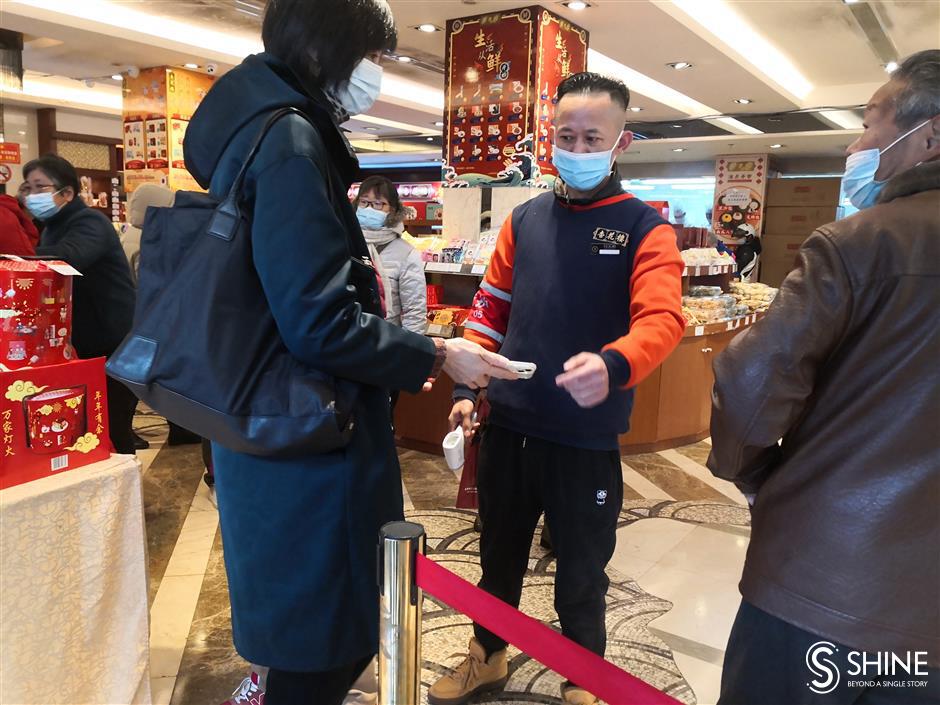 Everyone must show their health QR code to enter Xing Hua Lou.

More than 70 percent of people will have nianyefan at home this year, and over 50 percent of those plan to purchase nianyefan packages, a recent survey revealed.

For the most important meal of the year, 45.3 percent of respondents said they're willing to spend between 800 yuan and 1,200 yuan on the package, while more than 28 percent said they will spend over 1,200 yuan.

"My husband and I have invited our parents to our home on Chinese New Year's Eve to try our cooking," said a Shanghai resident surnamed Han who is in her 30s. "We want to let our parents have a rest, as they always cook for us and my husband and I will do the cooking together."

Pre-cooked meals also endow a sense of ritual for the family reunion dinner.

As many people will stay put during the holiday due to COVID-19, the flavor options for pre-cooked meals are diversifying – including cuisine from places such as northwest – to please the taste buds of those who can't return to their hometowns for the traditional holiday. 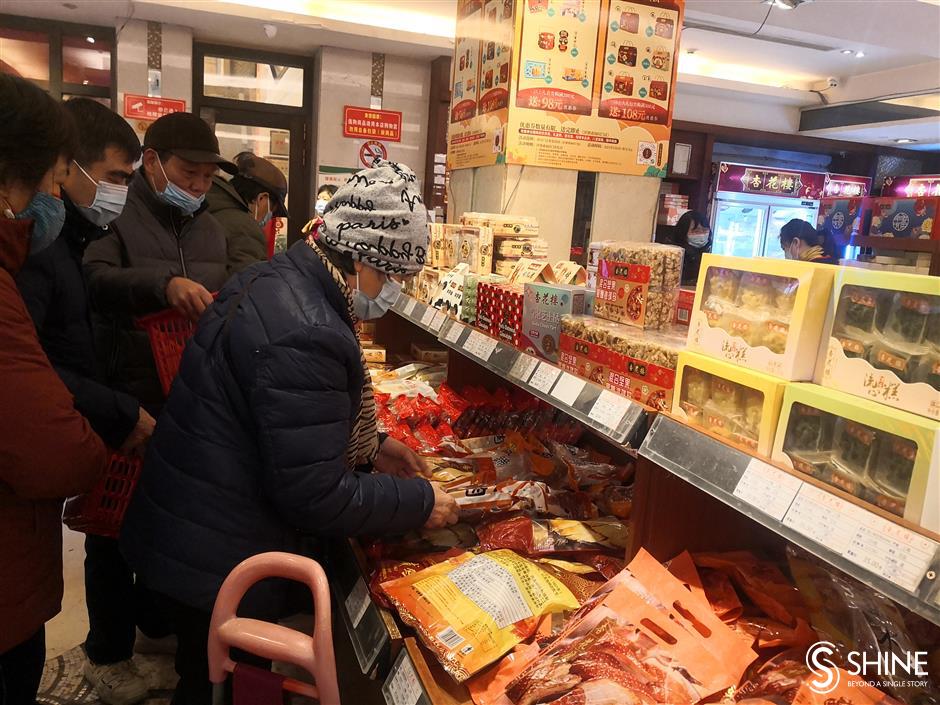 Pencai, an assorted stew of upscale delicacies – including abalone, sea cucumbers and fish maw – mostly seen on dining tables in Guangdong and Hong Kong, has become popular in Shanghai in recent years.

Quanjiafu (hodgepodge) is a famous New Year's dish in Shanghai.

"Although it's a popular choice among old Shanghainese, many consumers are looking for something new," Zhi said. "A more sumptuous banquet than usual is the basic nianyefan requirement for people, and the classic fotiaoqiang with high-end food ingredients has been wanghong (online celebrity) cuisine on nianyefan tables of Shanghai residents in recent years." 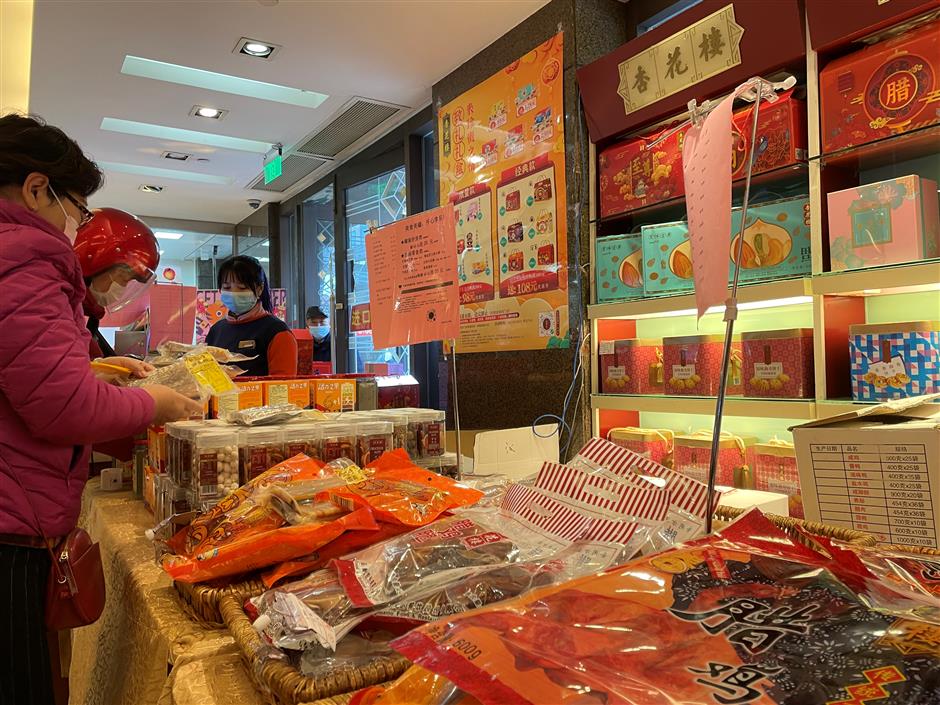 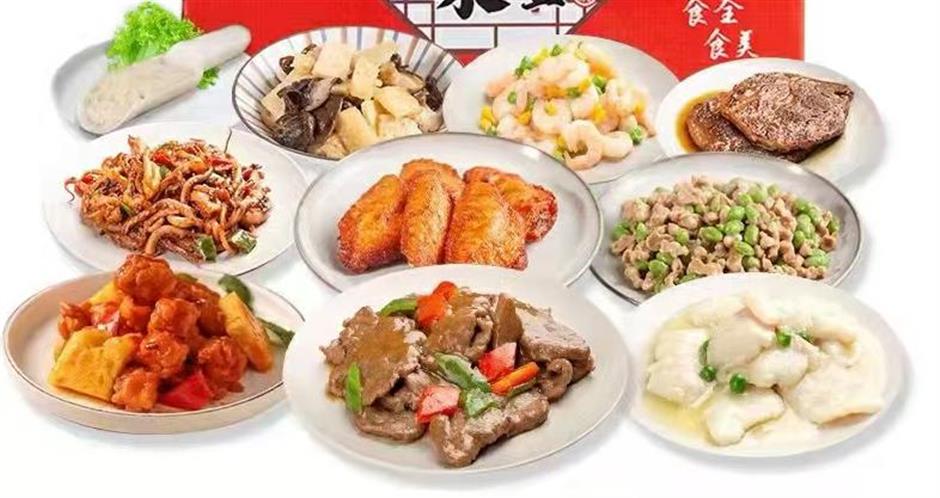 A nianyefan banquet in a pre-cooked package

Shanghai retiree Li Bin brought a trolley case to Xing Hua Lou. She lives in Hongkou District and takes the Metro to the restaurant.

"I bought babaofan (steamed sweetened glutinous rice with eight different ingredients), niangao (glutinous rice cake), songgao (soft and fluffy rice cakes filled with red bean paste), as well as nuts and salted duck and some pre-cooked dishes," said Li. "These are some must-eat food for Spring Festival, and it is a family tradition to purchase New Year's goods at the restaurant. My mother used to do so, but she is too old to come now."

"A Hong Kong-style pencai package has been popular among Shanghai residents since its launch," said Ou Houxi of Shanghai-headquartered online grocer Dingdong Maicai. "Several thousand were sold daily. Shanghai residents' dining tables reflect the trend of merging varied flavors from across the country."

Some e-commerce platforms even offered king crabs from Russia and caviar and shrimps from India to bring an exotic flavor to Shanghai residents' nianyefan tables at a recent online nianhuo (New Year's goods) shopping festival.

Some restaurants are offering delivery services for cooked nianyefan banquets.

A few consumers of pre-cooked meals who are picky about flavors said there is still a gap in dishes, restaurant chain Heji Xiaocai said.

This year, Heji Xiaocai will deliver cooked nianyefan to people's homes near its outlets, which will be hot when they arrive. 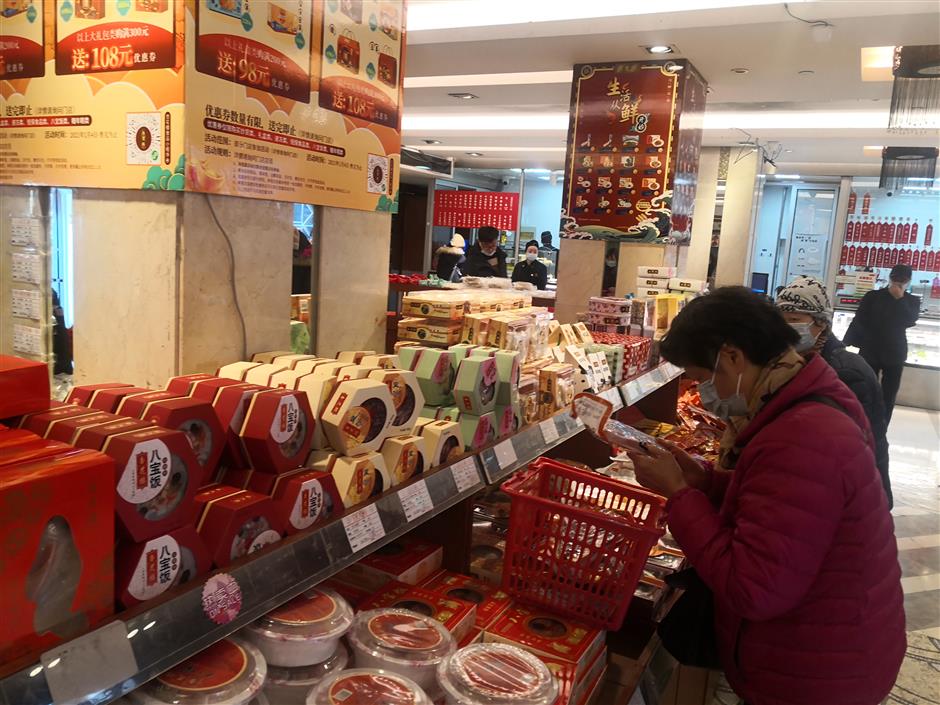 Time-honored brands said their nianyefan tables have been fully reserved and strict COVID-19 prevention measures will be implemented.

"All tables for nianyefan were reserved as early as the first half of last year," said Wang Xiaping, manager of catering at Xing Hua Lou.

Xing Hua Lou has recently been renovated and its old menu has been transformed after nearly six months' development by Shanghai and Hong Kong chefs. The new dishes represent the essence of Cantonese flavors but embody an innovative approach.

Its nianyefan menu is brand-new as well.

A stewed chicken is stuffed with seafood such as abalone, fish maw and sea cucumber, and the bone is removed in advance and stewed in abalone sauce for more than an hour.

Changfen (rice rolls), a Cantonese-style classic snack, is mixed with beetroot, spinach and pumpkin juices while barbecued pork is sprinkled with rose wine. 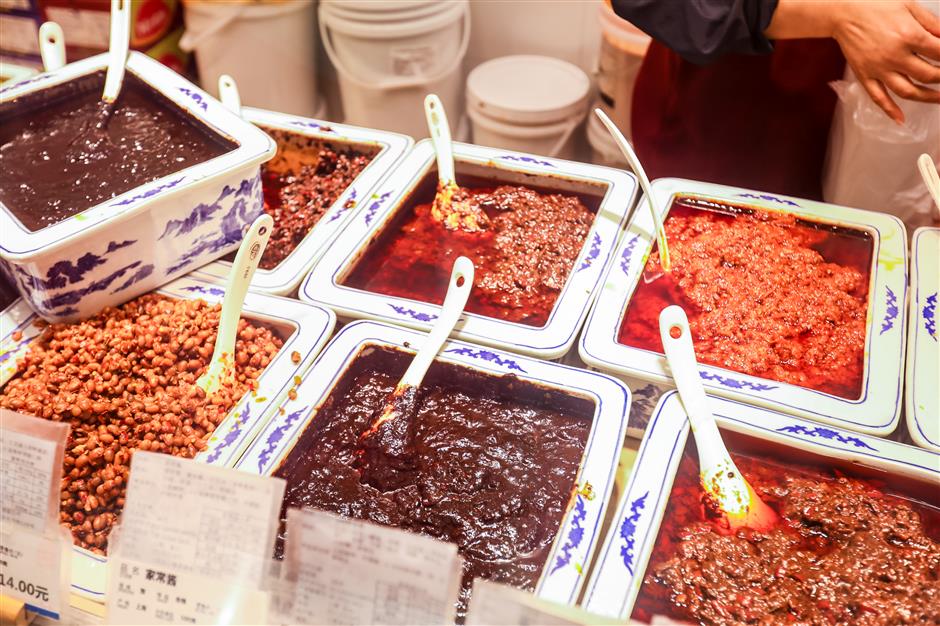 Different sauces are found at a food store on Huaihai Road. 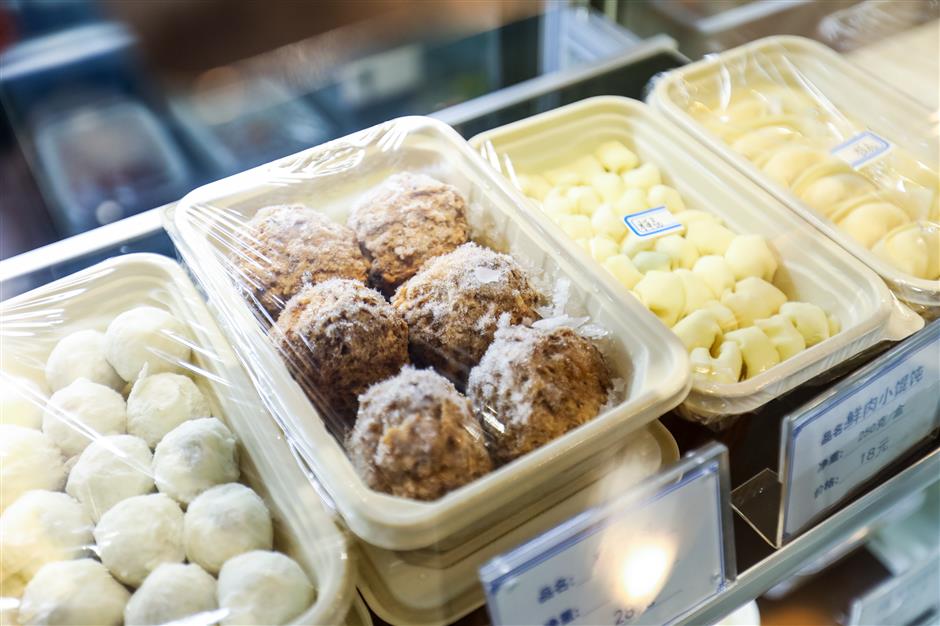 Fish and pork balls are on sale at a food store on Huaihai Road. 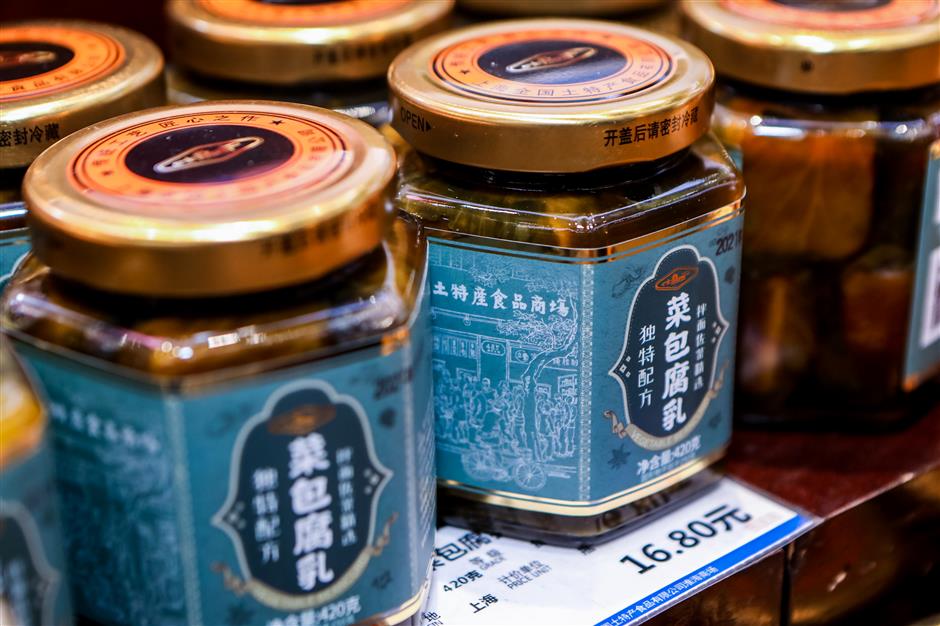 Fermented bean curd is available at a food store on Huaihai Road.

"We require all diners to make reservations in advance to stagger their dining times," Wang said. "The elevators are disinfected every hour, and the dining area is disinfected before and after lunch and dinner."

Time-honored food brands on Huaihai Road have fully spruced up for the Chinese New Year.

It is where the most authentic haipai (Shanghai-style) New Year's flavor can be experienced.

Food stores on Huaihai Road are bustling these days.

Some specialty such as vegetables pickled in soy sauce, fermented bean curd, mooncakes stuffed with pork, old-style Shanghai binggao (literally "icy cake"), a unique local dessert with cream, caramel and almond and sesame balls can be found on time-honored food stores on the street.

A variety of activities are held on Huaihai Road in celebration of the festival.