Ten years ago German Henrik Stefes was an international student majoring in business management at Fudan University in Shanghai.

He put his education to good use in 2018 by co-founding and serving as the director of SNOW 51, an indoor skiing and training facility in China.

Bremen-born Stefes began skiing for the first time when he was 4 years old. He earned his ski instructor's license when he was 17.

Stefes returned to China in 2015 and first worked as a ski instructor. He joined SNOW 51 after meeting its founder during a winter sport exhibition in Beijing, assisting a former coach and directing the coaching department with 200 Chinese and international ski instructors. 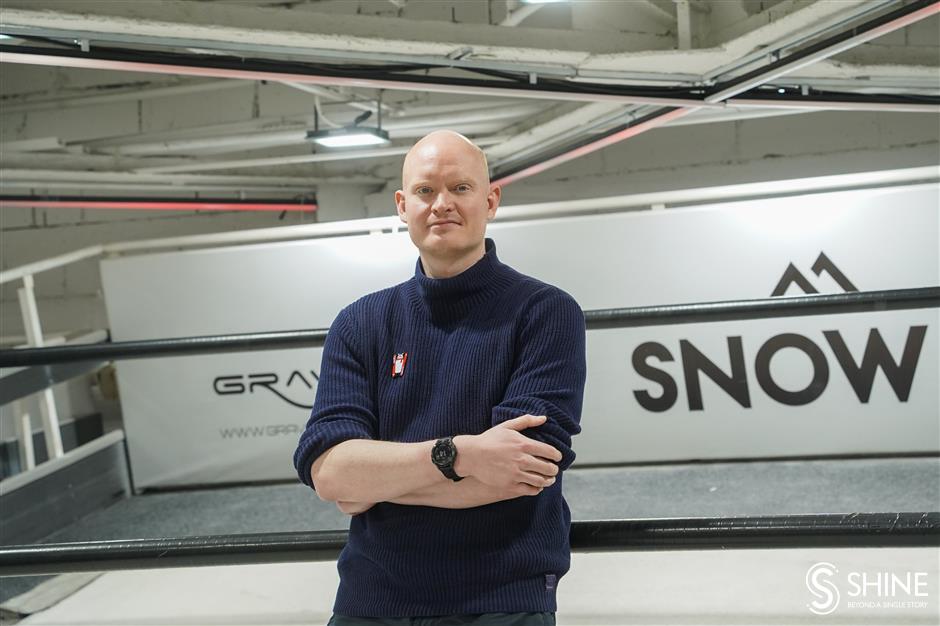 Henrik Stefes is the Ski Experience Center director and co-founder of SNOW 51.

Ice and snow sports are no longer a seasonal thing in China. Many shopping malls have indoor rinks.

The number of participants engaged in winter sports was more than 600,000 in Shanghai in 2017, and it has grown exponentially, reaching 2.8 million in 2021, according to Shanghai Ice & Snow Sports Association.

"It is inextricably linked to people's needs. Winter sports are the most popular among Shanghai residents, ranking second among all sports. It demonstrates the market's enormous potential," Yan said. 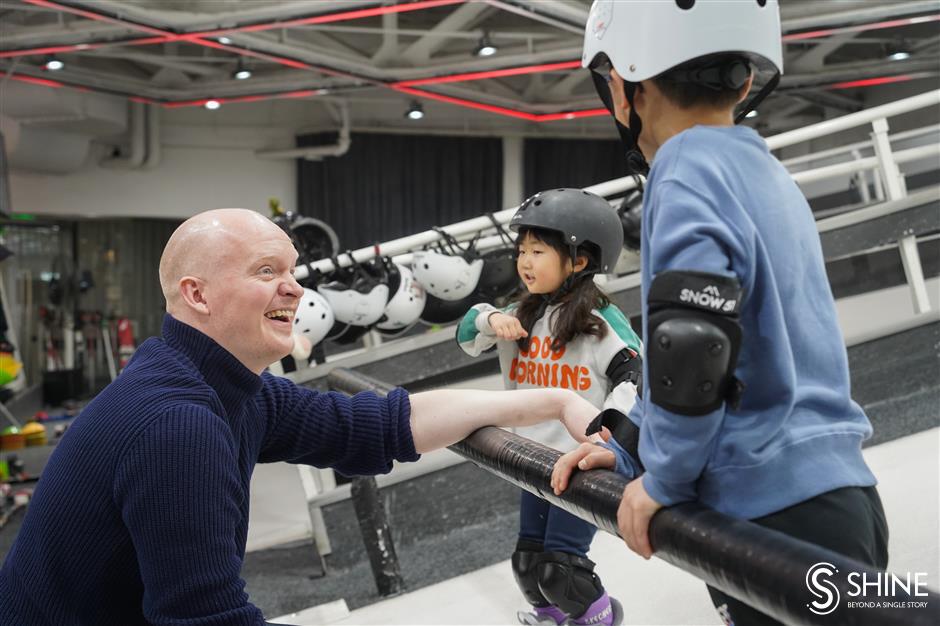 Stefes was surprised to see a large indoor rink on the third floor of the MIXC City in Minhang District, where the first SNOW 51 outlet opened in January 2018.

"It may have been regarded as 'crazy' by some Europeans," he told Shanghai Daily. "Skating is a traditional outdoor sport from their point of view."

Now, SNOW 51 has more than 20 branches around China with 18 stores in Shanghai alone.

"If you are passionate about something, you want to do it every day," Stefes said. "We provide opportunities for southern people to ski every day and let them discover the charm of skiing."

Après-ski activities are an after-skiing culture that is popular in Europe.

Currently, the nearest outdoor ski resort from Shanghai is in Wuxi, Jiangsu Province, but a spectacular indoor venue is set to open in Lingang on the coast of Shanghai's Pudong New Area this year. It will be the world's largest integrated indoor ski resort at 90,000 square meters. 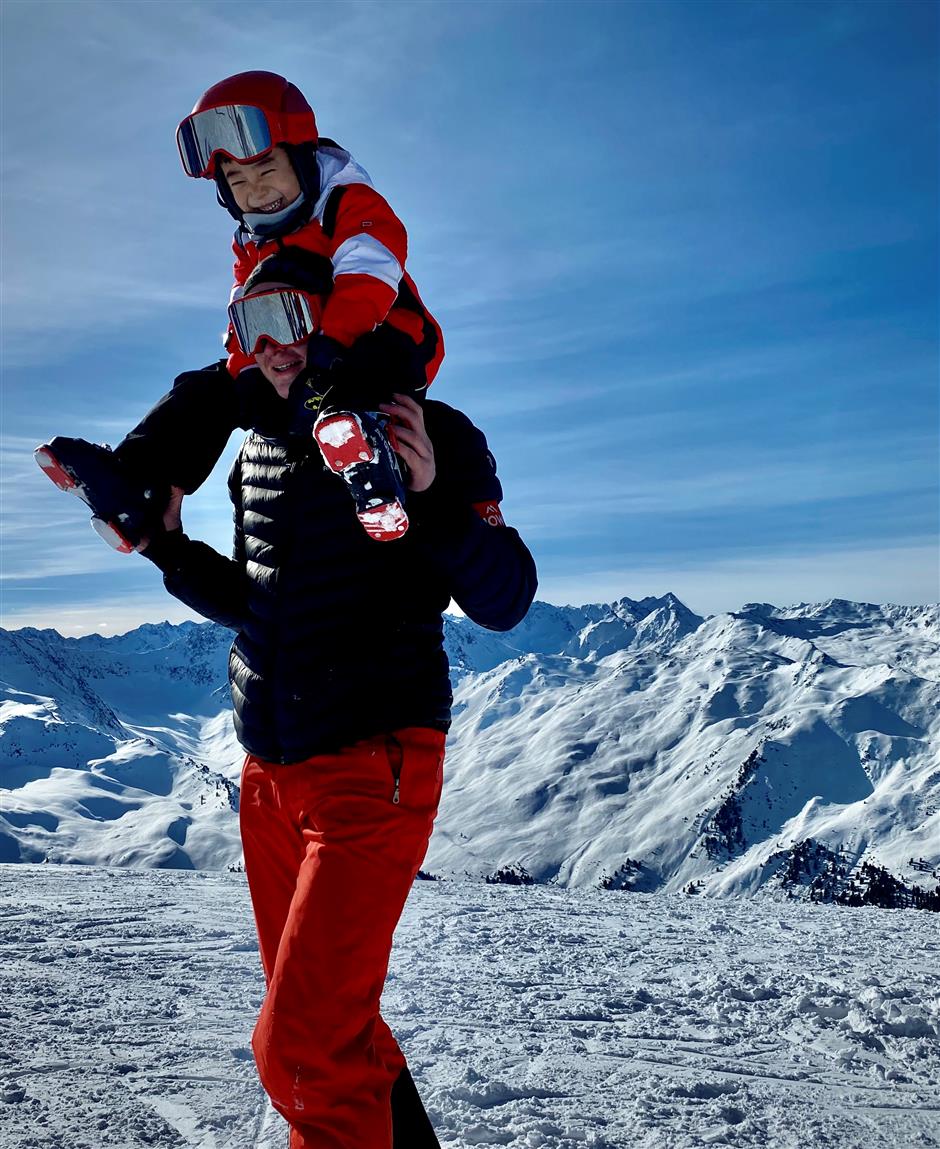 Henrik Stefes enjoys a light moment with his student William in Soelden, Austria.

Stefes has found that the pace of life in big Chinese cities is fast. Parents can only spend a little time with their children. It's also hard for them to find common interests, but he believes skiing is a good choice.

Half of SNOW 51's customers are families, and about 25 percent are children between the ages of 6 and 10. They get ski fans ranging from 2.5 years old to 72 years of age.

"The entry barriers of skiing are low," he said. "Around 70 to 80 percent of customers try skiing for the first time in our stores. Our busiest time is during summer vacation."

There have been some impressive success stories.

William started skiing when he was just over 4 years old. After training in Shanghai for more than a year, Stefes took him to ski in the BIG 3 Rally in Soelden, Austria. It has three peaks at an altitude of more than 3,000 meters.

Although William's parents were worried, they could not accompany him because they did not know how to ski. But after William returned to Shanghai, his father decided to learn skiing with him. 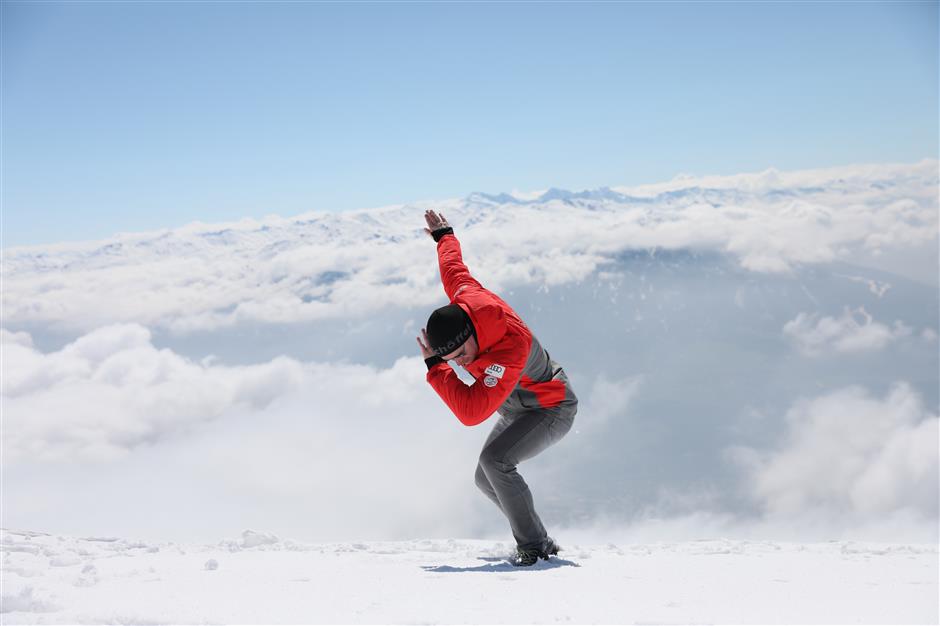 Based on the 2020 China Ski Industry White Book, China has the largest number of indoor skiing centers in the world.

Stefes has been to most ski resorts in China, such as Beidahu, Songhua Lake and Changbai Mountain in Jilin Province, and Thaiwoo and Genting in Chongli of Hebei Province.

"The only problem is some of them lack the historical atmosphere compared with Europe," he said. "But they are really impressive, in terms of the ski village layout, track design and facilities."

Stefes knows that the Altay region in northwest China's Xinjiang Uygur Autonomous Region is regarded as "the paradise of powder snow."

Powder snow is freshly fallen, soft and drier snow. It is the best snow to land on because it does not hurt as much as hard, compact snow.

"I've seen more photos about people taking part in winter sports on social media," Stefes said. "I believe it's mainly because of the fast economic development in China. Alpine skiing is a premium sport for upper middle class and upper class, like golf and fencing. You have to purchase equipment, book hotels and so on."

"But everyone can experience it without the limitation of time and distance in our stores. They can receive systematic training as well, and follow us to ski on the real snow with their instructors in Shanghai."

Looking ahead to the 2022 Winter Olympics in Beijing, Stefes said he is looking forward to watching all the alpine skiing events. "I believe China's Gu Ailing will perform well."

"I also hope that China's athletes can win more medals," he said.

"China will become the world's biggest winter sports market," Stefes said confidently. "Everyone is welcome to try skiing at SNOW 51 hubs and start their own journey from zero to hero skier."