Options galore for 'staycationers' in Shanghai

Welcoming The Year Of The Tiger
Edited by Jiang Xiaowei. Subtitles by Hu Min.

From temple fairs to flower exhibitions to cruise tour, Shanghai has plenty of fun activities on offer during the upcoming Chinese Lunar New Year holiday that starts from January 31. 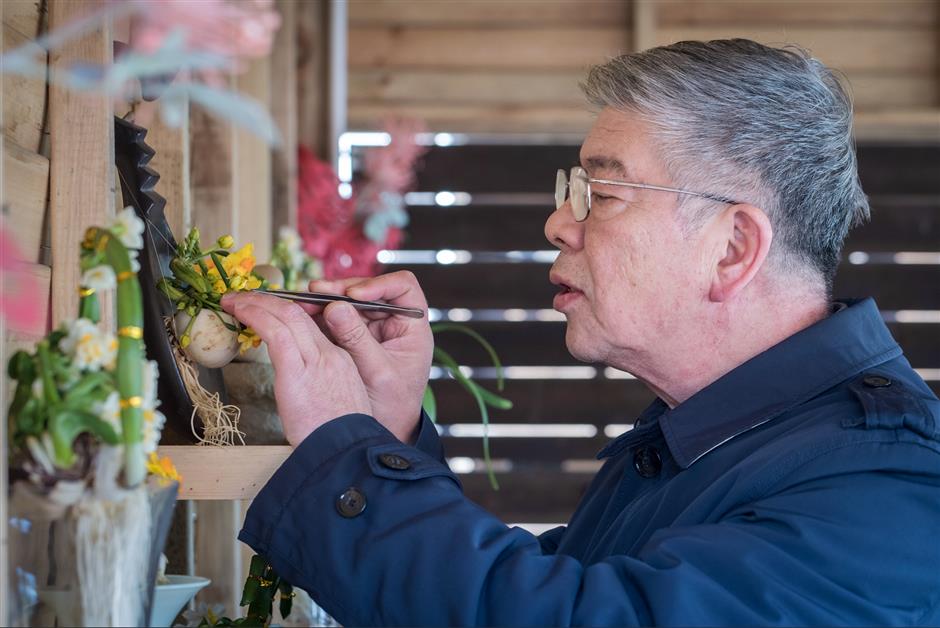 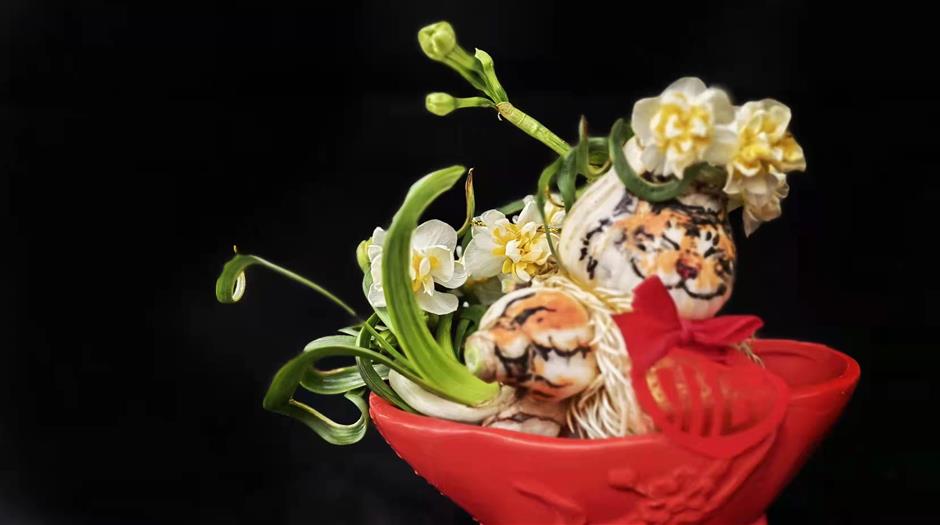 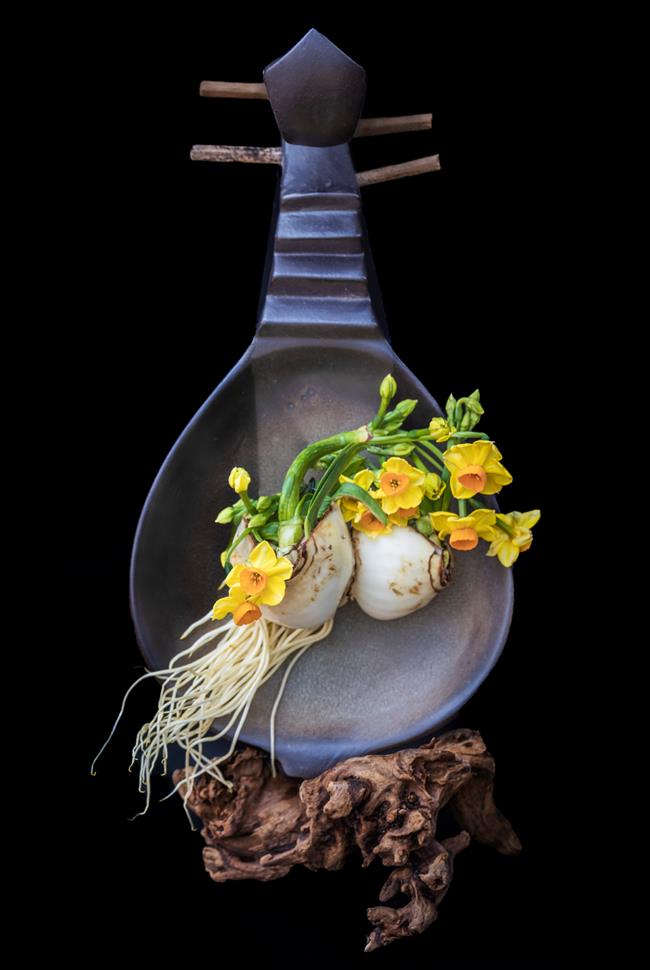 A narcissus on display at Gongqing Forest Park.

The exhibition that will run through the weeklong Spring Festival holiday, comprises three display areas. One is spruced up with a variety of New Year's flowers such as tulips, primulas and plum blossoms replete with lanterns.

Some rare species of narcissus are on display.

Nearly 100 pots of narcissus-carving works by masters and local residents are another highlight of the display.

A narcissus-carving competition will be held during the holiday.

At Century Park in Pudong, a plum blossom exhibition is underway, featuring about 3,000 plum blossom trees of some 30 varieties. It will run through the holiday. 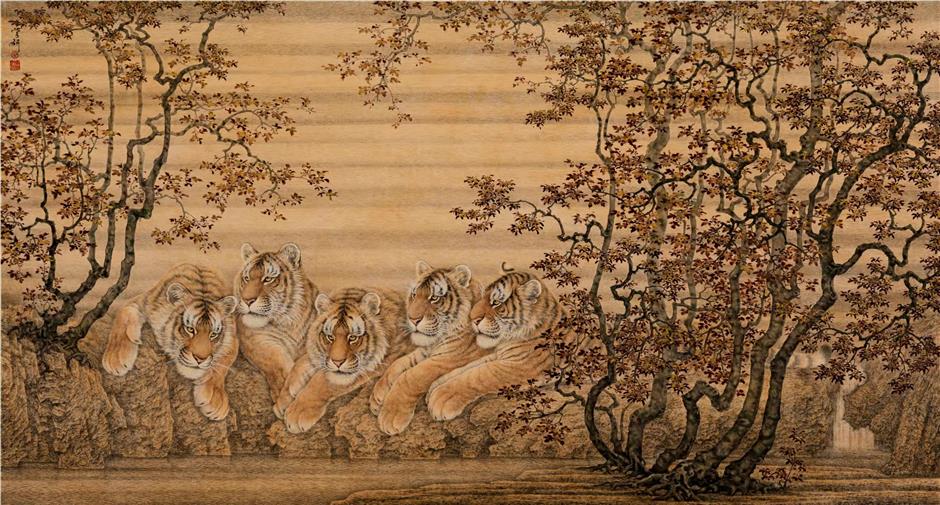 "Five Tigers," a traditional painting by Qin Xueyan. In Chinese, "five tigers" has an auspicious meaning for "five fortunes," which refer to longevity, fortune, peace of mind, kind-heartedness and decent death.

A feast of tiger-themed Chinese paintings is running until February 20 at Lu Yanshao Art Gallery in Jiading District to celebrate the Year of the Tiger. The exhibition features more than 80 paintings from the collection of Qin Xueyan, a famous Chinese painter renowned for his tiger paintings.

A bronze ware exhibition will take people to appreciate the beauty of the ancient art at Shanghai Museum in Huangpu District through February 15.

At Expo Culture Park's Shen Garden, more than 50 palace lanterns will be on, inviting visitors to take hanfu (the traditional dress of Han Chinese people) photos.

The Shanghai Science and Technology Museum, Shanghai Natural History Museum and Shanghai Astronomy Museum will be closed between January 29 and 31 for equipment maintenance and repair. The three museums will open between February 1 and 6 during the holiday. 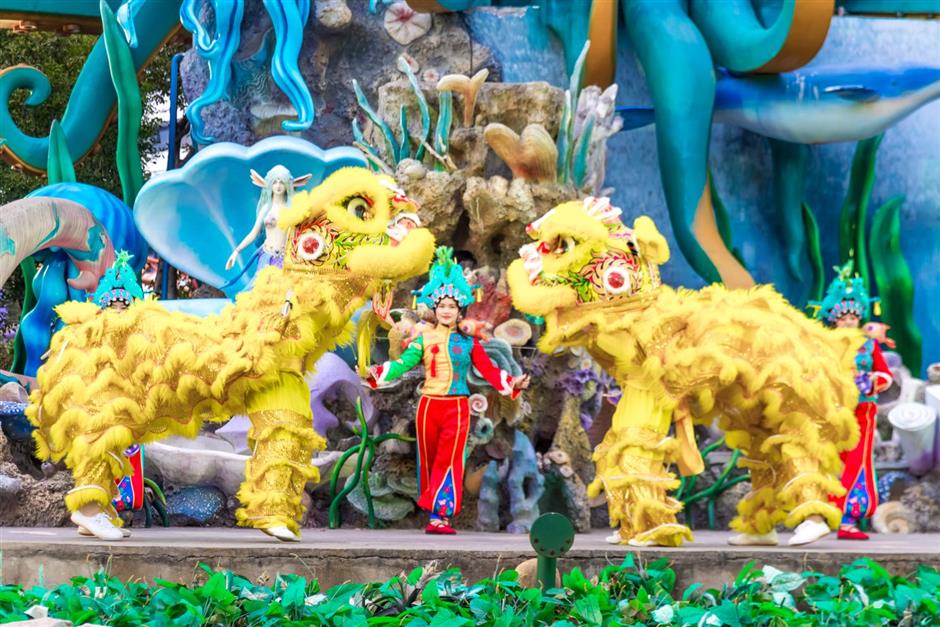 The city's iconic Huangpu River cruise tours will host intangible cultural heritage activities such as a display of Duoyunxuan woodblock watermark prints, and a number of cultural activities will be staged onboard during the holiday.

Children will be treated with DIY experiences such as making "red envelopes" with woodcut techniques.

Strict COVID-19 prevention measures are in place to curb the spread of the virus.

All passengers are required to make reservations in advance and have their temperatures and health QR codes checked on the spot. They are also reminded to keep social distance and properly wear masks onboard.

Disinfectants are offered at public areas onboard. 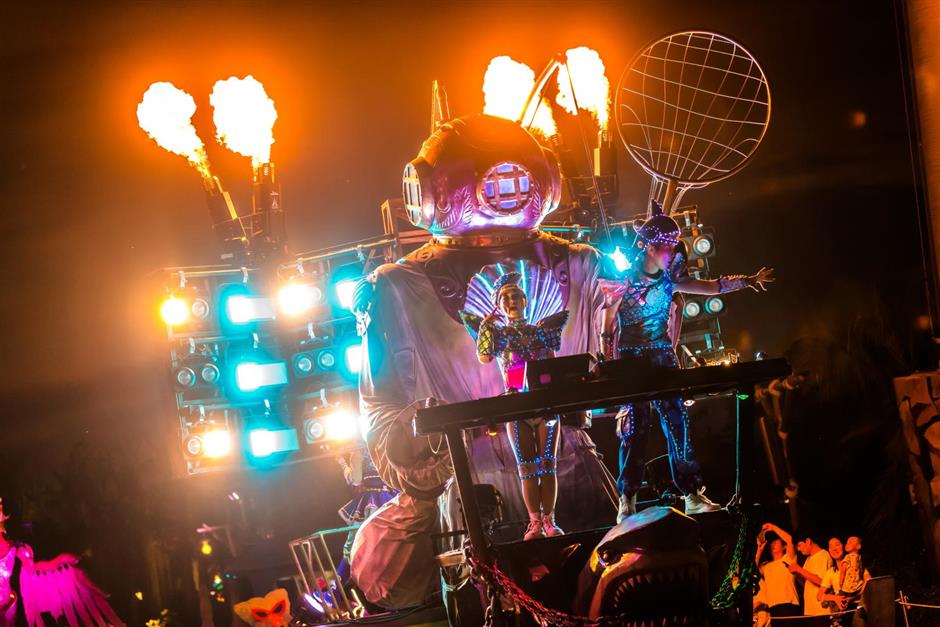 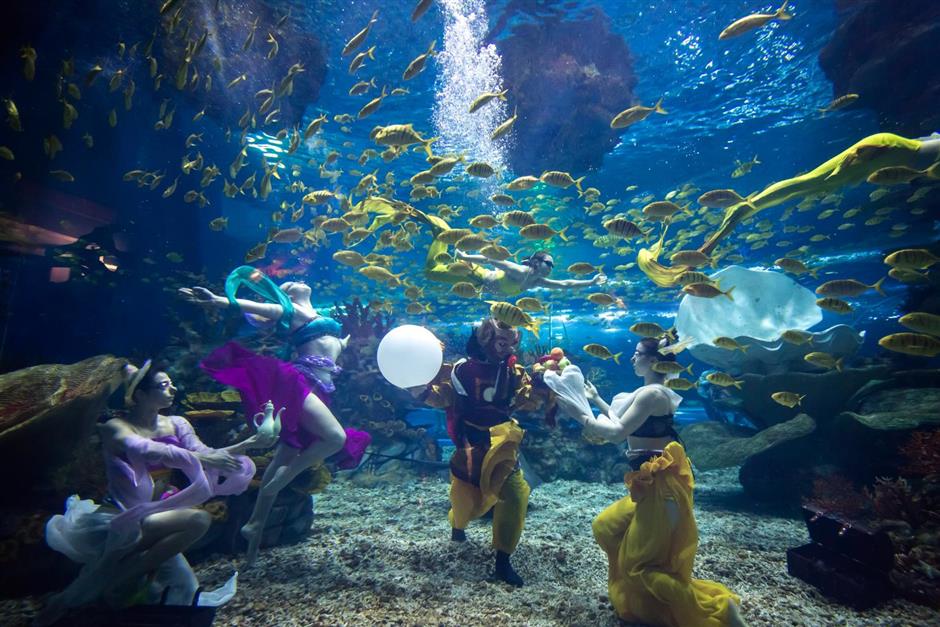 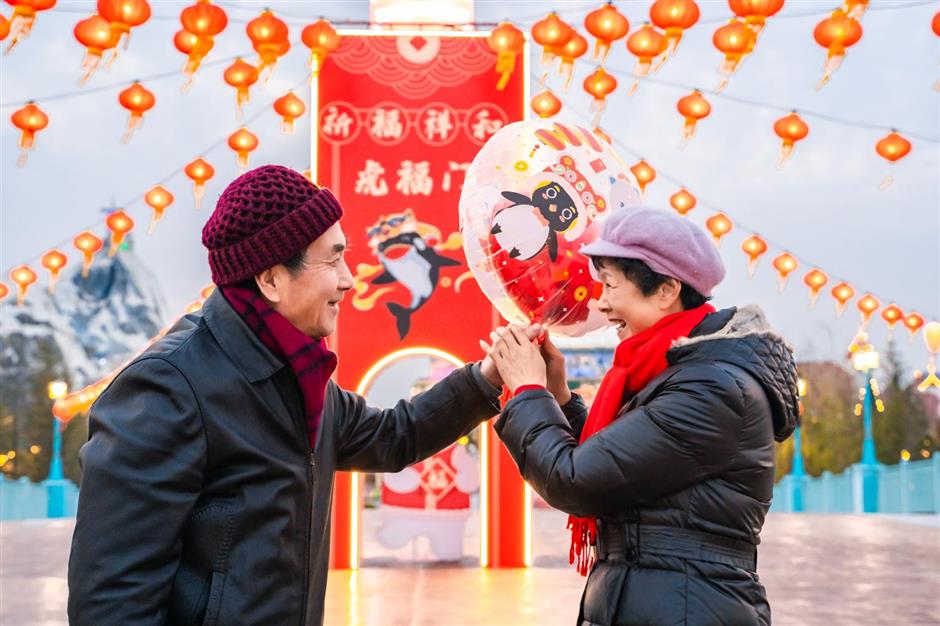 Celebrate the upcoming Chinese Lunar New Year with joy at Haichang Ocean Park, which has been fully spruced up.

Shanghai Haichang Ocean Park in the Pudong New Area has prepared a temple fair and nearly 100 festive performances during the holiday. Ocean float parades and mermaid shows will also be staged.

A water-curtain light-and-shadow show will illuminate the night sky, and a punk rock parade will pump up the volume.

A temple fair will tempt people's taste buds with nearly 100 types of nianhuo (New Year's goods) and delicacies from across the country. Visitors are invited to play fun Spring Festival games to win gifts at the temple fair.

"Visitors need to have their temperatures as well as health and travel codes checked before entering, and they will be reminded to keep their masks on and maintain social distance during tours," said Li Wanrui, an employee at the ocean park.

"Disinfection is carried out three times daily in public areas, and the disinfection interval on amusement facilities is once every two hours," said Li. "Disinfectants are placed in hand basins inside public toilets and there are exclusive bins for the collection of used masks."

Round-the-clock monitoring of visitor flow has been implemented, and emergency evacuation exits are accessible at all times. 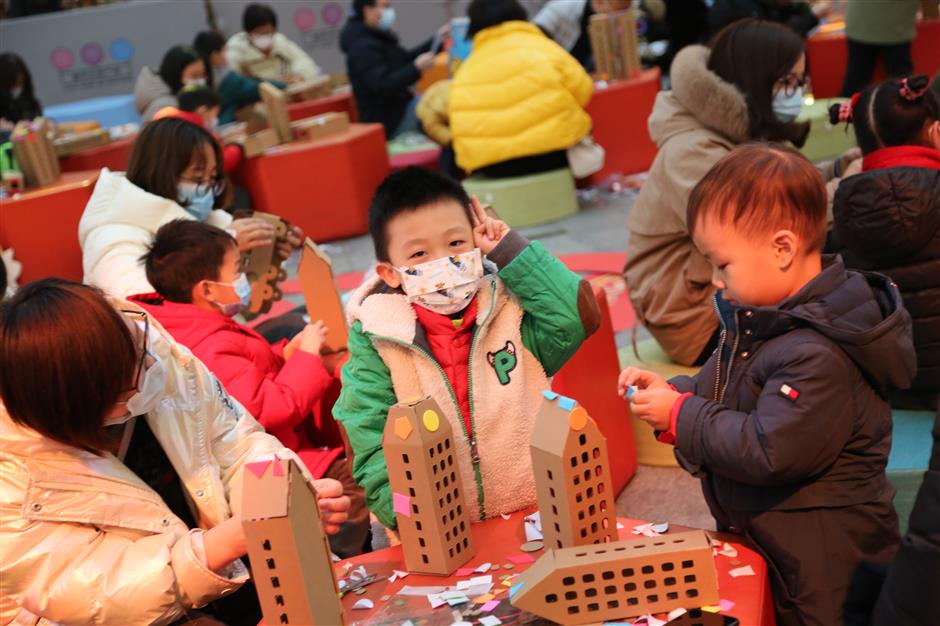 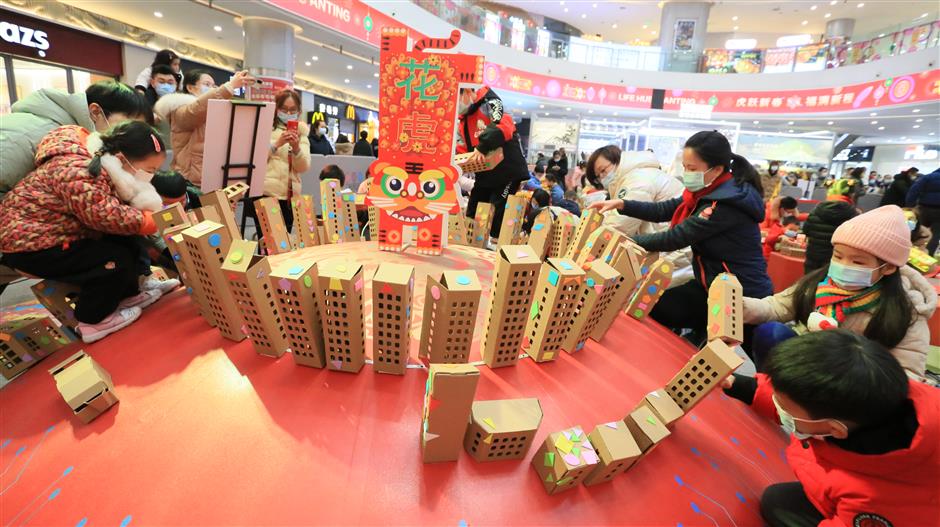 A flourishing "city of the future" with the application of the old craft of paper-cuts has been created at the mall.

Children used paper-cuts to reveal their imagination on future cities and green-energy housing after learning about global warming.

The "city" was illuminated after people cycled to generate electricity.

In an innovative way, a blend of paper-cuts, Chinese knots and 3D printing was featured, promoting Chinese culture to visitors.

Kids also created a 10-meter-long koi fish via paper-cuts, carrying the auspicious meaning of "May there be surpluses every year" (niannianyouyu).

During the holiday, traditional dragon and lion dances will be performed and Chinese folk music will ring throughout the mall.

Shadow plays and acrobatics shows will also be staged.

A temple fair will be held with inheritors of intangible cultural heritages showing off their exquisite skills, and customs and crafts related to traditional Lantern Festival will be replicated.

In Shanghai, close to 90 percent of hotel bookings for the holiday have been made by locals, and bookings for rural hotels from city residents soared 88 percent from the same period last year, according to Trip.com.

Online travel review site Mafengwo said an increasing number of young people are looking for nianwei (New Year flavor) in their home cities under the staycation trend, with relevant searches for such experiences rising 40 percent in the past week.

"The consumption concept for young Chinese people has changed significantly in recent years," said Ma Yutao, a tourism analyst. "They have shown a preference for in-depth tour programs. Moreover, guochao (trend steeped in Chinese tradition) is also popular in tourism among young people." 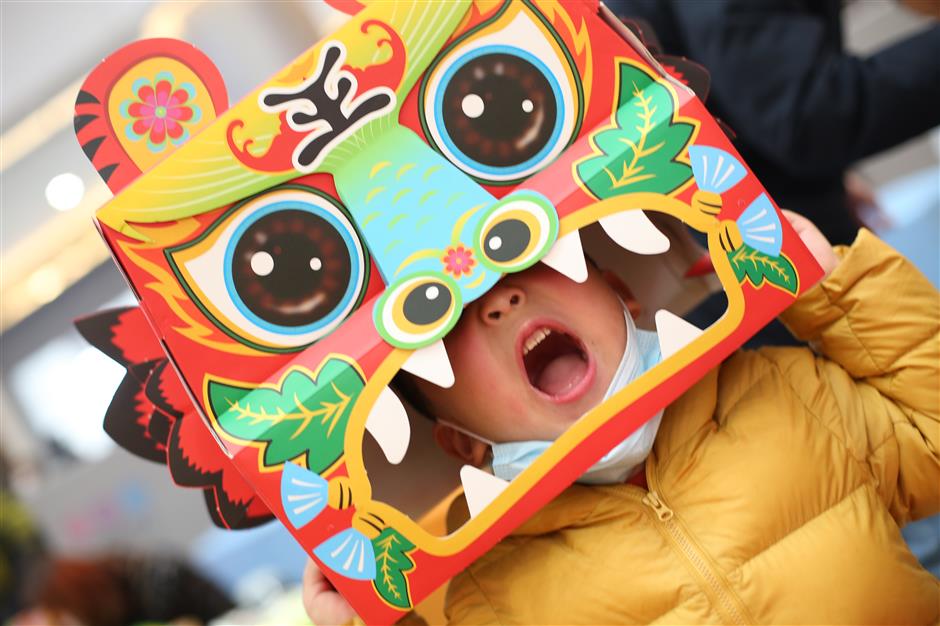 A boy plays with a tiger paper-cut work at Life Hub@Anting Plaza to celebrate the Year of the Tiger.

The "staycation" travel trend will dominate the holiday with domestic travelers responding to the government's call to avoid unnecessary trips outside their hometowns to curb the spread of COVID-19, travel operators said.

Shanghai-based online travel operator Trip.com said earlier that about 65 percent of its tour products booked for the holiday involve travel within provinces or municipalities where bookers dwell.

Shanghai, Beijing, Chengdu, Guangzhou, Shenzhen, Hangzhou, Nanjing, Chongqing, Wuhan and Suzhou are the 10 most popular cities for "staycationers" based on tour booking figures.

The trend has boosted the consumption of minsu (Chinese version of bed & breakfasts), luxury hotels and rural tourism, Trip.com said. Nearly 60 percent of hotel orders for the holiday have come from local residents, with parent-child, hot spring and leisure-style hotels favored.

So far, Shanghai, Beijing, Sanya, Guangzhou and Chengdu have the most hotel bookings during the holiday, while hotels in rural areas are the most popular among families with children, with relevant bookings surging 113 percent from the same period last year. 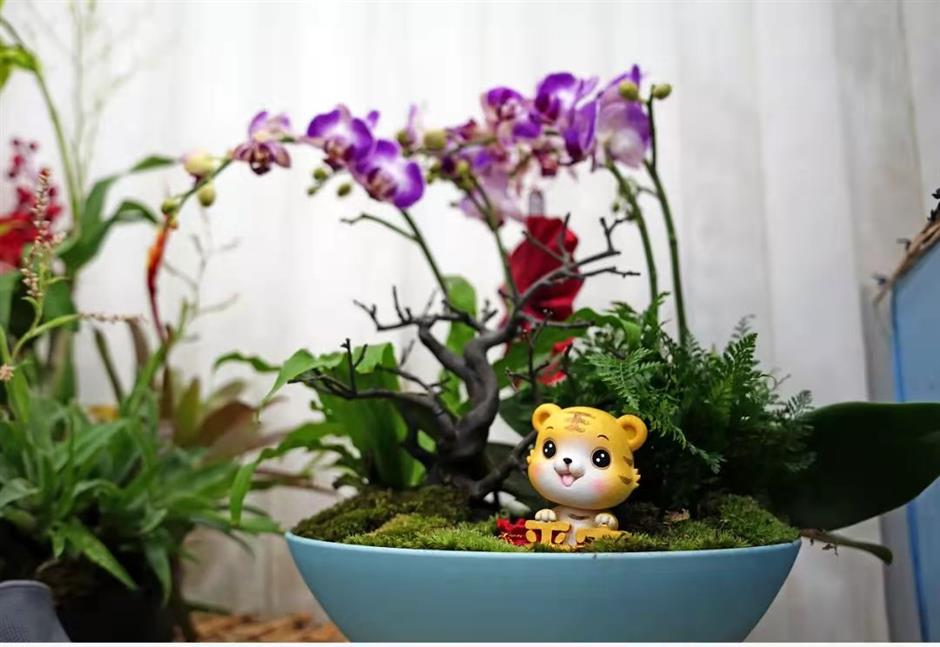 A plant with a tiger decoration at Shanghai Botanical Garden