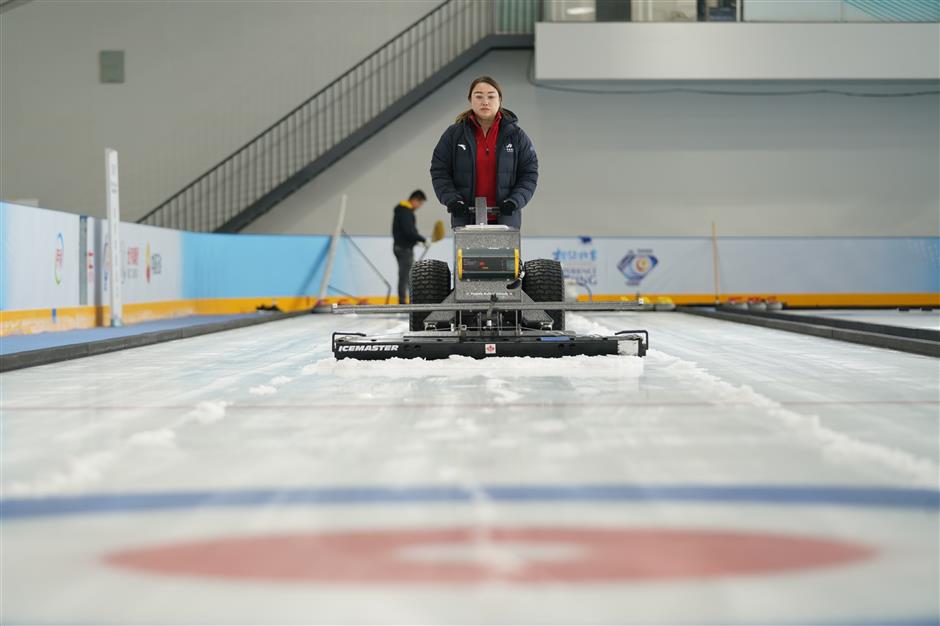 Zhang Zhiyuan prepares the surface of the ice at the "Ice Cube" in Beijing.

The curling competition for the Beijing 2022 Winter Olympic Games is set to begin next week, and Zhang Zhiyuan and her team of about 20 ice rink technicians are working around the clock to ensure a smooth start to the Games.

The curling mixed doubles will begin on February 2 at the National Aquatics Center, better known to the world as the "Water Cube." It has been renamed the "Ice Cube" for curling and wheelchair curling events.

"We take a bus to the venue at 6am every day and return to the hotel at 8pm, sometimes even around midnight," Zhang, who has been working on the rink for over two weeks, told Shanghai Daily.

Her mentor, Mark Callan, one of the best ice technicians in the world, is working with them. It is his third Olympics and second Paralympics.

"We have to ensure that it is a game of skill and not luck," he said.

"In order to create the best possible conditions, we have to monitor the air temperature, the humidity and the dew point. We also keep an eye on the outside weather conditions as well at people arriving in the venue can be wet and that affects our conditions." 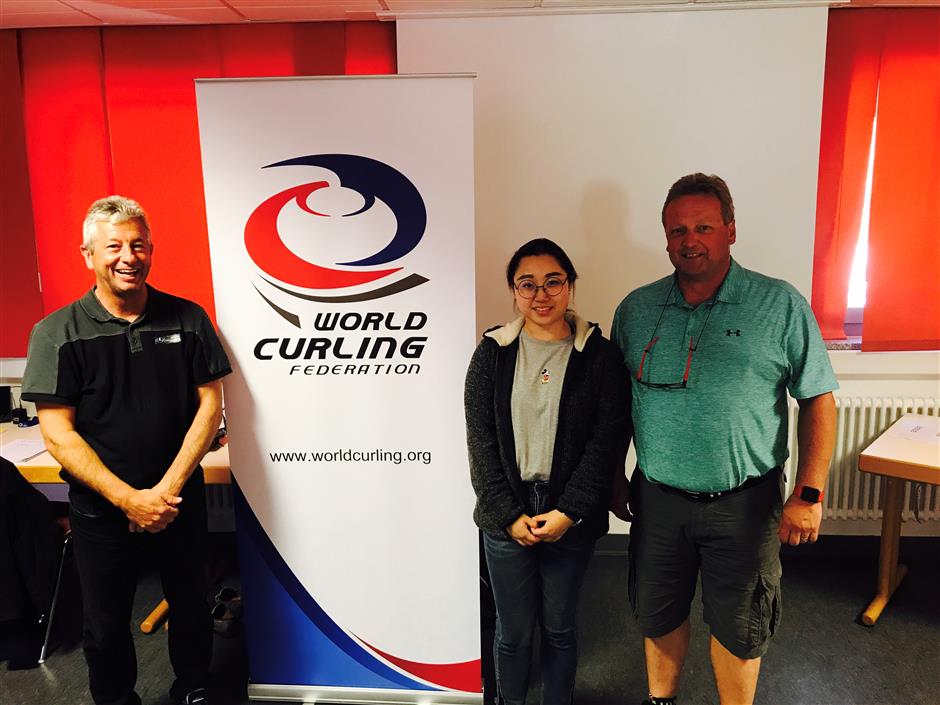 It is not as easy as it seems to make perfect ice for curling.

The ice rinks for different winter sports may seem the same, but in fact, their requirements for thickness, smoothness, and evenness are quite different.

"Ice skates are worn in most ice sports like skating and ice hockey, but they will destroy the ice for curling, in which players slide stones on a sheet of ice," the 27-year-old Zhang said, calling it the most demanding task of any indoor ice sport.

To be specific, tap water is fine to form ice for most rinks, but curling requires purified or de-ionized water.

Unlike others, the ice for curling is dotted with goose bump-like ice points called pebbles, and it requires a unique technique called pebbling.

Ice technicians have to spray water evenly across the ice to create a layer of pebbles. They increase the slipperiness of curling lanes, and without them, curlers can't push the 20-kilogram stone. Purified water can freeze faster and harder, and thus it can help pebbles to last to the end of the game.

Yes, it's physical work! She remembers walking about 20,000 steps on average while working at a sports school in Shanghai's Xuhui District.

Zhang's ties with curling can be traced back to 2009, when the Chinese women's curling team won gold medals at both the Winter Universiade and the World Women's Curling Championship. 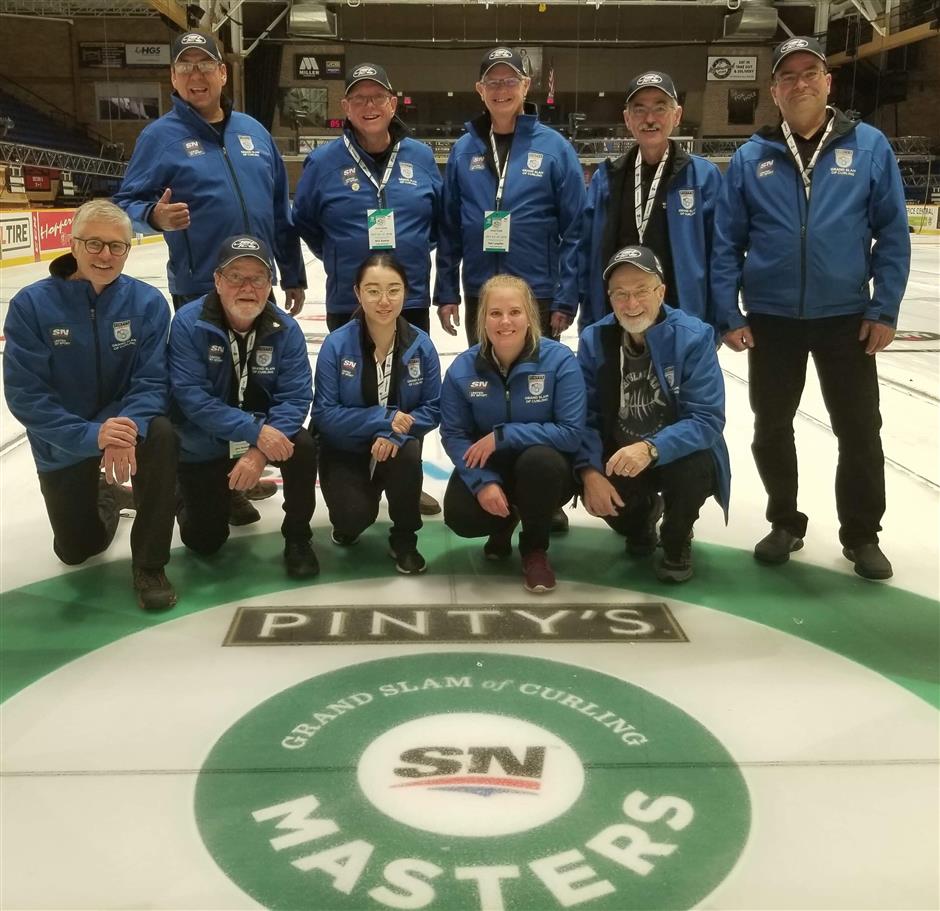 Zhang Zhiyuan (front, center), an ice technician, poses with her colleagues during the Grand Slam of Curling in Canada.

The Universiade was held in Harbin, her hometown, and all four curlers were also from Harbin. "At that time, local media were providing saturation coverage. So, I grew interested in curling and became a curler," she said.

But to be a professional athlete requires training all day, and she did not want to give up schooling. She dropped the idea completely, about which, she still has some regrets.

In 2015, she went to Loughborough University in the UK to do her postgraduation in sports and economics.

"At that time, Beijing had just won the rights to host the Games. I thought my major would bring me closer to curling," she said.

Twice or thrice a week, she would take an hour's trip by train to another town to play curling at a local club. During a trip to Scotland, the home of curling, she met Callan, who introduced her to the job of an ice technician.

It is a job with some novelty, says Callan.

"There are never two days that are the same in our job and that is one of the things I like about it," he said.

In 2018, Zhang was recruited as a curling coach and ice technician by the Shanghai Curling Association to train young curlers.

"Shanghai leads the country in fostering young talent. When they grow up, they will become great athletes," she said.

"There are probably just 10 of us," she said. "I hope more people can learn about our job, and I can be the world's top ice technician like my mentor."