Is Gu Ailing edging closer to Yao Ming in terms of popularity? 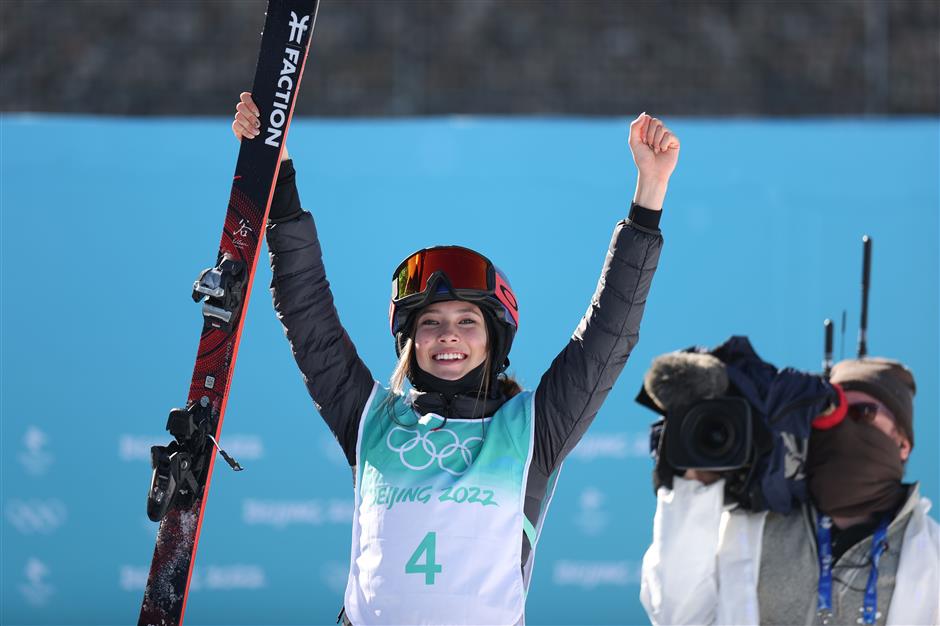 Chinese skier Gu Ailing, or Eileen Gu, is already a star beyond the sports podium, with a huge base of global fans and charming personality, and despite her age is soaring in popularity to being considered "like a legend."

Her gold medal victory in the 2022 Winter Olympic Games in Beijing has propelled the 18-year-old to a new peak in financial and career choices.

Californian-born Gu won gold for China in the inaugural women's freeski big air event with a stunning jump she had never tried before.

"I hope this inspires more girls to take up freeskiing," she said after winning the event in which she beat several more famous and experienced competitors.

Gu is now a "top stream" celebrity in China with a flood of brand endorsement contracts. She has gone viral online as well as in the real world. The buzz is building the young skier into a legendary Chinese sports star, approaching the rank of popular basketball icon Yao Ming.

Her face appears in newspapers, on TV, in social media and on elevator LCD screens. Her apparel and related products sell out immediately. China Mobile's Migu, endorsed in cooperation with Gu, said her signature edition figures sold out "within seconds." 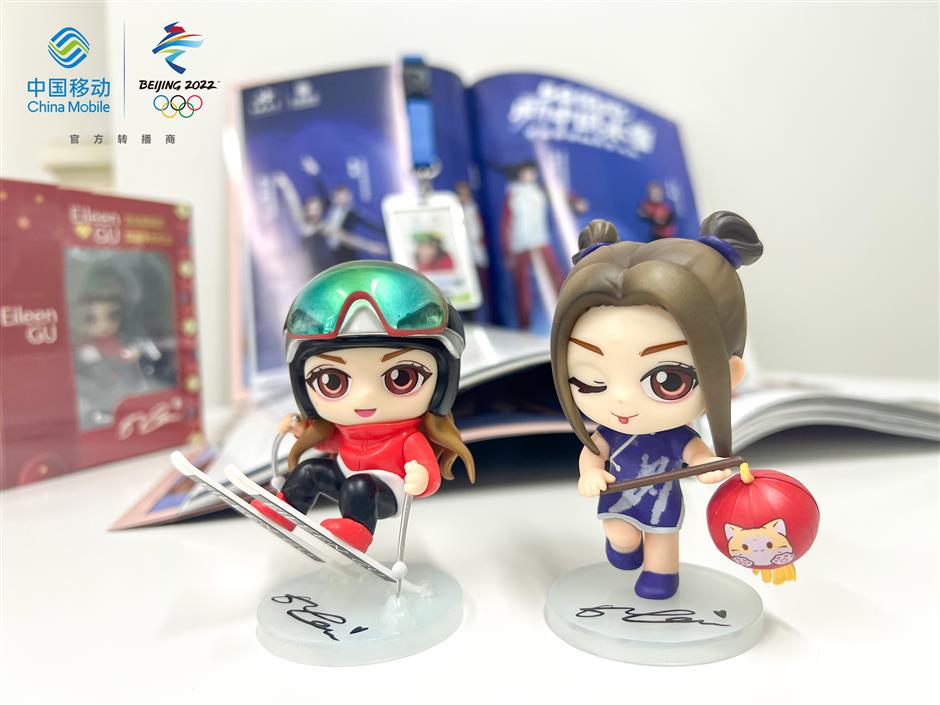 The Gu Ailing mascots are as difficult to get as Bing Dwen Dwen, the official Winter Olympics mascot, netizens said.

"I picked up at least 10 calls inquiring about brand endorsement with Gu today, one after another almost nonstop," said Naomi Lu, CEO of BM Communications, a Shanghai-based marketing and consulting agency.

Gu is considering a growing list of endorsements, covering all sectors from telecommunications, finance, food and beverage to electronics. They include Anta, China Mobile (Migu), JD.com, Louis Vuitton, Red Bull, Tiffany and Luckin Coffee, a Chinese chain with a Gu-recommended coffee and cup set, according to agencies and media reports.

The prices for Gu's endorsement are hiking, from US$1 million previously to current US$2.5 million, said industry insiders including Lu.

They come close to, or surpass, the endorsement prices of top Chinese sports stars such as Yao Ming, hurdler Liu Xiang and tennis player Li Na. Their peak endorsement prices were up to 20 million yuan (US$3.12 million), agencies said.

"She is no doubt a top star now, both domestically and globally," said Lu, who is involved in many sports marketing contracts.

The brands' confidence in Gu and clamor to invest are not without justification.

Since her gold medal win, Gu has appeared in 20 of the most trending keywords on Weibo, earning over 800 million clicks. She is very active in Douyin (Chinese version of TikTok) and Instagram, interacting with netizens during competition.

In China, skiing is not a popular sport like it is in the West. It's valid to question why Gu has become so loved by so many people, way beyond only skiing and sports fans, industry insiders said. 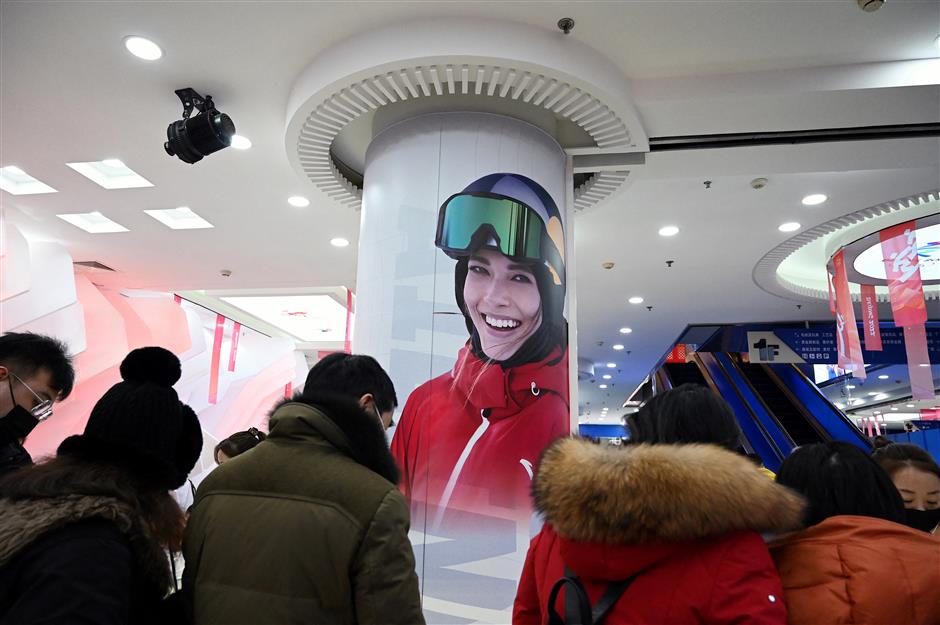 This photo taken on February 7 shows a portrait of gold medalist Gu Ailing on a column inside a Beijing Winter Olympics souvenir store at the Wangfujing shopping mall complex in Beijing.

Various sport stars have "traits" and companies strive to match them with brands and products. Sport stars' stories and unique experiences are also plus points for endorsement, said Qiu Lijin, a sports marketing expert from the School of Management, Fudan University.

Gu obviously has many "plus points" and "labels" for sports endorsement, like love of homeland, girl power and diversified life roles, Qiu said.

First, Gu is only 18 years old, giving her a potentially long sporting career laden with possibilities and expectations. Normally speaking, a freestyle skier is active into their 30s.

Gu's strengths, coming from her age and good living habits, allow her to compete in multiple events. She could walk away with three Olympic medals in Beijing as she is competing in big air, freestyle halfpipe and slopestyle.

Secondly, Gu's love for China has earned a huge base of new Chinese fans.

With a Chinese mother and an American father, she has captivated China since switching allegiance from the United States in 2019. During the Beijing Winter Games, she has won honors for China.

Brands in stationery, fashion and home appliance are "very interested" in Gu endorsements, said Lu, who expects prices to soon come close to or surpass top entertainment stars in China.

Thirdly, Gu's personality is adding to her appeal.

In Beijing, she was asked how to deal with debates on her nationality and identity.

"I think sports can unite us all together, rather than being a divisive force. I don't think sports should be linked with nationality, for we are here exactly in the hope of exploring human limitations," Gu replied.

Gu's inspiring words are being widely spread in social media and are adding to her positive acceptance.

"Every time before I did a new trick on the snow, I am afraid. But now I am more afraid of not even trying or setting limits for myself. Fear has kept me going and fighting," she has said.

Her attitude fits the Olympic and sport spirit and is echoed by netizens in China and globally, including many young people.

Luckin has issued an early invite for Gu Ailing to endorse its coffee.

Fourthly, Gu has a diverse lifestyle compared with other sports people.

Besides being a ski prodigy, she is a grade-A student, Vogue cover girl and a social media celebrity.

People are naturally interested in her education and the reasons behind her success at such an early age. Related stories are spreading extensively online, reaching out to wider circles of consumers beyond only sports fans.

But Gu is not alone, despite the current wave of interest and the clamor of willing sponsors.

For example, Xiaomi invited Su, the first-ever Asian sprinter to break the 10-second barrier for 100 meters in track and field, to endorse its flagship smartphone with "fast and powerful" features.

The Tokyo Olympics and Beijing Winter Olympics have heightened the focus on Chinese sport stars who are often seen as national heroes.

In 2022, the revenue in China's winter sports industry will reach 71.4 billion yuan (US$11.1 billion), up 20 percent year on year. The major target groups of the industry are aged between 27 and 39 and have considerable consumption power, according to ii-Media Research.

Revenue from the female sports market will grow rapidly within the next few years, according to Deloitte, from a surging demand that blends sports and fashion.

Sports stars have positive and healthy images compared with entertainment stars who are prone to rumor and scandal, according to Lu and other marketing insiders.

Brands from various industries have invited Gu to endorse their products.

China is on a fast track to becoming a major player in the sports endorsement industry. It has tremendous potential. Sports marketing expert Qiu, on the other hand, believes that the business is still waiting for long-term triumphs and "win-win" situations such as Nike and Jordan.

Industry officials should consider how to maintain sports stars' exposure and expand their influence when there are no sporting events happening, Qiu added.

But it seems Gu won't need to worry about such issues. Besides her diverse roles, she can co-design apparel with fashion brands and collaborate on other products.

In online shopping websites, consumers are flooding to buy the products she wears and uses in competition and those she otherwise endorses.