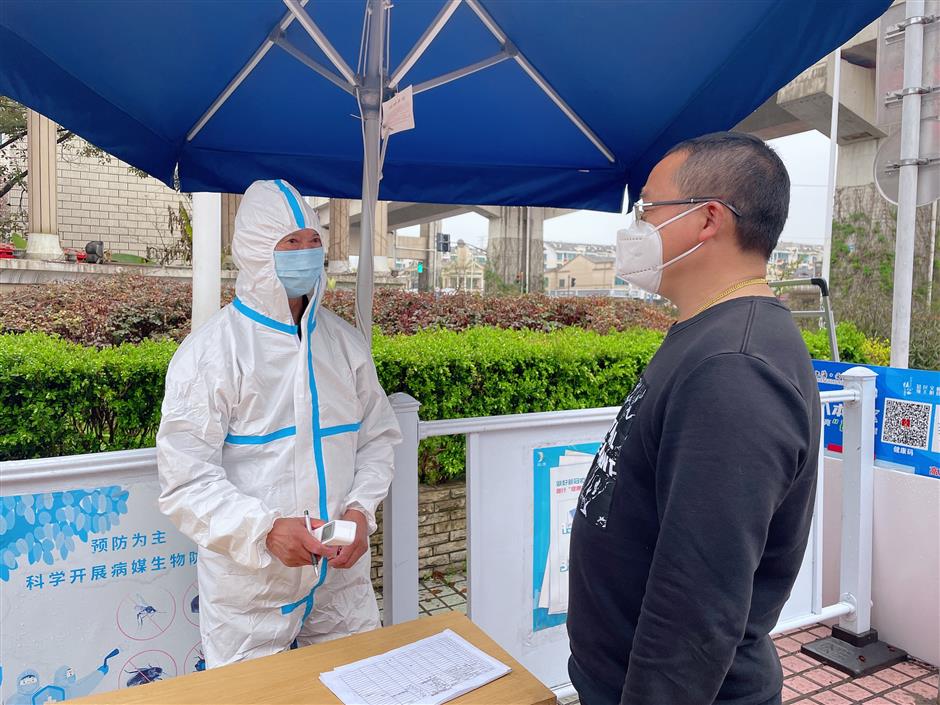 Fang Shanhao (left) checks the temperature of a resident at the community entrance in Xidu Subdistrict, Fengxian District.

Against his senior age of 90 years, Fang Shanhao is among tens of thousands of local volunteers assisting with Shanghai's "grid screening" to curb the ongoing pandemic outbreak.

The retiree in Pujiang Community, Xidu Subdistrict, on the outskirts of Fengxian District, is thought to be the city's oldest volunteer fighting against COVID-19 along with medics, community workers and other professionals and citizens.

Photos of Fang wearing white hazmat suit and standing straight late at night at a nucleic acid testing site have gone viral online and inspired more to take part in the voluntary work.

Shanghai has launched a massive round of nucleic acid testing among local citizens to curb the spread of the virus.

Residents of the city's "key area" subdistricts and towns, which have a higher risk of infection, are receiving two nucleic acid tests within 48 hours, known as the "grid screening." It is a challenging task for a megacity with a permanent population of over 25 million.

Citizens are encouraged to serve as volunteers to help community workers maintain order and guide residents to do the testing.

Fang, a Shanghai native, said he "rushed" to the testing site from his apartment on the sixth floor after learning that the neighborhood committee was recruiting volunteers. He wore a mask and kept his hat low to conceal his age and was successfully recruited.

"I'm completely qualified for the voluntary task with my current health condition," Fang said. "I think it is the duty of a retiree to do something to repay the society during the pandemic."

Fang Shanhao at the community entrance

He was assigned to the entrance of the neighborhood to try to persuade residents to stay at home during the screening. Some people didn't understand the quarantine measures at first, but soon accepted them after Fang's patient explanation.

"I'm familiar to them, so nobody would yell at me," he said.

Since the grid screening was launched on Wednesday, Fang stood at the neighborhood entrance between 7am and 4pm every day. He said he felt no tiredness, but was happy and satisfied.

"A community is a cell of the society," he said. "As long as we are united, our country will become better and stronger."

Fang said he has been joined since March by many other retiree and student volunteers during this round of resurgence in Shanghai.

Before retirement, Fang worked for the China Telecom Shanghai branch starting as a grassroots worker and then rising to a deputy director.

"I always want to serve the country, and retirement gives me the opportunity," said Fang.

He said when he was at school age, he signed up to join the Chinese People's Volunteer Army for the Korean War (1950-53), but was rejected because he was too young. It has been a lifetime regret.

So during the ongoing "war" against COVID-19, he signed up to join it without hesitation. 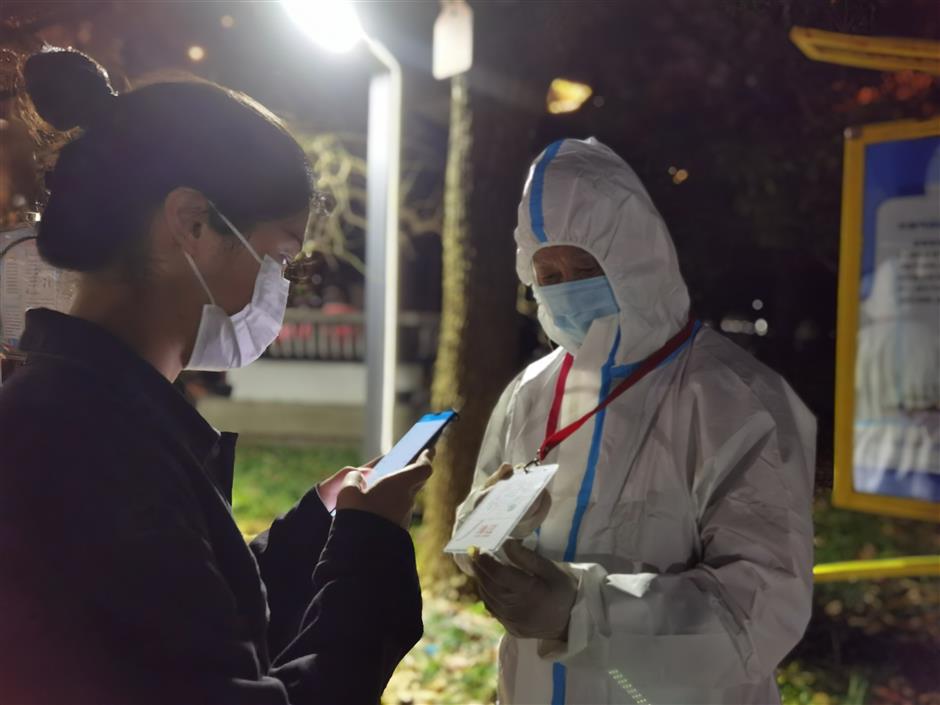 Fang Shanhao works into the night.

After the COVID-19 first broke out in 2020, Fang, then 88, applied to serve as a community volunteer, but was declined by the neighborhood committee considering his age.

He then donated 5,000 yuan (US$786), his monthly pension, to aid the prevention and control work.

Cai Yuhong, Party secretary of the neighborhood committee of the Pujiang Community, said Fang has always been actively taking part in community work. He is also a member of the community's volunteer cleaning team.

"We tried to persuade Fang to give up (volunteer work), but he insisted on serving the residents," said Cai.

The neighborhood committee then assigned him to a relatively safe and light post and asked other young volunteers to look after him in secret.

During the last round of quarantine and screening at his community on March 13, Fang stood at the nucleic acid testing site for five hours a day to maintain order and remind people to wear masks properly.

"Inspired by hime, an increasing number of residents have applied to be volunteers," said Cai. 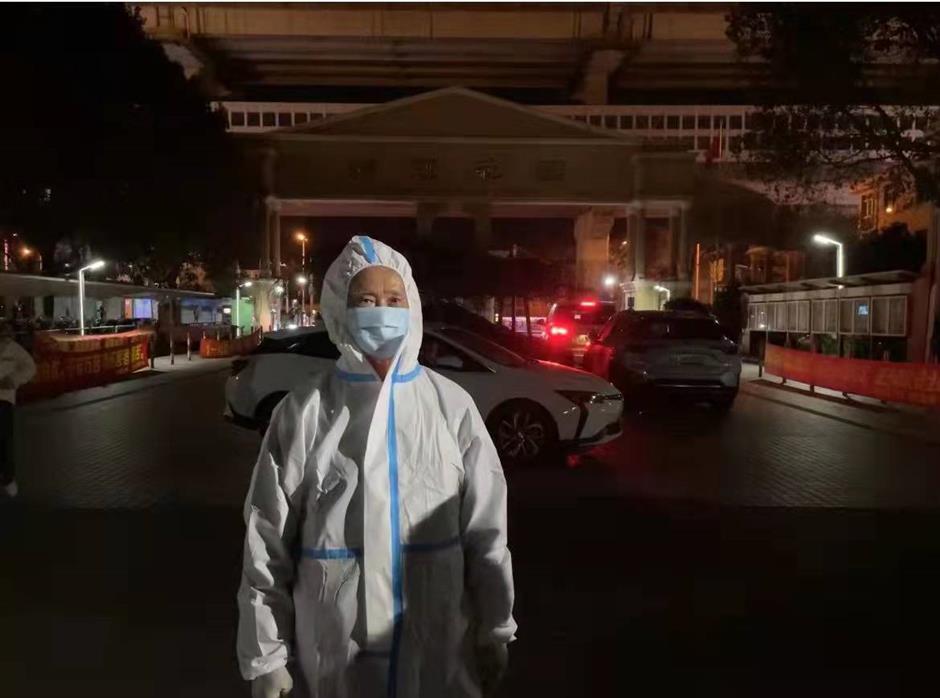 A photo of Fang Shanhao on duty taken and posted by artist Li Qin has gone viral on social media.

Li Qin, a stone painting artist in Fengxian, said she was surprised to see Fang, an, elderly but high-spirited volunteer, during a recent round of nucleic acid testing at her community.

"When I saw the 90-year-old volunteer, I believe Shanghai will definitely win the anti-COVID war," Li said. "Everything can be solved with such spirit. It is just a matter of time.

"I was touched by his bright eyes and high spirit behind the hazmat suit," she recalled. She took a photo of Fang and posted it on her Wechat account.

"I was inspired by Fang and thought I also have the duty to do something," she said. Li then applied to become a community volunteer to assist the grid screening.

Fang concealed his participation in the volunteer work from his children, but they soon found out from media reports and social platforms.

"Now I have to call to ensure them that everything is okay at the beginning and end of my volunteer work every day," Fang said. 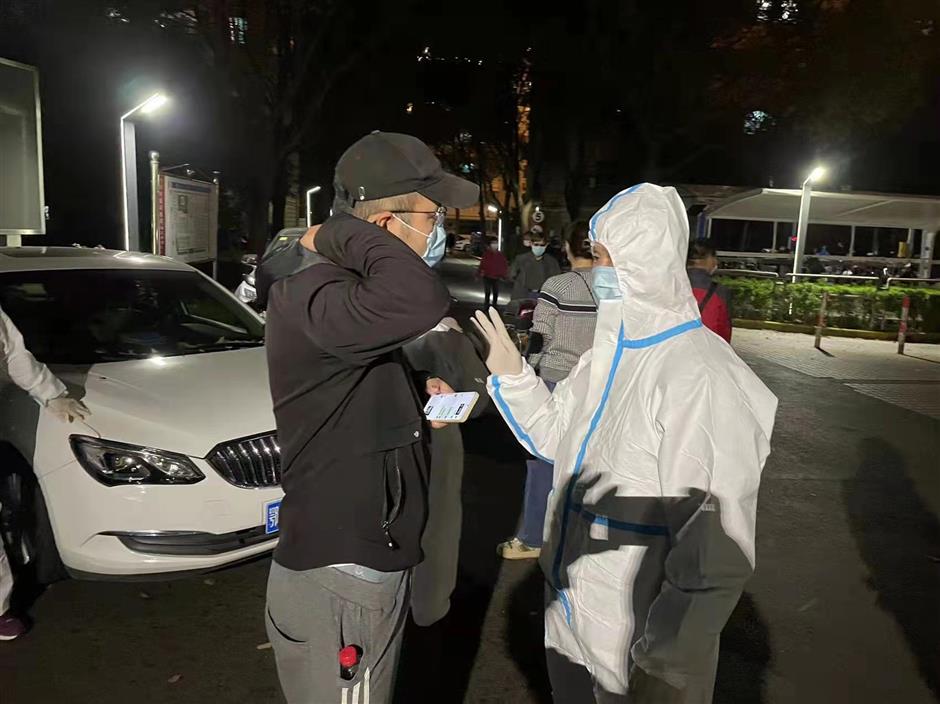 Fang Shanhao explains the quarantine rules to a resident.

Volunteers from local universities have set off around the city to help handle increasing demand for polymerase chain reaction (PCR) tests.

Teachers, students and medical staff from the hospital affiliated to Shanghai Jiao Tong University School of Medicine have actively volunteered at testing sites or communities.

Due to the lack of nucleic acid testing staff during the grid screening in the city, medical students volunteered to serve in the front line and have formed teams to support testing facilities, the school authority said.

After receiving the call for volunteers for PCR testing on Friday night, the school started recruiting immediately and received nearly 300 applications within three hours.

An 80-member team was later formed with proper training and preparation.

In addition, those who live in locked-down communities have used their professional skills and knowledge to serve residents.

They provide medical services and consultation, and help at nucleic acid testing sites.

Kong Qingfang, a nurse at a mental health center, launched a psychological consultation group on WeChat in the residential community and shared tips and gave instructions to residents who are anxious during the lockdown. 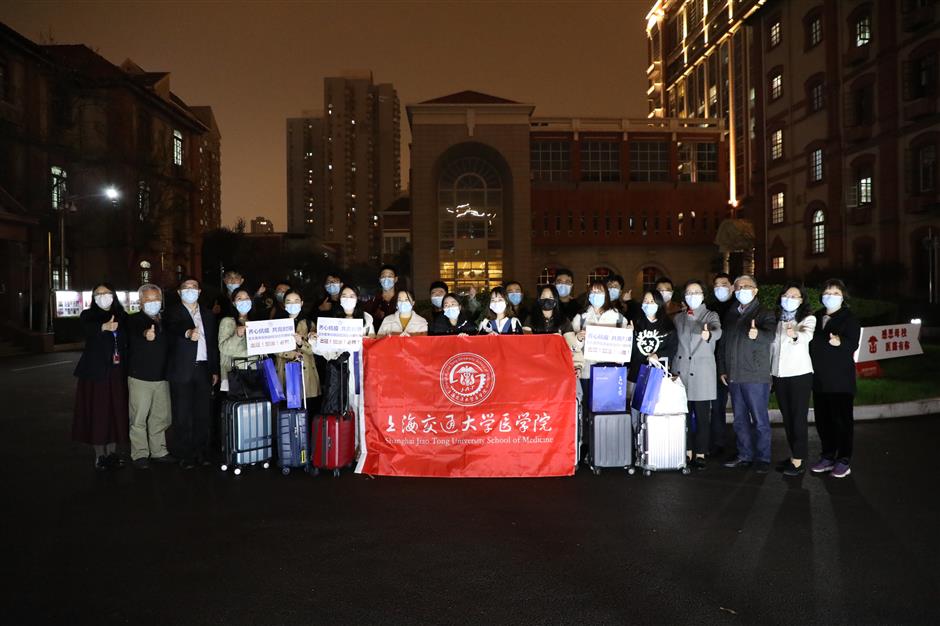 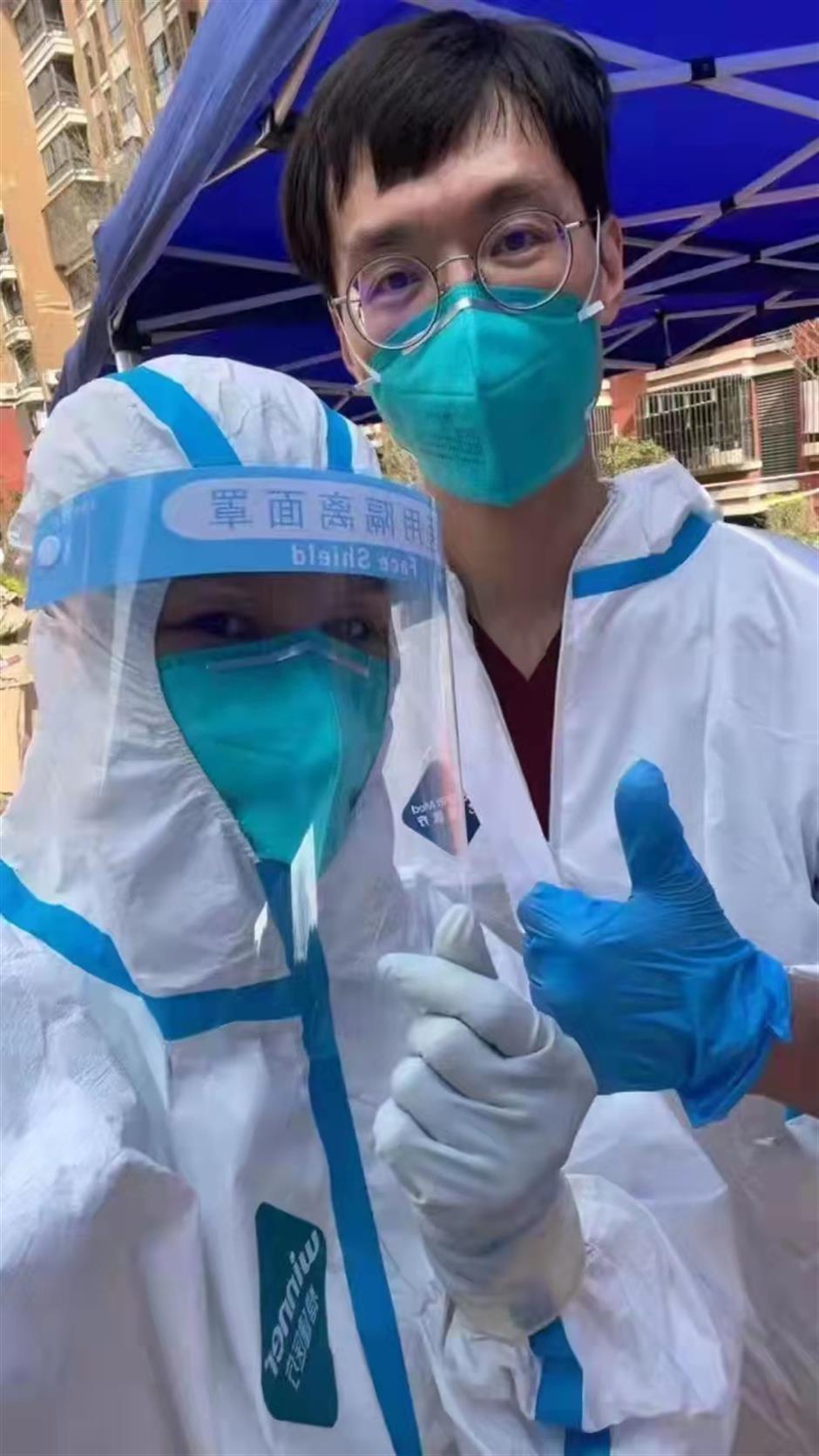 They also volunteer to serve in the community.

The first batch of 68 volunteers from Fudan University headed to Jiading and Qingpu districts as well as the Pudong New Area on Saturday.

As Shanghai is carrying out large-scale screening for COVID-19, the university rapidly called up students familiar with PCR testing equipment. A total of 265 teachers and students responded and registered as volunteers in just several hours.

Led by Lu Lu, vice president of the the university's School of Basic Medical Sciences, the first batch of 68 volunteers hurried off to Pudong, Jiading and Qingpu on Saturday morning to handle the increasing demand for the tests.

"With the resurgence in Shanghai, I was anxious for being locked down on campus," said Li Qingshan, a student from the school. "Seeing the notice calling for volunteers, I registered immediately.

"We have been taught to learn from the sages and serve the society. I hope I can make my own contributions to the fight against the pandemic."

Tan Dan, a doctoral student at the school, packed up her bag and said goodbye to her 7-month baby before setting off.

"I want to do what I can do at this critical moment for our city," she said. "I hope by baby won't have to wear masks soon."

Fifty-two students from the East China University of Science and Technology have also answered the call to support the screening.