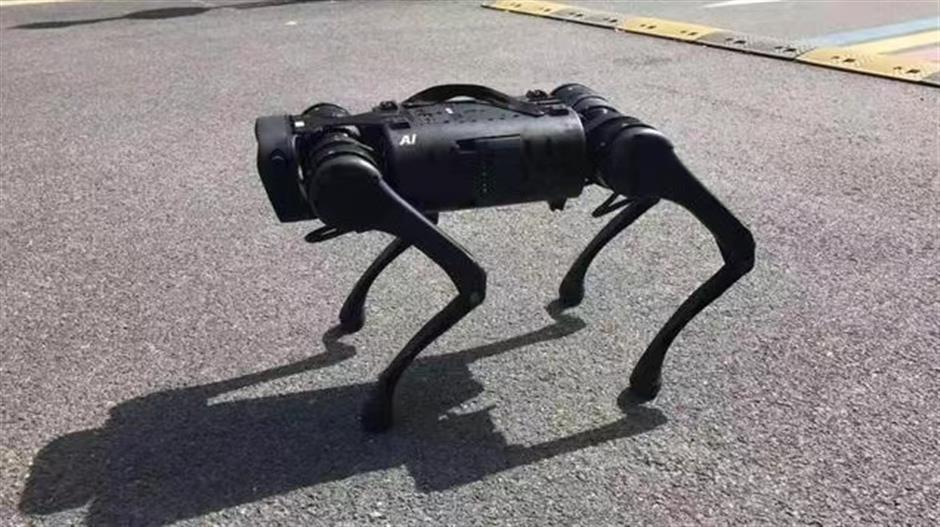 A dog-like robot is patrolling in a Shanghai community for epidemic prevention and health announcements.

Robots used for epidemic prevention in areas such as publicity, disinfection and deliveries are a foretaste of a digital future.

A video of a dog-like robot, which is patrolling a Shanghai community making health announcements, has gone viral on social media.

But more importantly, service robots with similar functions and features are expected to be used in China after the epidemic, to help solve social problems like labor shortages and how to serve an aging society.

COVID-19 is clearly an unfortunate epidemic, but it has been a catalyst for service robot development in China. It has shown how robots help where people are not able or willing to work, such as locked-down and dangerous areas.

"The service robot industry has reached a watershed for rapid scale and development," said Zhang Tao, Pudu Robotics' chief executive. "The epidemic has accelerated digital transformation, and billions of people around the world have realized the value of robots."

Pudu, which launched several delivery robots in March, expects its customer's investment return period will be controlled within one year, with technology and product maturity in the industry.

They will become "necessities" for many companies and families in China in the near future, said Fu Sheng, chairman of OrionStar.

With touch-less service demands in the epidemic and even after the epidemic, service robots market will grow rapidly in China in categories like hotels, restaurants, shopping centers and homes, according to International Data Corp, a US-based IT consulting firm.

By 2024, 45 percent of duplicated works in China will be conducted by AI (artificial intelligence), robot and RPA (robotic process automation), said IDC.

Technology development is another catalyst for advances in the service robot industry, such as rapid progresses on SLAM (simultaneous localization and mapping), radar, sensor and AI-powered system.

This technology can be used in smartphones, home appliances and autonomous driving. That's the reason why tech giants like Xiaomi have invested heavily in robotic development.

According to a plan announced by CEO Lei Jun, Xiaomi will invest more than 100 billion yuan (US$15.6 billion) in research and development over the next five years. The investment include the smartphone maker's expansion into the electric car and robot businesses. In 2021, Xiaomi developed a dog-like robot, similar to the one in the Shanghai video.

The price of the four-legged dog-like robots starts at 9,999 yuan.

A mainstream service robot, which is used for food delivery and making coffee, costs 20,000 to 50,000 yuan, which is acceptable for business clients, according to industry officials.

China-developed service robots have been shown or used in overseas markets, such as World Expo 2020 (held between October in 2021 and March in 2022) hosted by Dubai in the United Arab Emirates and big convention centers in Washington. They showcase advanced technologies and mature industrial eco-system in China.

Here are some of the latest and iconic robots released by Chinese firms. 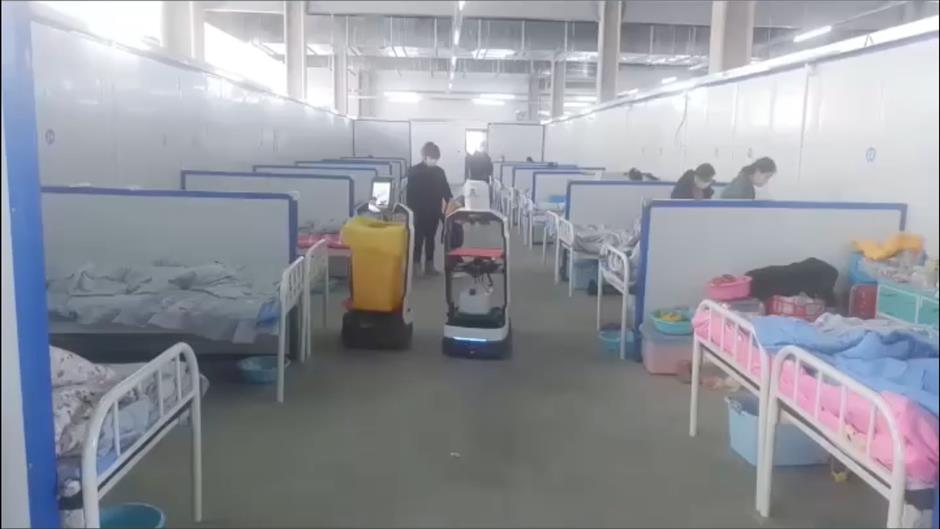 An OrionStar robot is working in a cabin hospital.

Disinfection robots have natural advantages compared with manual disinfection, in terms of safety and efficiency.

Each OrionStar robot can disinfect thousands of square spaces in minutes with a sterilization rate exceeding 99.99 percent. It can be digitally managed with a smart system for various scenes and special setups. It can work for up to six hours between each battery charge.

With AI techs, those robots can have multi-functions like facial mask detection, health announcements, automated navigation, food delivery and automatic obstacle avoidance. Those functions make them useful in other sectors, like hospitals, industrial parks, government halls, museums and schools.

Currently, the robots have been used in cabin hospitals in China, including one in Changchun city in Northeast China. 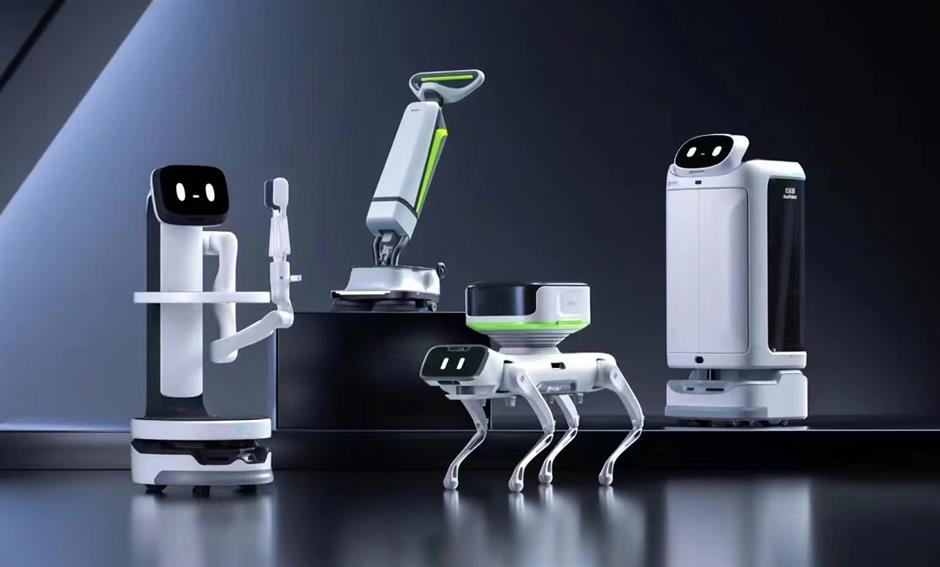 The products include SwiftBot, a versatile delivery robot that reduces human-robot road congestion by 50 percent and increases machine running speed by 30 percent in restaurants. Others are Pudu A1, the first composite robot in the restaurant business and Pudu D1, the first quadruped delivery robot, which has opened up new possibilities of robot applications across various restaurants and commercial environments. 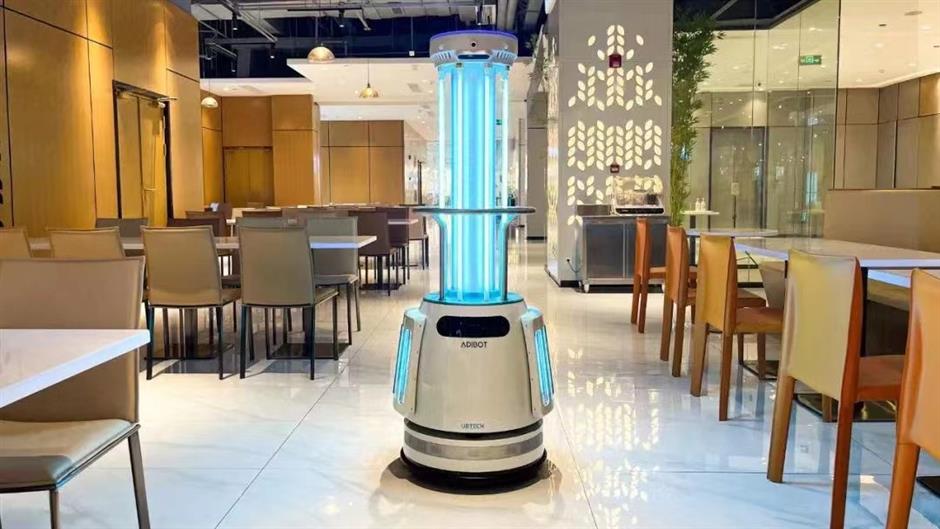 As businesses and schools struggle to reopen and stay open as a result of COVID-19, UBTech offers disinfection robotic system, ADIBOT.

It can disinfect targeted surfaces and air by deactivating the DNA and RNA of harmful pathogens. The ADIBOT system both feature 360 degree radiant light coverage and powerful UV-C disinfection to effectively disinfect 99.9 percent of targeted areas.

Currently, ADIBOT robots have been used in an industrial park in Shenzhen city of South China, a People's Daily newsroom during the Two Sessions held in Beijing last month and the World Artificial Intelligence Conference 2021 in Shanghai. It has also been used in a convention center in Washington.