Taiwanese singer and fitness coach Liu Genghong's (aka Will Liu) home workout livestream on Douyin, China's version of TikTok, has gone viral. Within one week, his number of followers has surged to 36 million, who have nicknamed themselves "Genghong's girls" (as most are female).

Over the past 30 days, more than 100 million people have watched Liu's fitness livestream, with a single live broadcast viewed by 44.76 million, the biggest audience on Douyin in 2022.

"Goodbye fat, hello muscles! Say it out loud with me!" he beckons viewers.

Almost every night on Liu's livestream, he and his wife, Vivi Wang, conduct high-intensity workouts for about 90 minutes in their Shanghai home.

He has followers across the country, from celebrities and influential bloggers to firemen.

"No wonder I always feel the whole building shaking every night after 7:30. It's because my neighbors are hopping with this crazy man," one netizen joked. 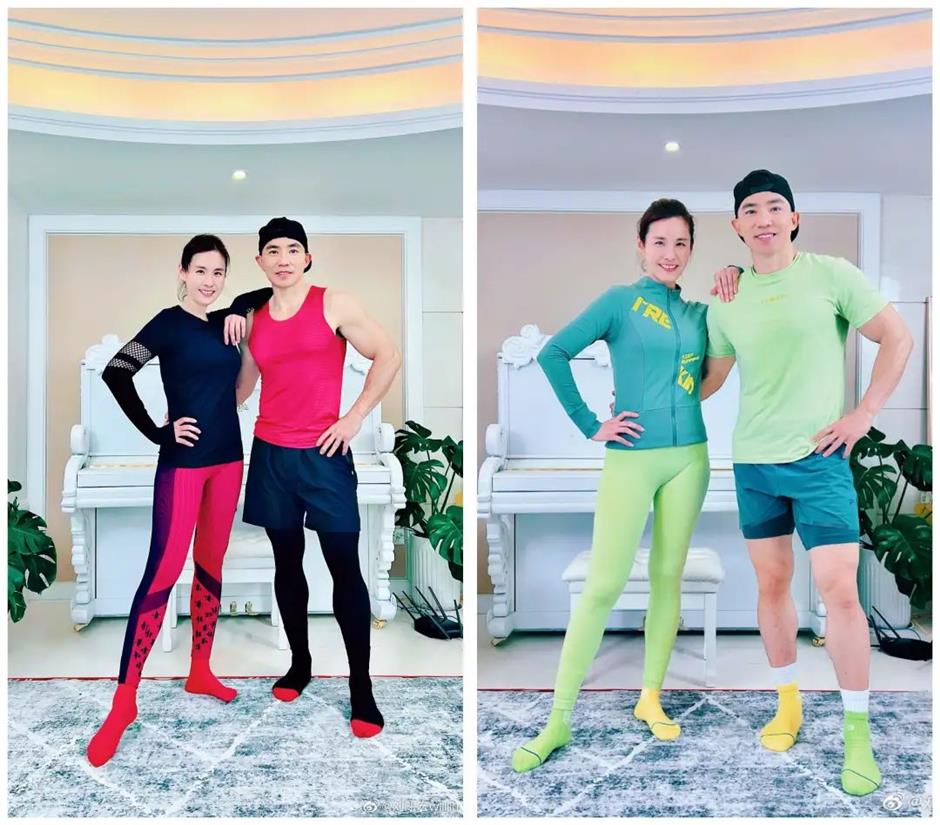 Liu had lived through what he calls "uneventful" stages for years as a singer and fitness coach. His only previous claim to fame is his close friendship with megastar Jay Chou. Liu and his wife have appeared in many of Chou's music videos and movies.

One key to Liu's success is his carefully curated playlist of Chou's songs, often serving as background music.

One of Liu's most popular workouts is choreographed to the song "Compendium of Materia Medica" from Chou's hit album "Still Fantasy." The moves look simple but are too intense for most viewers to follow.

"Next time I see Chou in concert, I will be the one hopping and slapping my leg in the crowd," a Douyin user posted.

Wang, Miss Universe Taipei in 1999, is another highlight of the livestream, serving as Liu's student during the broadcast. Like every woman struggling to burn fat through workouts, Wang is often unable to keep up with her husband. She sometimes flops onto the floor in the middle of an exercise, breathless, exhausted and soaked in sweat. 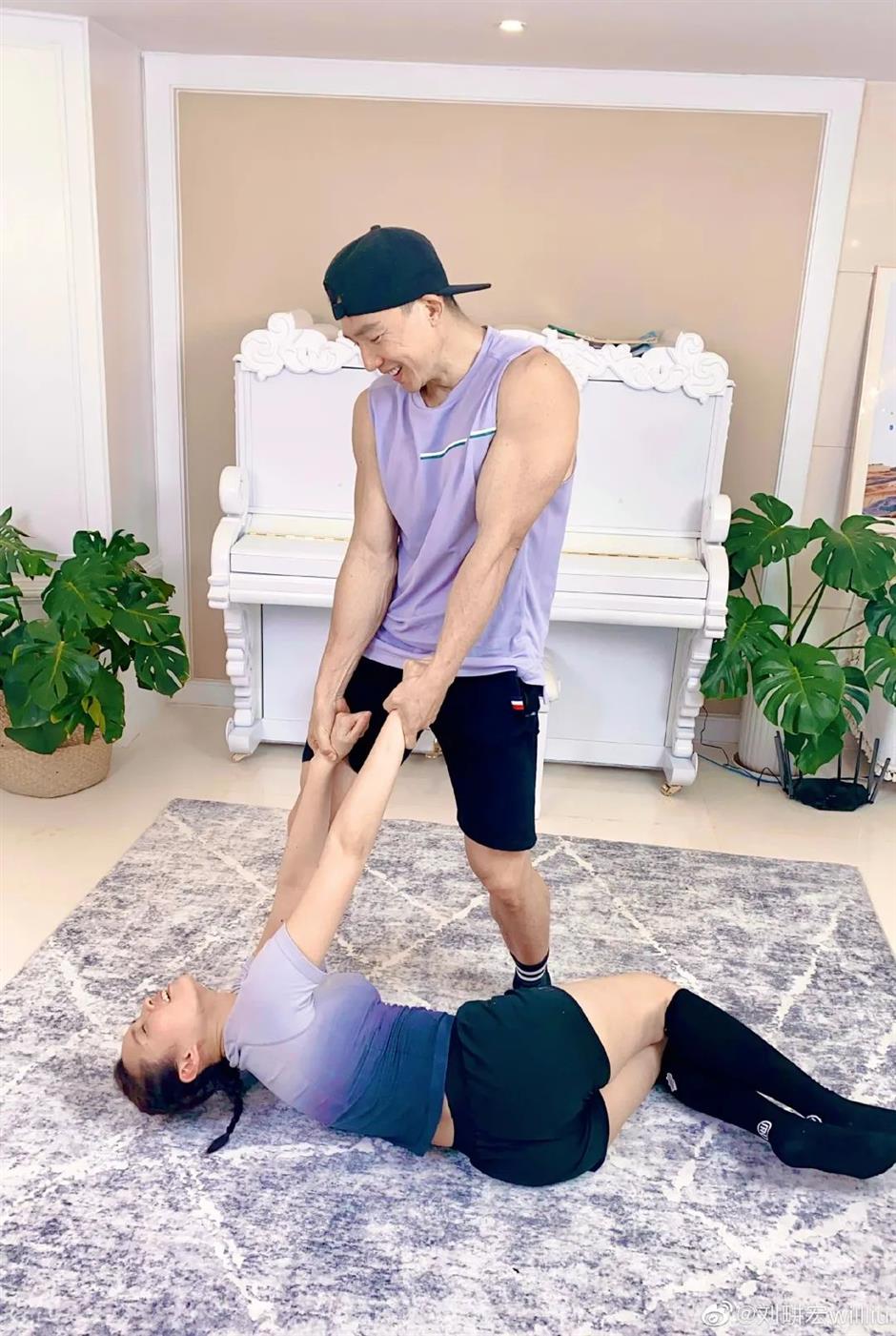 "Leave me alone! I'm dying!" his wife cries out.

"Vivi (Wang), you might need a divorce!" one netizen jokingly posted.

Recently, Liu even persuaded his 65-year-old mother-in-law to join the show. She surreptitiously attempts to slip out of the room, but her son-in-law brings her back – adding to the show's lighthearted appeal.

Liu has the ability to socialize and interact with the audience. He never stops encouraging people and is adept at chanting limericks and sing-song verses to motivate his dog-tired followers: "Hang in there! Don't go! 90 minutes passes quickly!"

Earlier this month, Liu's fitness livestream was suspended because his body-tight outfit "showed off how big his chest is." He got around that, however, with his sense of humor. The next day, the couple wore down jackets during the broadcast, turning the incident into an entertainment headline -- which helped him gain even more followers. 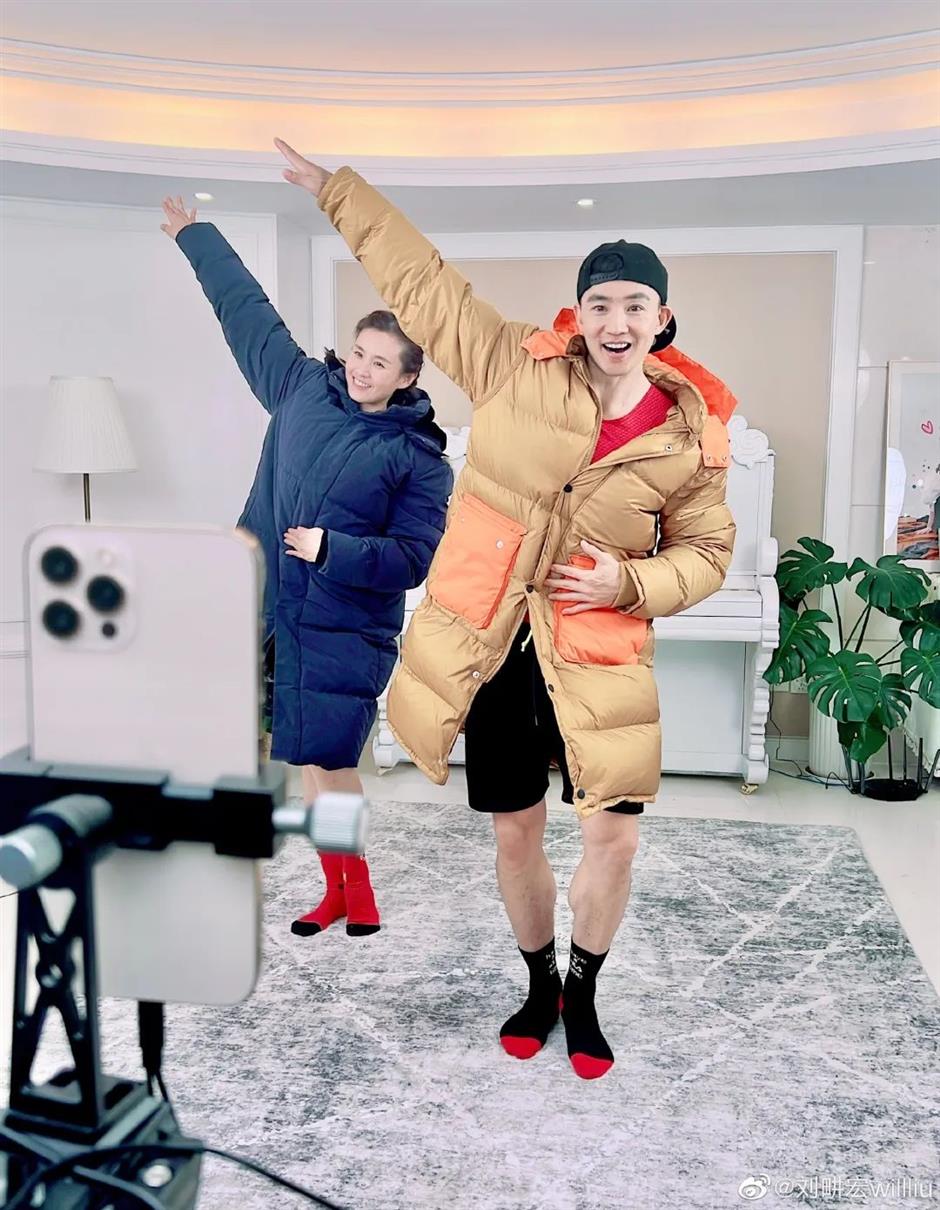 Liu's rise to stardom is a reflection of China's burgeoning fitness industry. In 2021, 300 million Chinese exercised on a regular basis, tops in the world. However, the average annual expenditure of this group was 2,596 yuan (US$396), far lower than the 14,268 yuan figure in the United States.

"Fitness-oriented programs are mushrooming on various social media platforms, which shows people's increasing desire for good health and sports," said Hai Dong, a senior researcher at the Sports Research Institute of Keep, a sports technology platform. "It's a great opportunity for the fitness industry.

"Liu has been phenomenal," he pointed out.

"Whether he's a passing fad or not, the trend of national fitness is sure to come with huge market potential, which should be supported by products and services that really focus on user needs and provide a positive user experience."